I Used Tarot Cards to Plan My Dinners for a Week

Life is full of decisions to make.

The toughest is choosing what you'll have for dinner.

With so many options out there, deciding on just one can sometimes be a miserable and tiring occasion.

Thanks to artist Josh LaFayette, that problem has been solved with the help of his Food Fortunes.

A deck of 78 tarot-like food-themed cards, figuring out what's for dinner has never been easier. 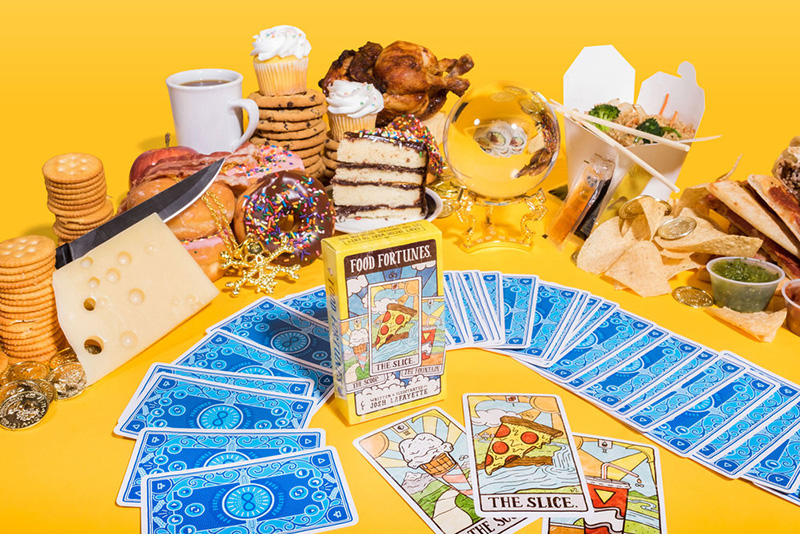 Divided into Trumps, Mains, Sides, Sweets and Drinks, you can effortlessly plan a full-course meal with the help of these magical cards.

I'm not one to go all out when it comes to dinner. I like my dinner, as with most of my meals, to be two things—cheap and convenient.

I decided what would work best for me is if I pulled a single card from the deck each evening to determine what I would be eating that night.

Though few, I did set some rules for myself before I began this experiment.

They were as follows:

Scroll below to see how my week of using Food Fortunes turned out.

I began by shuffling the whole deck and then pulled my card. First I pulled cornbread. Because I wasn't sure where I could get vegan cornbread without having to make my own, I pulled a new card. Yep, already broke a rule. I then got the quinoa card and was not happy about that, so I pulled again. After taking every single Drinks card from the deck, I decided it'd be best to separate out the Trumps and the Mains from the rest of the cards to only choose from those. Listen, rules were meant to be broken. 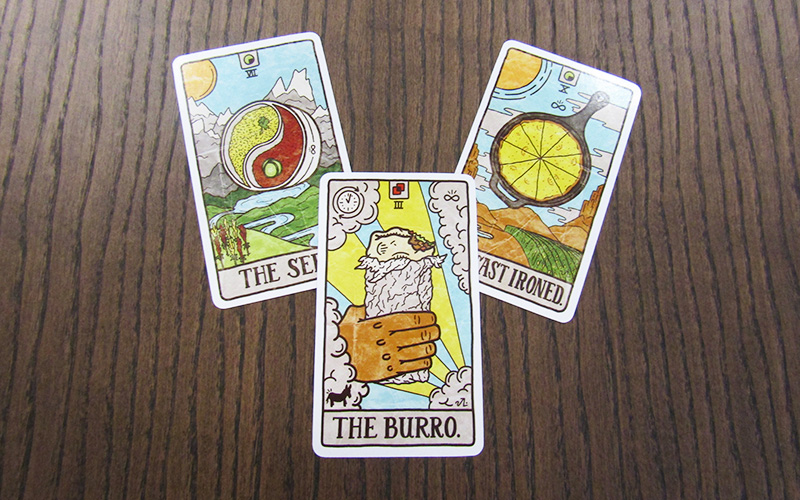 Once I separated the cards, I gave the deck another shuffle and picked out the burrito. I was A-OK with that option, so I walked on down to Chipotle and ordered myself a sofritas burrito with white rice, black beans, hot salsa and guacamole.

I was thoroughly satisfied with my food fortune and eager to see what other magic would come from the cards.

On the second day, I continued to only pull from the Trumps and the Mains. I did add a few sides to the mix, which were mashed potatoes, salad and mac & cheese.

When I finally chose a card after shuffling them for a hot minute, I picked out ramen. I was not in the mood for this dish, especially because I would have to drive a bit to a ramen joint that had a vegan option. 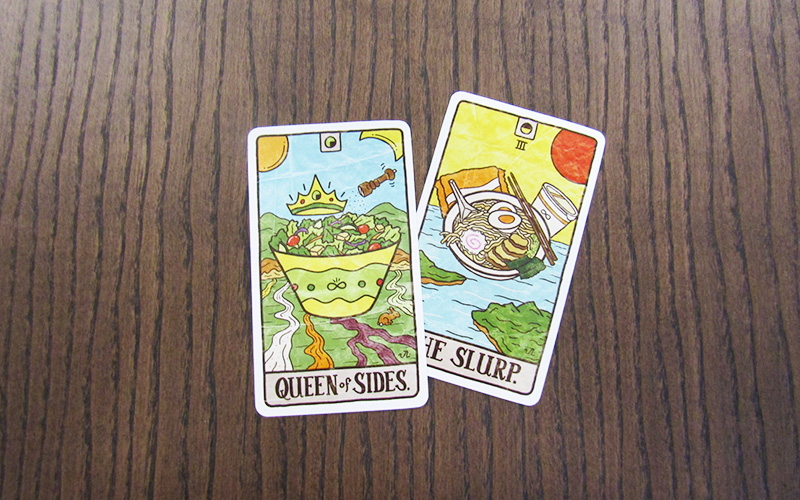 Breaking the rules again, I pulled another card. It was for salad. Normally I wouldn't be down, but salad seemed like a refreshing and healthy option. Got to get summer ready, you feel me?

I drove down the street to Whole Foods and made my salad with leafy greens, tofu, Chinese noodles, jalapeños and drizzled it with some avocado vinaigrette.

It wasn't the best salad I've ever had, but it wasn't the worst. Okay, it was close to the worst. I don't know what I was going for, so it just sort of turned into a mess with the hodgepodge of toppings.

Nevertheless, I continued on with my experiment.

The third day was the only time I pulled one card and actually liked the outcome.

I had chosen a BLT, which sounded incredibly appetizing at the time. Once again, I drove on down to Whole Foods and ordered their vegan version of a BLT (my fave sandwich on their menu) from their sandwich shop. 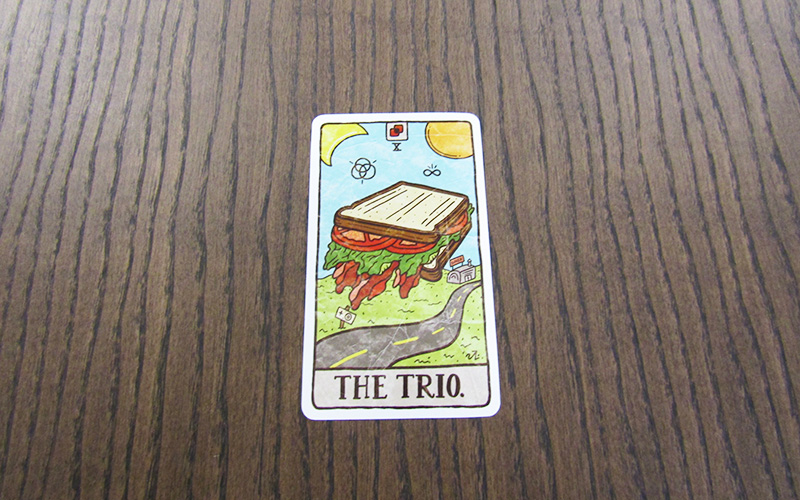 I devoured the bad boy the minute I got home.

My endeavor was getting more and more delicious by the day.

When dinner time rolled around, I wasn't all that hungry. I initially pulled chicken tikka masala from the deck, but didn't want to bother running around town to find a vegan version of the dish, so I drew again.

On my second draw, I pulled falafel and was down with that. So to Whole Foods I went. 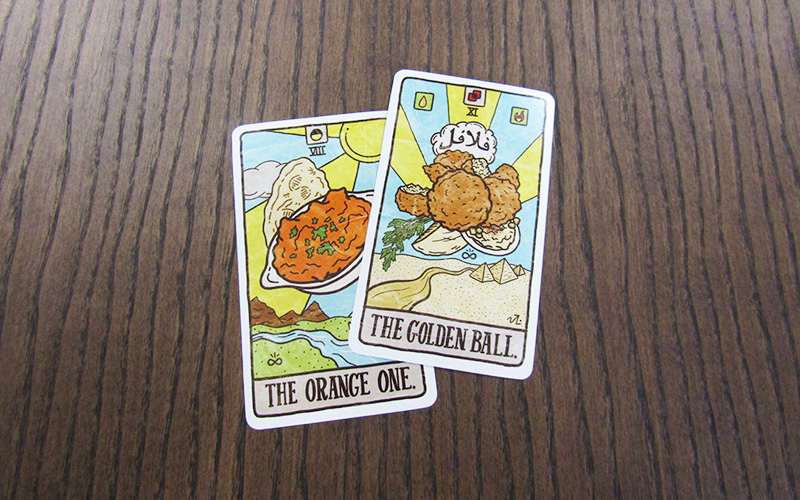 I stuffed a container full of hummus and pita bread along with a healthy heaping of falafel. It was just the dish I needed to end the day.

By day five, I was over this whole card game. Because I still had an ample amount of leftover falafel, hummus and pita bread, I decided just to polish off the rest.

I ended up eating plenty of Oreos throughout the day, too… whoops!

I was pretty busy on the sixth day of this experiment, so I didn't really get a chance to use my cards.

I went from volunteering to checking out Eeeeeatscon with my coworker Dahvi.

You better believe I ate my weight in food at that festival. My favorite dish there was this vegan ramen from Ramen Hood, which I slurped down in less than 30 seconds.

I probably could've used the cards while I was there, because I carry them with me in case of emergencies, but the thought didn't even cross my mind until the event was over.

The final day had arrived, and I was so happy. I was beyond over letting a deck of cards decide what I'd eat. I liked having that power. 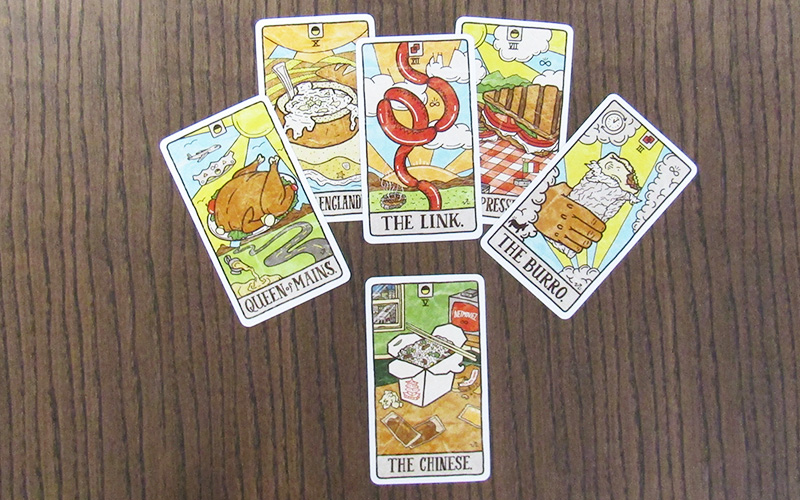 I liked that option the best, so off to Whole Foods I ventured. I ended getting eggplant tofu and Chinese green beans with my fried rice to stuff my face.

It was the perfect dish to end this experiment with.

After my fun with Food Fortunes, I discovered that A) I go to Whole Foods way more than I should, because their food there is freaking expensive and B) I'm really picky when it comes to food.

Because I'm usually pretty decisive, I never have a problem choosing what to eat. I know what I want and I go get it, which is why the cards might've been as helpful for me.

If you can't make decisions, especially when it comes to food, Food Fortunes are your best bet. They'll definitely come to your rescue if you're in a serious bind.

Using Food Fortunes isn't the strangest thing I've done when it comes to food. That title would probably go to trying Pickle Pops. HERE's what I thought of the icy treat.