Forever In Your Mind Talks X Factor And More!

On season 3 of The X Factor USA,  singers Emery Thomas Kelly, Ricky Garcia and Jon Klaasen were assembled into the awesome new group called Forever In Your Mind. 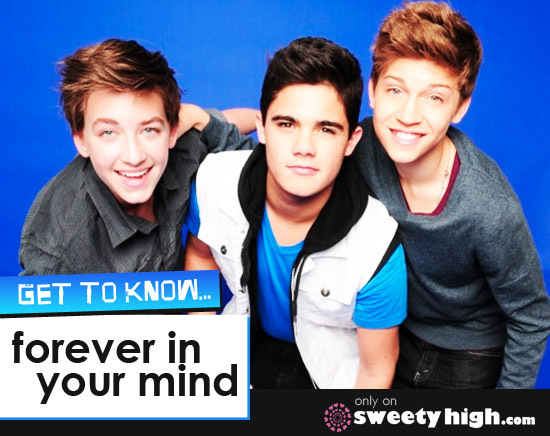 Since then, the boys have released a music video for their hit single "She Lights The World," as well as their holiday song "This Feels Just Like Christmas." Check out our exclusive interview with the band below!

Sweety High: What was it like to believe you had been eliminated from The X Factor only to be brought together as a group?

Emery: At first, it wasn't the best feeling. Our emotions were all over the place and then they put us three friends in a group together, we literally couldn't believe it.

Jon: I mentioned on the show how it felt like my heart had been ripped out of my chest. We went from feeling really down to absolutely ecstatic in such a short space of time.

Ricky: It was crazy. I don't think there's really a way to explain how it feels to have your emotions go from one end of the spectrum to another.

Emery: When we were told we would be in a group together, wow, we'd spent time at the auditions getting to know each other and then were told we'd have to sing together… it really was like a dream come true.

Sweety High: What role do you each play within the group ? How close have you become as friends since then ?

Jon: Ok ok, aside from our superhero alter egos I think we all have a great mixture in the group. Emery is really outgoing and confident, Ricky is really laid back and pretty quiet and people tell me I'm the funny one.

Ricky: Jon has two sides to him, the serious professional and the comedian. Emery is definitely a front man, he's very confident.

Emery: I'm a New Yorker so my personality seems to come across as strong, I'm a confident guy though for sure.  Jon is definitely the comedian, he's forever setting up pranks or coming up with funny versions of our songs!  Ricky is the secretive one everyone thinks he's really quiet but when you get him behind closed doors he's a crazy man.

Ricky: We're all really like brothers now, we've spent so much time together since getting off the show.

Sweety High: How did you come up with your band name ?

Emery: The X Factor named us.

Sweety High: What was it like to get to perform at Digifest ?

Jon: It was so awesome! Digifest was our first performance since we left The X Factor and it felt so good to be back on stage.

Ricky: Sensational. That crowd was pumped up!

Emery: Amazing. We met lots of fans which was cool, we love getting to know our fans. And being on stage with all those girls screaming at you can't be a bad thing can it? Ha ha!

Sweety High: What was the inspiration behind the song "She Lights The World?"

Ricky: It's about a girl that basically lights up your world.

Jon: It's a song that was written by Allen Copeland & Charlie Midnight.  It's about that girl that completely enlightens you, everything she does makes you feel good.

Emery: You know when you meet that girl you can just have fun with, don't have to worry about what she's thinking etc.? She Lights The World…

Sweety High: What was it like to film the music video for that track ? Whose idea was it to film in front of those iconic streetlights at LACMA ?

Emery: The video director thought it'd be a great location for the shoot, and boy was he right!

Jon: "She Lights The World" was the first music video we did, it was definitely a learning process but I think it came out really nice.

Ricky: The LACMA lights were so cool, when we weren't shooting we were playing hide and seek in them.

Ricky: We also tried climbing the lights but kept getting told off by the security.

Sweety High: What was your experience filming the video for "This Feels Just Like Christmas"?

Ricky: We rented a cabin up in Lake Arrow head and the crew had decorated the house in lights, put a christmas tree up and put fake snow everywhere.

Jon: That shoot was so much fun, we basically got to sit in this really cool cabin, eat toasted marshmallows and go sledding. Such a hard life we have!

Emery: The sledding was so much fun, we kept running into each other and falling off the tubes.

Ricky: We were covered in bruises after that shoot.

Sweety High: What are some of your Christmas traditions ?

Emery: My family have the "Feast of the Fish" tradition on Christmas Eve at my Granma and Grandpa's house. I love spending time with my family over the holidays but really don't like fish so I look forward to midnight when we can eat 'normal' food again.

Jon: My family spend Christmas in Tennessee with my aunt and uncle and then we travel to my grandparents' house.  We always get these Little Debbie Christmas tree cakes to celebrate the birth of Christ.

Ricky:  My family always decorate the tree and the house together. We decorate cookies and a gingerbread house. Oh and we also get to open one gift on Christmas eve.

Sweety High: What's next for the group ?

Jon: Recording more songs for our album and touring hopefully.

Ricky: We have big plans for for the band in 2014. We are hoping to finish up our album up, we've recorded 7 songs already for it. Maybe go on tour. That would be cool!

Emery: Oh yeah we'd love to go on a tour too at some point.

Sweety High: Is there anything else you would like to add ?

Jon: We love and appreciate our fans so much, we're very grateful for all your love and support!

We look forward to more from Forever In Your Mind soon!

Love The X Factor? Be sure to join us at Sweety High for all of the latest updates!