Is social media getting the best of your pal?

We live in a world consumed by the internet, but that doesn't mean it should take up all of you or your friends' time. Sure, being engaged on social can be entertaining—it's a great way to keep up with your fave celebs, brands and friends. But as you probably know, there's a dark side to social media, too, which can lead to depression, self doubt, insecurity and envy.

If you have a pal who's way too into scrolling for their own good, here's how to deal. 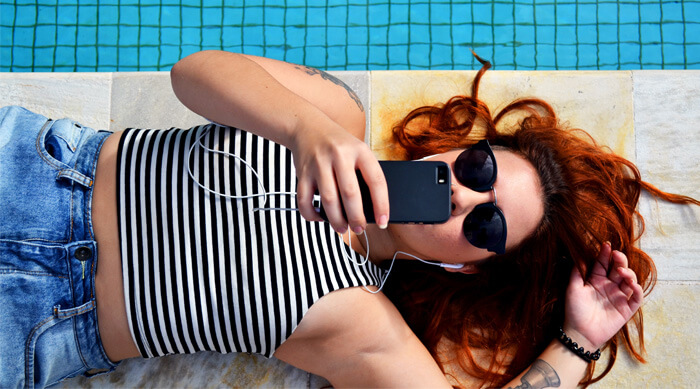 There are so many apps these days that can help you quit your social media habit, but if your friend doesn't seem to want to quit on her own, start asking to compare weekly screen time stats. Chances are, she'll log many more hours than you, so it's an easy way to send a semi-startling wake-up call.

The easiest way to make someone not feel defensive is to get on their level. While you might not be as consumed as your friend is with social, you're probably no angel either (because TBH, it's tempting to sit there and scroll). Sit them down and have an open conversation with them about it. Say you're worried about how much both of you spend on social and think you should collectively scale back.

Everyone likes a challenge, right? Get your entire friend group in on lessening social media time by starting a screen-free day. It might sound crazy, but it actually can be really fun. You can start a note chain that you pass around throughout the day to communicate like we did in the olden days, and then in the evening, plan an activity or schedule a group phone call. Whether it's a group study sesh, a home-cooked meal or movie night, bringing your friends together will be so much fun they won't even want to reach for social.

DMs and Snaps are basically taking the place of texting, but why open an app just to send a message? Instead of communicating through social, which is a trap to spend more time on the app, start a group chat or even pick up the phone and call. It's fun to talk to people and hear their voice, promise.

Another easy way to get your friend hooked on something else? Get them hooked on someone else. Play matchmaker and set your friend up on a date with someone you think they'll be compatible with. There's nothing like budding love to keep you on your toes and off your phone.

But while we're on the topic of social, make sure you're not posting one of THESE types of photos on your deed.