The boy band Full Circle may not be a household name just yet, but given their vocal talents and choreography skills—plus a few really big things on the horizon—we have no doubt it won't be long before that happens for them.

The five-member band consists of Jagger Moon, James Herron, Sean Garrity, Jason Pieters II and Shane Davis, built on existing friendships and a shared love for music, and it shows in everything they do together. Their self-choreographed volumetric capture music videos are unlike anything else we've ever seen–and they're just getting started. We got the chance to hop on a Zoom call with the boys to talk about everything from their brand new single "ANYTHING" (out today) to their musical influences and what sets them apart from today's boy bands and so much more.

Sweety High: Can you each introduce yourselves, and explain your "role" in the group?

Jagger Moon: I'm Jagger, and I would say my role is I'm the dad. I'm the handler. I have to put people straight sometimes.

James Herron: I'm James, and I guess I've been given the "shy guy" title. I'm just trying my best to stay positive and share positive vibes.

Sean Garrity: I'm Sean, and everybody would say I'm the deep thinker, because I'm known to think deep.

Jason Pieters II: I'm Jason. I think that I'm mischievous and kind of the "bad boy," you might say. I'm very adventurous.

Shane Davis: I'm Shane, and I'm definitely the joker of the group. I like joking around. 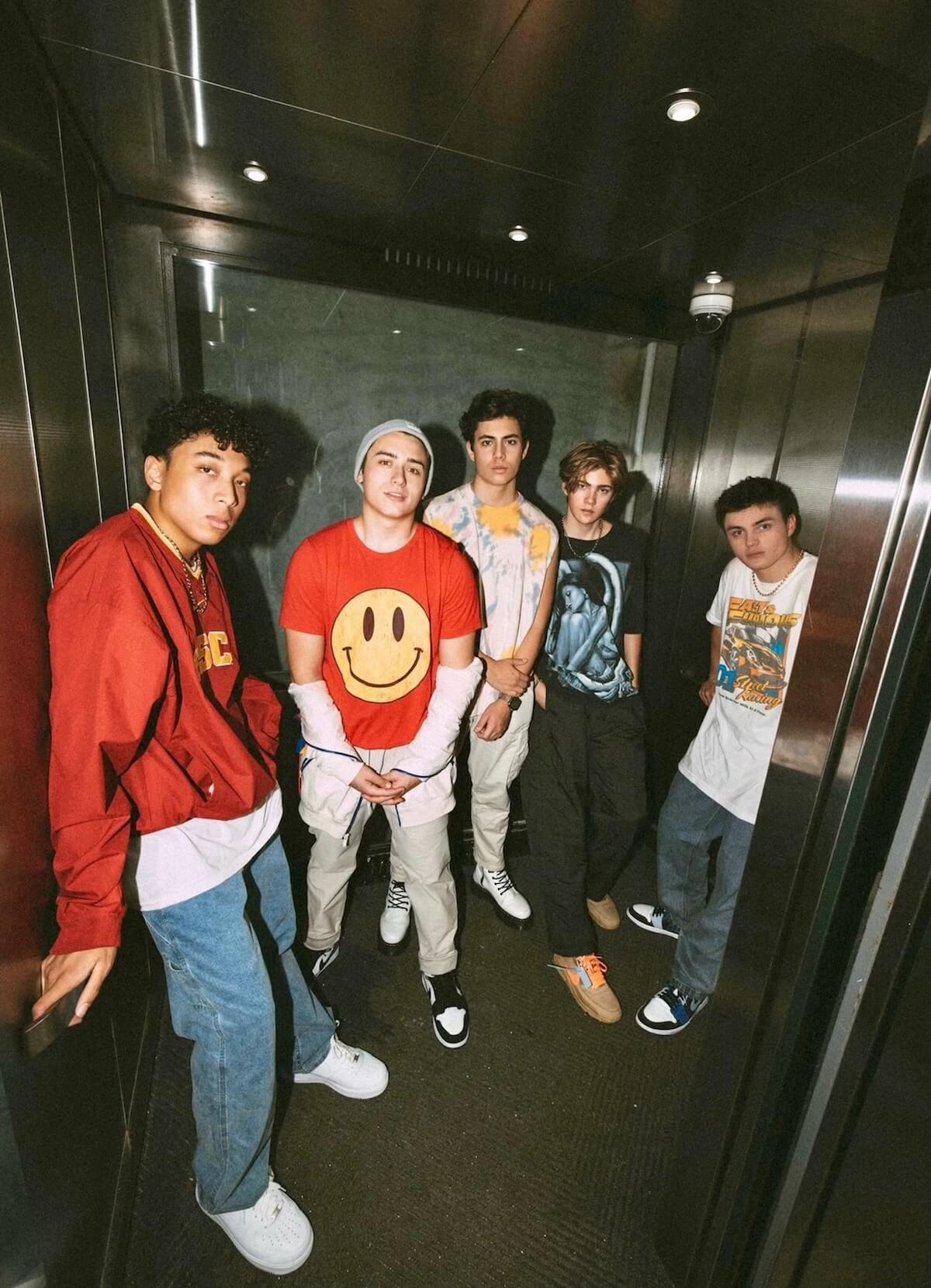 SH: What does the band name Full Circle mean to all of you?

Jason: It has to do with how we became a group. Me and Sean have been best friends forever, so when I got the audition to be in the group, I brought Sean with me. Sean knew Shane from a different job he did with him back in the day, so he brought Shane. I knew Jagger from a different dance job, so we became friends, and I brought him along with me on this, too. And Sean and I have both known James forever. That's why we call ourselves Full Circle. It's just one big full circle moment.

SH: What can you tell us about your new single "ANYTIME"?

Sean: The song "ANYTIME" is talking about how, in this relationship, you're making yourself available "anytime." One of the main lines is "I'll be there in five, four, three, two, one." That's just saying, "Yo, if you call me up, I'm there. You need anything, I got you."

SH: What are some of your favorite lyrics from the track?

Jagger: I think it's cool whenever we bring in the "five, four, three, two, one." That comes in a couple of times, and specifically with Jason's part, the way we put it in there is really cool. I think Jason's part is my favorite part of the whole thing.

Jason: It's my favorite part too. [laughs] It's, "Girl, you're special, you're the one." And that's kind of how we start the "five, four, three, two, one," sneaking it in there. I love Jagger's part, too.

James: James's is good. I like James's part! [laughs]

Jagger: There's also a part in Sean's section where there's a little ad lib of him going, "Link up, link up."

Sean: I think my favorite line is, "Like a Cuban diamond chain, we link up." Because then it goes into the ad lib, and it's pretty dope. 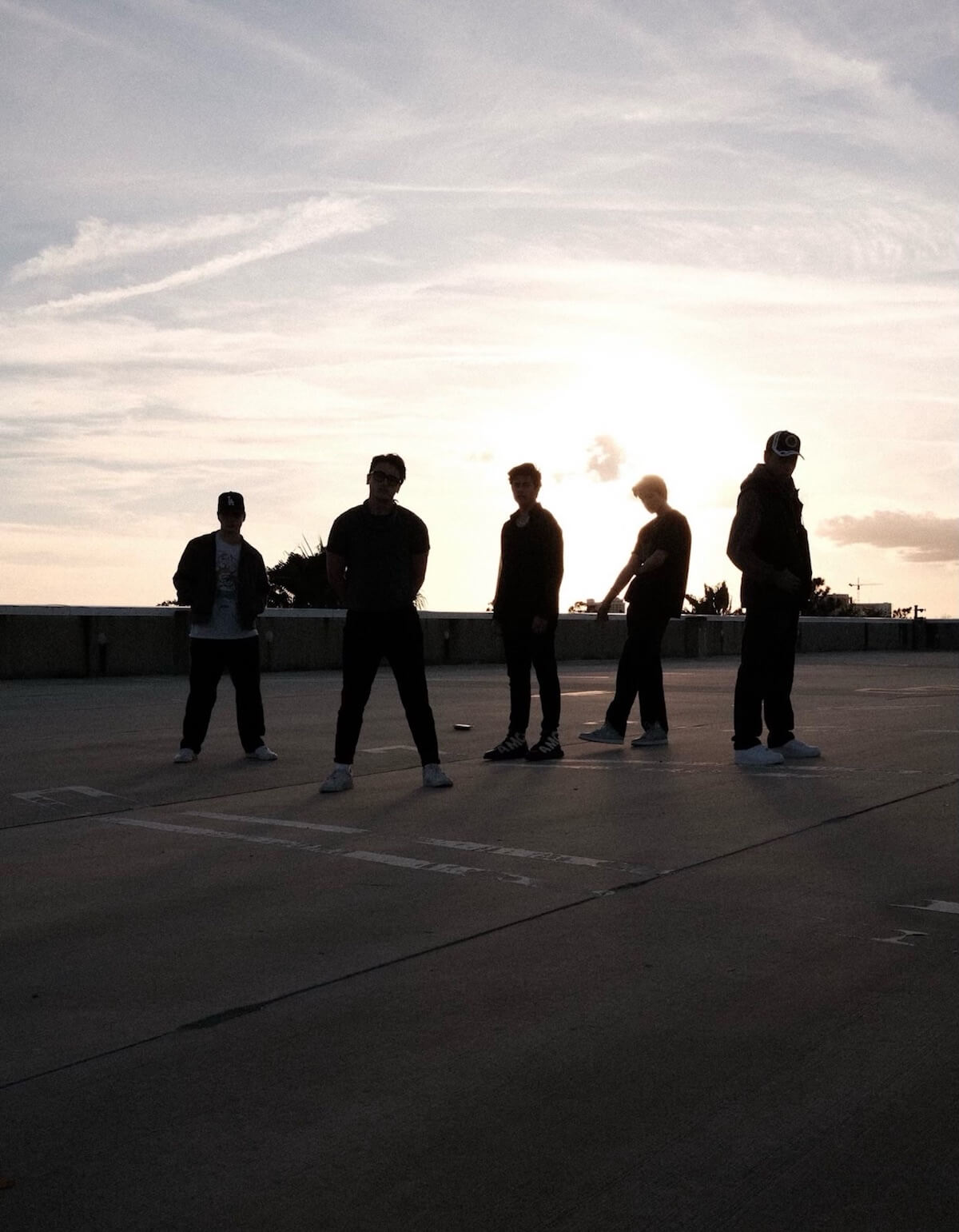 SH: We're already anticipating some incredible choreography from the music video. What can we expect from this one?

Jagger: Personally, I think it's our best choreography yet. For each song, we've had our own choreography for our own sections, and it's been very much our own styles, and they didn't really fit together if you tried to do it all at once, but I think if we were to do this as a live performance and do the song all the way through with the choreography, this would be the one that would fit all together and blend very well. We all just really liked the song. We were very motivated to come up with it. For me, at least, with "Don't Miss," I couldn't really wrap my head around it. I didn't know what to do right away. But for "ANYTIME," [snaps fingers] it was like that.

Sean: There was a lot of good musicality in this song, and especially the play on words with the "five, four, three, two, one," that allowed a lot of dancing. Everybody's part had different musicality, but like Jagger said, it all fits together well.

SH: How long does it take to learn those kinds of moves?

James: I'd say usually it takes us about three, maybe four hours. Choreographing it takes about an hour, I'd say, and we all come together and teach each other the parts. 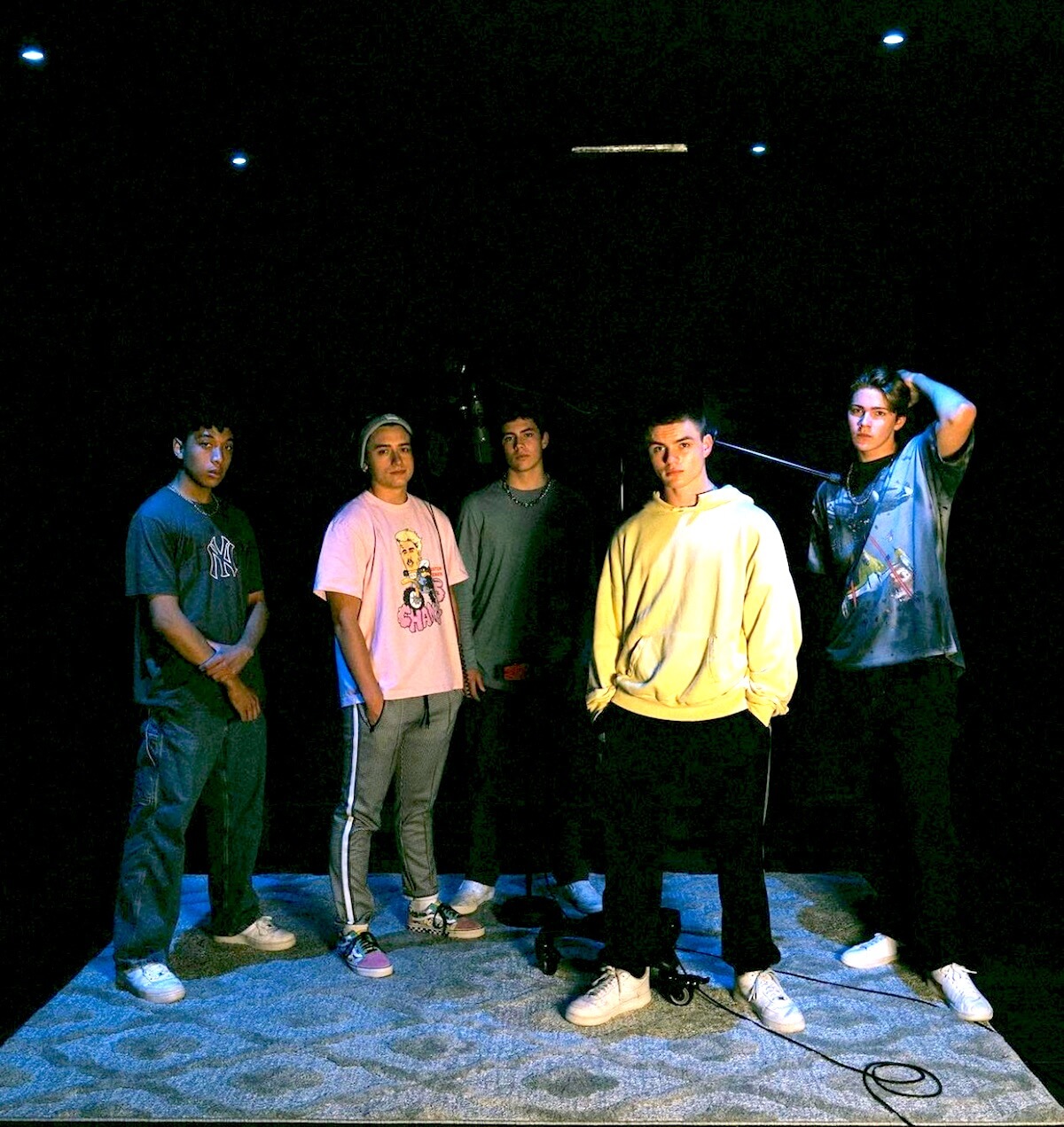 SH: So you do all of your own choreography?

Jagger: Yes. At the beginning, we had some help from this guy named Anthony Kin, who's a big choreographer, but he's really busy because he runs a competition dance studio, and they were in the middle of comp season. We all dance, so we were like, we got this. We can figure it out.  For the past couple of songs, it's just been us doing the choreography, which has been really fun.

Sean: It's been a really cool part of our artistry, because now the choreography can be another representation of who we are.

SH: How long have all of you been dancing?

Shane: We've all grown up dancing and love it. For me, it's been about five years.

Jason: I was 9 years old when I started dancing, so about nine years. 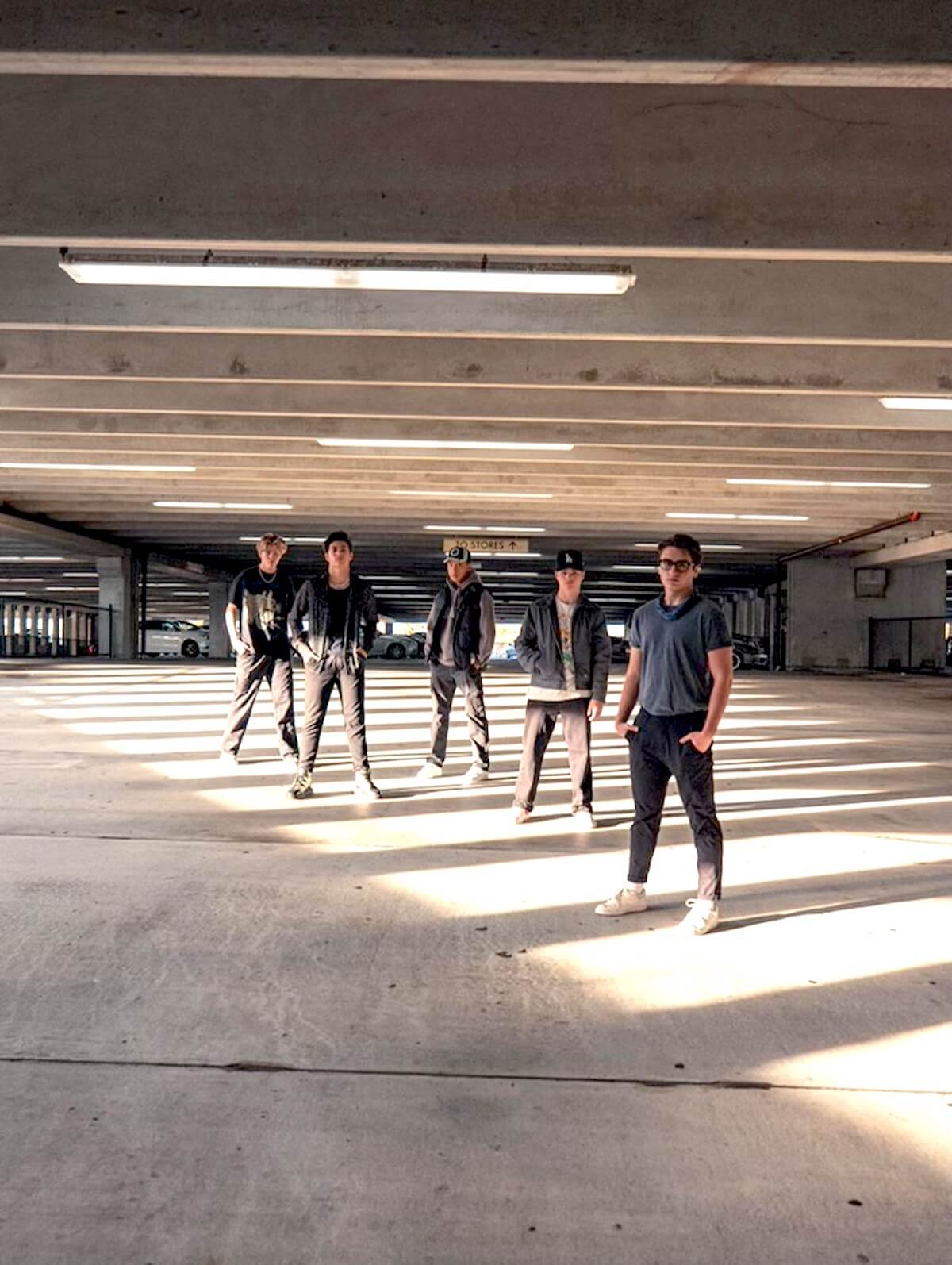 Also read about: NOTD Dish on Collaborating With kenzie on Latest Single 'The Worst Thing'

SH: With the band's full-package singing and choreography, it really hearkens back to classic bands like *NSYNC and the Backstreet Boys, as well as newer ones taking the world by storm like BTS. Why is that aspect of performing important to you?

Jason: It's really important to us because it shows the difference in artistry. Now that we're taking over the choreography for our own videos, that's something that's really different, that not a lot of people see. The fact we're able to do the choreo in general is really cool. It's a dope thing we have as a group.

Sean: It's really special because you're not only hearing us, but you're seeing us, too. When we're singing, you're also seeing what we bring to it, in our visual representation.

Jagger: Nothing against the boy bands that stand and sing and don't usually dance! I love One Direction. Directioner all day, baby! But I think it's just really special to see a group of people dancing together.

SH: What would you say sets you apart from the other boy bands out there right now?

Jason: We're working with Anomaly Create in conjunction with Tetavi, using their volumetric capture studio, which sets us apart, because we can eventually go into the metaverse. We're filming a few music videos in the volumetric capture studio, which is really cool. I've only seen a few people making their way into the metaverse, let alone using the technology we're using.

SH: Who would you say are your biggest influences as a group?

Jagger: For bands, at least—and they're so completely different—I'd never compare us to this band or say we're anything close to how great they were, but The Beatles are a very big inspiration for me, at least as a group. They were everything. If we can ever achieve just a sliver of their greatness, that would be amazing. And we're completely different. They did their instruments, and we are more performance-based, but to get as far as they got would be amazing.

James: I draw inspiration from Michael Jackson and Bruno Mars. Growing up, I listened to a lot of Adele. I think she's one of the many reasons I'm a singer.

Sean: Like James said, we all collectively draw inspiration from Michael Jackson, especially growing up as dancers. At least for me, he was a huge inspiration. He wasn't just a singer and artist. He was a performer and entertainer. In terms of recent artists, I'd say Billie Eilish.

Jason: Not to beat a dead horse, but Michael Jackson's a big one. Like they've said, he's an all-around performer. It wasn't just about the music or the dance. His artistry overall was amazing. I love Justin Timberlake, too, because I feel he's also one of those people who branched out into acting, not being strictly a musician or a recording artist. He's done comedy, been on SNL, all of these other great things. I also grew up listening to Justin Timberlake and Bruno Mars. Those two are great.

Shane: I'm surprised no one's said this yet, but Justin Bieber.

Shane: Group-wise, *NSYNC, I love Bieber, Bruno. Silk Sonic, love what they're doing.  We all collectively have similar tastes.

Jagger: We were making a playlist last night, and there were so many of the same artists and songs just over and over and over again. I texted [our manager] Jon and I was like, do you need me to switch up my songs I put on the playlist so there's not that many of the same artist? And he was like, "Yeah, can you please do that?" So we all have the same vibe of people we look up to and listen to, which I think works well with the group. We all have similar tastes.

Jason: I think it's great because a lot of the people we look up to are the people and artists we want to emulate. Those are the same artists that have been so impactful in the entertainment industry overall. They don't just sing, they don't just dance. They do everything. Music videos, acting. We all want to be like that. We want to be artists. That's why we look up to similar people. We all get what they were doing.

Sean: That's one way we have a chance, is we have this volumetric captured content, that we can bring this new wave of artistry—the new way to consume the "full circle" idea. It's gonna be cool. 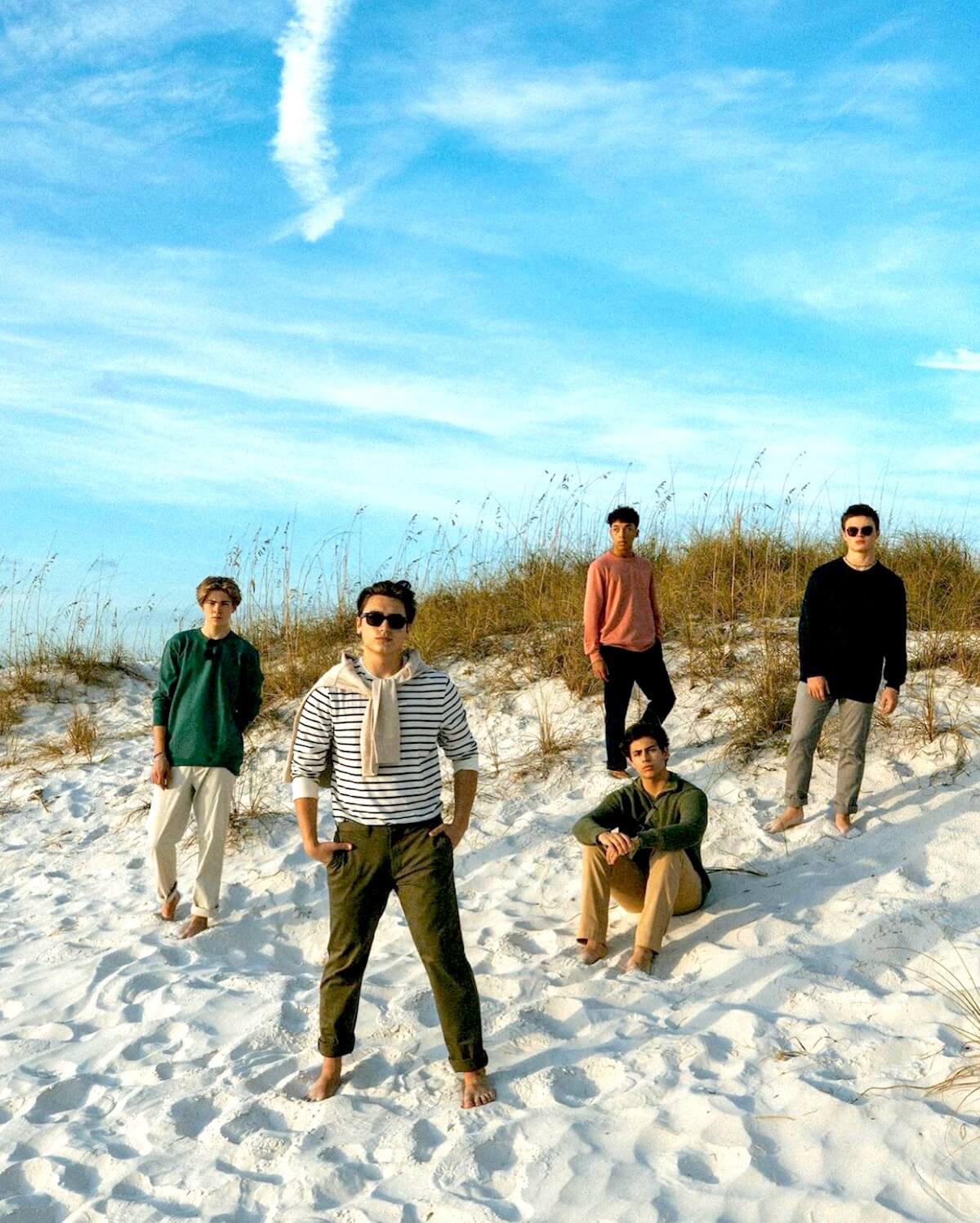 Also read about: 22 Lyrics From Justin Bieber's Justice Album to Use as Your Next Instagram Caption

Jagger: We have a bunch of music coming out later this year, so we're really excited. We've got music videos, a bunch of stuff, so keep on the lookout.

Love discovering new bands? Click HERE to read our interview with Teen Jesus and the Jean Teasers on their Pretty Good for a Girl Band EP.