Gabi Ury Planks Her Way To A World Record!

16-year-old Gabi Ury made headlines this April when she broke the women's world record for longest plank! 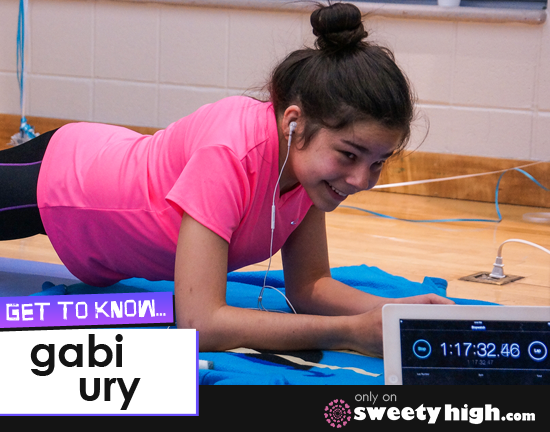 We spoke with the young record holder about overcoming obstacles on the road to her record, and much more!

Gabi Ury was born with VATER syndrome, leaving her with serious scoliosis and missing some of her muscles. But Gabi tried to never let this get her down.

"I didn't really let it affect me so much in my daily life," Gabi said. "I had to go to see doctors much more often than other kids and sometimes go to the hospital for surgery, but once I had recovered from surgery, I would try to go back to as normal a life as possible."

Even if Gabi would tire more quickly than the other kids at school, and couldn't run quite as fast, she would always take part in the same activities as everyone else.

She also had to wear braces on her legs until she turned 10. When she decided she didn't want to wear them any longer, her doctor gave her the ok.

Her fighting spirit also made her extremely competitive.

"I had always wanted a world record," she said. "I am a very competitive person and I always thought it would be really cool to be the very best at something."

By chance, she found that opportunity for a world record in the plank, a core-strengthening exercise that involves balancing on your forearms and toes.

"I never was super interested in the plank, or exercise in general until I accidentally discovered that I happen to be pretty good at the plank," Gabi said.

At the time, she was trying out for her school's volleyball team. While the rest of the girls ran the mile, Gabi was asked to hold the plank for as long as she could.

"That's how I found out I had this weird talent for it," she said. "When I saw how surprised she was that I had held it for 12 minutes, I thought of a world record."

She later discovered that the world record for longest plank was just 40 minutes.

"That's when I really started thinking of it as a possibility," Gabi said.

Gabi said that the possibility of a world record always kept her motivated to get down on the ground and train.

A few months before Gabi was set to make her attempt at the record, someone gave her the idea to turn the event into a fundraiser.

"I chose Children's Hospital, as they had helped so much throughout my life and I wanted to give back to them," Gabi said.

It was about a week before Gabi was set to attempt to break the record when she received an email from a woman named Eva Bulzomi, who held the current women's planking world record.

"She explained that, about a month before, she had attempted her record again," Gabi said.

Bulzomi's new record was 1 hour and 5 minutes, smashing the old 40-minute record. She was still in the process of having her new record certified by Guinness.

"She was very nice about it and I am very grateful, because my goal had been to get to one hour," she said. "I would have been devastated to find out that I had missed the record by five minutes. It made me a little nervous that I no longer knew that I could easily beat it."

But Gabi didn't mind adding some time to her ultimate goal.

"It didn't really change anything for me," Gabi said. "I knew I was still going to get very close to beating it and that there was nothing I could do about it."

Gabi made her record attempt on April 19th, 2014. A live webcast of the event allowed people to tune in and watch Gabi make history. But breaking a record was no easy task.

"During the official attempt, I hit a wall at about 35 minutes," Gabi said. "I think it was because just having a movie to distract me wasn't cutting it, with basically everyone I knew watching me in person or on a live webcast."

Gabi asked her mom to grab some of her friends to help keep her distracted. One of Gabi's best friends, Leah, plus Leah's mom and two sisters, Rachell and Naomi, came over to help by telling funny stories and singing.

"Leah had also been giving me 'inspiring' quotes every day for a few months," she said. "I use the word 'inspiring' loosely, as when she came over to distract me, her quote to me was, 'If you're not cheating, you're not trying.'"

The diversion helped, and Gabi got a second wind. It helped ever more that she had a bunch of friends around her to be supportive.

"Maddie and Katie tried to do the plank with me, but later told me that they would drop every time I wasn't looking,' Gabi said. "Once I started having fun, it became much easier."

After holding the position for 1 hour, 20 minutes and 5 seconds, Gabi set the new women's plank record!

Her fundraiser also raised more than $57,000! Gabi decided to use the money to create an endowment for a specific area of Children's Hospital called Kidstreet.

"I chose a place called Kidstreet, which is basically a daycare and preschool for 20 special needs kids, ages 0 to 4," Gabi said. "They give the help that sometimes the parents aren't able to provide. They have teachers and nurses on hand, offering eating therapy, physical therapy, and other support."

"I especially liked how they help parents who can't necessarily provide all of those things every day," she said. "My mom especially appreciated it as she knows firsthand how hard a 'high maintenance' child can be."

Gabi knew that her donation had been well placed when her father received an email from a doctor he had met the day Gabi was born.

"He was one of the only doctors who really explained to my dad what exactly was going on for me," Gabi explained. "This doctor has never really been my doctor but, whenever my parents needed to make a decision about my care, he would always help. He helped me so much throughout the years and never charged anything for it."

The email told Gabi's dad that the doctor was the new medical director at Kidstreet.

"He had heard about this girl who had raised money for them," Gabi said. "He then watched a video about me and suddenly realized that it was me. I think it's funny how everything comes full circle."

For even more on Gabi Ury's story, check out her official website here! You can also join us at SweetyHigh.com to tell us about your own inspiring girl power stories!