More times than I can count, I've sat down to play a board or card game with family or friends, only for it to be completely derailed because people couldn't put down their phones.

Game of Phones is a new card game that has that whole situation figured out. Instead of fighting with people's attachment to their phones, it works with it, making everyone's cell an integral part of the gameplay.

I thought the idea was pretty ingenious, so when its team offered to send me the game for review, I was happy to test it out and see how it really played.

Game of Phones purports to be "The game for people who can't put down their phones," making each player's phone central to winning the game.

The game features 112 cards, and each has its own unique prompt. During each turn, a judge pulls a card, and the remaining players have to do their best to impress the judge based on the criteria on the card within 60 seconds. Sometimes, there will be a clear winner like "Most missed calls in the last week" or "Text a random number, first reply from a human wins." Other times, it'll be up to the judge's discretion, like "Find the best selfie" or "Take a photo of something white." Whoever the judge picks first gets the card, the judge rotates every turn, and whoever collects 10 cards first wins.

Essentially, the more you use your phone, and the more varied the experiences you have on your phone, the better you'll do. 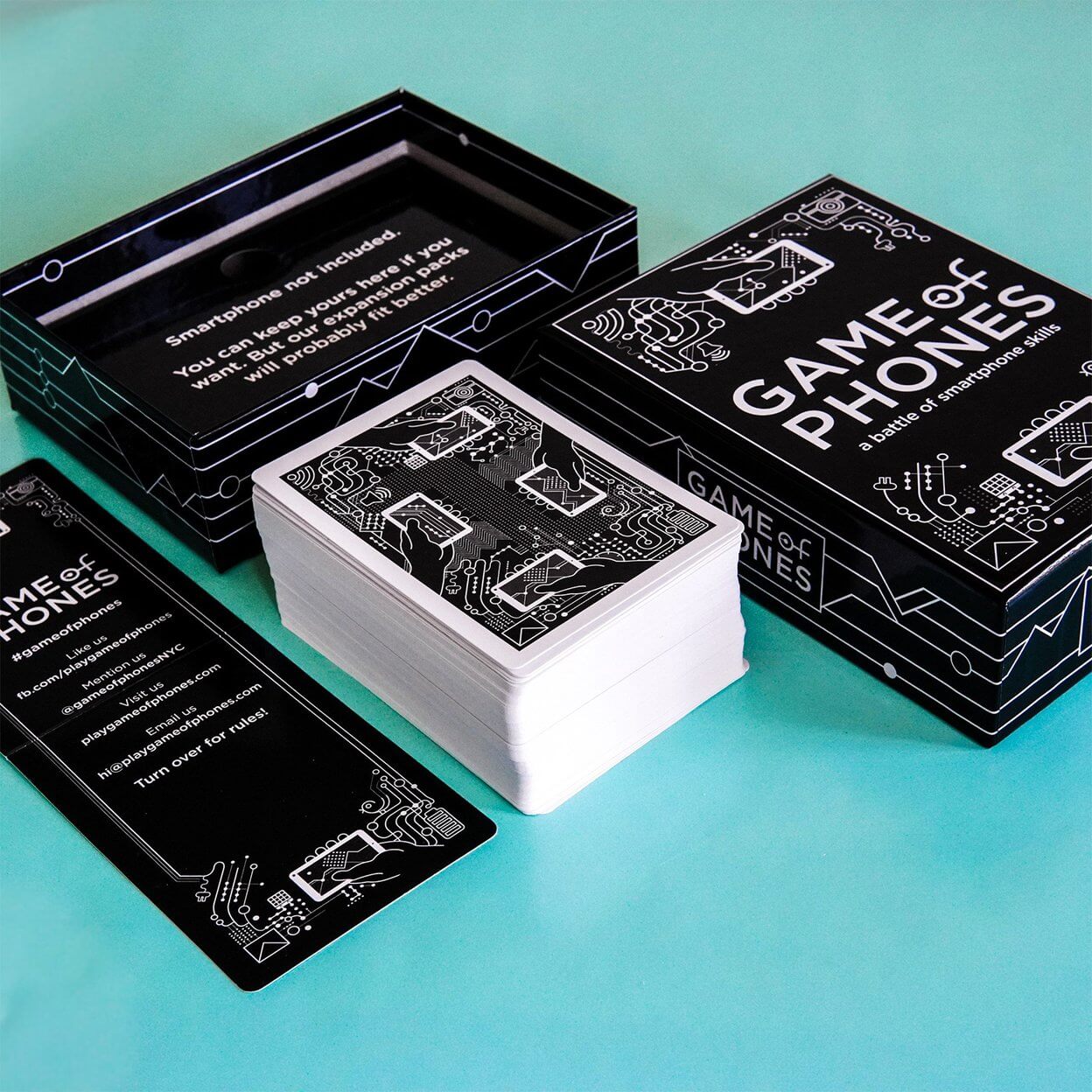 I decided to break out Game of Phones late on Thanksgiving night as festivities were winding down, and managed to find four people who would join me in the game. As I explained the rules, everyone appreciated the simplicity and was excited to whip out their devices and get the game rolling.

As the game commenced, I was surprised to see how many different interesting prompts were written on these cards. Some were about the specific apps we downloaded on our phones, or even how those apps were organized. Others required creative googling, perusing our social media, clever emojis uses, or even getting a response from an outside party within the allotted time. One of the cards we stumbled across even was about the physical state of the phone itself, crowning a winner whose screen was the most cracked. 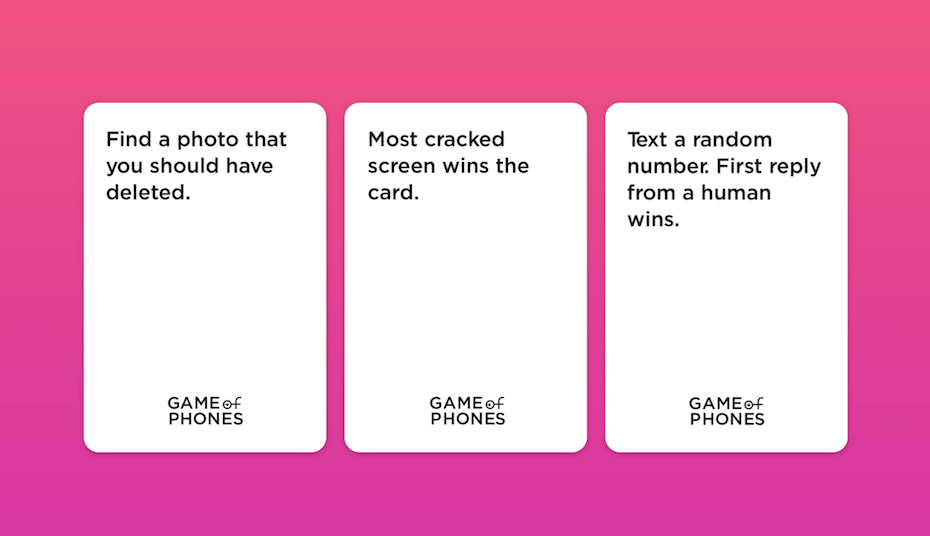 While some asked for the best photos in my camera roll, others asked us to take photos in real time using whatever was around us. I played in a backyard around a firepit, which resulted in some great images, but an even more interesting location could have spawned some really exciting photos.

But in my opinion, the real fun came from the cards with more subjective prompts, because then the game became all about convincing the judge that you did the best job. At times, the game got a bit uproarious, but those moments were when the game was at its strongest. But I do have some words of warning—whenever you're the judge, people will totally accuse you of being biased if you keep picking your best friend, closest sibling or S.O. as the winner, even when they always legitimately impress you the most.

All of that wound up making for a really fun experience that allowed us to connect and laugh together, even if we always had our phones in hand. The game was super easy to play and didn't require space for a game board or keeping track of pieces. All we needed were our phones and the stack of cards.

While the deck estimates that a game should last about 30 minutes, we were really lenient with the one-minute timer, and our game lasted about an hour. The more players you add to the game, the more I recommend lowering the 10-card goal for winning so that it doesn't drag on forever.

But despite that simplicity, it's still possible to hit snags—depending on who you're playing with. Even though I personally found it extremely easy to understand, a couple of people in my party would frequently get confused about whose turn it was, or would how the card collection worked and would have to be reminded again and again.

There are also a couple of cards that won't necessarily make sense for everyone playing. For example, one card would reward the person who had the most dating apps installed on their phone, when everyone in the group was either too young to be on dating apps or in a relationship, so no one had any. And then, there's the obvious fact that everyone's phones need to be charged to play. During my game, one player's phone died just minutes into the game, and they came back later after their phone had recharged a little bit but were put at a major disadvantage.

Despite all that, I think Game of Phones will be an instant classic, and I definitely plan to bring it back around for the family gathering at Christmas this month. 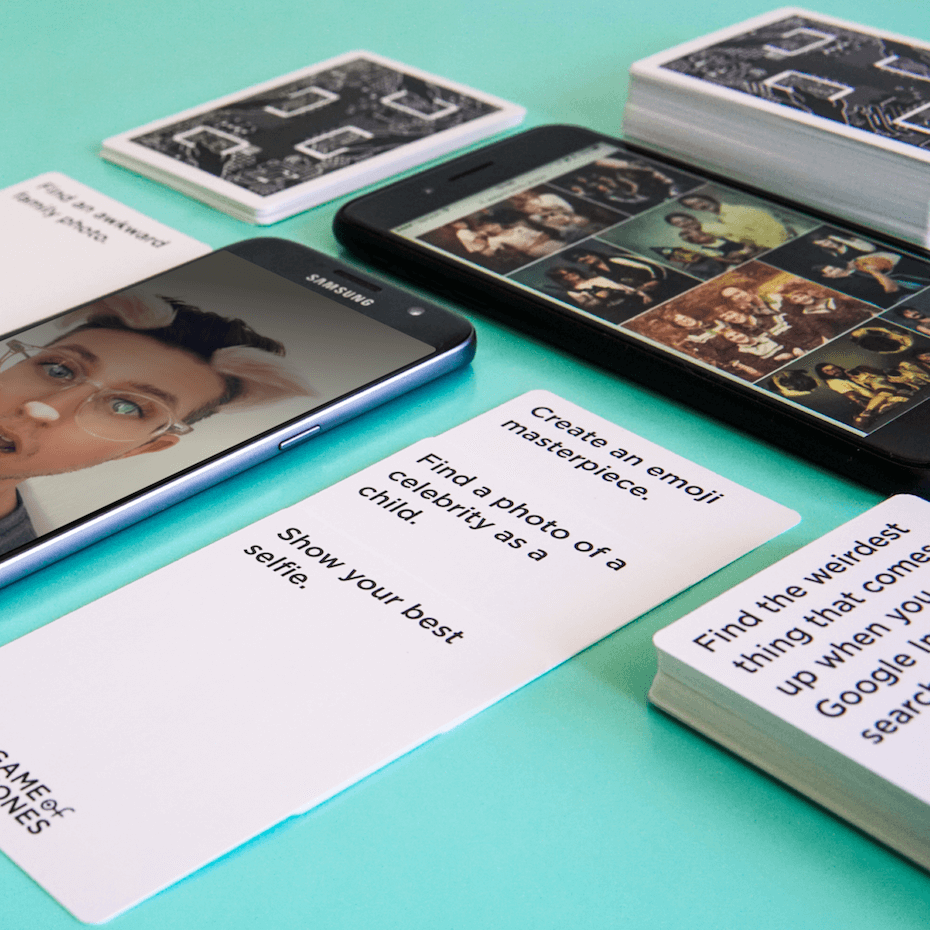 If you're into funny, socially driven card games at all, I highly recommend Game of Phones. I enjoyed that it wasn't just about who has the best photos, or the most contacts, but that the prompts require thought and creativity as well. Not only is it serious fun, but the cards are appropriate for anyone who's old enough to have their own cell phone—though I can't speak to the appropriateness of the players themselves.

The deck costs just $20 and comes with 112 unique and fun cards, and there's also a $5 expansion pack available with 30 additional cards so you can keep the fun going on longer. If there's one big downside to the game, it's that if someone knows a round of Game of Phones is coming ahead of time, they can cheat by loading up their phone with amazing photos.

But I think the most important thing about the game is that it's great for bringing people together, even if their noses never do leave their phone screens.

Love consulting cards? Click HERE to find out what happened when one of our writers used tarot cards to plan her dinners for a week.