I loved a lot of things about visiting Australia, but one of my top favorites was the discovery of Aussie hand pies.

These delicious pies, filled with meat and veggies, can be found all over the place in Australia (including a personal favorite fast food chain called Pie Face), and differ from traditional British meat pies because they're made with a pastry crust, rather than pie crust, so they can be easily eaten on the run. Now, it's been years since I visited the continent, and I hadn't had the pleasure of indulging in an Australian pie for a while.

That was before the team behind G'Day Gourmet got in touch. This U.S.-based Australian meat pie brand ships delicious handheld pies nationwide, and as soon as I heard about them, I knew I had to give them a try. They were kind enough to send me one of each of their offerings, and it turns out that Aussie pies are even better than I remember.

G'Day Gourmet was created by chef Michael Peacock, who grew up between Australia and New Zealand before relocating to the U.S. in the '80s. Discovering that meat pies just weren't a thing here in the U.S., he eventually sought to change that, launching the Flying Pie Guy food truck. Over time, that venture grew, and today G'Day Gourmet Pies can be shipped frozen anywhere in the nation (and you can also visit their truck if you're lucky enough to live in Pennsylvania or New Jersey, where it makes frequent stops.)

Their Aussie meat pies have carefully crafted fillings within an all-butter crust, somewhere between a shortcrust and a puff pastry, so they can be eaten as hand pies or enjoyed at the table with a knife and fork. Their pies come in five tasty varieties (including a vegetarian option) and they also offer Australian sausage rolls. Pies are available in six-packs for $85, eight-packs for $109 or 12-packs for $149, while sausage rolls sell in packs of eight for $69, with shipping included for most U.S. states. 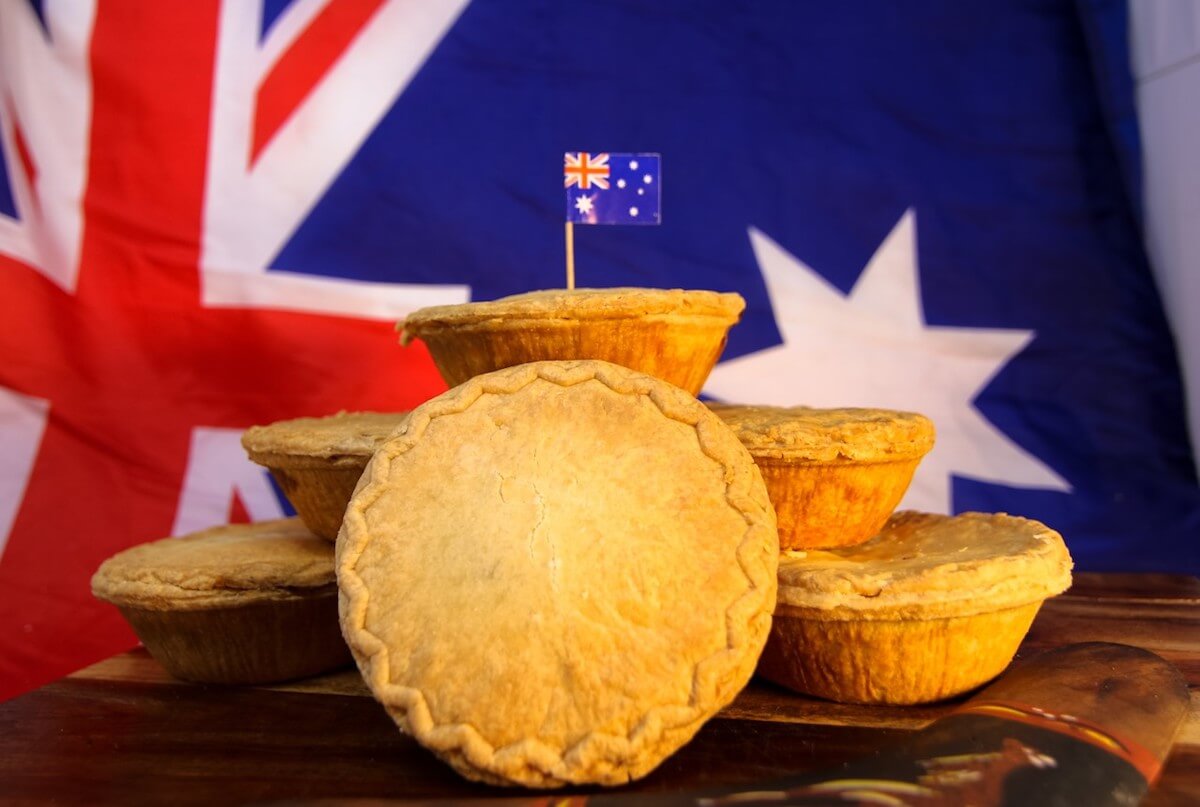 For me, sausage rolls can be a bit hit-or-miss, as I'm picky about the seasonings in sausage, so I was very curious about how I'd like these Aussie sausage rolls. My roll came individually wrapped, reminding me a little bit of a frozen burrito, but what I loved most about this was that I wasn't just reheating the sausage roll—the pastry was uncooked, so it would be baked fresh in the oven for the first time as I heated it, hence the long cooking time. After baking it at 350° F for just under half an hour, it was a beautiful golden brown on the outside, and when I broke it in half with a fork, the pastry was crisp as well, holding the shape well enough to eat with my hands.

And the filling was just right. The pork sausage was deliciously complemented with both diced onions and mashed garlic, giving it a hint of sweetness and fullness in flavor. It was also super delicious with the pastry, and just the right size to eat for lunch without being overstuffed. After eating this, I figured if the sausage rolls were this good, I was in for a real treat with the pies. 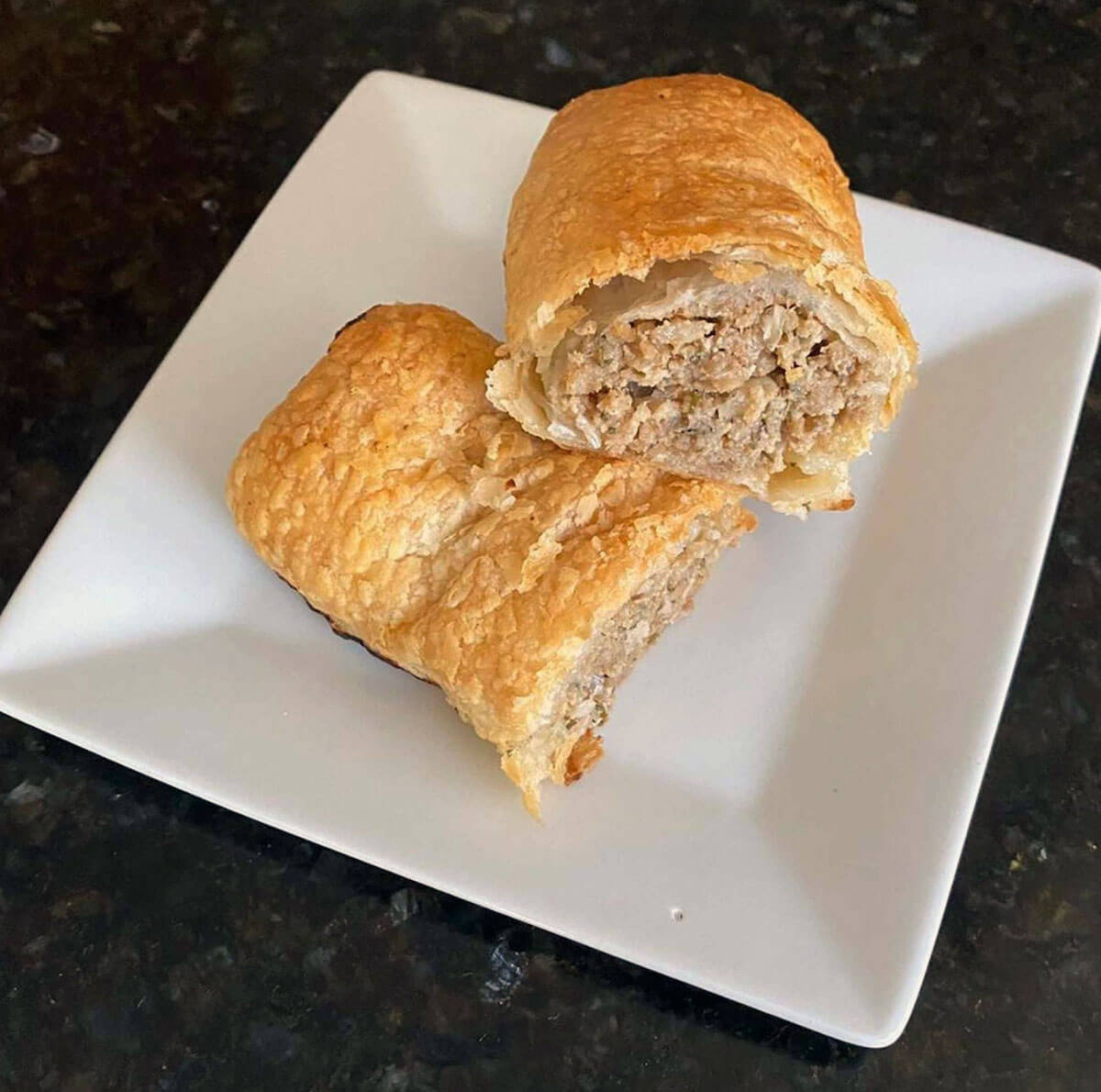 Next, it was time to indulge in my first pie. I decided to start with the vegetarian version, feeling like it could only get better from there, and placed the unbaked pie, complete with its own bakeable pie pan, into the oven at 375° F for 45 minutes.

Again, the pie was baked to perfection, with a flaky, beautifully browned crust. I wasn't super excited about the ingredients inside, but once I dug in, I was very pleasantly surprised. The filling, made of chopped spinach and minced garlic in a mixture of feta, ricotta and parmesan cheeses, was reminiscent of a strong spinach dip—and I love spinach dip. It paired well with the crust, and I found that it wasn't long before I'd eaten the whole thing up, though these are sizable enough that you could also split them between two people, if you'd like. 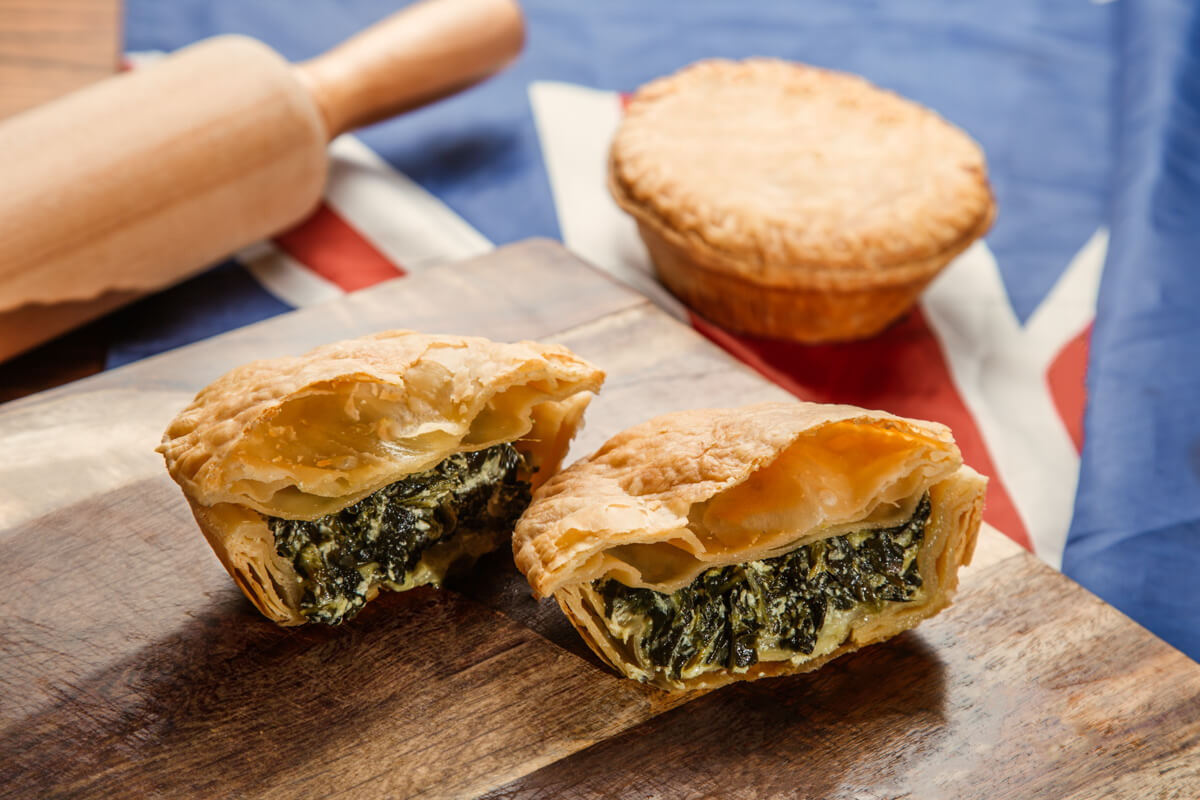 Next, it was time to move on to the meatier pies. I went with the Chicken and Leek Pie, and since I'd had so much success with the previous time and temperature, decided to do the same for each of the pies I enjoyed. This pie was a bit more like a classic chicken pot pie—except way better than any I'd ever had. The hunks of roasted chicken breast were tender and juicy inside their smooth and creamy leek sauce, and the butternut squash and kale added extra fullness without taking away from the taste at all. It was another winner, and three more were to come. 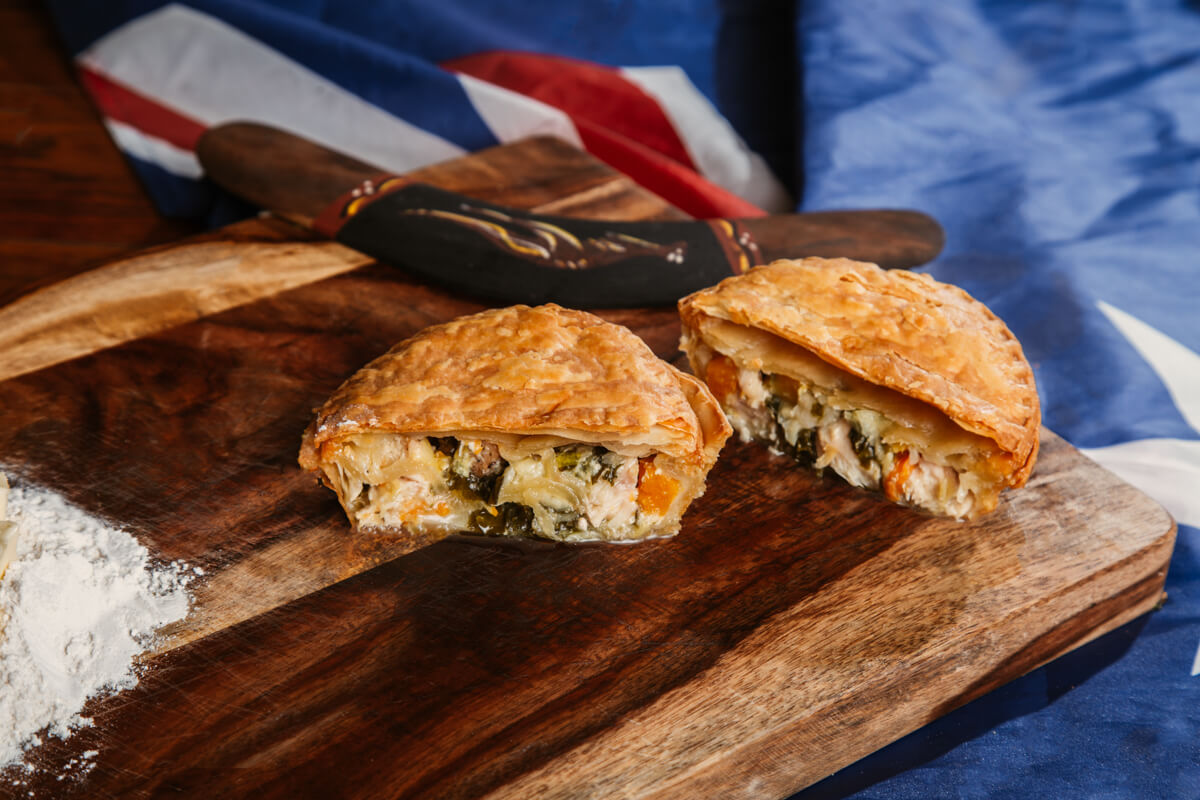 Next was the Beef, Bacon & Cheddar Pie, and I'll admit that I was slightly intimidated by that name at first. It just sounded like a lot, but after baking it up and biting in, I found that I had nothing to worry about. The minced Australian beef was hearty, and the flavor was enriched by smoky, salty bacon, just the right amount of mild cheddar cheese and savory gravy. It's a bit like a cheeseburger in a pie, and that's a wonderful thing. 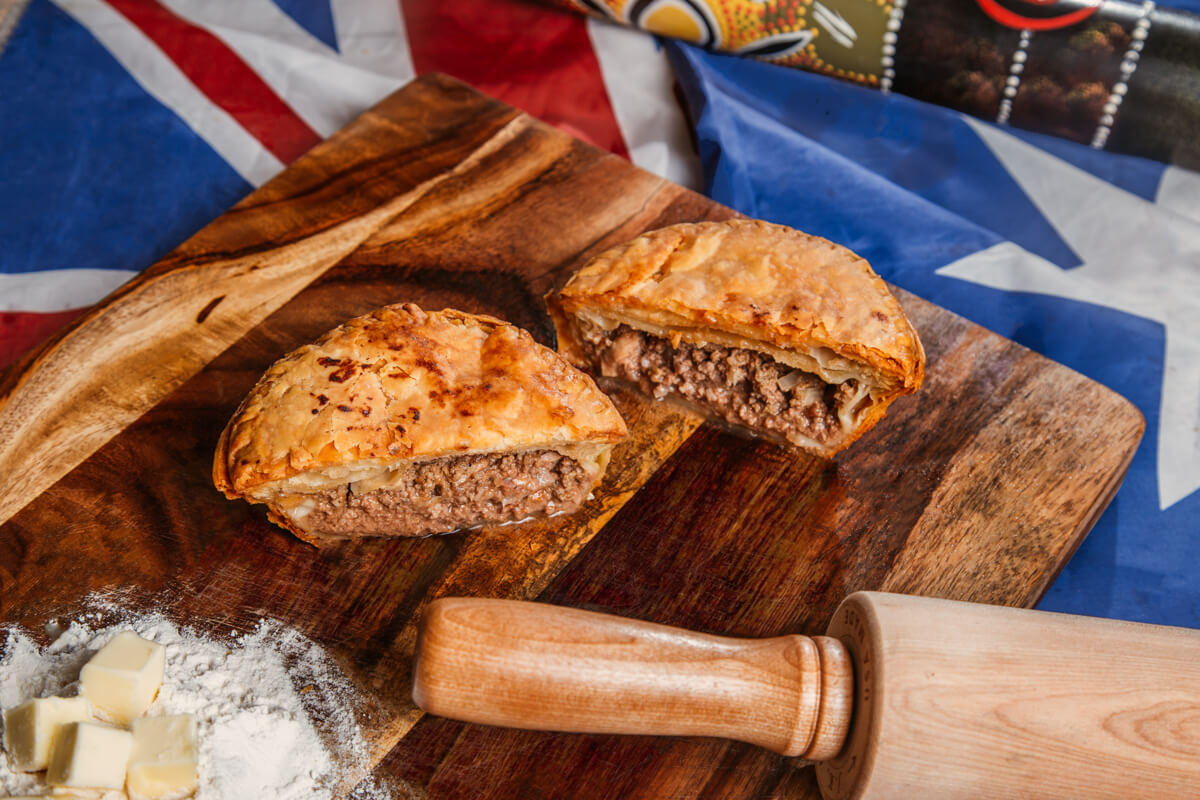 I was very much looking forward to this pie because its ingredients sounded perfectly classic, and it was just as good as I'd anticipated. Again, it looked incredible out of the oven, and with ingredients including large pieces of Australian steak, celery, potatoes and carrots, it was destined to succeed. However, I think it was elevated even further with its Guinness stout gravy, with a slightly bitter, earthy taste that accentuated all of the ingredients and pulled them all together into one excellent pie. 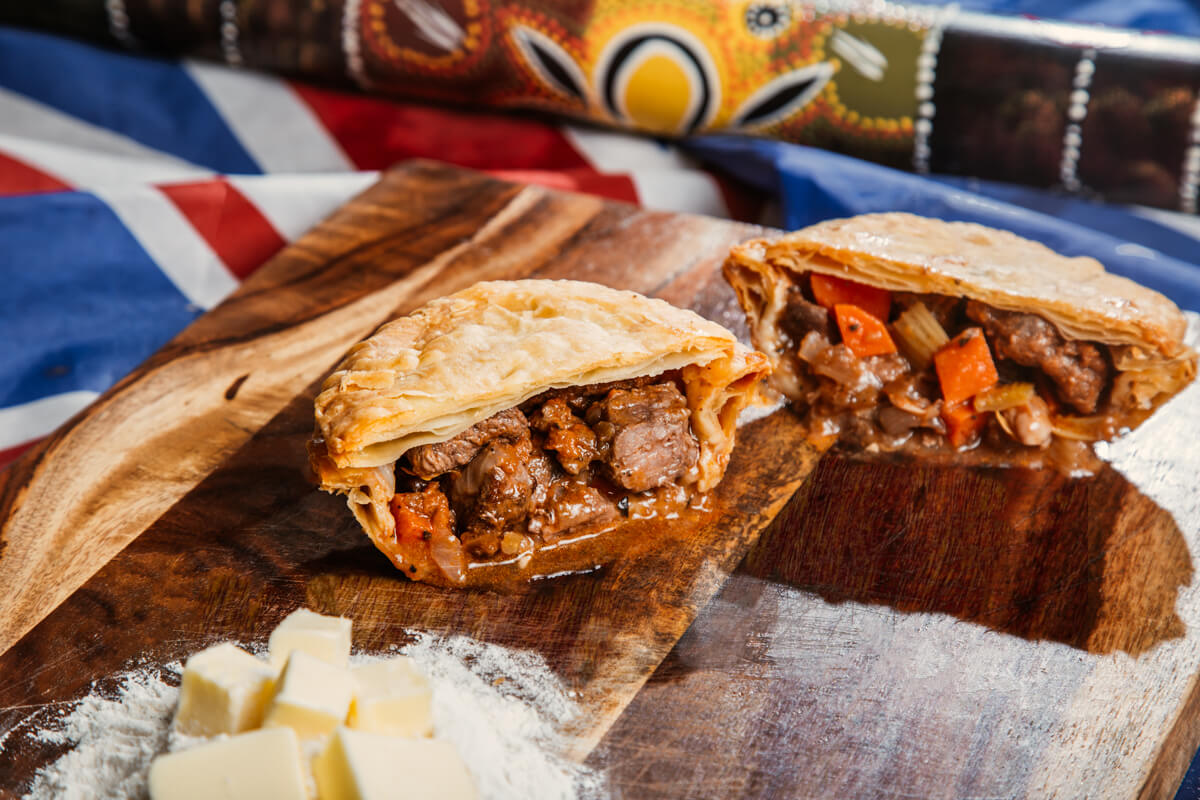 For the last taste test, I saved the one I was most excited for, the Lamb & Rosemary pie. After its time in the oven, it was baked to perfection, with incredibly tender hunks of New Zealand lamb alongside chopped celery and carrots. However, it was the gravy that was the star of this pie, featuring red wine as well as rosemary to bring a hint of sweetness and a lot of herbal flavor to the ingredients. It was probably my favorite pie of all, and I was pretty sad when I realized my G'Day Gourmet Adventure was over. 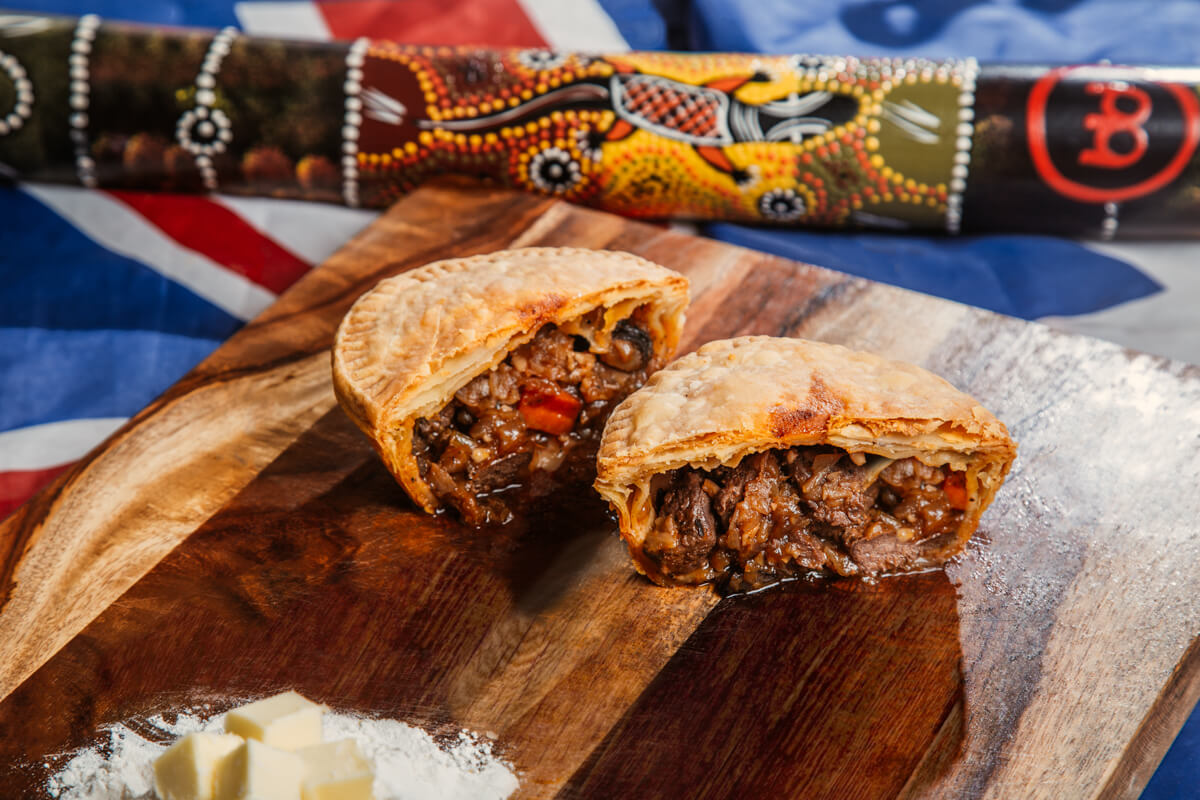 There's no question that G'Day Gourmet Pies are incredible. Their pastry crusts are crafted to bake to perfection every time, and their tasty and well-selected ingredients are somehow even better, resulting in pies that are as good as homemade—if not better. If there's one sticking point, it has to be the price. Yes, free shipping is included (and shipping frozen goods is not cheap), but at more than $12 per pie even at the best value, they don't come cheap. In terms of quality, they've earned that price, but you may have to reserve them for special occasions.

Looking for something you can find in your local frozen food aisle? Click HERE to learn all about Feel Good Foods' new gluten-free frozen pan pizzas.