GEM Is the Real Food Multivitamin That Reinvents Nutrition

When I remember to (which isn't as often as I'd like), I take multivitamin gummies, fish oil and Vitamin D. While the gummies are tasty enough, swallowing gelatin-coated pills isn't all that pleasant. I don't look forward to the experience, which certainly doesn't act as a reminder.

I also don't usually feel better or different after taking my vitamins. I've even heard that when you take pure vitamins in capsule form, your body barely absorbs them, further decreasing my faith in them.

That's why I was so intrigued when I heard about GEM Nutrient-Dense Bites, compact real food cubes that act like a daily vitamin full of all of the essentials women need. The team behind GEM reached out and asked if I'd be interested in trying them myself, and I jumped at the opportunity to see what a different kind of nutrition might look like.

GEM is a nutrient-dense, plant-based bite that's packed with essential nutrients for women, acting as a daily vitamin without being chemically engineered to be one. It's made with real food ingredients, instead of a bunch of extracts shoved into a capsule, so it's not plastic-y or a sugar-coated gummy. It's also based on the idea that our bodies metabolize real food better than they're able to process pure vitamins taken in pill or gummy form.

According to GEM's website, more than 90% of women are vitamin deficient, so the bites are specially formulated to include the 15 nutrients American women need most. They're full of Vitamin D, Magnesium, Biotin, Niacin, Folate, Riboflavin, Iron, Thiamin, Potassium, antioxidants, Omega 3's, Vitamin K2 and Vitamin B5, B6 and B12. That's achieved with real ingredients, including mushrooms, quinoa, red algae, dates and more. The Cacao flavor I received also includes a bit of unsweetened chocolate and chicory to give it a great taste. It's also vegan, as well as gluten-free, soy-free and corn-free. Together, those ingredients work to give the user extra energy, clarity, beauty and balance in life.

GEM is available through a $39 a month membership fee, which can be canceled any time and comes with free shipping. Each container holds a month's supply of 30 bites.

I was incredibly curious when my package of GEM arrived, as I found the pretty white and dusty rose packaging quite enticing. However, I have to be honest that as soon as I popped off the lid, I became slightly less entranced by the idea. The GEM bites gave off a scent that reminded me vaguely of fish food—which made sense given the various algae ingredients. 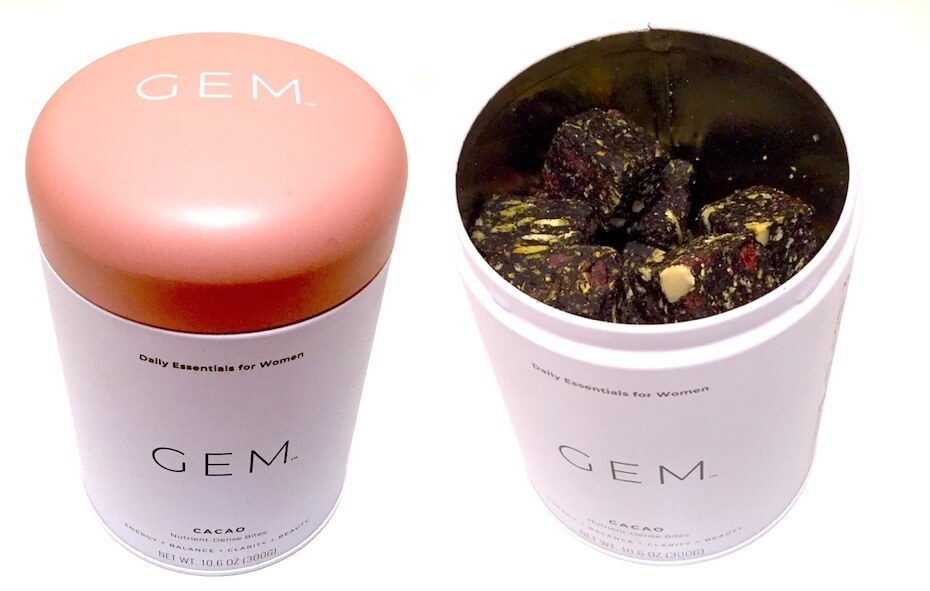 Despite the slightly off-putting scent, I put on a brave face and dared to bite into the tiny cube-shaped snack bar, and was instantly impressed by the flavor. I was thankful it didn't taste fishy or bland. Instead, it was sweet with dates, and a delightful chocolatey finish with nutty notes. The texture was soft, but with the occasional bit of crunch, thanks to the chia seeds nestled inside. That made me forget all about the flavor, and in fact, I was tempted to have another, but resisted the urge.

According to the instructions, it's not recommended that anyone take more than three GEM bites in a day, which has helped me not to indulge. Plus, I'd like to keep the experience going for as long as possible.

Maybe it was all in my head, but minutes later, I felt more energized and focused. Perhaps it was because I hadn't had much of a breakfast, but I felt more on track than I had previously—and in the midst of a pandemic that's trapping me at home, that was a very good thing. Plus, with just three grams of sugars per 35-calorie bite, I was getting my nutrition without a bunch of fake junk.

I was curious to see if others would feel the same way, so I brought the container of GEM with me during lunch with family. Despite the cute packaging (and a little serving tray within the lid that reads "Bite Me"), everyone was put off by the smell and insisted they'd "try it later"—and two weeks later, they still haven't. 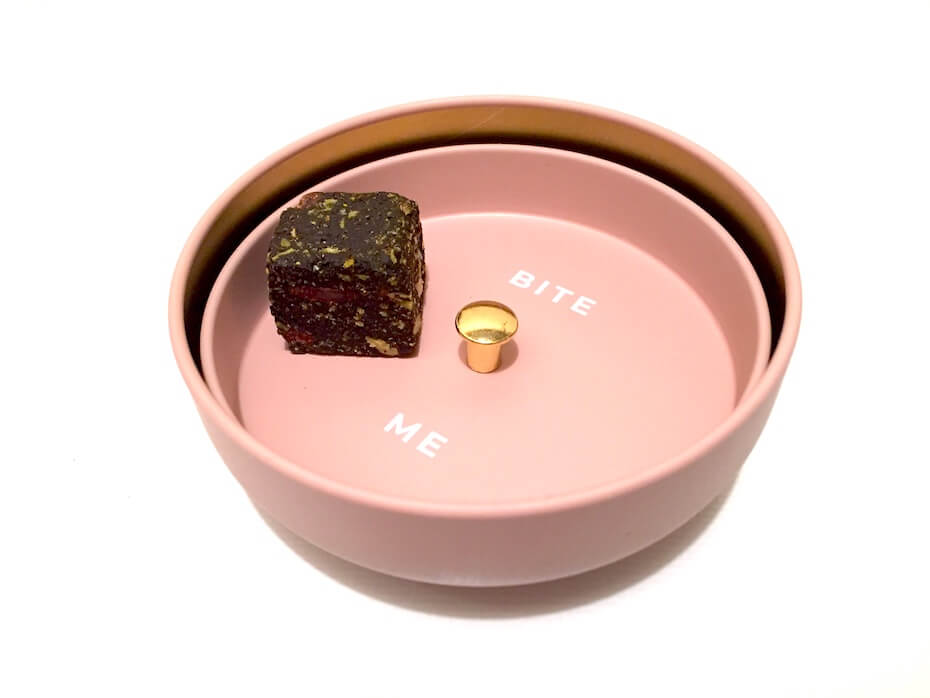 Still, I decided to keep the container on my desk, which every day since then has made it super easy to remember to eat. The fragrance doesn't bug me at all anymore, and I have no hesitations about eating them each and every day. Plus, I like that, since it's just food, I can have it any time of the day to get the nutrition I need. Not only is it super tasty, but I always feel better after I have one. The only times I forget to take one is on my off days when I'm not at my desk—and even then, I've been pretty good at remembering. Two weeks into the experience, I can say I'm a fan.

After about 14 days of having GEM bites (almost) daily, they've become a regular part of my routine, and when I don't have one, I can tell the difference. Despite an odd smell, I have no reservations about happily eating one daily, and I'll honestly be pretty sad when I run out. It's got a great taste, and the list of awesome natural ingredients is something I can be confident about putting in my body. The biggest downside is the cost, as $39 for 30 bites might be too high for many people. But if you lack certain nutrients, and regular vitamins aren't working out for you, I highly recommend trying GEM. They also have a $10 trial pack containing five bites, so you can give them a shot and see if they work for you, without making too big of a commitment. You might be very happy that you did. 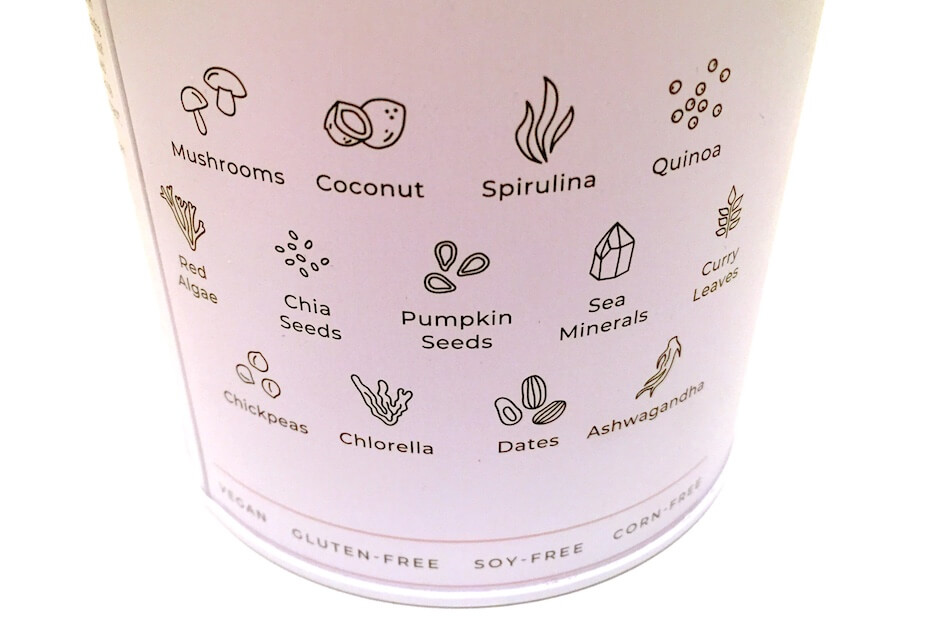 Curious about how to have a healthier immune system? Click HERE to learn about the best immunity boosters, according to a doctor.