Drew Denny and Sabrina Frey are the minds behind the Gift of Love Project, which aims to bring vibrant and uplifting art to hospitalized children whose lives have been affected by illness and organ transplant. 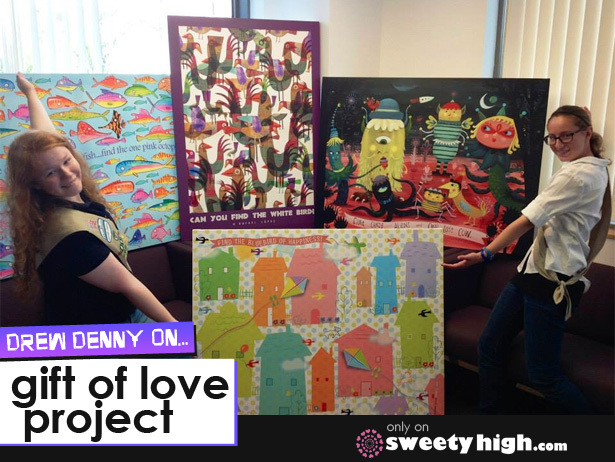 We spoke to Drew Denny to learn all about the inspiration behind the project, and why art in pediatric hospitals is so important!

Drew Denny and Sabrina Frey attended the same elementary school, but really got to know each other through Girl Scouts.

"We really got to become friends around 3rd grade when we were in the same class together," Drew said. "The two of us were both book smart, so we bonded pretty well!"

"I never would have expected to find it happening to a close friend," she said. "All I can say is we're so lucky to have the both of us end up in stable, happy conditions."

It was also an odd coincidence that both girls had their liver transplants at the Mattel Children's Hospital at UCLA. They both recovered successfully thanks to the incredible work done at the hospital, so when it came time to work on their Girl Scouts Silver Award, they saw it as an opportunity to give back.

When Sabrina offered to team up with Drew on a project, it only made sense that they'd decide to give back to the hospital that helped to save their lives. Both wanted to do something art-oriented, which was a great jumping-off point.

Originally, Drew and Sabrina decided to work independently to create artwork for the hospital, but the idea evolved over time.

The two wanted to bring colorful, whimsical art to the hospital, as hospitals are known for their somewhat dull decor, and both girls were struck by the blank white walls during their hospital stays.

"I can say with no doubt that they've had the same photographs for upwards of 10 years on their walls, and they're certainly not entertaining or engaging for the younger patients coming to the hospital," Drew said.

After Drew and Sabrina attended an exhibition from the Chemers Gallery in Tustin with an entire section dedicated to artists who create art for children, the two came up with a better idea.

"When we realized we were in over our heads with independent work, we turned back to them for aid, and couldn't be more grateful for the help we received," Drew said. "It was delightful to receive our first pieces! We were so shocked by the quality and quantity!"

"We wanted to go for an I Spy-type feeling to the pieces, really getting the kids interested and invested in the artwork," Drew explained. "The 'search and find'-type gimmick proved to be versatile, allowing the artists creative freedom without any limits, but a particular goal. It was so exciting to see a young boy actually looking and searching for the artwork on the day we delivered them!"

Want to contribute to the Gift of Love Project? You can make a donation on their FundRazr here, or share this article to spread the world!

You can also join us at Sweety High to tell us about the differences that you aim to make in the world!