It's Girl Scout cookie season and we can't wait for our orders to arrive.

But this year, instead of scouts coming door-to-door or us grabbing a box while shopping at the grocery store, these annual cookies can be found in a new location.

You can now pick up some boxes at your local Target, but instead of heading down the snack aisle, make an unexpected turn towards the breakfast cereals because Girl Scout cookies are now part of your balanced first meal of the day.

That's right, if you haven't yet heard, two of our favorite cookie flavors, Thin Mints and Samoas (or Caramel deLites, depending on where you live) are now miniaturized in cereal form.

We took the liberty of taste-testing these new sweet treats to give the thumbs up or down before you grab a box of your own. Check out our review below:

Now, to begin with, I knew I could find these babies at my local Target, but I was still nervous that they wouldn't be there. Would they be sold out or simply not carried at my go-to Target location?

I zeroed in on the supermarket section, although the sunglasses display was trying to pull me over to the dark side. I power-walked right past all of the other goodies—eye on the cereal aisle prize. The selection was surprisingly vast and after a twice-over I felt defeated, not having caught a glimpse of the much-desired GS cookie cereal. About to give up, I focused in on the boxes directly in front of my face—oh, I was standing right in front of both of the cookie flavors which made me think it might be time to schedule an eye exam. At $2.99 a pop, I grabbed a box of each and fled before the makeup section could reel me in. 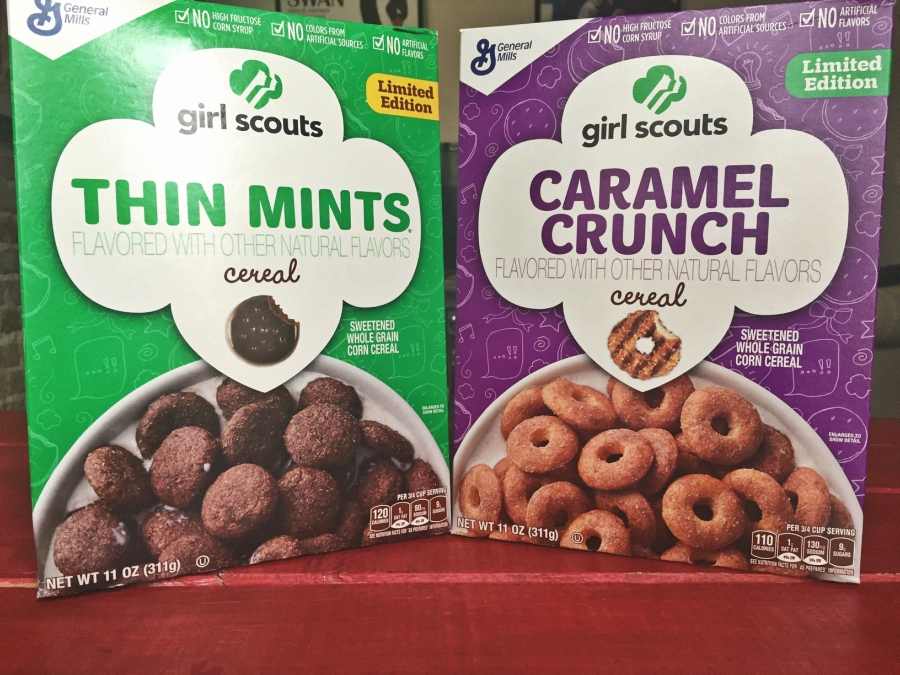 I'd like to tell you that I made it all the way home before I ripped open the boxes—Thin Mints and Caramel Crunch—and began my taste test, but that would be a big fat lie. I sat both boxes in the passenger seat of my car and nearly buckled them with a seat belt. The cookie craze was beginning to take over.

As I pulled up to a red light I reached for Caramel Crunch, telling myself no one had to know about this dirty little secret. Samoas are my absolute favorite GS cookie so I figured I'd give their sister cereal a try first.

My first impression? Yum. Super sweet, but in a good way. I tried a second, and then a third when the flavor became overpowered with a slightly burnt taste. I imagine this over-toasted taste was coming from their attempt to capture the delicious caramelized toasted coconut of the real cookie. The flavor is heavy on the caramel and light, or non-existent, on the chocolate. I'm not actually sure if I was getting the taste of caramel or if the rings just tasted of slightly toasty sweetness. Either way, I was satisfied, yet not obsessed, and moved along to the Thin Mints once I reached another red light. 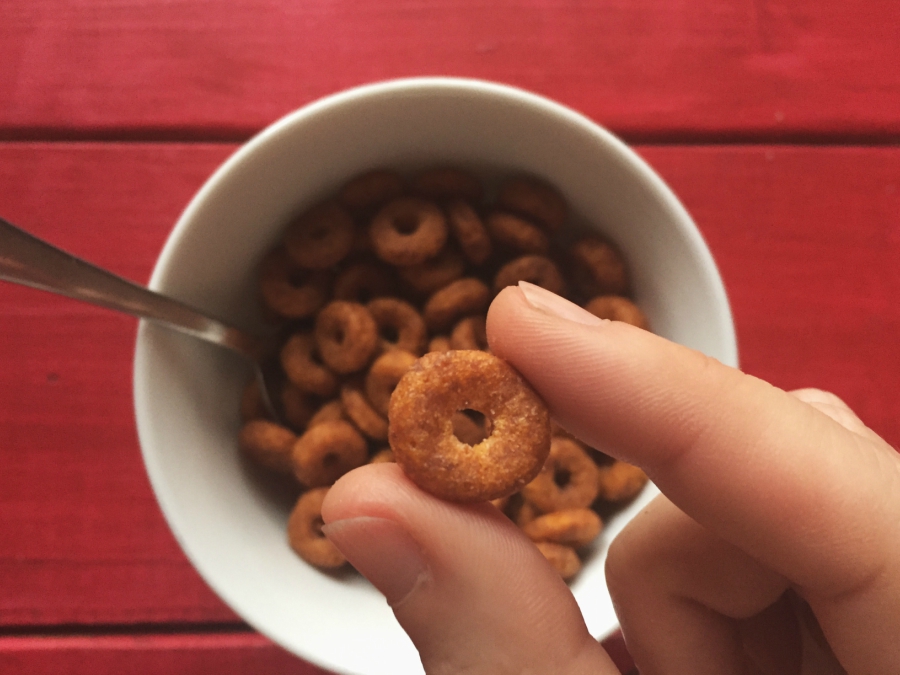 My first impression of the Thin Mints was that they tasted like Cocoa Puffs dusted with faintly sweet mint. I am a big fan of Cocoa Puffs—you could even say I'm cuckoo for them—so this flavor jumped instantly to No. 1 for me. The light mint dusting on top was similar in my opinion to the peanut buttery powder on Reese's Puffs cereal, which I would also happily pour into my bowl any given morning.

I was actually pretty surprised by my instant love for this cereal because, and I say this with extreme caution, I'm not a huge fan of Thin Mints. I know, I'm sorry, I wish it wasn't true. But they've never really impressed me as a cookie. I hope we can still be friends. 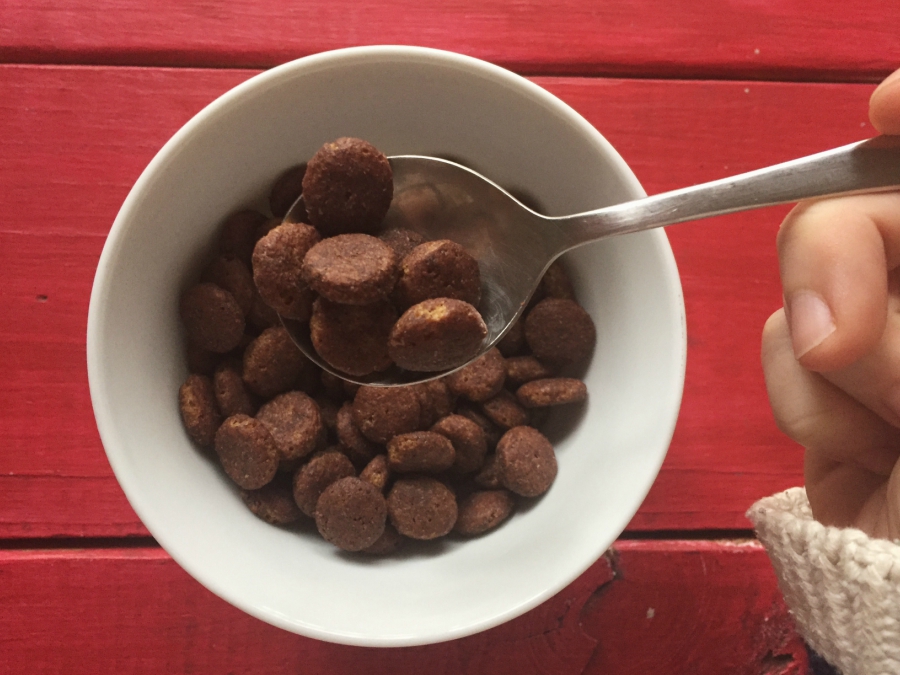 The second I got home I had to try these two cereals the right way, in a big bowl of milk. What happened next threw me for yet another loop. The overpowering sweetness of the Caramel Crunch was nicely diluted by the milk, which created the perfect level of crunchy, caramel-y loops. The Thin Mints, on the other hand, had a more subtle flavor to begin with, so when it was paired with milk, the sweet minty dust washed off and had a rather bland, but still enjoyable, chocolate crunch.

Cereal texture is just as important to me as flavor so I'm happy to report that both stand up in the crunchy department. I practically gag when a cereal like Frosted Flakes gets soggy upon nearly instant contact with milk. But the GS cereals withstood the milk well and I was able to make it to the bottom of both bowls without a single soggy encounter.

If you enjoy super sweet cereal, such as Cocoa Puffs, Cinnamon Toast Crunch, or Cookie Crisp, then you'll like the new Girl Scouts cereals. If, however, you prefer a more healthy bowl of breakfast, I'd say skip the scouts.

I would not suggest that anyone replace their annual cookie order for these breakfast boxes because they aren't a good cookie replacement, but rather a delicious addition to a favorite seasonal treat. I'd also suggest, if you're feeling adventurous, using these cereals as a topping for ice cream—vanilla bean would taste amazing with the Caramel Crunch, while mint chip would add an extra dose of mint to the chocolate puffs of Thin Mints.

While I may not stockpile these limited edition cereals as though the world is about to end, I will still probably pick up a box of one or the other next year when Girl Scout cookie season is in full swing again.

If you're as big of a fan of snacking as we obviously are, you need to check out our review of the best food subscription box on the market HERE.