Across the nation, men outnumber women in science, technology, engineering, and math (or STEM) fields. Girlstart is a nonprofit organization based out of Austin, Texas, that aims to bridge that gap by getting young girls interested in STEM. 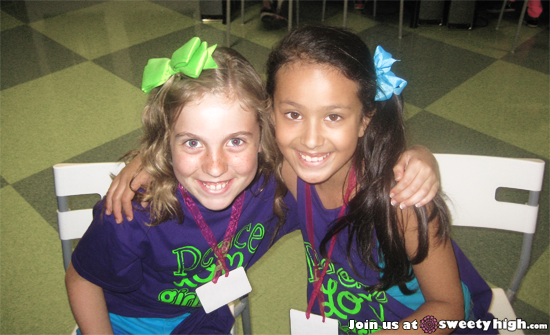 We spoke to Tamara Hudgins, the executive director at Girlstart, all about Girlstart's mission, and what we can all do to make sure female voices are heard when it comes to science!

"The inspiration for Girlstart was in a general trend noticed among local high tech companies that there were few women in the STEM ranks," Hudgins explained.

Many tech companies hire women mainly in marketing, HR, or administrative jobs, while men take the jobs that require training in whatever technology is being utilized.

The book Options for Girls, which highlighted the opportunities women have in STEM careers, also inspired the foundation of Girlstart.

"We think that the inequity is really about ensuring that girls see how they fit into a STEM college major and career," Hudgins said. "Girls, as YOU know, are just as smart and just as capable as boys (well, maybe just a little smarter and a little more capable). It's not about aptitude. It's about interest, confidence, and seeing how girls can change the world and make it a better place by doing STEM as their field of study or career."

Helping girls to realize the potential in STEM fields starts as early as elementary school and earlier.

"We want girls to stay interested in science," Hudgins said. "It's fun! And you CAN make a huge difference in the world if you stay in STEM."

Girls who go into STEM majors are more likely to find jobs when they get out of college, Hudgins said. They're also often paid better than other girls who major in the humanities or liberal arts.

"That means that you're going to have a LOT more flexibility in your life, you can make better and stronger choices, and you can decide for you what you want to do with your life," Hudgins explained. "Now, and even more so in the next five to twenty years, there are way more STEM jobs available than people qualified to work in them. You can have a stable future, AND an interesting job, and a rewarding life, with STEM."

Since Girlstart's inception in 1997, the nonprofit has grown to serve girls in STEM-themed camps and after-school programs not just in Texas but across the nation.

This summer, 597 girls have attended Girlstart camps in Texas, California, and Washington. More than 225 of those girls were able to attend for free.

"Making sure that STEM education is available to all girls is very important to us, and we don't want girls to be prevented from participating in STEM just because they live outside of Austin or their family maybe can't afford it this year," Hudgins explained.

"It's very exciting and we all work really hard to make sure that when we can grow to bring more Girlstart fun to more girls, we do it," Hudgins said.

There are many steps girls can take to ready themselves for STEM careers later on in life, Hudgins explained.

Taking Algebra 1 and 2 in middle school sets girls on the path to more success in math and science classes later on. It's also important to take science classes early, and to use resources such as National Geographic magazine and TED Talks to broaden your horizons.

Girls in STEM have the potential to be environmental engineers, oceanographers, video game developers, wind or solar energy engineers, app creators, petroleum engineers and more, according to Hudgins.

"I think the future is that girls must realize that they can change the world," Hudgins said. "The world needs more ideas and we need more ideas from girls. Girls have great ideas, but at some point they stop sharing them. We want girls to keep thinking of new ideas, sharing them, and thinking about ways that they can solve really important and global problems through their ideas."

She said that one thing that stops many girls from pursuing STEM fields is that they're often perceived as boring.

"STEM is the least boring thing in the world," Hudgins explained. "It's all about coming up with new ideas, making them better, and then making them a reality. Girls are the best at this, and our voices have just not been heard. It's time to be heard! There are so many problems that need to be fixed. Your ideas can solve the world's biggest challenges!"

In the future, Girlstart hopes to grow its programs so that any girl in the nation will have the opportunity to enter GirlStart programs, regardless of where she lives or whether her family can afford it.

"It's a tough challenge," Hudgins said. "We need a lot of help to get there. But we know that girls value our programs, and that it encourages them to stay motivated about STEM, so we have to try to use our own ideas to see how we can bring more STEM fun to more girls. We are working hard to make it possible!"

Last December, Girlstart ran a month-long "DeSTEMber" campaign, including a fun STEM-related activity for each day of the month! Click here to check out the calendar and check out some of the hands-on activities they suggest to make STEM a part of your life!