At the end of May, my home office space got a bit of a remodel. My very favorite thing about said remodel is that I now have an electric kettle that sits right by the side of my desk, meaning a hot cup of tea is never more than 10 minutes away.

I've got pretty much everything I need—delicious teas in various flavors, instant decaf coffee, sugar cubes and honey—but when it comes to creamers, I've had to resort to powdered Coffee Mate in order to forego a visit upstairs to the fridge, which isn't ideal (especially when it comes to perfecting that steamy cup of earl grey).

I thought I was stuck—that is until I was contacted by the folks behind Goodmylk Co. The brand makes plant-based milks (and creamers!) that are designed to be good for you, and good for the world as a whole. I thought they would be the perfect addition to my new setup, and happily agreed to try out their activated powder creamers—and I can safely say there's no going back to Coffee Mate now.

Goodmylk Co.'s plant-based "mylks" are designed around the idea that everyone deserves access to good food, and that what you put in your body should leave you feeling great, too. They aim to set high standards with their organic products, ensuring that they never use gums, artificial flavors or unpronounceable ingredients.

Their powdered creamers, in particular, are designed for youth, longevity and clarity. Both their Almond Activated Creamer and Super Oat Activated Creamer include adaptogens, including reishi for immunity, lion's mane for mental clarity and focus, astragalus for energy and tocotrienols for healthy, glowing skin. They're made with only the most essential ingredients, but are also designed to taste delicious and turn your morning coffee or tea into a premium experience.

Because Goodmylk Co.'s creamers are made with real ingredients, they don't just instantly dissolve in water. You'll want to stir them super thoroughly until they've transformed into a smooth and creamy foam, and for that reason, I was sent Goodmylk's Electric Frother along with their activated creamers.

I instantly loved the frother's sleek design (and the fact that it had a lid, for cleanliness's sake), as well as the fact that it was rechargeable. I simply had to charge it up via USB cable (I plugged mine right into my computer) before use.

From there, using it was super easy. It turns on at a low speed with the push of a button, ramps up to its top speed when you press it again, and then turns off when you press it a third time. I've found that it instantly turns any coffee or tea into a frothy delight, topped with gentle foam, getting thicker and creamier the longer you use it. Of course, I definitely recommend learning to use it with a larger cup than you think you'll need, because the frother can stir up quite a mess if you're not careful.

If there's one downside to the whisk, it's that you can't bypass its second speed, so if you intend only to whisk on the lowest power, you have to press the button twice, as quickly as you can, to not be on the highest setting for too long. Still, I love this thing. I already owned a battery-operated whisk, but this one is more powerful and rechargeable, which is much better for the environment. I'll definitely be retiring the old one in favor of this Electric Frother. 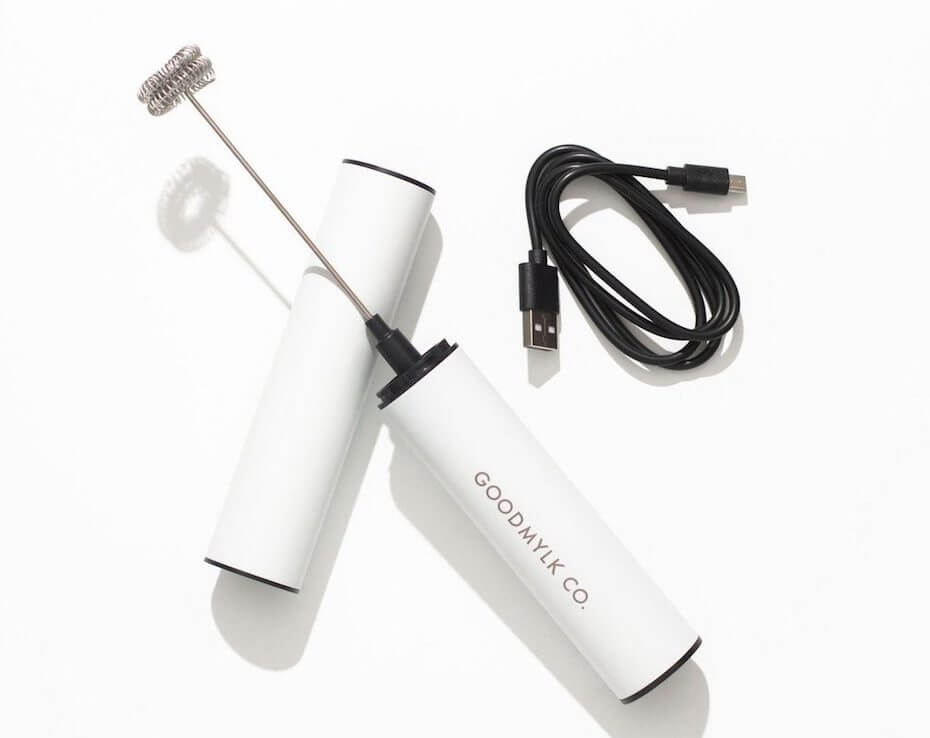 Now, for the creamers themselves. When I opened the jar for the Almond Activated Creamer, I found that the creamer looked more like brown sugar than any creamer I'd seen before. It definitely wasn't the powdered sugar-like coffee creamer I was used to, which makes sense given how natural it all is. Its only ingredients are almonds, Himalayan salt, the adaptogen blend and maple sugar, so you know exactly what you're putting into your body when you drink it.

And it tastes amazing, too. For my first run with the creamer, I brewed a very strong cup of Dona masala chai, before adding my sugar and two tablespoons of the Almond Activated Creamer and giving it a good whisk with the frother. With the help of the frother's motion (and the heat of the steaming tea), the creamer dissolved and turned the tea into a delightfully foamy latte. And it was delicious, too. The cup had the slightest hint of nuttiness but mostly allowed the flavor of the tea to shine.

But better yet, drinking this makes me feel amazing. Maybe it's all placebo effect, but when I take the time to do this morning (and afternoon) ritual, I feel more focused and honed in, as well as less distracted, and I simply get more done. I've since repeated the process with rooibos teas, matchas and even herbal teas, and every time, I've loved how luxurious the resulting latte was—and how I felt after drinking it. I'll be pretty sad when I run out—but at least it comes in a super fancy tin I'll probably be able to repurpose once I do! 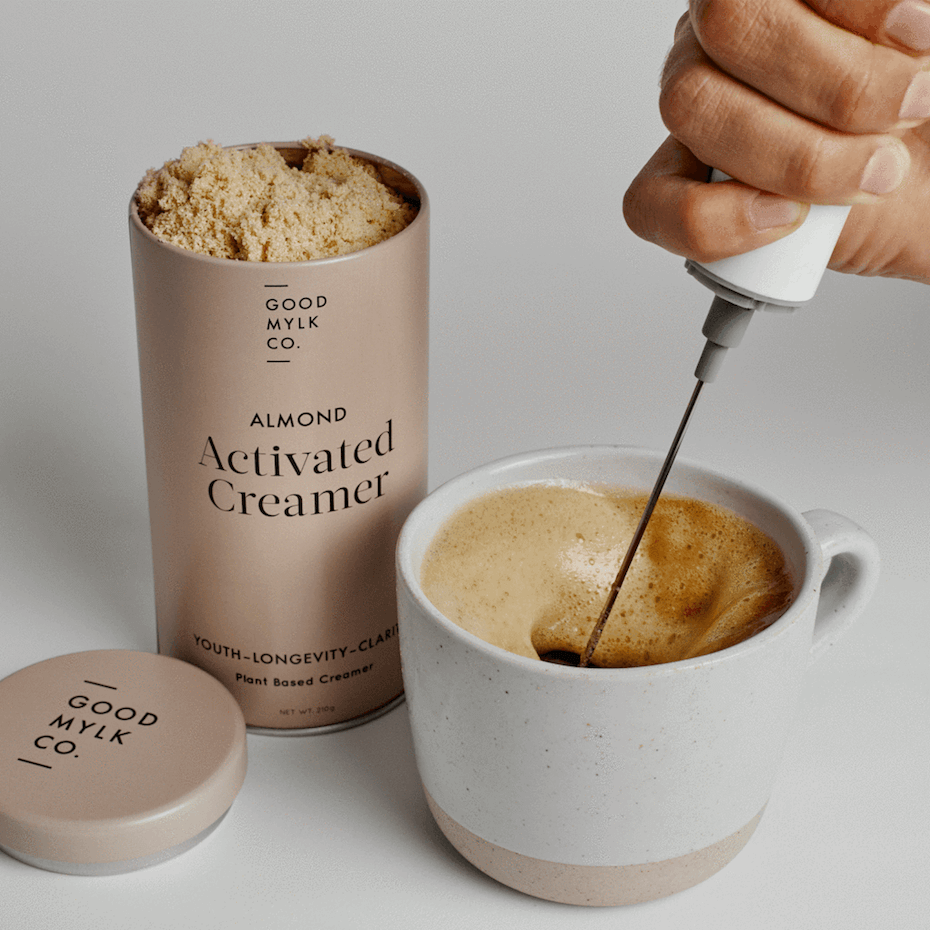 I've heard some wonderful things about oat milk but had never had the chance to try it myself, so I was very much looking forward to testing out this Super Oat Activated Creamer. When I opened the tin, I found that it looked even darker than the almond creamer, and the grains even looked a little thicker, leaving me curious about if the experience would be similar. Again, the ingredients in this creamer are super clean, including just oats, tiger nuts, dates, Himalayan salt and the adaptogen blend.

I repeated the same process as I had with the almond creamer, this time adding it to a blend of lavender earl grey, and yet again, after the frothing process, the result was a marvelous latte with all of the foam I could have ever wanted. I think I liked this oat creamer even better, thanks to its slightly richer texture and a hint more of saltiness, as well as sweetness, and I've also enjoyed this creamer a lot to elevate my instant decaf coffee to greatness. Plus, it makes me feel just as good as the almond creamer does, which I adore. 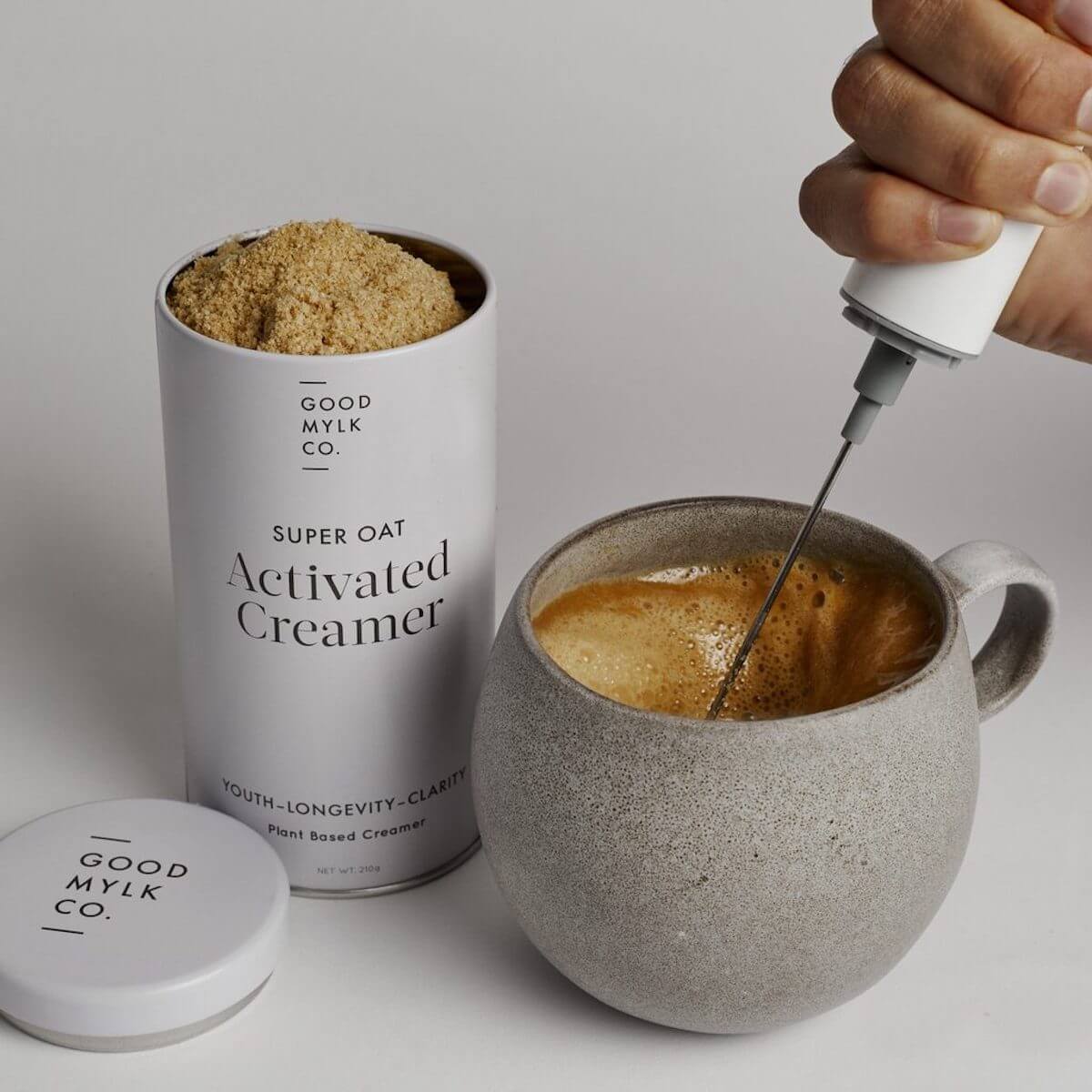 Goodmylk Co.'s activated creamers are a bit of an investment, and definitely luxurious, so if you're looking for that premium coffee or tea experience from home, so you don't have to make daily trips to Starbucks, I highly recommend it. I think their frother is the perfect complement to the creamers, and while they're not cheap, the creamers themselves warrant the price because of their clean ingredients and the delicious results you can achieve with them. If you're not a fan of plant milks, or you just don't like lattes in general, these might not be for you. Otherwise, I don't think you'll regret giving Goodmylk a try if it's within your budget.

Not sure what tea you want to use with Goodmylk first? Click HERE to read my review of DONA's loose leaf teas and chai concentrate.