18-year-old Gracie Gold is a figure skater from Illinois whose talents made her a top contender at the 2014 Winter Olympics, winner of the 2014 US Championship and World Figure Skating Championships in Saitama, Japan! 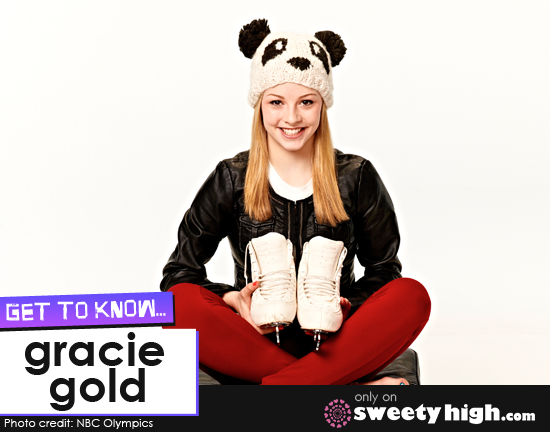 We recently spoke with Gracie about her beginnings in the sport, her biggest influences and what it's been like to take part in the world's biggest skating competitions!

Gracie Gold started skating when she was 8 years old.

"After attending a friend's birthday party at the local ice rink, I was hooked!" she said. "I begged my mom for lessons so she enrolled me in a weekly 'Learn To Skate' program. The more I skated, the better I got, and the better I got, the more I wanted to skate."

She was especially drawn to figure skating and the way it perfectly fused athleticism and the chance to express herself artistically.

"It's very difficult at the elite level and I have been frustrated at times, but it's never taken away my basic joy of skating," she said. "I think that's what fuels my passion."

In 2010, Gracie was competing at the U.S. Championships as a novice when the Olympic team was selected.

"I think that was when I first felt the Olympic Dream was possible for me," she said.

Earlier this year, her years of hard work helped bring her to the 2014 Winter Olympics in Sochi, Russia.

"I had so many emotions leading up to my performances in Sochi," she said. "Just qualifying for the team took me on a roller coaster of emotions. The U.S. Championships, during an Olympic year, is arguably the most intense competition that an American skater will ever face."

Pressure was even higher because of media attention around the event. In order to succeed, Gracie had to really excel.

"Most days, I felt pretty confident," she said. "Still, there were moments of doubt as the competition loomed closer. I was simply euphoric when I won the title and earned my berth to the Olympic Games!"

Though the Olympics were a somewhat stressful time, Gracie said the rewards were well worth the experience.

"To represent your country at the Olympics is the greatest honor an athlete can have," Gracie said. "I welcomed every day of training! There was a lot of pressure leading into the Games, but mostly it was a sense of excitement."

Her first event at the Sochi Olympics was the team figure skating event. The performance brought home a bronze medal for the U.S.!

"Standing with my team for the awards ceremony was the proudest moment of my life!" she said.

Her unique talents as a figure skater helped her be part of the winning team.

"The thing that has set me apart from other skaters has largely been my athletic abilities," she explained. "I am very fast with great jumps and spins. I have been working very hard to develop the other aspects of my skating, such as interpretation of the music and connecting emotionally with my audience."

"Life has been a whirlwind since returning home from Sochi," Gracie said. "I have had so many opportunities and invitations. It's been a wonderful and celebratory time."

Gracie also had the chance to attend the Indy 500 and ride along in a race car with driver Mario Andretti at 190 miles per hour!

"Now, that doesn't happen to a girl everyday!"

Asked about her biggest inspirations, Gracie had a long list of influences.

"My coach, Frank Carroll, is one of the greatest skating coaches of all time," she said. "I'm very lucky to have him to guide me. He has so much experience and insight. In addition to being a great coach, he's just a really wonderful person."

She added that she is inspired by 2010 Olympic champion Evan Lysacek, and 2014 Olympic gold medalists Meryl Davis and Charlie White.

"I love training with Evan. He has an incredible energy about him. He pushes me to do my best," she said. As for Meryl and Charlie, Gracie said, "They are incredibly kind and supportive to those of us just coming up in the sport. They have each helped me so much!"

She also thanked choreographer Lori Nichol, Dr. Jenny Conviser, and her family for always believing in her, even when she doubted herself.

"There are so many people who have reached out to me and given me inspiration and guidance," she said. "I am very grateful to them all."

Gracie also looks up to Taylor Swift as a role model.

"I admire her incredible talent and style, of course, but also her integrity," she said. "She's managed to achieve huge success but remain true to herself. She is a class act."

Gracie Gold also happens to be a big advocate for girl power!

"For me, it has meant refusing to accept the limitations that others attempted to place on me," she said. "By believing I could do more, I was able to achieve success."

Gracie aims to continue to skate competitively and be able to compete in the next Winter Olympics.

"I want to win a World title along the way to my next Olympics," she said. "I plan to take college classes part time and be open to opportunities that present themselves."

You can also vote for Gracie for Best Female Athlete in Nickelodeon's Kids Choice Sports awards! Click here to vote!

To keep up with all of the latest from Gracie Gold, be sure to check out her social pages below! You can also join us at SweetyHigh.com to tell us about your favorite athletes or share your own athletic endeavors!