Grayson Thorne Kilpatrick is one of the most prolific young actors we know, with dozens of credits to his name and some even bigger projects on the horizon.

While we know and love him best for his role in Chicken Girls: The Movie acting alongside some of our all-time favorite influencers, he's also acted in numerous films and shows, including FX's Dave and the upcoming N16 on Roku,  alongside veteran actors who've passed some of their incredible knowledge on to him. In this interview, we got the chance to learn all about Grayson and some of the things that make him one-of-a-kind. 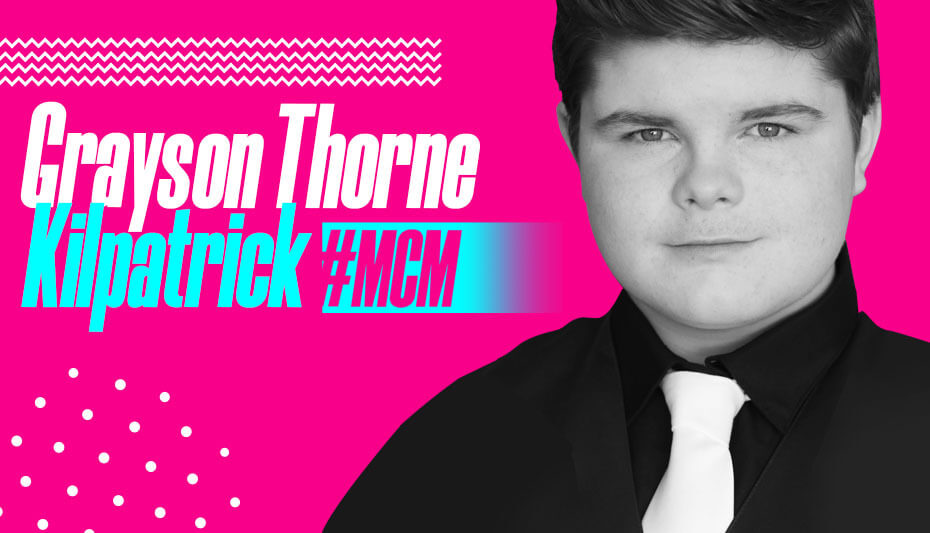 1. Grayson says he isn't much of a morning person.

"I love to stay up late playing Xbox with my friends. Some of my friends are all over the world from Los Angeles, Canada, London and Alabama so the time zones are all over the place. I love having that time talking to my friends and playing. Especially now with the quarantine, I definitely have my days and nights switched."

3. If he weren't an actor, he'd love to be an automotive engineer—and both of his parents are engineers, too.

"My dad is a mechanical engineer who worked for NASA before moving to Los Angeles and my mom is an engineer working in the space industry. I still plan to go to college and get my engineering degree while pursuing my career in acting."

A post shared by Grayson Thorne Kilpatrick (@graysonkilpatrick) on May 9, 2020 at 2:33pm PDT

4. Grayson is really into cars. Lamborghinis are his favorites—especially the 2018 Lamborghini Urus—but he's also a fan of the 1981 Toyota Tacoma and 2020 Karma Revero.

"I am saving up for my first car and I would like to get a 1971 Pontiac Trans Am in white with a blue stripe."

5. Grayson is obsessed with Rubik's Cubes.

"I currently have about 200 cubes in all shapes and sizes. I have one with me almost all the time. For me, it's kind of like the fidget spinners from a few years ago that helped with sensory concentration. I actually took one with me on the set of Good Morning La La Land because it helped me not be nervous. They asked me about my Rubik's Cube and I showed them how to solve a 3×3."

A post shared by Grayson Thorne Kilpatrick (@graysonkilpatrick) on Apr 9, 2020 at 1:29am PDT

6. He considers Campin' Buddies, directed by Tom Logan, to be a huge moment in his career. Not only was it Grayson's first film, but he got to work alongside veteran actors including Tom Lester from Green Acres, and Ray Stevens and Victoria Jackson from SNL.

"I think you always remember your first film. They were all so nice to me and treated me like a professional actor, like I was one of them."

7. Other favorite moments include working with Shia LaBeouf in Man Down and with Mark Wahlberg in Daddy's Home.

8. He's a big comic book collector, and even though he likes DC he's more of a Marvel fan.

"It's my dream to one day be in a Marvel film. Maybe I could get a trainer like Chris Evans had to become Captain America? Being Marvel, they have intense training. I would do it, for the chance to see my dream come true of being in a Marvel movie. I love Stan Lee. I have a few of his comics that he signed for me, and I was so sad when he passed away. We lost a legend."

9. His best subject in school is math, which he thinks runs in the family. His worst subject is language arts.

"I do not care at all about the analysis of poetry. My tutor tells me this is just being a boy. I love writing scripts and being creative, like writing my short film John Foley: Motivationally Speaking. But when it comes to poetry and Shakespeare, I look like a deer in headlights trying to figure that out."

10. He's surprised how well his zodiac sign, Aries, describes him.

"I looked up Aries, and a funny fact is that the spirit color is red, which is my favorite color! Polarity is positive, and I try to be positive in all situations."

11. Grayson has been through a lot, including a home invasion when he was three, and a superstorm in the southeast, including a tornado that just spared his home, but his amazing parents got him through it and are responsible for the person he is today.

"My mom and dad have given up a lot to move our family here to L.A. for me to live out my dream of being an actor. We lived in a huge house in Alabama with lots of land, and I miss being able to go outside in my own yard a lot. I loved the county living. We moved to Southern California in 2016 and there were a lot of things to get used to. It was kind of a culture shock. However, this is home now. I just want to be on set and act."

12. Grayson believes strongly in the power of positivity and moving forward.

"I look back at things I've done in the past and wonder, 'What was I thinking?' I know I have made mistakes in the past, but that is what makes us human. We all make mistakes. We can apologize to the ones we made those mistakes with and move on. We can't allow mistakes in our life to define us. We have to move on and stay positive and be encouraging to others."

13. Grayson is forever grateful for the people who love his acting.

"Thank you to all my fans who support me and encourage me on this adventure to be an actor in the best place in the world: Hollywood."