Morgan Guess is the 10-year-old co-founder of the Guess Anti-Bullying Foundation, which she started after facing her own harrowing experiences with bullying. 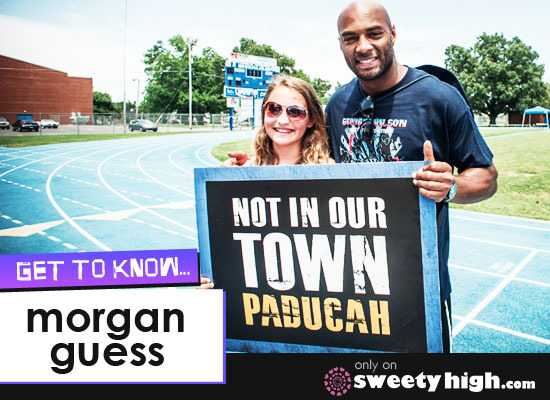 In the past, Morgan has shared her experiences with the Huffington Post and CNN. Morgan also spoke with us at Sweety High to discuss bullying, and how she plans to bring the fight against bullying to the Kentucky government.

Morgan was just 8 when a classmate starting bullying her.

"She would pull my hair and pinch me," Morgan said. "She wouldn't let me play with any other friends."

The bullying got so bad that Morgan started having panic attacks and become physically ill. Before the end of the school year, her doctor suggested that Morgan be removed from her school because of her emotional state.

"The worst part was never knowing when it was going to happen," Morgan said. "Sometimes she would just intimidate me and scare me. That was just as bad as when she would hurt me physically."

At first, Morgan didn't tell anyone about the bullying. She was afraid it would make the situation even worse.

"Now I know it was never going to get better without help," she said. "One of the most important lessons I learned was that I have to tell someone when I am being bullied and I hope other kids understand how important it is to ask for help.

When she finally opened up to her mother, Susan, she was told that everyone will face up to negative situations in their lives.

Morgan started working toward that solution by setting up an anti-bullying fund with her mother through a local community foundation. They have now raised almost $30,000.

In the beginning, there were a few obstacles to getting the Guess Anti-Bullying Foundation off the ground.

"People were afraid to talk about bullying and felt like I was making a school look bad," Morgan explained. "Fear stops action."

Then, Morgan's goal was just to raise enough money to bring New York Times bestselling author Jodee Blanco to her hometown of Paducah, Kentucky. Blanco's Please Stop Laughing At Me … One Woman's Inspirational Story inspired a movement to put an end to bullying.

"As our work grew so did our commitment to creating change," she said.

Most of the $30,000 came from local companies and individuals who were passionate about Morgan's fight against bullying. She believes that the Guess Anti-Bullying Foundation's approach to tackling bullying has paved the way to success.

"While we believe in holding bullies accountable, our message has always been a positive one," Morgan said. "We have not attacked the bully or schools. We believe the issue is bigger than the schools and about all of us."

The foundation's positive focus has brought the community together and united the region against bullying.

Morgan's foundation has also become closely tied to the 2011 documentary film Bully. They placed third in a national social media contest to win a free screening of the film for their community, which the movie's director, Lee Hirsch, attended.

The foundation also buys Bully educational took kits for any schools in Kentucky who will use them.

She also got the chance to travel to New York City to volunteer for the offices of the film, where she responded to questions other kids had sent in.

Morgan and has also spoken twice on Kentucky Education Television, has presented at Murray State University and was named the Bully Project Upstander of the Week after her nomination was shared over a thousand times and earned more than 7200 likes on Facebook.

The foundation's slogan is "Not In Our Town," encouraging a zero-tolerance policy on bullying in Paducah. They have distributed "Not In Our Town" bumper stickers and t-shirts, and recruited people to hold up a sign bearing the slogan. Football player George Wilson of the Tennessee Titans is one of the many to participate.

Morgan starred in a play called "Bullies Anonymous," was named a Youth Service Agency "Everyday Hero," won the Kentucky Youth Volunteer Service Award, and was a Kohl's Cares regional winner for her service.

She has also led anti-bullying marches, hosted celebrity speakers, and worked with disadvantaged kids at a local church to stand up against bullying. For all of this she was also given the Governor's Youth Volunteer Service award.

"I am very proud of that award but mostly because it brings recognition to our work," Morgan explained. "The more our work is reported and shared, the more the conversation continues and the more opportunity we have to help someone."

Their next goal is to convince Kentucky governor Steve Beshear to appoint a statewide task force on bullying.

"We believe Kentucky can lead the way for other states," she said.

The foundation has received many letters of endorsement from all across Kentucky helping Morgan's bid to encourage the governor to appoint a statewide alliance on bullying.

"The beauty of this work is that it isn't about me," Morgan said. "It is about my story and that story has kept the conversation alive and is bringing people together."

In October, Morgan teamed up with CNN to campaign during anti-bullying month.

"I love that a month is designated for bully prevention but am a firm believer that we need to be working every day to change the culture of bullying," Morgan explained.

CNN included Morgan's foundation in one of their stories, and toward the end of the month she was a part of a CNN Google Hangout alongside Big Time Rush actor Steven Glickman.

"He promised to make a trip to Paducah and I am going to hold him to it," Morgan said. "He is doing a lot on the subject and is passionate about the subject as I am!"

Morgan and her mother also wrote an op-ed piece for the Huffington Post about Morgan's experiences.

"I didn't know at first what a big deal the Huffington Post is!" Morgan admitted. "Everywhere I went, people were congratulating me and telling me how special that opportunity was."

"I am grateful for sharing my experience with bullying," Morgan said. "I have a voice and that I can use it for good. I believe change is happening because of my work and I am working to create a nicer world."

Keep up with Morgan's work on the Guess Anti-Bullying Foundation's  Facebook page!

Also stay tuned for our next article on Morgan, and see what advice she has for dealing with bullying, and join us at Sweety High if you want to join the fight against bullying, too!