Sink Your Teeth Into These Spooktacular Halloween Cupcakes

Halloween and candy have always come hand-in-hand. It's tradition.

But this year, why not spice things up? Instead of Kit-Kats and Butterfinger bars on All Hallows Eve', sweeten up your night by dishing out an even more spooktacular confection: cupcakes.

Gather your cauldron and baking gear and head into the kitchen to bake these 13 treats that are creepily cute. ????

Although this Frankenstein cupcake aims to be spooky, it's insanely adorable. This bad boy, which is made with a Reese's Peanut Butter Cup, M&M's, chocolate chips, sprinkles and green frosting is sure to delight anyone with a sweet tooth. Make a batch of your own little monsters by following the recipe HERE. 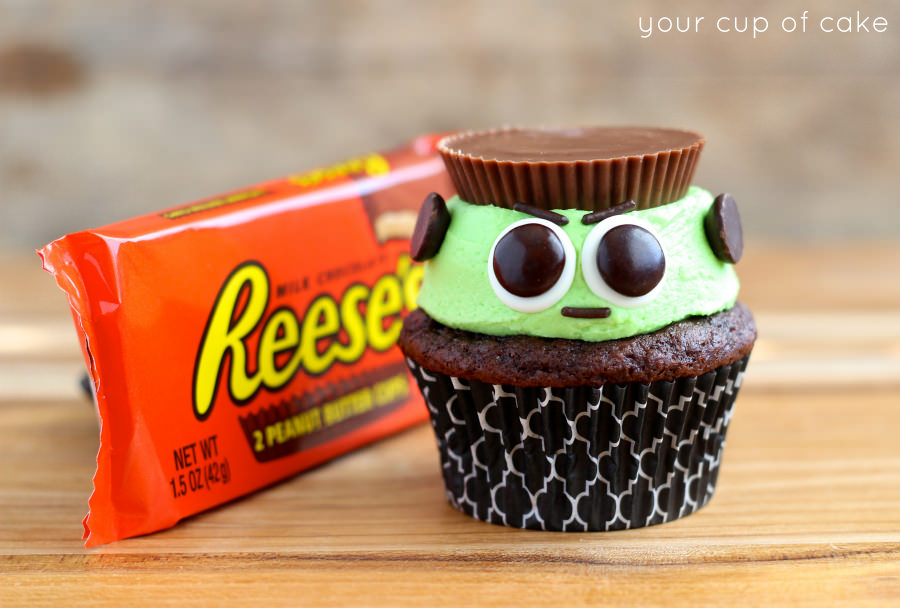 (via Your Cup of Cake)

These melted witch cupcakes inspired by the Wicked Witch from The Wizard of Oz are a nice addition to any Halloween dessert table. The recipe calls for two of our fave chocolate treats (Oreos & Hershey's Kisses), so we can only imagine how delectable the cupcake must be as a whole. Because you can't cast a spell and wish these into existence, get baking by following the full recipe HERE. 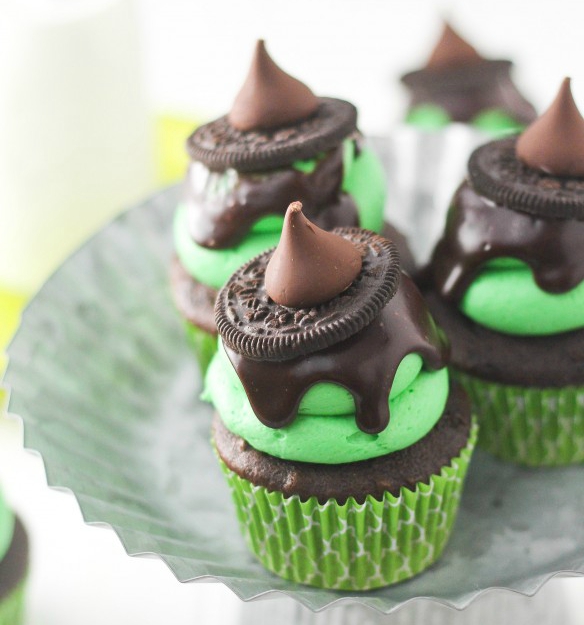 (via Confessions of a Cookbook Queen)

What's better than a regular old cupcake? A cupcake cone—the perfect spin to a classic treat. Simply bake cupcakes into an ice cream cone and then frost the cupcake so that it appears as if there's ice cream on top. We're all about these boo-tiful ghost and candy corn versions that you can find the recipe for HERE. 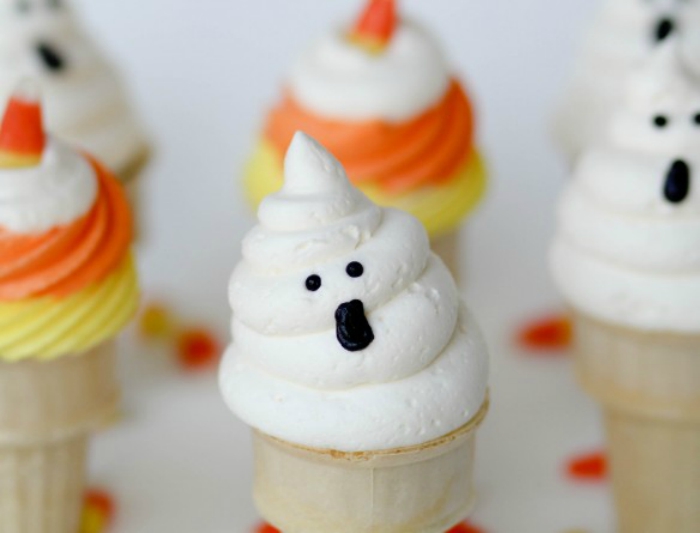 (via Confessions of a Cookbook Queen)

We can't think of anything creepier than a creepy crawler. These spiderweb treats, made from white chocolate and chocolate ganache, are relatively simple to assemble. The adorable spiderweb cupcake liners are just an added bonus. Full instructions for this dessert can be found HERE. 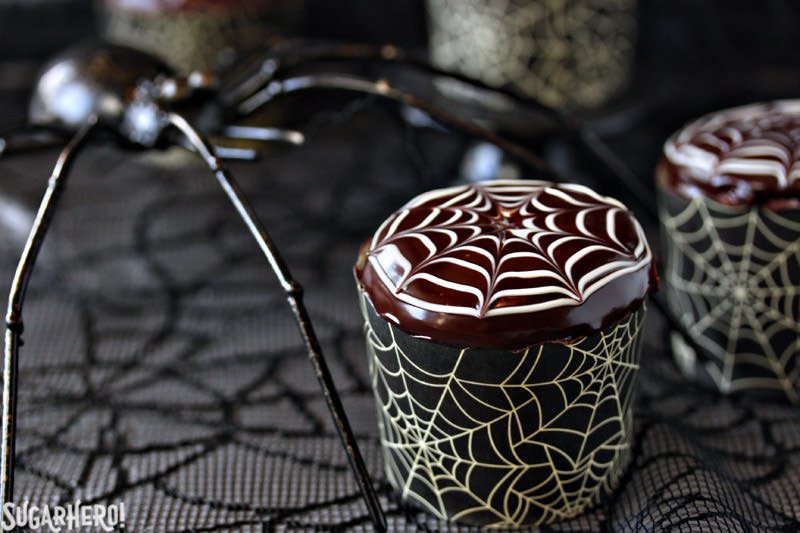 These mummy cupcakes are cute and supremely easy to make! All this recipe really requires is dark chocolate fudge cupcake mix, vanilla frosting, some sprinkles and your creative skills. Think you have what it takes to create these? Check out the recipe HERE. 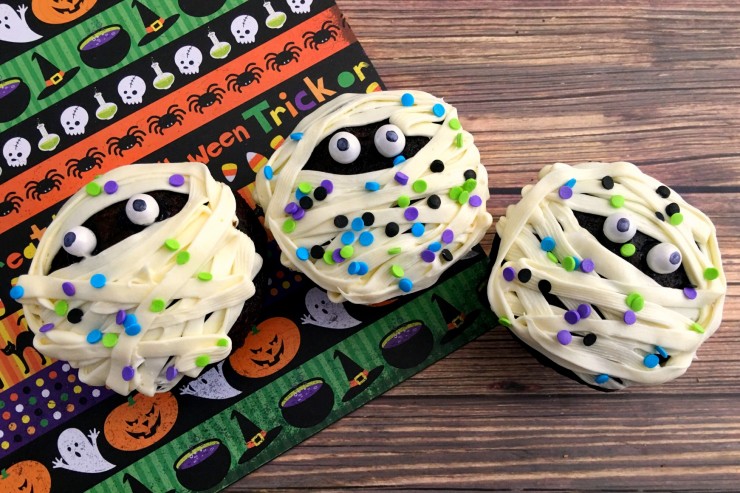 Nothing screams scary quite like a giant fuzzy monster claw. This spooky recipe calls for some grass frosting and marshmallow fondant to create the realistic-looking claws. Try not to shriek in terror when you take your first bite—these won't actually harm you. If you want to take a whack at making them, just follow the recipe HERE. 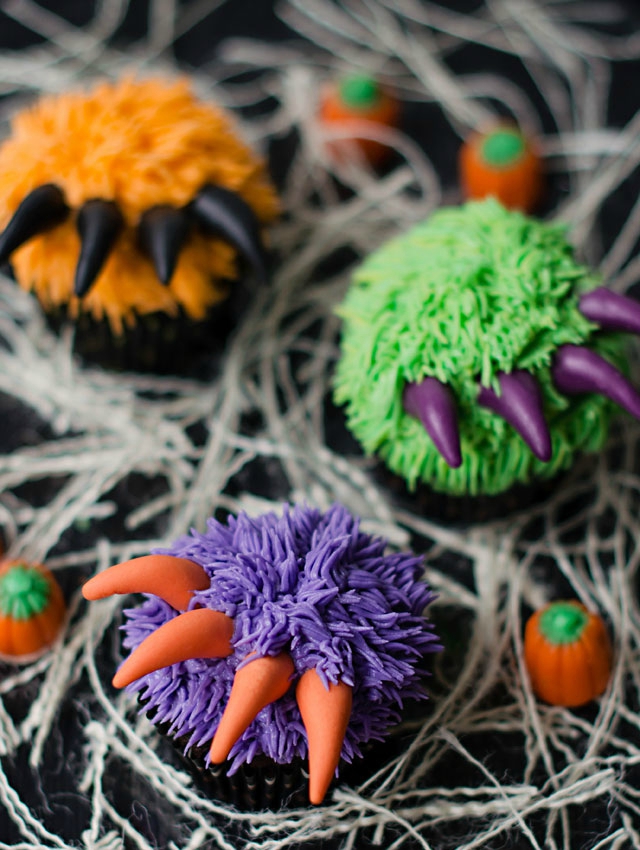 These silly, googly-eyed monsters will be sure to make anyone smile. If you're a fan of buttercream frosting, then this is the treat for you, because, as you can see, there's three (yes, three) separate layers of creamy frosting on top of those cupcakes. To make these silly creatures, follow the recipe found HERE. 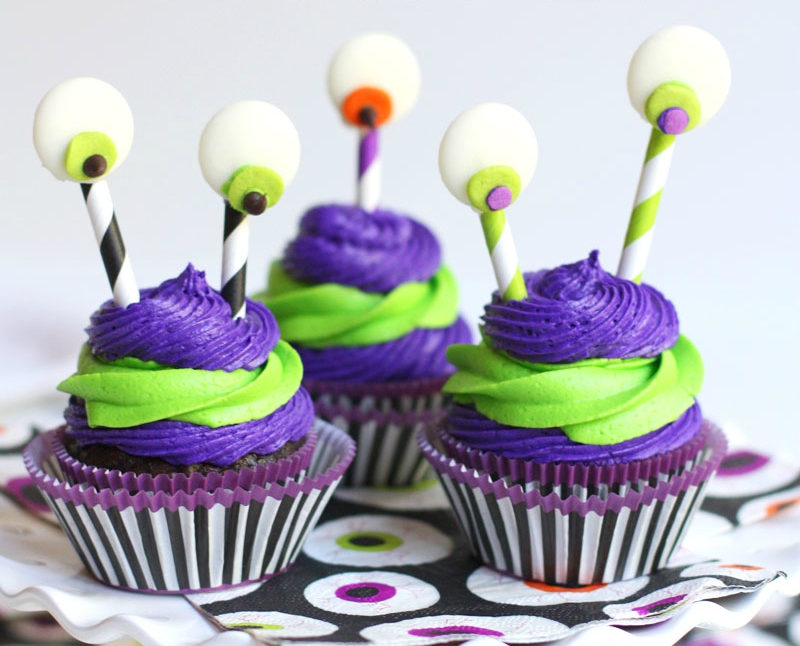 These zombie brain cupcakes are one part gruesome, one part genius. Don't let the creepy pink cream cheese frosting scare you off, these things are delicious. You can find the recipe and even get your own printable "Caution" carrier box HERE! 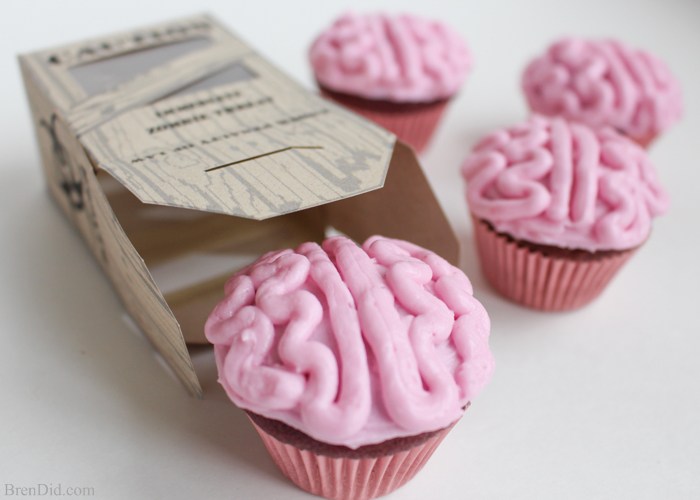 What's Halloween without a little skeleton action? These skeleton cupcakes are framed with a lollipop stick and some white chocolate pretzels, and then topped with a large marshmallow. The skeleton face is an added touch that can be easily drawn on with an icing pen. To get all the deets on this treat, see the full recipe HERE. 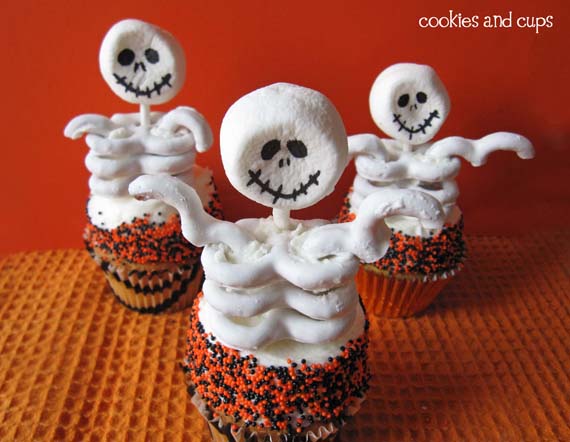 If you're really looking to scare the bejeebies out of a friend or family member, try whipping up one of these graveyard treats. The recipe itself is easy for those who aren't super skilled in the kitchen, and can be found HERE. 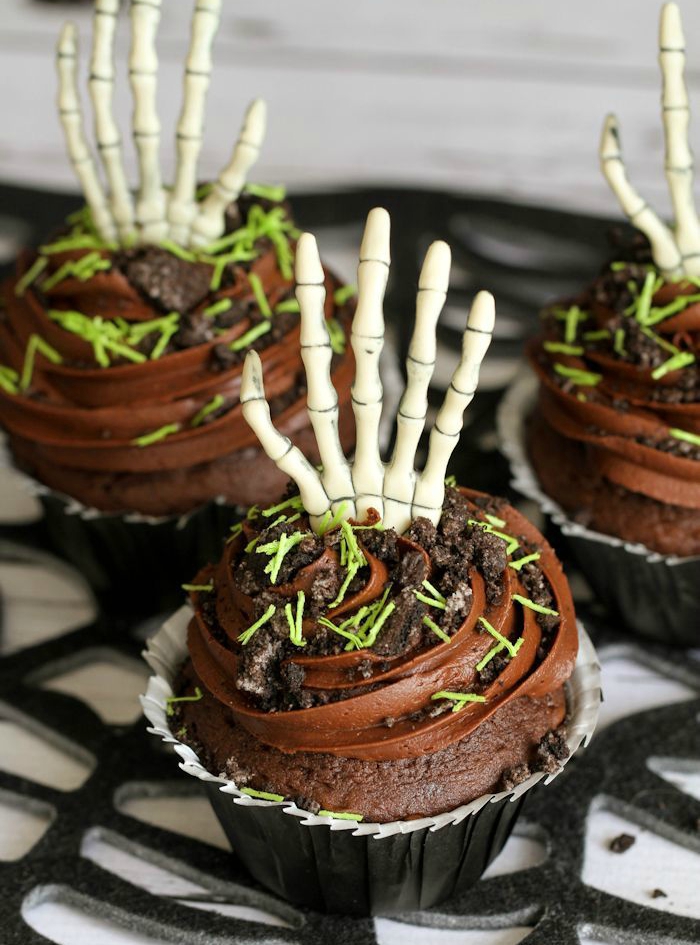 Although this creepy cauldron confection looks difficult to make, it's actually quite easy. You must be willing to splurge and purchase silicon cauldrons and some edible bats, bones and eyes, but other than that, this treat is easy to mix up. Get the full recipe HERE. 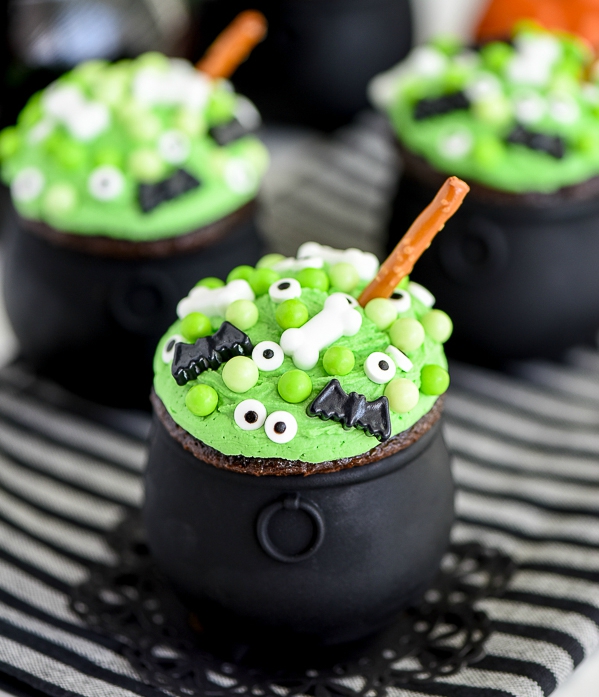 (via A Pumpkin and a Princess)

Halloween is not complete without a bat or two in the picture. This cookie-topped sweet treat is ideal for anyone who's keen on chocolate. If you're willing to try out this bat-tastic recipe, follow the instructions HERE. 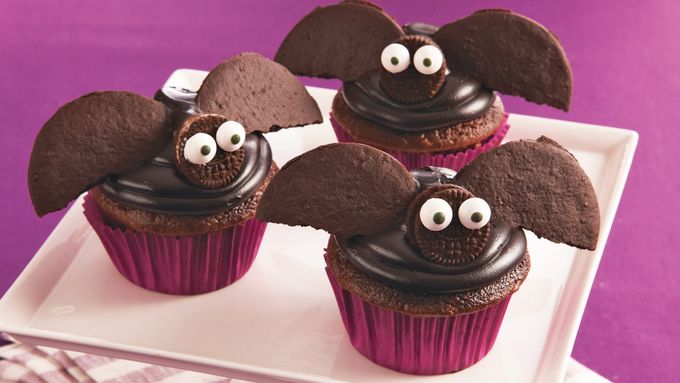 If you're eyeing a ton of dessert recipes, but can't decide on one, let this eyeball cupcake be your sugary selection. The gummy eye and blood-like frosting will be sure to spook you silly. The recipe can be found HERE. 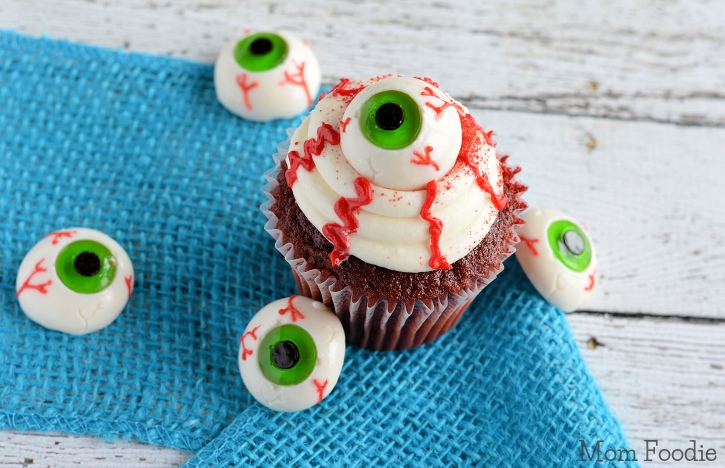 Now that you've got your Halloween treats in order for All Hallows' Eve, it's about time you choose your Halloween costume. Better yet, click HERE to let your zodiac sign determine what you'll dress up as this year.