When I first saw a trailer for Happy Birthdays on the Nintendo Switch, I didn't know exactly what I was looking at, but I was intrigued.

The game seemed to take place in a Minecraft-like world populated with tons of adorable plants and animals, and promised players the chance to build their own ecosystems in order to grow and evolve there. The title was silly, yet captivating, and I knew I had to play it. 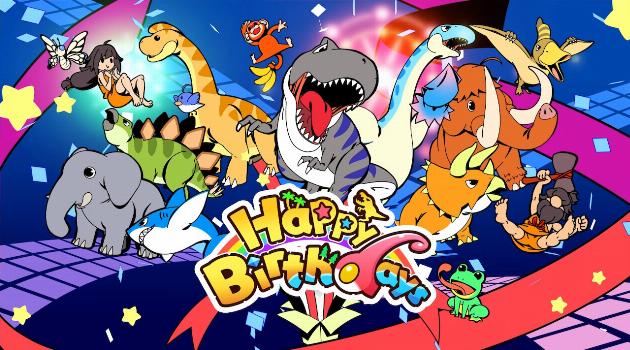 Lucky for me, Happy Birthdays publisher NIS America was able to send me a review code for the game so I could get my hands on it and see for myself what it had to offer.

As I started my first game, Happy Birthdays gave me the option to select from four different cubes with varying climates and conditions. I could select from a verdant green plain, a sandy desert with an oasis in the center, a totally blank stone prairie or an icy frozen landscape. Since the greenest one seemed like the beginner's option, I selected that and started on my journey. 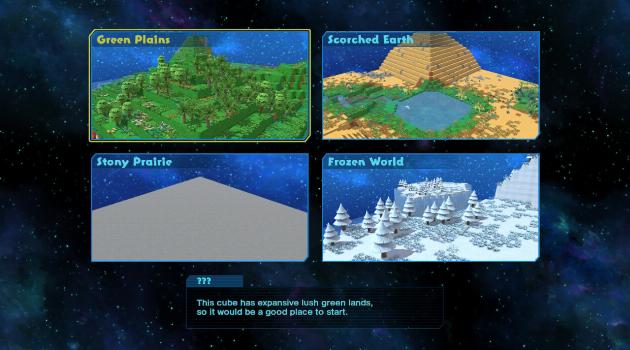 The episode began with a story about a treasure map, a bright guiding light and a cave, but ultimately the background story wasn't that important to the game. Inside that cave, I discovered a giant cube and met a spinning blue octahedron called Navi who wanted me to help it shape a new world.

This world inhabited one face of a cube, and I could alter it with the help of a red, caped alien, which was my avatar. The following tutorial showed me how to raise the land to create hills, or lower it below sea level to create oceans and lakes. I learned how to use special abilities to create vast valleys and towering mountains in an instant, and learned that more mountains would make my world colder, while more oceans would warm it. 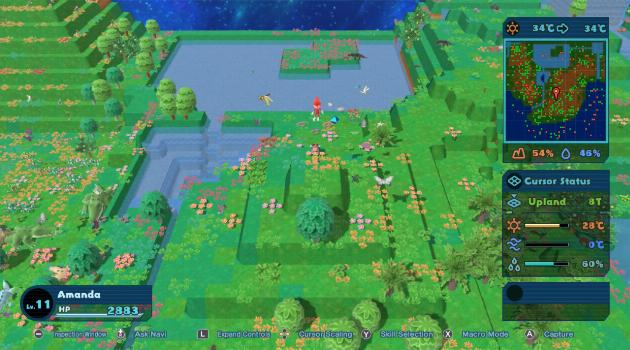 Next, I learned about how the world cube works. In the mode where my avatar could edit and change things, time was actually frozen. Only by taking a step back could I observe the world from afar and start time again, allowing the flora and fauna there to flourish or struggle, depending on how they were impacted by my world. I could also fast forward to see this progress happen even faster. In this mode, 10,000 years passed in a couple of seconds.

It was also important to note that each species has its own unique set of parameters within which it can thrive. Everything from the temperature to the elevation of the land and the amount of moisture and salinity in the water can impact whether a creature will be able to survive.

Basically, by shaping the land, I could manipulate the evolution of the creatures living there to create new species. I found out that my end goal was to turn this world of prehistoric life into the dawn of humans and the birth of civilization. That's where the real game began.

I still had a ton to learn after the tutorial. Without manipulating the landscape too much, I let the time fly by, simply observing. After 193,000 years of my cube, Navi wished a new species called Adelobasileus a happy birthday. This was a mouse-like creature that's believed to be the common ancestor of all of the mammals alive today. As it was born, I'd taken my first step toward creating modern civilization. 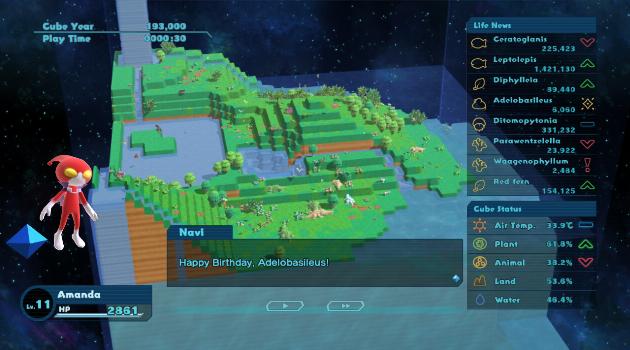 Next I helped a later form, Deltatheridium, come to being, but I had to get more hands-on to help other mammals come to be. I greatly lowered the temperature by growing mountains. More and more creatures and plants started inhabiting the world as others went extinct. Eventually, when the first primate, Eosimias, was born, Navi asked me to leave, and when I came back, the world expanded in order to make room to create modern humans. 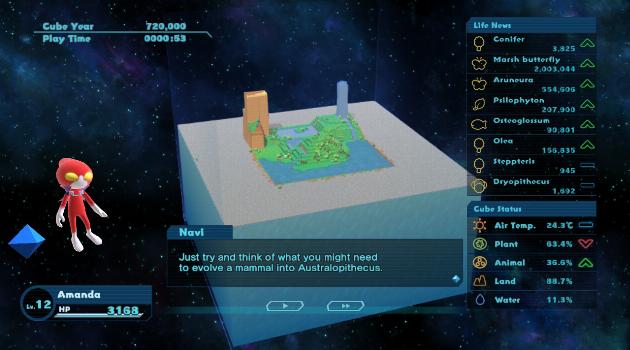 When Eosimias' ancestor arrived, I gave it an item called the Fruit of Knowledge, and soon the early human species Australopithecus was born. By making the world even colder, the first primates to use villages and fire came into existence. 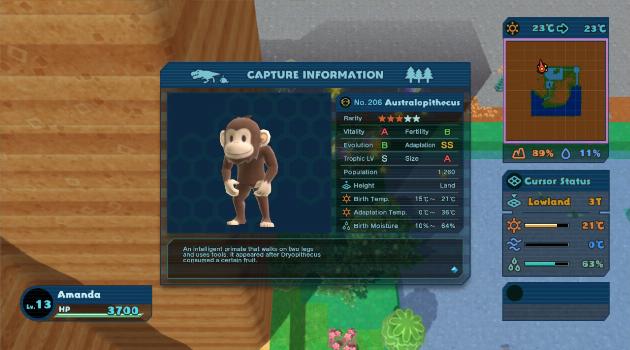 Next came ancient humans, but before modern humans could exist I had to meet a few conditions. I added more water to the cube so grass would grow around it. I also needed to grow wheat, but in order to grow wheat, I needed cows. I let time pass, and put a chain reaction in place that eventually birthed modern humans. 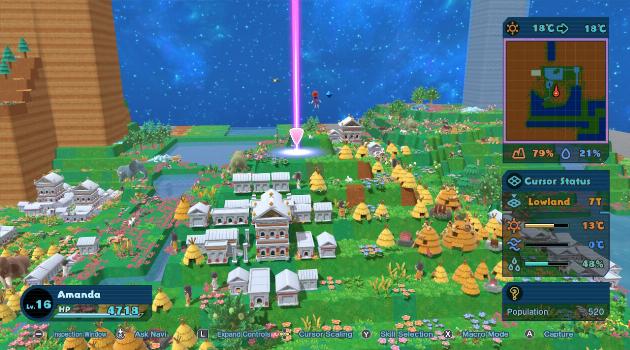 Finally, I reached the final "happy birthday"—and it only took me 1.6 million years to do it. The world was still populated by mammoths and all kinds of early humans, but it was mine. 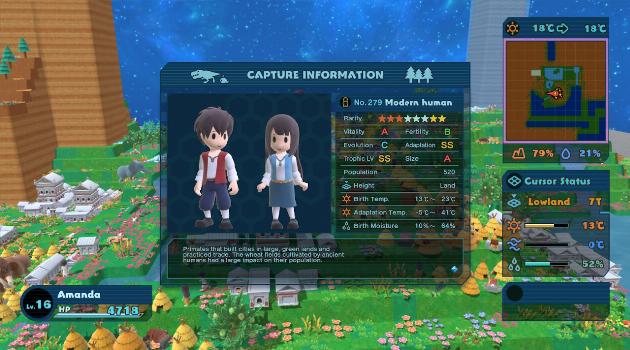 But this was just the beginning of my Happy Birthdays journey. From there, I was free to shape my world to my pleasing and bring forth the species that I wanted to see in my cube, but the game also offers other game modes. There are tricky Dinosaur Challenges that ask you to alter the ecosystem perfect for certain prehistoric creatures, and there's a freeplay mode where you can do whatever you like.

Overall, I've had a ton of fun with the game. It's a special life simulator on an epic scale that shows you just how complicated life is, even if it's super simplified for the game. I was also surprised to see how attached I'd get to the creatures in the game. Even when it was necessary, I lamented the species that eventually went extinct. 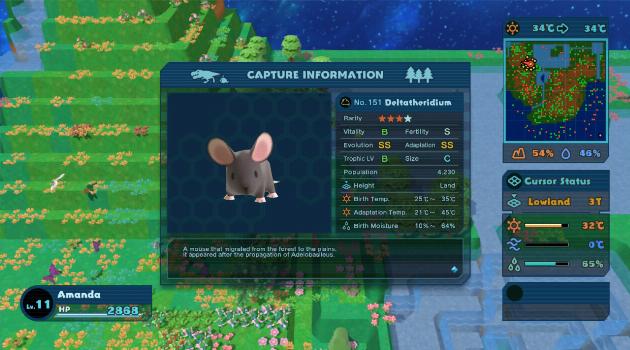 It helped that the game is super charming. Though Navi's talking can get a little repetitive, especially after the first playthrough, the world itself was simple and the creatures were all adorable. The game manages to be educational in a sneaky way, too. I constantly lost track of time while playing Happy Birthdays, thinking I'd spent 15 minutes playing it when my play time was closer to an hour.

Still, I think your mileage may vary. I happen to love learning about the origins of animals—and while I delighted in seeing my world grow and change, I anticipate some people will tire quickly of the gameplay.

My main complaint about the game actually has to do with the tutorial. Though it's very specific and walks players through all the steps, there's so much to the game that it's tough to take in. However, I found that once I jumped in and tried things out for myself, it was easy to figure things out.

If you're still unsure, just check out the trailer below.

Happy Birthdays comes out June 8 on the Nintendo Switch for $39.99.

If you're open to discovering some more innovative games on the Switch, click HERE to read my review of Yoku's Island Express.