The biggest rivalry at Hogwarts lives on.

Even now, the actors from the series haven't quite let the feud go. When former co-stars Matthew Lewis and Tom Felton recently got together, they couldn't resist bantering about their characters' Hogwarts Houses. 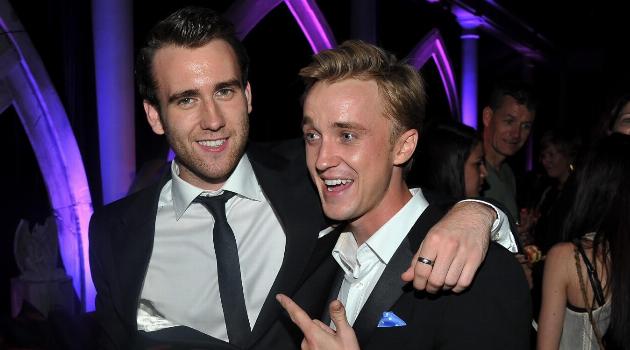 Both Matthew and Tom posted photos of their reunion on Instagram over the weekend, and they jokingly embraced the animosity that we saw between their respective characters, Neville Longbottom and Draco Malfoy, in the eight-film series. In both photos, Tom has what looks like a Slytherin backpack in hand that he's trying to force on Matthew.

"See how close he was to converting…" he wrote, alongside the hashtag "#gryffindork."

See how close he was to converting…. @mattdavelewis #gryffindork

Matthew, on the other hand, made it clear he wasn't turning his back on his school family. "Take your Slytherin paws off me," he wrote in his caption.

Aww. It's really all love, and how cute is it that they're still proud of their Hogwarts roots? They should be—no matter what house they represented.

There are so many great characters in the Harry Potter series. Click HERE to read our ranking of the 30 most notable ones.