For the past few months, I've been really good about going on daily walks and playing Pokémon Go. However, when today's news dropped that Niantic's Harry Potter: Wizards Unite had dropped a day early, I knew I had to download the new app and take it for a test drive, instead.

While I was planning a more traditional review of the app, I couldn't help but compare it to the Pokémon game I know and love as I played it. Here's how the two titles stack up against each other.

There's a lot to the story of Harry Potter: Wizards Unite, including a lot of new wizarding world terminology that might take even the most diehard Harry Potter fans to nail down. You take on the role of a wizard who's newly joined the Statue of Secrecy task force, whose entire job is to prevent the Muggle world from ever learning about the existence of magic.

It turns out you've started at just the right time, because a mysterious force called the Calamity has arrived. It seems to be stealing people, objects and memories and placing them randomly all across the world. Since magic always leaves a big, glowing trail in its wake, the Calamity threatens the Statue of Secrecy. But by finding these "Foundables" in time and casting the right spells to bring them back to their rightful places, you can keep the magical secret safe. 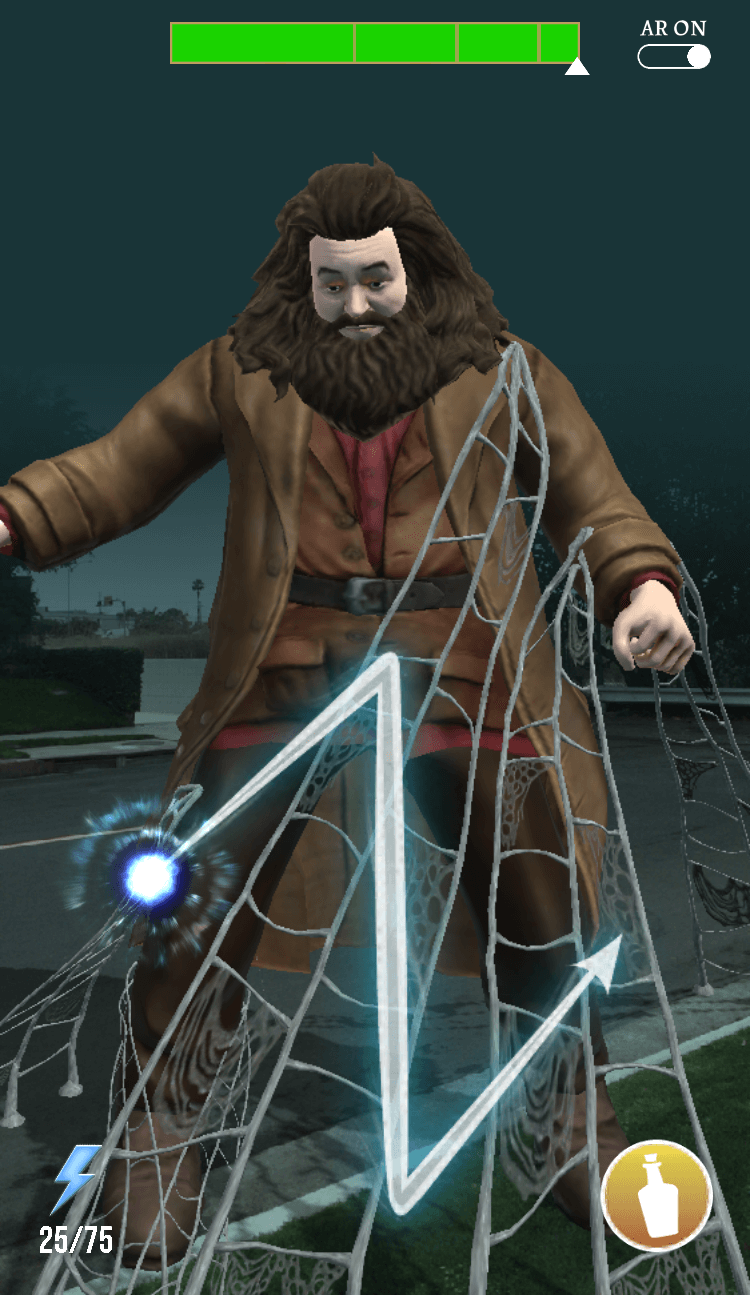 It's a lot of new information, regardless of your familiarity with the world. Pokémon Go, on the other hand, is mostly about collecting and battling Pokémon, and doing some research for a scientist along the way.

So far, the goal in Wizards Unite appears to be filling up your Registry, which is a list of all known Foundables (kind of like Pokémon Go's Pokédex). Each Foundable belongs to a category, such as Magical Games and Sports, Care of Magical Creatures or Dark Arts, and each one has a different symbol. When you see one of these symbols on your overworld map, it takes you to a screen where you can address the issue at hand (similar to the Pokémon capture dynamic).

As you enter these scenarios, you'll find each Foundable being held back by some different kind of barrier called a Confoudable. These range from sticky webs to flames or even nasty guardian troll, and they'll all trying to prevent you from getting your hands on the Foundable. Every Confoundable has a Threat Level meter which basically indicates how difficult it will be to remove. While you can turn the AR camera off and just capture them on a generic background, it's a delight to turn it on and see the scenes unfold within the real world. The animations are incredible-looking, and the AR almost makes it feel like it's happening in front of you. 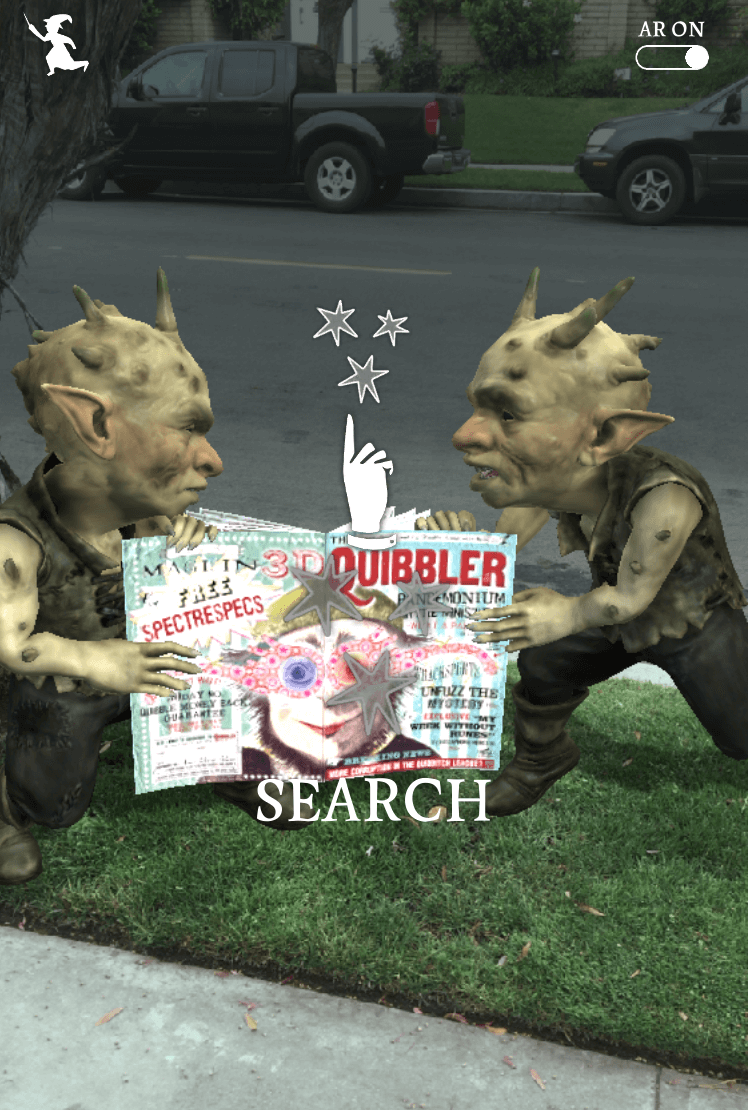 In the AR mode, to start the fight, you line up some stars on screen with the stars on the Confoundable. This allows you to place a spell by tracing a shape on the screen. Depending on how well you replicate that shape, you'll perform a more effective spell. From there, you might overpower the Confoundable and return the Foundable to its proper place, or the magic can resist your spell and it'll ask you to try again. Every time you do a spell, it uses up energy, so you have to make your decisions wisely. There are also times when they both retreat entirely, making you lose your shot at retrieving the Foundable. 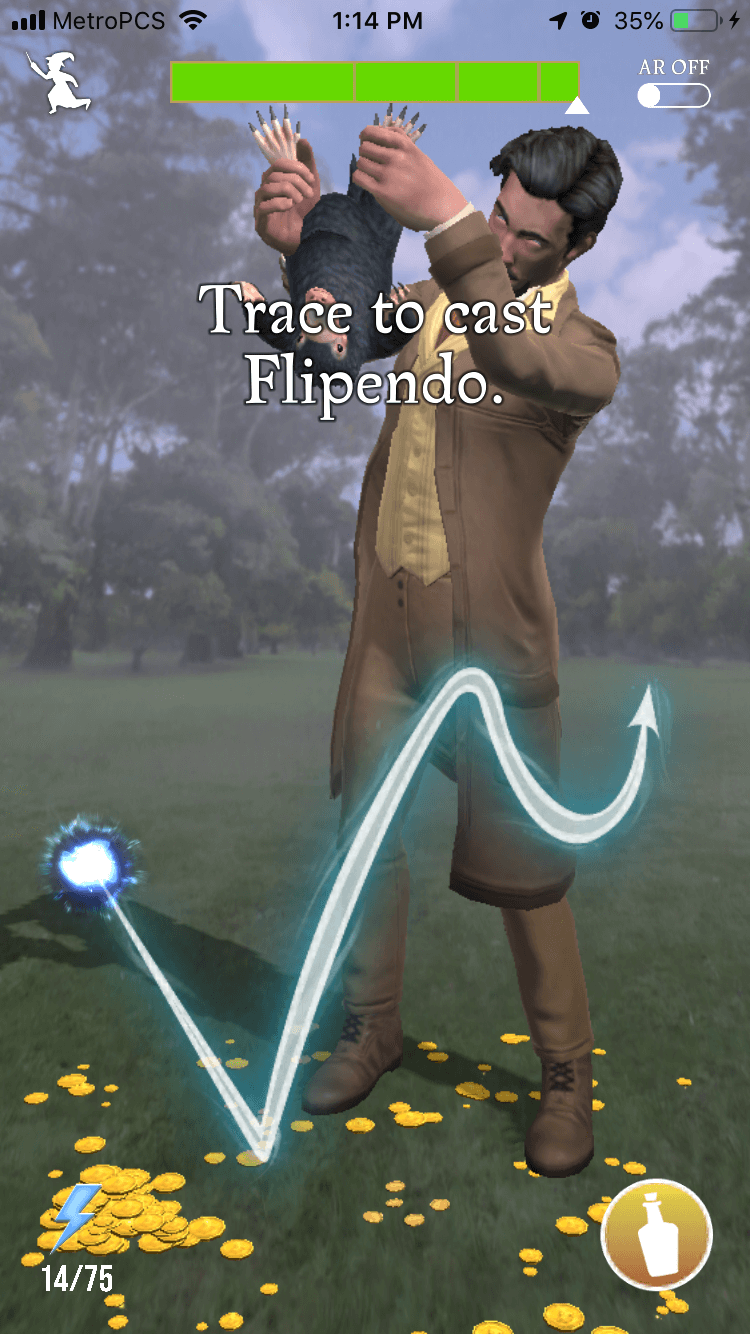 Once you do retrieve one, its image gets added to your Registry like a sticker in a sticker book. However, some of the Foundables you'll locate are just fragments, requiring you to find them multiple times before they're properly retrieved and their images can be added. This means you'll be doing a lot of running around to fill all of your pages. 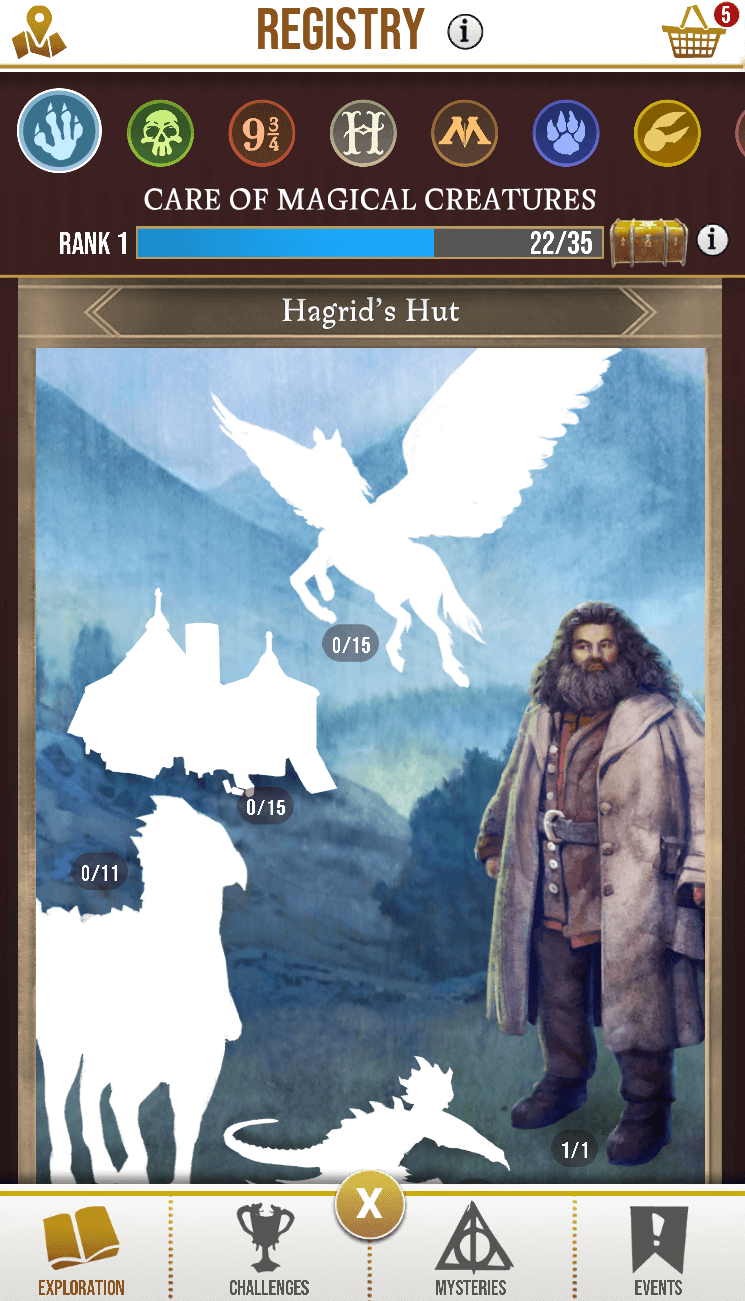 Sometimes, you might even encounter a foe who fights back. When this happens, you'll want to perform offensive spells as well as simple defensive ones to prevent yourself from getting hurt. Both you and your digital opponent have stamina, which essentially works as HP, and if yours gets to zero, you're out. While I haven't yet stumbled upon any enemies that wasn't total pushovers, I imagine these fights will get much tougher later on in the game.

In Pokémon Go, you can create an avatar that looks like a general approximation of you and dress them up in little outfits. The avatar in Wizards Unite is just a generic robed figure. While it defaults a purple character, once you've picked your Hogwarts house, the robe will change to match your house colors. 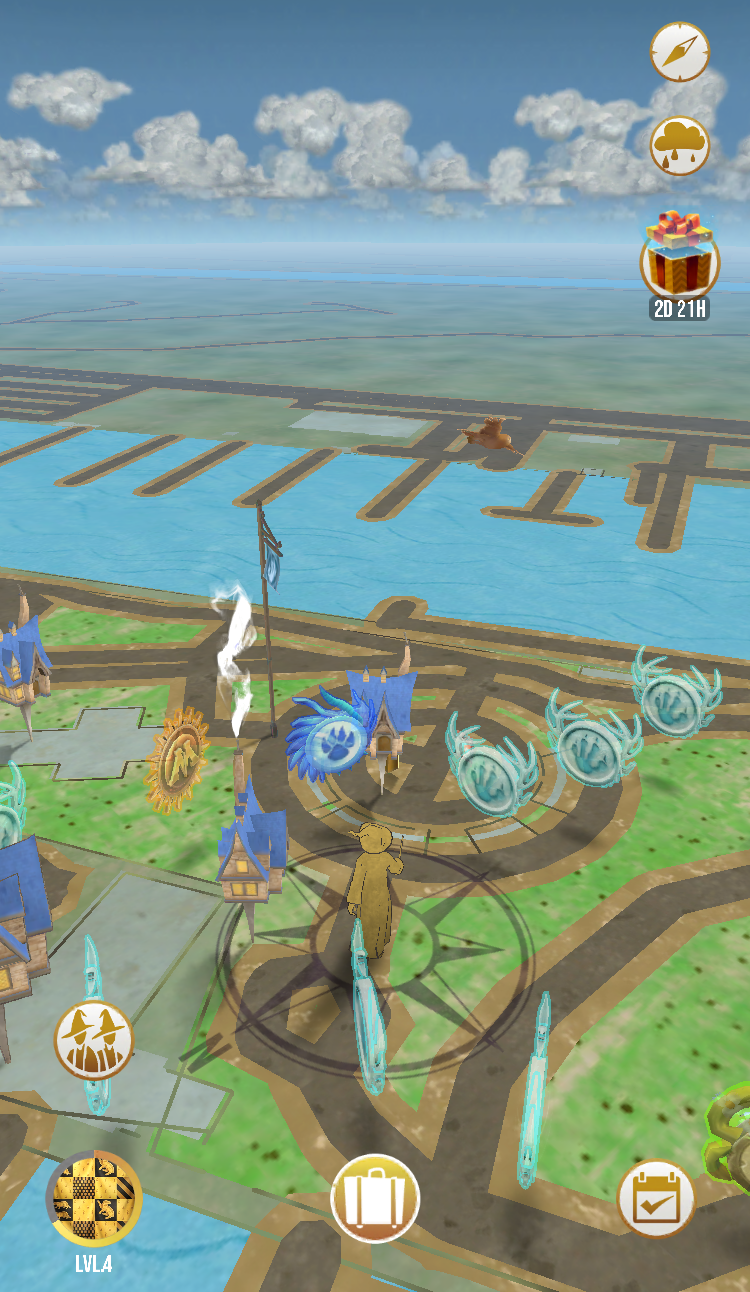 However, you can take a profile photo of yourself with the app and apply all kinds of AR filters to give yourself a house scarf, or a witch's hat, or even a beard. I'm not a selfie person, but I can imagine that others would go wild with this feature and have a ton of fun. There are also frames and color filters you can use to customize your profile photo.

Once you get to a certain level, you can also choose a profession for your character. I'm a magizoologist, focusing on caring for and training magical creatures from the wizarding world. In this section of the game, I can use scrolls to unlock different abilities for my character, similar to a skill tree in other games.

So far, a lot of the other customization options appear to be entirely cosmetic. You can design your own wand and pick its wood, core, flexibility and length. Down the line, I'd love to see for these choices to influence the game in some way. Better yet, I'd love to see some House Cup-style competitions between the houses, akin to the Team Mystic, Valor and Instinct rivalries in Pokémon Go. It would be wonderful to help Hufflepuff win something, for once. 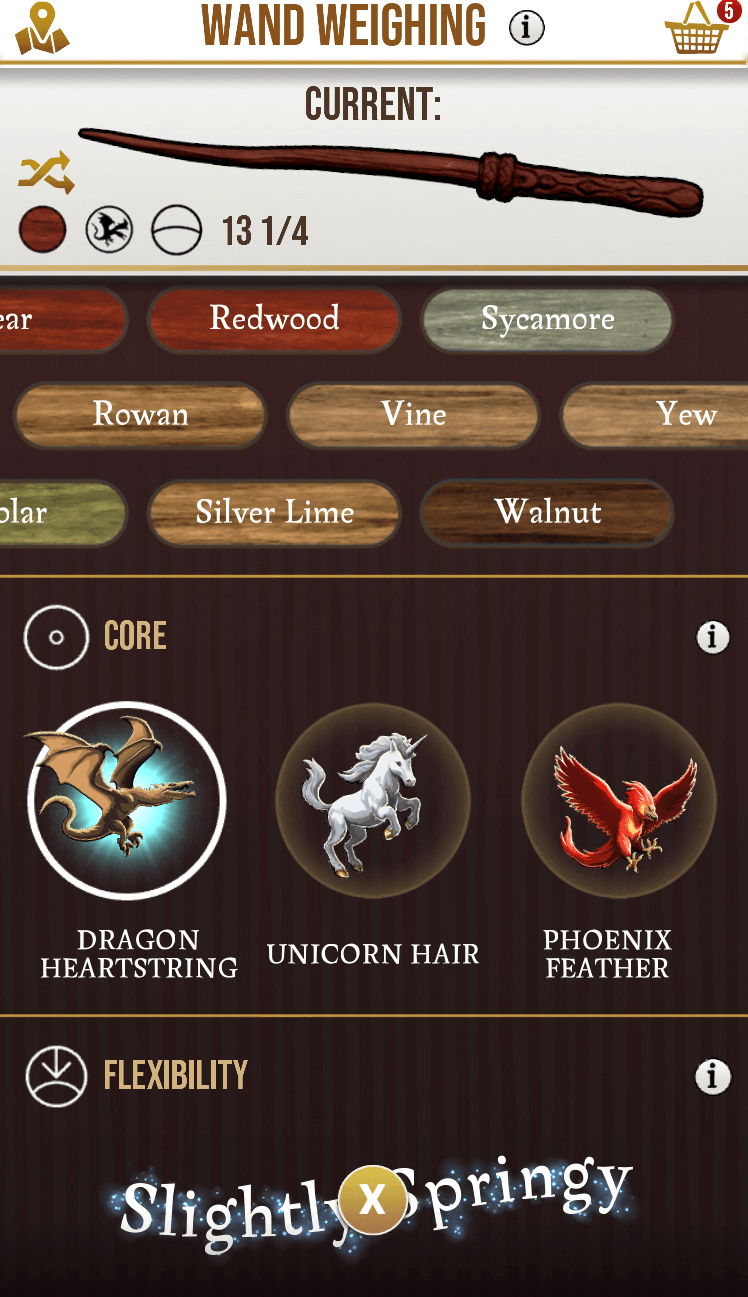 Wizards Unite works with the infrastructure created in Pokémon Go, so if you know the locations of Poké Stops and Gyms, you know exactly where the new buildings in Wizards Unite will be. There are Inns where you can "eat food" to replenish your limited energy, Greenhouses where you can pick a plant to gather potion materials, and Fortresses where you take on Wizarding Challenges. These challenges require Runestones and have the player face off against AI dark wizards. Unfortunately, I didn't get to see what would happen when I won the challenge, because I ran out of energy in the middle of a fight and didn't want to spend my valuable coins to replenish them. 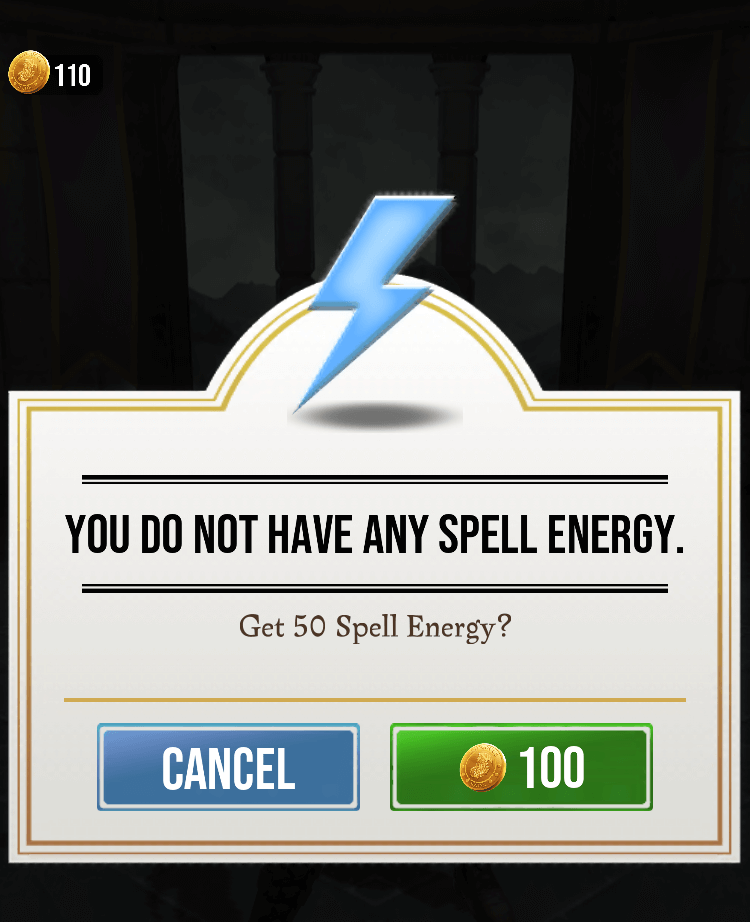 Of course, also Wizards Unite needed an in-game shop to make money. In the game, your transactions take place in Diagon Alley, where you can either spend real money on helpful in-game items, or use coins you earn to buy stuff. So far, I've spent 150 coins on expanding my energy meter.

The game also allows you to brew potions with ingredients you collect. Each one takes a certain amount of time to brew, but you can speed it along if you're willing to spend your coins. The potions you create can then be used to enhance your magical abilities or to get better rewards as you seek Foundables. 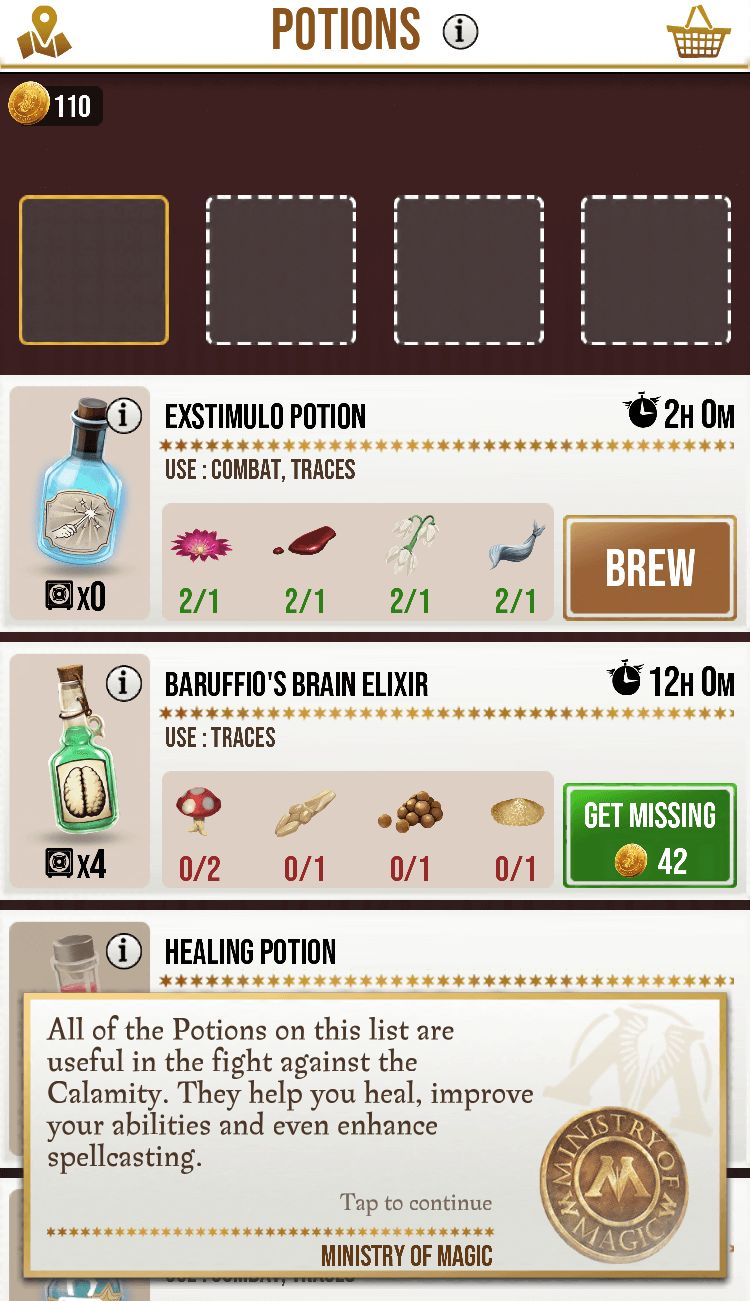 And the game's Portkeys work a lot like Eggs in Pokémon Go. To start a Portkey, you need to open it with a key (which works like an incubator), and once it's opened you need to walk a certain distance with the app open to activate it. Unfortunately, Wizards Unite doesn't yet have an Adventure Sync-style feature that counts steps even when you don't have the app open, so you'll have to be playing it pretty consistently to open your Portkeys. However, once it does unlock, you can use it to transport to a virtual area within the game where you can unlock Foundables that can't be located in the wild. 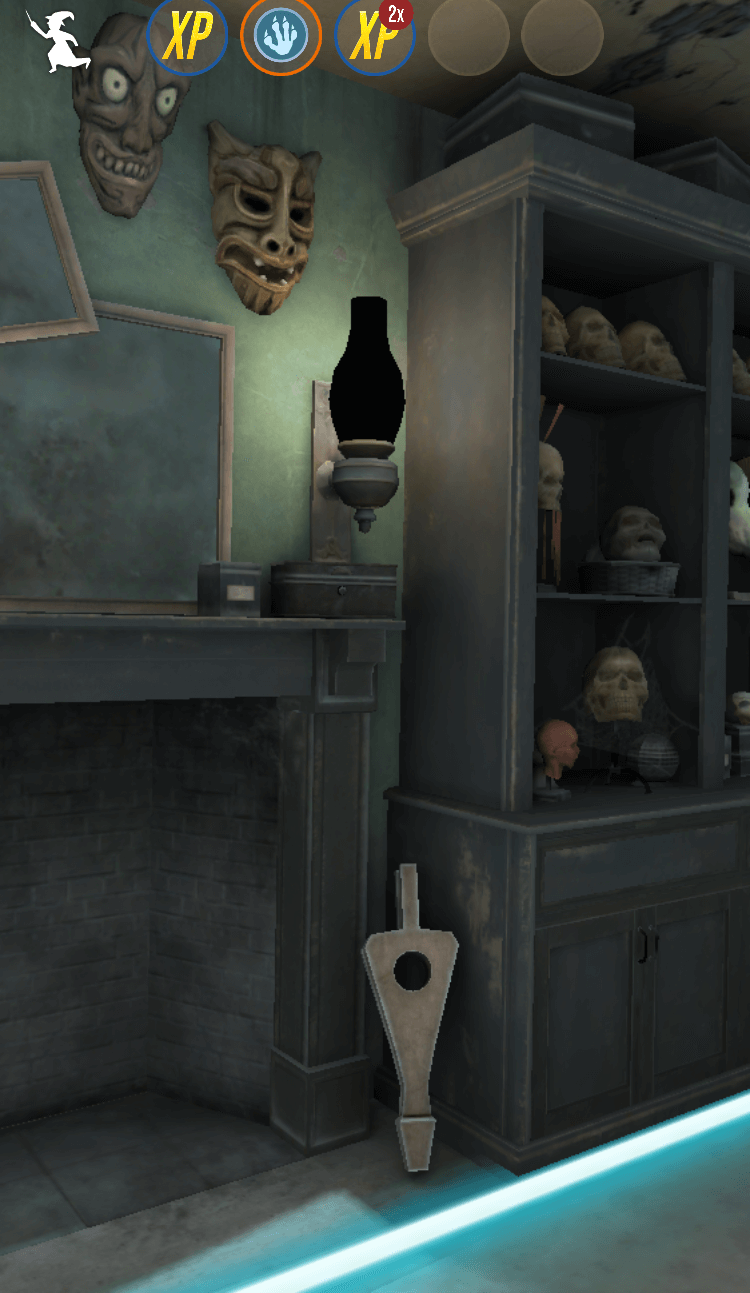 You also have daily tasks from the Ministry of Magic, as well as Statue of Secrecy-specific tasks that grant experience points to help you level up. Doing these tasks is one of the best ways to get more in-game stuff, so it's wise to pay attention and try to maximize the rewards.

When Pokémon Go first released in 2016, lots of people couldn't even log in because the servers were so overloaded with eager fans. While Wizards Unite doesn't appear to have this same issue, the first day has been pretty slow and buggy at times. Maybe my connection is bad, but clicking on simple collectibles sometimes freezes the game for five seconds or more as it registers my actions. Other times, I got stuck on certain screens because I had to progress through dialogue before I could take action, but it simply wasn't appearing.

Altogether, I played it for about 90 minutes, and at least half a dozen times I just shut the app off and reopened it because I wasn't sure if it was ever going to load. There were other times where the next screen did finally load, but it was only after more than two minutes of waiting. While I do think that these issues will get nailed down eventually, if you're going to be an early adopter, you may want to get used to looking at this loading screen. 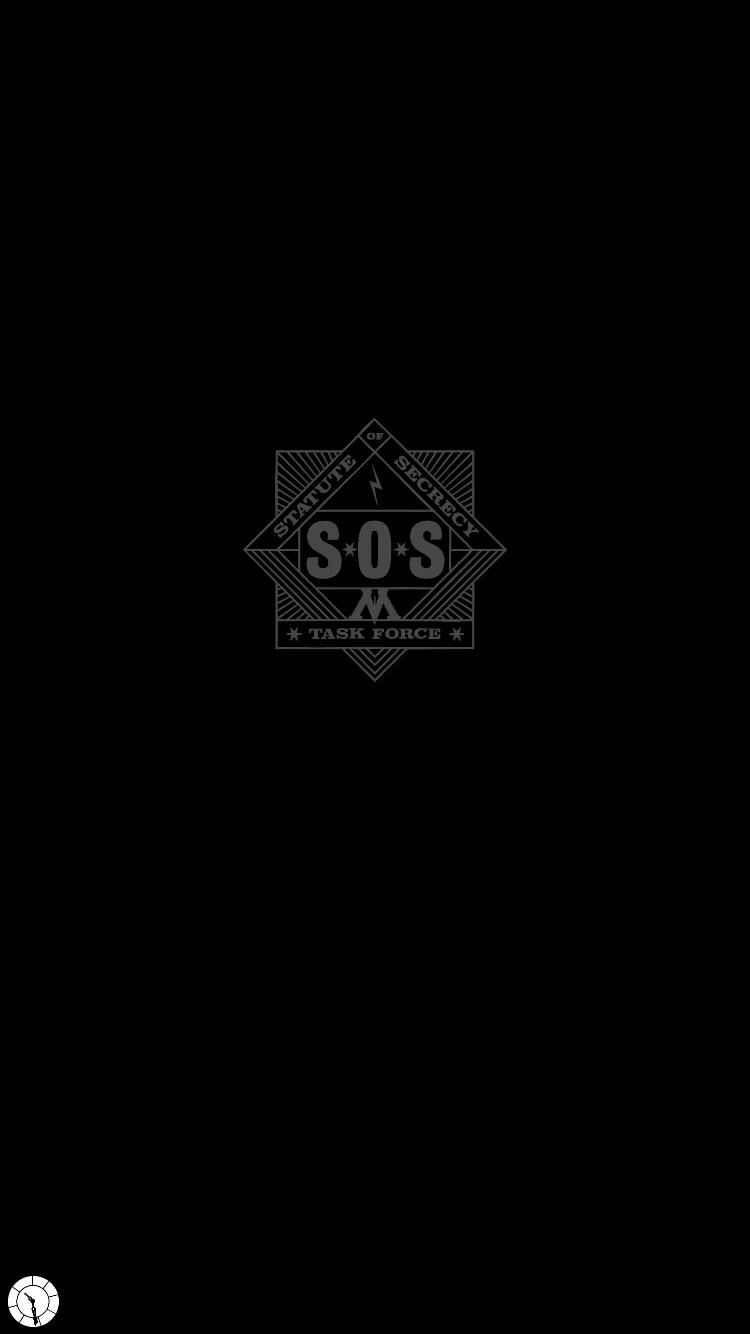 So far, Wizards United is an awesome step into the wizarding world for Harry Potter fans, but it has a much slower pace than Pokémon Go and probably won't enthrall those who aren't in love with the series. The more manual process of collecting Foundables, which requires accurate tracing, makes it more stop-and-go than Pokémon Go, which as the name implies is super easy to play when you're quickly moving from one place to the next. Things can take a while to load, Foundables animations are elaborate and lengthy, and every level up takes time. 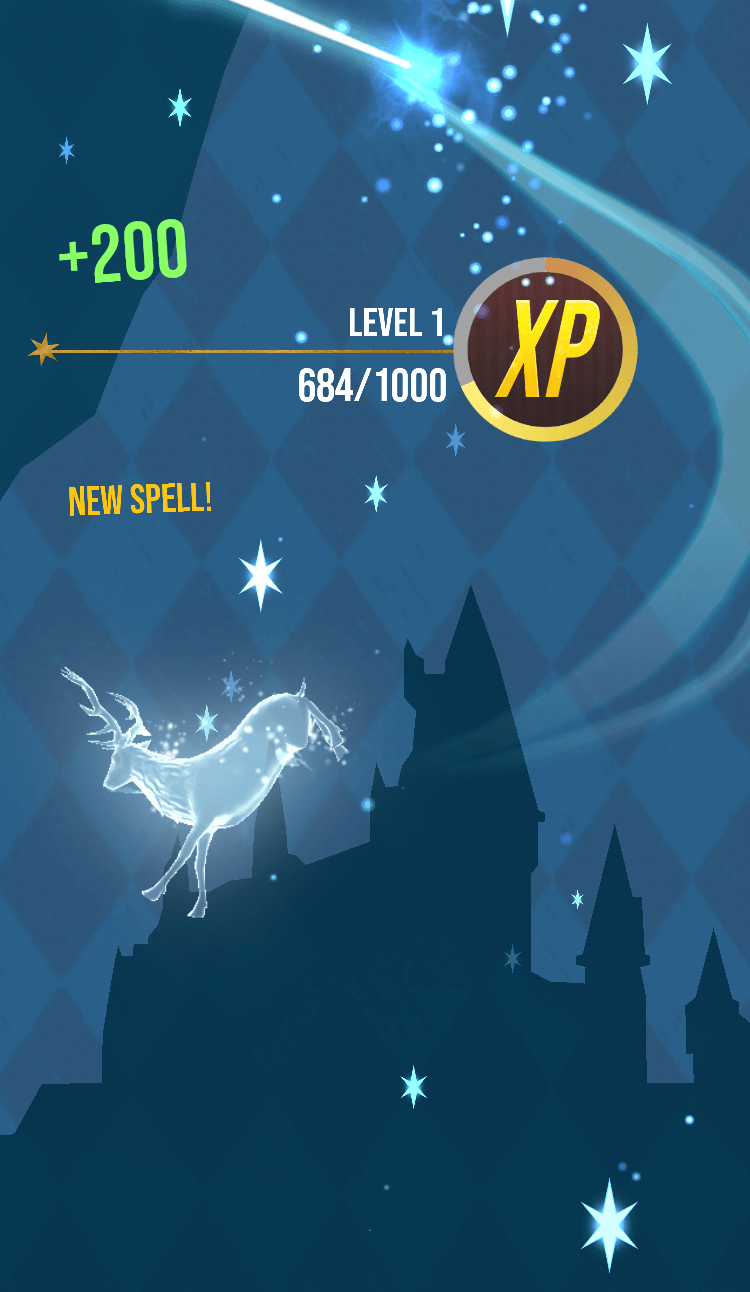 The items (and people and ideas) in the Registry can also feel a bit arbitrary at times, and so far I haven't found filling to be as satisfying or fun as capturing new Pokémon in Pokémon Go. If you adore the series, you might feel differently, but I fully intend to return to Pokémon Go tomorrow when I head out on my daily walk.

In for a throwback? Click HERE to read what happened during my first week of Pokémon Go.