There are certain games you hesitate to buy because you know that you'll be so obsessed that the game will temporarily consume your life. For me, the games in the Harvest Moon franchise have belonged in that category for more than a decade.

There's something about the series' cute graphics and the calming effects of a routine of cultivating crops, taking care of animals and collecting resources that always worked for me. It's the same reason I couldn't put down Nintendo's Animal Crossing.

And now, to celebrate the 20 year anniversary of Harvest Moon, its company Natsume Inc will be releasing a brand new game called Harvest Moon: Light of Hope. I played a brief demo at E3 and I'm delighted—and a little worried—that it might be the most playable version yet. 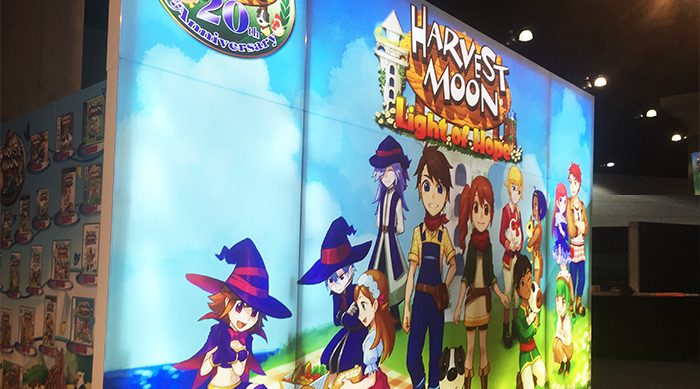 The game begins when your character goes out on an oceanic journey to start their life anew, only to be shipwrecked by a powerful storm. You find safe harbor in a small oceanside town far from home, but it's also been devastated by the monsoon.

As you forge your new life in this land, you'll need to befriend the local inhabitants, start a farm to renew the land and bring the place back to its former glory. You also take on the project of rebuilding the village's abandoned lighthouse. While this beacon was once the town's light of hope, it seems it might be your turn to take on that mantle.

I didn't get to play for too long (about three in-game days, which vary in length depending on your actions), but during that time I got a great feel for the game. I spent most of my time clearing out my farmyard, which was brimming with rocks, knee-high grasses and trees. In doing so, I began stockpiling important materials like wood and stone, which are critical for rebuilding the town.

Once my land was cleared, I was free to start working on my fields of crops. To do so you must plow the land, plant the seed and water and fertilize each one.

Planting seeds has always been a huge part of the Harvest Moon games, and this game brings back the mutations seen in past iterations. Each different type of plant seeds provides information on the best seasons to plant, as well as hints on getting your plants to mutate into special varieties. During my demo, it was a delight to see a strawberry had mutated into a white strawberry or that a giant squash had become a jack-o-lantern-faced pumpkin.

You also have a health meter as well as a stamina meter. Difficult actions like breaking rocks into usable stones or chopping down trees affect your stamina, and health is affected when you stay up too late. Your actions are controlled within a grid system, which I honestly didn't master completely during my time with the game. It's intuitive but not totally reliable, in my experience. Of course, this is far from the final build of the game, so there's time for it to improve before it releases.

I wish I'd spent more time chatting with the in-game characters during my demo, being the social aspects of Harvest Moon are some of the most interesting. Each character has their own personal likes and dislikes, and you can curry favor with them by giving them items they like. In the Harvest Moon game that I played endlessly as a kid, it was very easy to befriend a pink-haired girl named Popuri because she loved being gifted common garden weeds.

Marriage and family building is always an element in Harvest Moon titles, and while I played as a boy named Mike in the demo, I'm excited about the opportunity to also play as a girl and woo the game's eligible bachelors.

And while I didn't get to tend to any pets or livestock in my brief demo, I'm really looking forward to that element of the game as well. In addition to being super cute, animals provide useful items like eggs, milk and wool. I'm told that this game also has special animals, like a brown cow that gives chocolate milk.

As in past Harvest Moon titles, the game works around a yearly calendar, with each month having its own special festivals and events to take part in. I haven't experienced this yet myself, but it's another feature to look forward to.

No release date is set for Light of Hope just yet, but I do know it will be available on PC via Steam, as well as on the PlayStation 4 on the Nintendo Switch. I personally played on the Switch, which felt very natural. It's a game that lends itself well to being played at home as well as on the go. While the version I played was far from the final iteration, I believe it's definitely worth a look.

Love games like Harvest Moon? Click HERE to find out what we thought of Ooblets at E3.