Hatsune Miku is one of Japan's biggest pop stars—and she doesn't even really exist.

Miku is a "Vocaloid," or singing voice synthesizer, with the appearance of a 16-year-old girl. She's managed to sell out stadiums with the ticket-buyers knowing they're there to see a hologram dance and sing with a synthesized voice.

Even if you haven't heard of her, she's a sensation. Of course she has her own series of rhythm games. The latest, called Hatsune Miku: Project Diva Future Tone, brings her Japanese arcade games to the Playstation 4 in an extravaganza featuring more than 200 of Miku's songs and their music videos—if you spring for the full game. 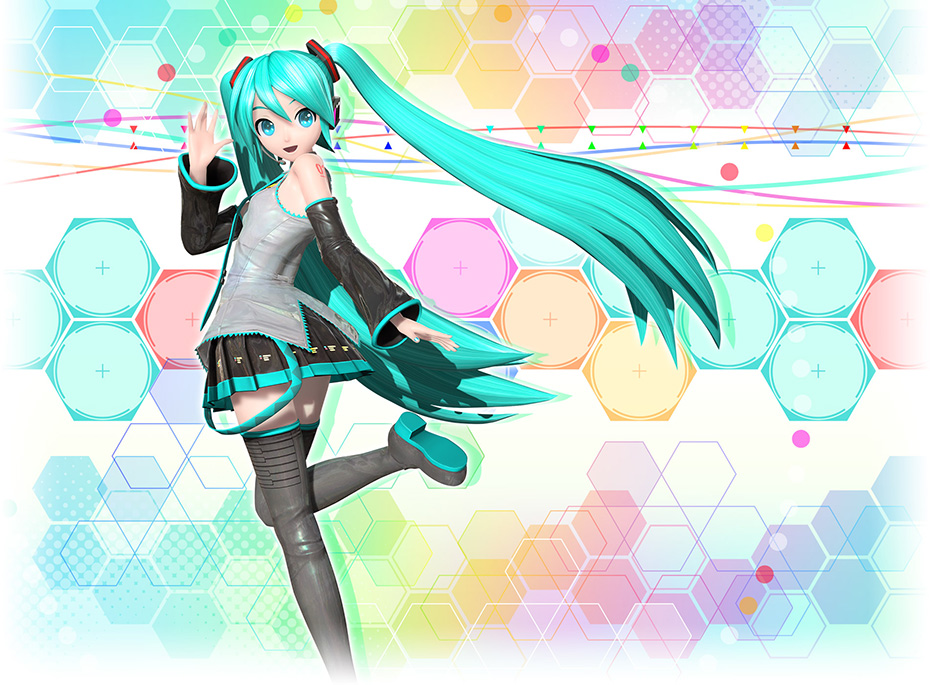 The nice thing about Project Diva Future Tone is it allows you to dip a toe to see if it's really for you. If you have a PlayStation 4 you can download a free demo called Prelude which comes preloaded with two songs. More songs are unlocked with add-on song packs called Future Sound and Colorful Tone, which contain 127 and 95 songs, respectively. They cost $29.99 each, or you can buy the whole bundle for $53.99.

So how does one play a game about a singing synthetic human? It's a rhythm game, a bit like Guitar Hero, but instead of pushing frets and strumming, you must push the correct buttons in time to Hatsune's singing. While that may sound simple, it's anything but.

Unlike Guitar Hero games, there isn't really a structure or order to this game. You can get right into the most difficult songs if you're ready. This can be kind of overwhelming at first, but I recommend starting with the easiest mode and randomizing the songs to start. Not only is the random song selection music super charming, but this will help you dive right in. Over time, you might want to think about the game as a karaoke machine rather than a video game with an order.

In addition to simply pushing the right button at the right time, like the PlayStation's square, circle, triangle and X buttons, or the directional buttons on the D-pad, you also have to time the use of the left and right joysticks in the proper direction for set amounts of time, and sometimes multiple key presses must be combined at once. When you mess up, Miku's voice drops out, reminding you that you need to step it up.

To add to that, the control prompts don't just scroll from left to right or from the bottom to the top of the screen. Instead, the screen can get incredibly hectic, with colorful music video animations bursting in the background while you attempt to follow the prompts as they fly across the screen. There are also English translations for the songs in the corner, but given that the game keeps you busy trying to keep up with everything, you don't often get a chance to read them.

For instance, my personal favorite track from the game (so far) is called "Pink Moon." The animation is super cute and I find it totally distracting, and I'm having trouble beating it even on the normal difficulty mode.

If you love customization, there's also a ton of that in this game. Points you accumulate by performing well can be spent on outfits and accessories for Miku and her friends, and you can then see the styles you create for your characters in the music videos.

If you're particularly obsessed with Hatsune Miku, you can also download a season pass for $24.99 that will give you access to three sets of new songs and accessories. The first one is out now, and two more are coming soon. Otherwise, you can buy them individually for $9.99 each as they release.

Of course, Hatsune Miku: Project Diva Future Tone isn't for everyone. First off, you probably won't enjoy the game very much if J-Pop isn't your cup of tea. After all, that's the core of the game! It's also pretty difficult, but like any rhythm game, it just takes practice and patience to improve. If you're already a fan of Miku, you'll want to hear every one of these songs and watch all of these videos, and we bet you'll stick through it all the way.

If you love weird and original games, click HERE to find out what happened when I got my hands on a Nintendo Switch.