Haven Park Is a Simple Game About Camping, Making People Happy and Discovering Your Destiny

I have to admit that when it comes to deciding which video games are worth my time and which ones I'll be skipping on, the way the game looks is a huge deciding factor.

That was especially true with the new game Haven Park, which was released earlier this month. The trailer showed an adorable yellow bird traversing a lush park full of scenic cliffs and beautiful forested areas against a pink dawn, and its cheery camp aesthetic (an adorable sound design) immediately drew me in.

When I was offered a review key for the game on the Nintendo Switch, I jumped at the opportunity, not quite even knowing what the game was about—just that I wanted to play it. And after completing my little journey in Haven Park, I can say that I'm really glad I did.

In Haven Park, you take control of a little yellow birdy named Flint. His grandma owns the titular Haven Park, where Flint used to spend the summers of his youth, and now that she's getting older, it's Flint's time to take over the park. It's slightly fallen into disrepair over the years, and even though he can be hesitant at times, he takes on the mission to bring the park back to its former glory.

At the start of the game, you're tasked with finding each of the park's campsites. While that mission may seem small, at first, the journey unfolds to become something much bigger. For one thing, the park is enormous, with all kinds of areas to explore from the sandy beaches to golden wheat fields, snowy mountains and everything in between. It'll feel like you've explored everything until you realize you've only unlocked two-thirds of your map. It's idyllic from start to finish and the world is a pleasure to explore as you stumble upon old castles, crashed planes and other unique secrets—and it's made even better by the sweet tapping sound of Flint's feet as he runs.

When you start Flint's journey, Haven Park has definitely seen better days. Fences, lamps and more are broken, and the camps you discover along the way are completely bare. It's a good thing that Flint has the power to change all of that.

You start by scrounging for materials for repairs and construction. As you navigate the lands, you'll stumble upon four main resources (woods, metal, fabric and mushrooms) as well as coins for spending, all of which are invaluable in the game. However, you can't just hoard as many goodies as you like. Your inventory is limited, so you'll want to start using those things ASAP.

While you can use these resources to fix worn-down utilities, mostly, you'll use them for crafting at campsites. You'll be alerted each time you stumble upon one of the game's campsites, and a stone of circles and an axe embedded in a stump will show you where you can start building. You won't just want to discover each area, but to fully upgrade it to make it the hot campsite. 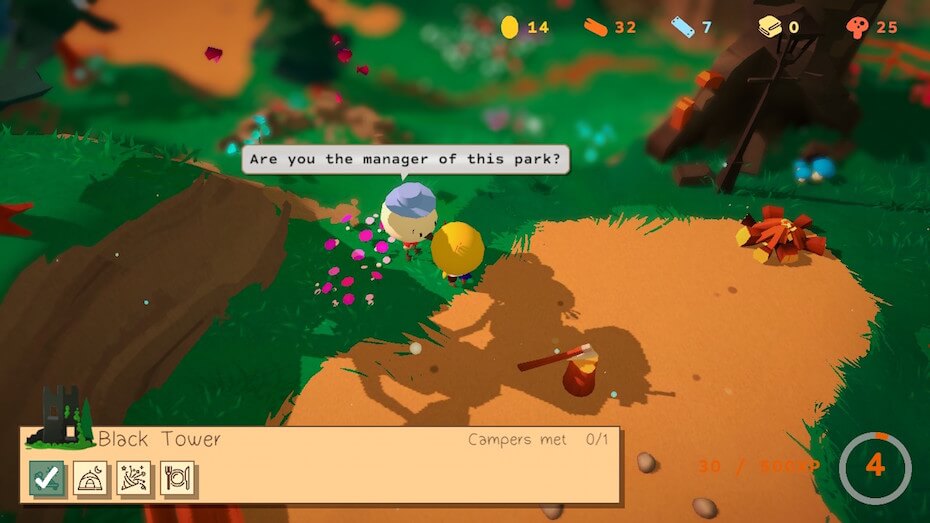 And there are loads of items you can build, which are all designed to fulfill the needs of future campers. Building a rest item, like a bonfire, will attract your first adorable camper, and after meeting them, the game will show you what else they want you to craft to make it the ultimate camp, from more test areas to tents and huts for sleeping, recreational activities, dining areas and decorations. Some camps can even have up to three campers come to stay, so keep your eye out for what they're looking for. They might even offer you special missions you can't find anywhere else in the game.

Of course, you can only build things if you have all of the resources you need—and they can run out fast. At one point, I started ignoring wood resources because I had so many of them, only to start running out as soon as I built them. But rest assured knowing you can't actually run out. The game has a day-night cycle, and these resources do replenish themselves over time.

To gather up the resources you need for camps (and to find them all in the first place) you'll have to be an adventurous spirit who's willing to go out and find everything the game has to offer, which will involve some daring platforming and scaling every inch of the park to see where the game takes you. Not quite sure why there are so many areas you haven't yet unlocked? You'll have to head into the mountains and find the path up in order to progress. Hard-to-reach areas might confound you until you figure the precise secret to getting there. 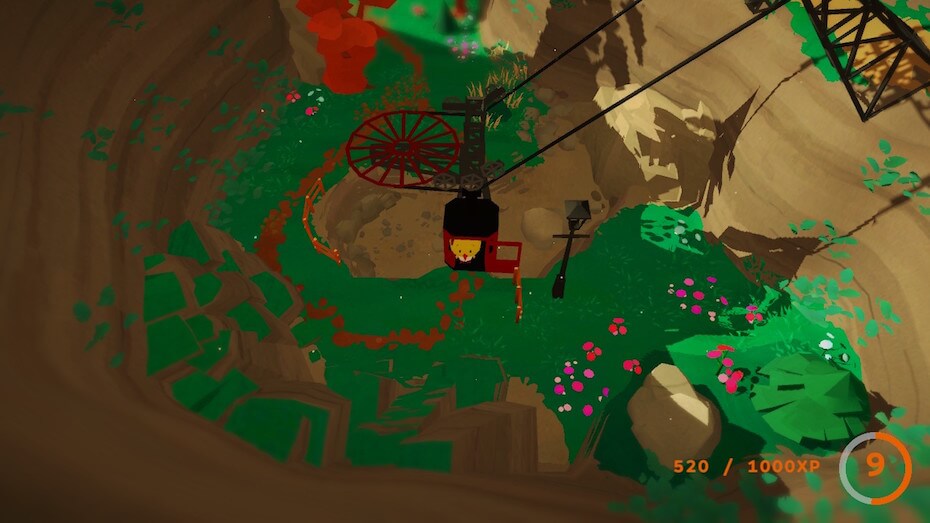 That can be tricky, at first,  but it does help that the game has an experience system. Pretty much everything you do, from gathering resources to fixing things, erecting buildings and completing missions will grant you experience, and leveling up unlocks skill points for super handy upgrades. Maybe you want to increase your inventory, be able to find more resources, or jump higher and move faster. All of these options are possible, and it's up to you to prioritize which skills you want first. 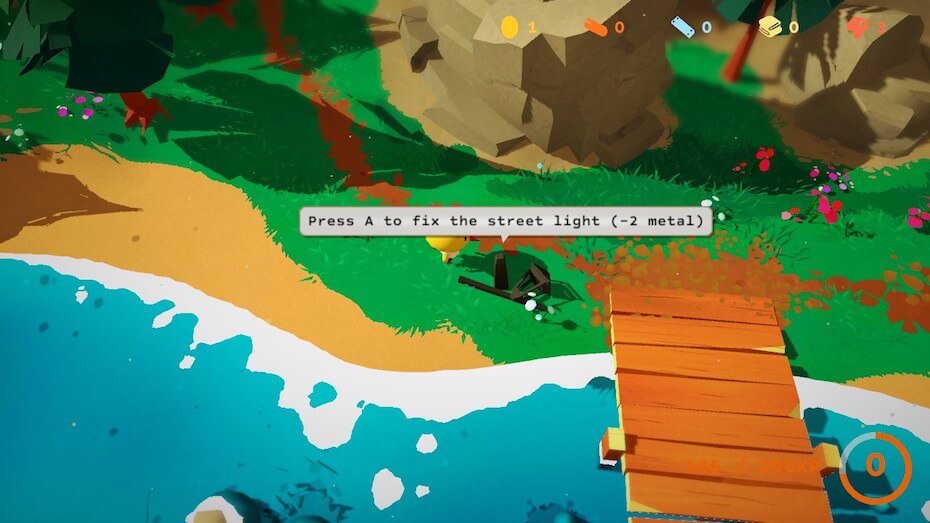 If you're all about building, for example, the Salesmanship skill, which lets you buy and sell resources at any marketplaces you build, is a must. Start by building places where campers can eat to make a little money, and then use that cash to buy and sell your resources and get precisely what you need for any given camp.

Really focusing on what you need, and knowing where to get it, is at the core of Haven Park, and the more you're willing to go out on a limb and adventure into the unknown, there more you'll be rewarded.

Overall, I adored Haven Park for its satisfying gameplay loop of resource-hunting, discovering new sites and building them out to make the park the very best it could be. Even though I'm terrible with directions and finding my way around maps, I never was overwhelmed with navigating the park and nearly always was able to get to where I needed to go once I knew where it was—and it helped that the presentation of the life sim was so cheerful, cozy and cute. I never tired of pressing a button to make Flint go "pew" in his little voice when there were no interactive objects nearby, and the beauty of the world never ceased to keep me going.

If there was one frustrating thing about the game, it's that if you fall off a high mountain, you really fall, and traversing all the way back up via the only route is time-consuming—at least until after the credits roll. But the game has a very sweet climax that really tied the entire journey together in a way that feels important, and I love the game's message that if you just take things one step at a time, everything will be alright. 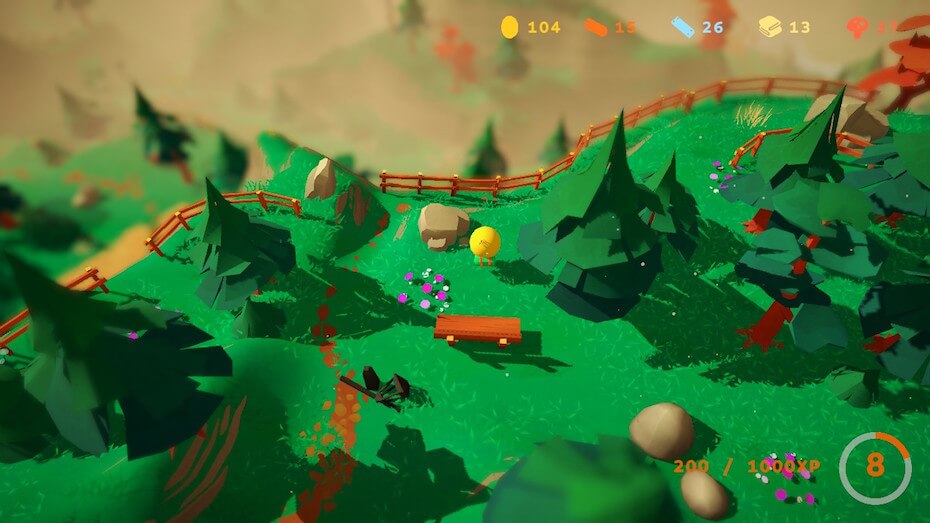 Haven Park is available now on Nintendo Switch and Steam for $8.99.

Looking for more great games to play on the Nintendo Switch? Click HERE to find out why you might love the RPG Cris Tales.