Hevesh5 is a 16-year-old domino artist and aspiring filmmaker whose elaborate domino setups have earned her more than 300,000 subscribers on YouTube. She's also the artist behind Bethany Mota's new lyric video for "Need You Right Now"! 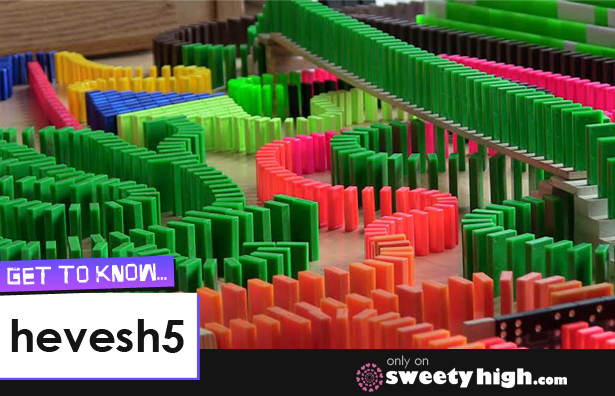 In a recent interview, we spoke with Hevesh5 about her history with dominos, and the chain reaction that set her domino career in motion!

When she was younger, Hevesh5 would set up classic, dotted dominos in a line and watch them fall. In 2009, she did a YouTube search of the word "dominoes" to see what others had done with the game pieces and was blown away.

"I watched a ton of videos and I was just amazed with all of the things you can do with dominoes," she said. "It was so much more than setting up a line and knocking it down. You could actually do pictures and words. It was an art form."

The event inspired her to buy her own dominoes, and she's been at it ever since.

Hevesh5 had always excelled at math as well as art. Setting up domino displays was a natural extension of those talents. Learning some physics also helped her understand the way dominoes would fall, allowing her to put together the perfect setups.

To create these extravagant displays, Hevesh5 uses precision-molded dominoes made from a specialized material. Until recently, they could only be acquired from a German suppler, but they're now available to buy in the U.S.

"Each domino has to be the same weight and the same size," she explained. "Otherwise if you try to build a 3D structure and just one domino is off, the entire thing won't work."

In February of 2009, Hevesh5 started uploading her own creations to YouTube. She never expected the attention that was to come.

Over time, Hevesh5 became the biggest domino artist on YouTube. Big brands like Honda and Campbell's even recruited her to create incredible art for advertising campaigns.

"Those experiences have been really great," she said. "It's always exciting to travel somewhere else and do something for a company that's really big and well known."

Her work has brought her to Montreal, Los Angeles, Toronto and New York City.

It all started when Kevin Jonas contacted her on Twitter, saying he had an opportunity for her. She was shocked, but agreed to speak with Kevin over the phone to discuss the project.

"They wanted to do a lyric video, different from your typical music video," Hevesh5's father and manager, Mark, explained. "They wanted to portray the lyrics in a creative way, and when they decided to do dominoes, they went to the top domino artist on YouTube, and it was Hevesh5."

Kevin Jonas and producer Brian Gonsar went back and forth with Hevesh5 with their ideas for the project.

"We tried to do different domino setups to match the lyrics and symbolism," Hevesh5 explained. "There's a spark, for example, so I did what's called a stick bomb, where popsicle sticks fly everywhere to look like a spark."

Hevesh5 filmed the video herself, at home, and sent in the clips for editing. She was extremely happy with the results, and the video on Bethany Mota's channel already has more than 2 million views!

Even with all of the success, Hevesh5 has remained essentially anonymous. Even Bethany Mota, Kevin Jonas and Brian Gonsar didn't know she was a 16-year-old girl until they started putting the lyric video together with her.

"Most people assume that I'm a guy and I'm an adult," she said.

Hevesh5 has decided to take that as a compliment, since being younger is always more impressive. For now, she intends to remain out of the spotlight.

"Im not really sure why I'm anonymous," she said. "But my art form is more about the dominoes. It's not really about me."

But that doesn't mean that Hevesh5 doesn't plan to reveal more about herself in the future!

To see Hevesh5's amazing work in "Need You Right Now," check it out below, and be sure to subscribe and check out her YouTube channel for more incredible domino videos here! You can also share your own unique talents with us at Sweety High and check out related stories below!