When I reached out to developer Team Cherry to see if I could review Hollow Knight on the Nintendo Switch, I had no idea it'd be one of the best games I've played in years.

The game features an unnamed insect knight in a forgotten kingdom called  Hallownest. Wielding only a nail, he ventures down into the ruins seeking adventure, only to discover that much bigger forces are at play, and that he's the only one equipped to stop them. 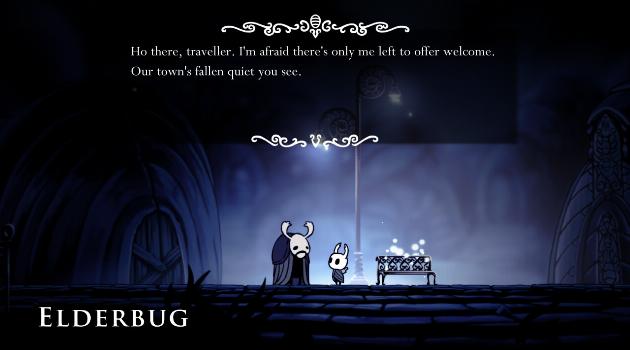 Hollow Knight sets up its core mechanics early on and then builds upon them masterfully. At first, I could only swing my nail as a sword, but soon I learned to utilize a power called Soul. This white, shimmering substance was collected every time I struck an enemy. It could be used in a powerful spell that blasted faraway enemies, or focused into a healing spell for the knight, allowing me to recover health as long as I had the Soul.

This made for a really interesting mechanic. Sometimes I  found myself jumping into potentially perilous situations in order to collect the Soul to recharge my health. When I fought bosses, I had to skillfully balance my need for powerful attacks and for health. Later in the game, the ability to make snap judgments regarding Soul was a matter of life and death (for the knight, at least).

Beyond the use of Soul, Hollow Knight fully leans into the Metroidvania style and perfects it. As soon as I started playing, the game teased me with ledges I couldn't quite reach, walls I couldn't quite scale and chasms I couldn't quite cross. Each time, I knew it was just a matter of time before I'd gain the right ability to overcome those hurdles. When I finally would get one of those useful upgrades, it made it worthwhile to re-explore every inch of the world to see what I might have been missing before, and finally getting what I needed was always super satisfying. 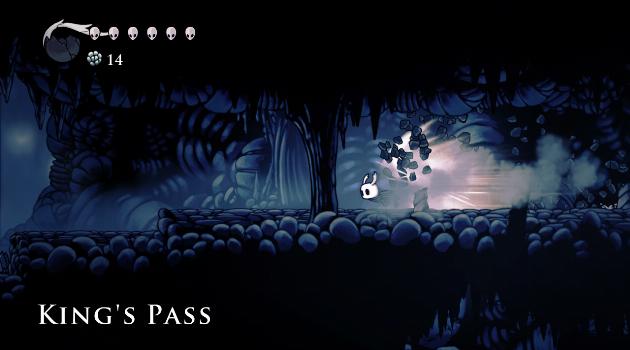 And even when I got stuck because I was looking at a problem in the wrong way (I was totally flummoxed by rooms full of pink, bouncy mushrooms for a while) there was always something else for me to do. When I wasn't able to follow the intended path, I farmed the in-game currency, Geo, until I had saved up enough for a lantern, enabling me to navigate pitch-black areas in the game which I wouldn't have encountered until much later.

The way you play Hollow Knight is also extra customizable thanks to equippable charms, which each grant the player unique abilities. I stuck mostly with some of the first charms found in the game because they were too useful to cut. I have a terrible sense of direction, so the one that allowed me to see where I was on the map was an absolute must. Another made it so that any Geo dropped by enemies would immediately float to the knight. This was also essential because the shops in the game contain a lot of valuable (and expensive) items. That didn't leave me a lot of room to play with the rest, but as I unlocked more slots, I was able to get creative. 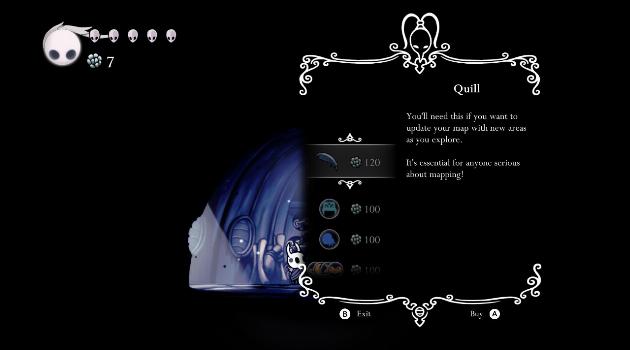 Because you can only swap out charms at benches (which also work as the game's save points), I only found myself changing things around when I had to face a really specific challenge. When it came to bosses, I could equip charms that would give me floating shields or protect me as I healed myself, which saved me more times than I could count in key moments. 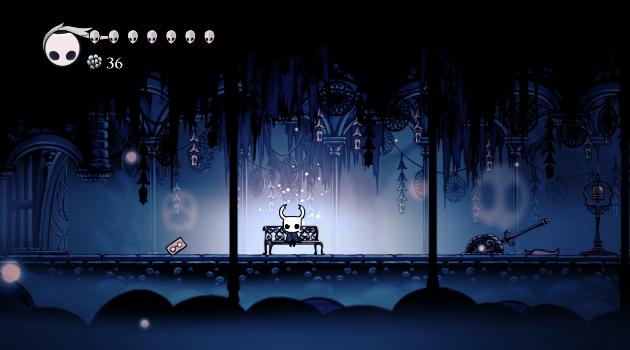 Speaking of bosses, the ones in this game are spectacular. Though they're all based on insects, each felt distinctive and had its own personality that shone through in its design and abilities. There's a proud, gloating dung beetle, and a team of praying mantis warriors with a strong moral code who work together to cut you down. Each boss fight is tough and exhilarating, and I was rewarded handsomely whenever I was able to defeat them.

Of course, I rarely beat them on my first try. Every time I died, the game sent me back to my last save point, and I'd lose all of my Geo. Of course I wanted it back, so I'd have to trek all the way back to where I'd died (sometimes all the way across the map) and defeat a ghostly version of the knight called the Shade to retrieve my hard-earned cash.

Thankfully, navigating across the world of Hallownest was rarely a chore, even when it was a challenge. The areas are atmospheric and spooky, and each one has its own unique setting and an aura that's hard to confuse with any of the others. There's a real coherence in the way the world connects, making that world feel even more real. 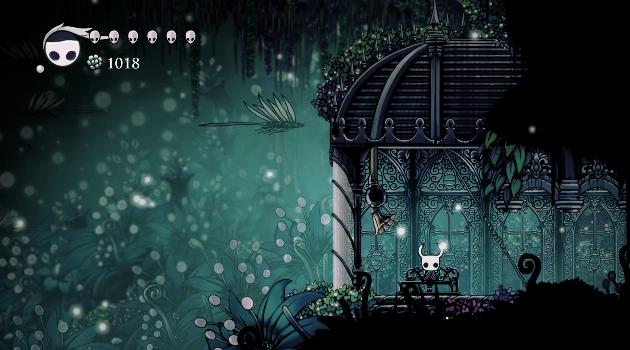 But it's the little details that really made Hollow Knight work for me. Early on, I stumbled into a small town full of empty eggs, with one mustached grub crying alone inside one of them. It quickly became clear to me that he was missing his loved ones, and I was pretty sure it'd be my mission to rescue them. 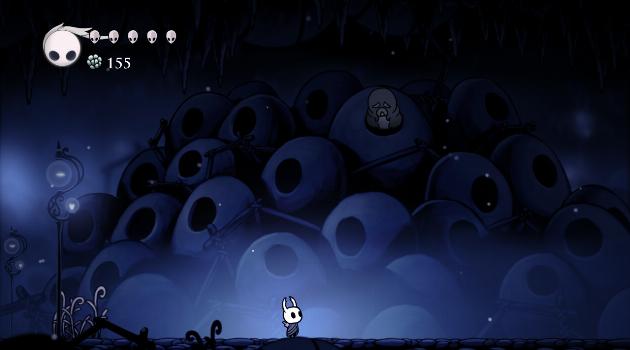 Sure enough, it wasn't long before I heard the sound of a weary, scared creature. I followed the sound to its source, finding a grub in a little glass jar. I couldn't reach it quite yet, but when I came back and rescued it, it returned home, and when I revisited that area, the Grubfather rewarded me for it. 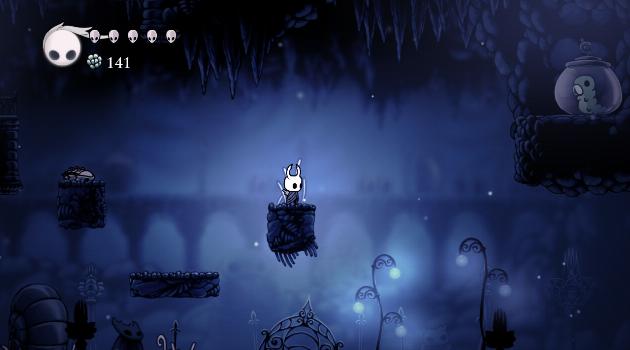 Later on, I heard a soft sobbing while exploring the mushroom-filled Fungal Wastes and tracked the noise to find a sad beetle all alone in the dark. After working out how to get to her (and repeatedly getting hurt by tricky spikes), rescuing the bug, named Bretta. 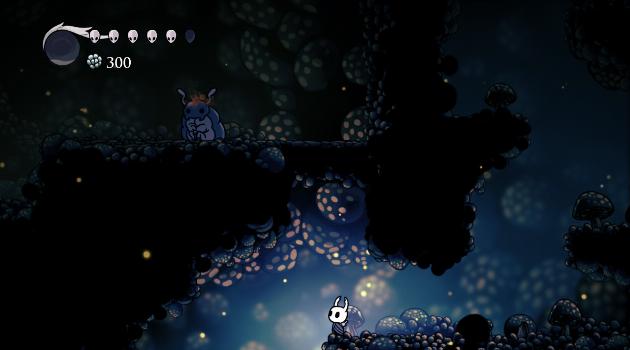 Bretta wound up being one of my favorite characters. After she returned home, I discovered she had a massive crush on my character, decorating her home with illustrations and dolls of the knight, and essentially writing fanfiction about him in her journal. That personal touch made her real to me.

And then there was the sweet mining bug called Myla, who sang a sweet-sounding but haunting song as she picked away at the stones. Later, things take a dark turn for the character—but I don't want to reveal too much about this great game.

I actually played many of the opening hours of the game while waiting in lines at E3, and while it made the wait rush by, I didn't realize until later that I wasn't getting the full Hollow Knight experience because I wasn't hearing the game.

The music and environments throughout Hallownest are immersive and wholly engaging, and I found it way too easy for hours to slip away without my noticing. By the time the credits rolled at the "end" of the game, I was shocked to find out I'd put nearly 25 hours into my Hollow Knight adventure—and I'd found less than two thirds of what the game has to offer. 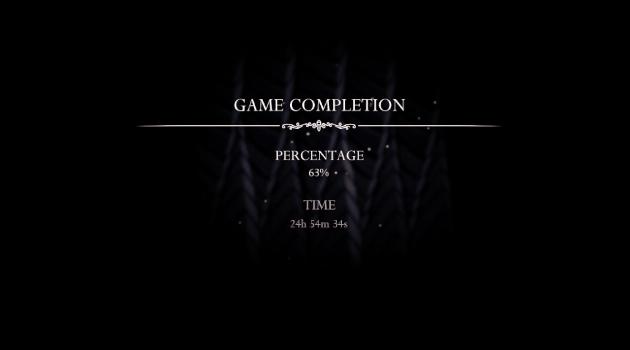 Hollow Knight is way bigger than it looks on the surface. Every time I thought I was getting close to the end game, I was hit with tons of new areas to explore, enemies to defeat and items to collect. I was sure I'd found the final area, but there were still 10 more hours of things to do before I finished the main story.

The lore of Hollow Knight is deep, but the game withholds just enough to keep it compelling. The characters' stories really build the world, instead of feeling like exposition. And the final boss was absolutely the last thing I'd expect, even though everything had logically been building up to it. 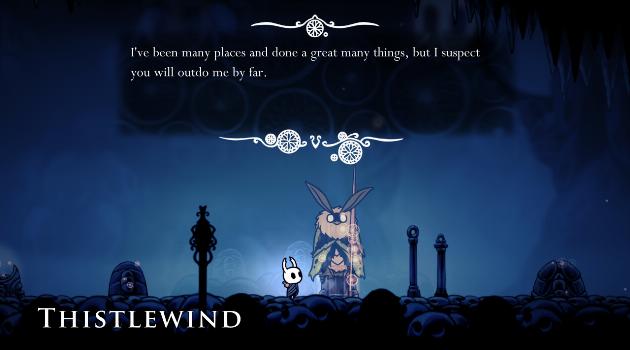 I hear there's a "better" ending out there for completionists, and I won't be fully done playing until I conquer that, too.

Hollow Knight easily earns a spot in my top 20 games of all time. It only costs $15 in the Nintendo eShop, so unless you can't handle a bit of challenge or anything even slightly scary, I wouldn't think twice about getting it.

If you like Hollow Knight, click HERE to read my review of SteamWorld Dig 2 on the Nintendo Switch.