Everything I Learned Playing the Hollow Knight Sequel, Silksong, at E3

Hollow Knight might be my favorite Metroidvania of all time, so when I heard that its upcoming sequel was on display at the Nintendo booths at E3, I immediately made playing it my next priority.

The upcoming game is called Hollow Knight: Silksong and follows Hornet, a mysterious princess hero who was a foe-turned-friend to the main character in the first game. I was delighted with what I encountered, and here are a few things Hollow Knight fans can look forward to this time around:

In the opening cutscene of the demo, Hornet sits helplessly inside a cage being carried on the shoulders of a few bug grunts, kidnapped and hauled away to an unknown kingdom. Visually, it's halfway between Cinderella's pumpkin carriage and a prison cell.

But when a glowing white dragonfly touches the cage, it undoes a magic binding spell, allowing Hornet to unleash her power. She shoots a barrage of thread around her captors, sending them crashing down, until eventually Hornet finds herself waking far below in the verdant Moss Grotto, which appears to be the first area of the game. 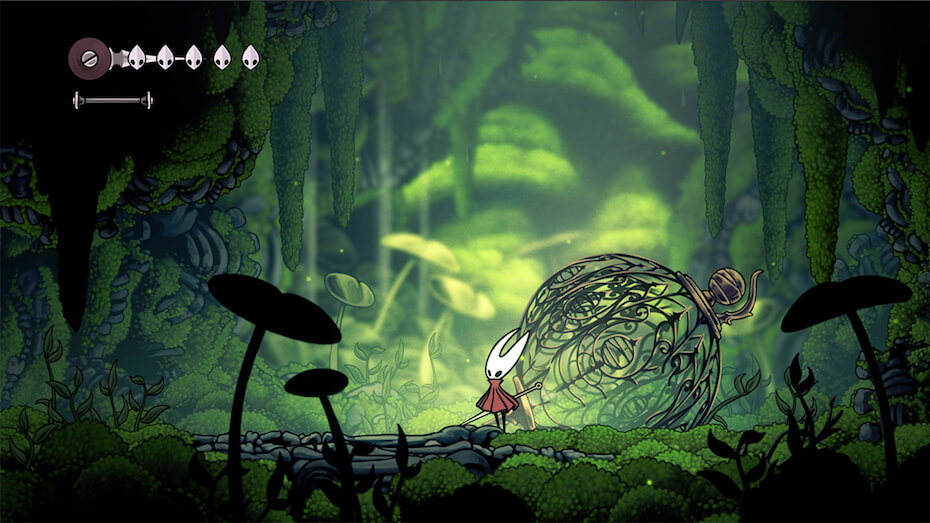 Hornet has always been one of my favorite characters, so it's a thrill to see that she's the protagonist of this new game. With her signature needle weapon and her flowing pink dress, she's a striking heroine with a lot of depth to explore.

During my short time with the game, I grew to really love the way this new hero handles things. She's more agile and acrobatic than the unnamed knight from Hollow Knight, attacking with a long-ranged needle and dashing in diagonally to land second hits. Her moves are flashier, giving the game an entirely new feel. In one of the two levels being demoed, she also has an additional dash move, and even gains a projectile attack that makes her even more formidable.

Since the game's inventory lists Hornet's dress, it's also fully possible that she'll be able to equip different outfits with new abilities later in the game. There are so many new, exciting possibilities in Silksong regarding Hornet and what she might achieve this time around. 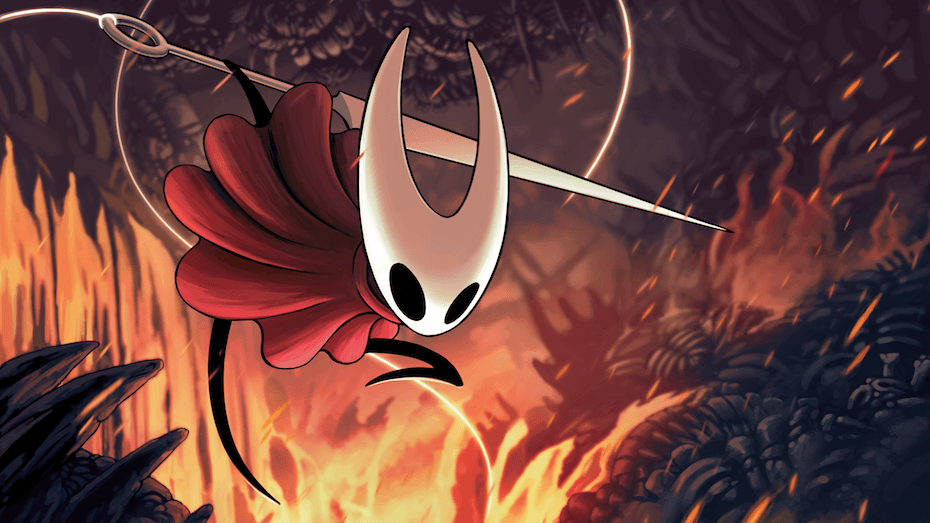 Silksong will feel familiar to Hollow Knight fans, but the differences are what make the game feel like a true sequel. Hornet, herself, is a major change, but so is the way she interacts with the world.

Instead of a soul meter, Hornet powers her abilities by gathering thread. You can refill by attacking enemies or striking silk cords and webs strewn across the world, allowing Hornet to heal her body or to use powers, like a projectile enabled after she collects the Rosary String item. And while the knight collected various coins as currency, Hornet finds beads instead. These are small details, but they show that developers Team Cherry are really focused on the logic of the world and making it feel just right. 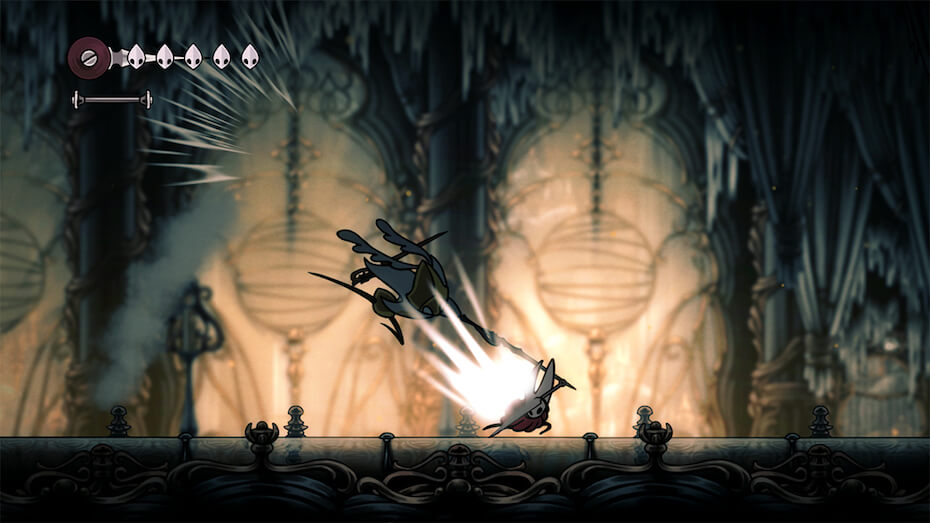 Silksong's world is just as gorgeously designed as the Hallownest from Hollow Knight. It feels connected to that world, yet unfamiliar all at once. The insect-like enemies and characters are distinctly stylized and instantly recognizable as belonging to the franchise, even if they don't look precisely like anything we've seen before.

The Moss Grotto seems like an introductory area to the game, with a simpler structure and enemies that don't pose too much of a threat. It's verdant and filled with beautiful plants and running water. There are little, bushy green bugs with spiked backs, white roly-polies that curl into poky balls and flying grassy insects with wings. One area boss is the mega-sized queen of these enemies called the Moss Mother.

Based on the difficulty of the other demo area, Deep Docks, it likely appears much later in the game. It's more industrial, scattered with dangling chains, streetlights and elevator mechanisms. The manufactured buildings clash against organic-looking structures resembling insect husks, and most of the area is bathed in embers. Deeper into the area, the floors are made of hot coals, and lethal waterfalls of lava pour from the ceiling. Despite the constructed quality of the world, it remains atmospheric and stunning. 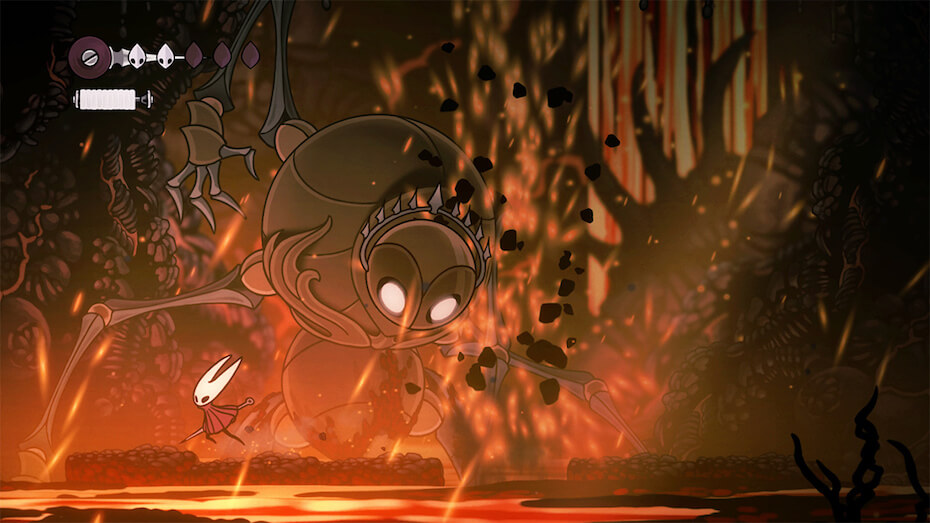 Here, enemies wear what look like welding helmets, toiling away in the mines. You'll also encounter a friendly lumbering tinkerer called the Forge-Daughter and her coal-shoveling inchbug. You might even encounter cryptic clues that may or may not help you progress, and a mysterious boss called Lace who uses a needle of their own to guide sparkling dragonflies like a conductor. The emphasis is clearly on worldbuilding and lore, and I'm eager to learn more about it all.

If you're not sure why Hollow Knight is such a big deal, click HERE to read my full review.