How Does Hooray Foods' Plant-Based Bacon Stack Up to the Real Thing? Here's What We Thought

As a long-time lover of bacon, I'm willing to try pretty much anything related to the salty, savory and meaty treat.

Bacon tastes incredible in everything from sandwiches to delectable breakfast plates to maple-glazed desserts and so much more, but at the same time, I recognize it's not amazing for me, or the environment. I'm not too much of a bacon snob not to enjoy turkey bacon from time to time for both reasons, and have even enjoyed some plant-based bacon on occasion.

I say some, because while I've had many a delicious fake BLT while dining out, I've had a tougher time finding vegan bacon at the grocery store that isn't rubbery and unpleasant—and believe me, I've tried. So when the team behind Hooray Foods reached out to me to try their take on plant-based bacon, I was curious, but didn't want to get my hopes up too much. However, after trying it, I can say they've knocked it out of the park.

Hooray Foods' is a relatively new company, and their first product is their plant-based bacon. It's designed to replicate the scent, appearance, taste and texture of real bacon, and cook just like it, too. Its entire ingredients list is coconut oil, rice flour, tapioca starch, liquid smoke and mushroom-based umami seasoning, and it's also non-GMO and full of gluten, dairy and soy.

Their plant-based bacon also has no cholesterol, and about half of the fat of meat-based bacon, as well as fewer calories. The production of their bacon also produces 80% fewer carbon emissions than real bacon, while saving pigs in the process, and Hooray Foods also partners with non-profit farms and animal sanctuaries to rescue pigs. While they're not currently available to purchase online, they are stocked in Whole Foods stores and more across the country.

The minute I opened my pack of Hooray Foods plant-based bacon to cook, I was greeted by a rich, smoky smell, and couldn't wait to dig in. Of course, I had to cook it first. The strips had an interesting look about them, white stripes of purplish-red, orange and pink set off against off-white. Out of the fridge, they were sturdy, rather than flexible, and had a dusting of solidified coconut oil along them.

I got a pan ready, heating it up until it was nice and hot, before laying out my first five strips. Immediately, they began sizzling and giving off an even more concentrated smell of smoky flavor, which immediately brought to mind a Carl's Jr. Western Bacon Cheeseburger—minus all of the meat and cheese, of course. I only read afterward that the brand recommends cooking two to three strips at a time, but going all-in with five strips gave me no issues. 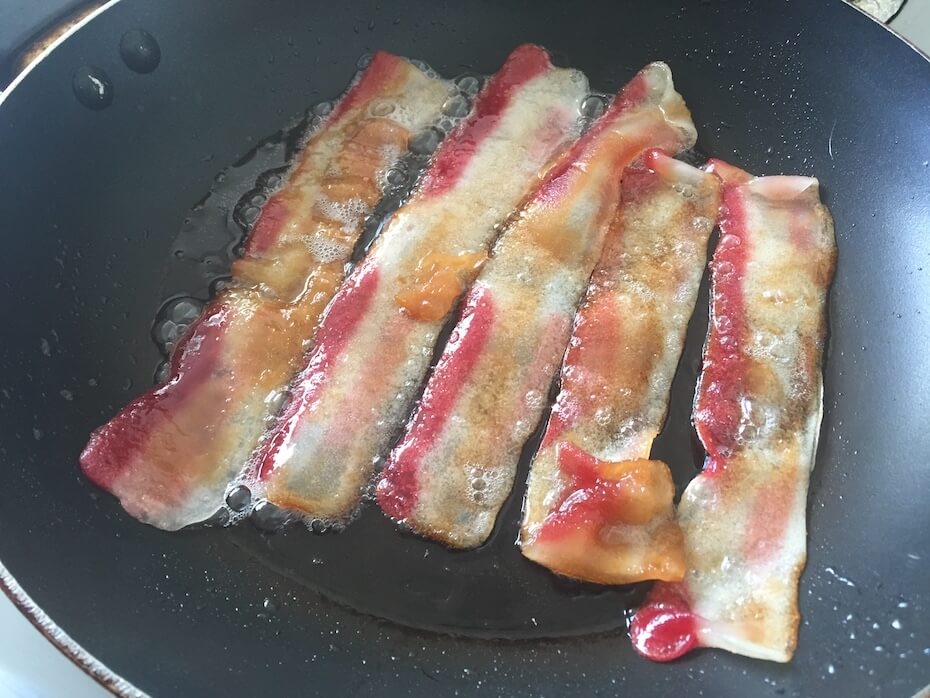 It wasn't long before the coconut oil started seeping out of the plant bacon and pooling around it, accumulating in the pan. I immediately noticed how clean the oil looked, as opposed to the gunky grease that comes out when you cook pork bacon. I wanted to make sure it was getting nice and crisp, so I waited a few minutes before flipping the bacon at all. When I did, I could see that the heat was already getting the job done.

When I did flip, however, I discovered that any time the bacon folded up on itself, it stuck to itself and became very hard to detach. After trying a while, I gave up, flipping the bacon occasionally until the pieces were nice and crisp, and transferring them to a plate lined with a paper towel before throwing the next five slices in.

Just like with normal bacon, the second batch was done much quicker than the first, and at the end of it, I'd cooked the whole pack of 10 strips of bacon in total. In my household, we eat bacon with white rice (maybe weird, but delicious) and I found that these strips were the perfect complement to the soft rice. They had a lovely, meaty, salty flavor that wasn't identical to the flavor of real bacon, but got pretty darn close, and the crisp bite of the strips was closer to the real thing than something like turkey bacon ever gets. Where it had folded in on itself, it was a little chewier and maybe even slightly unpleasant for me to eat texturally, so I recommend making Hooray's bacon as crispy as possible. It also had a coconutty aftertaste thanks to all that coconut oil, which I didn't mind at all. In fact, I really wouldn't mind going back for seconds. 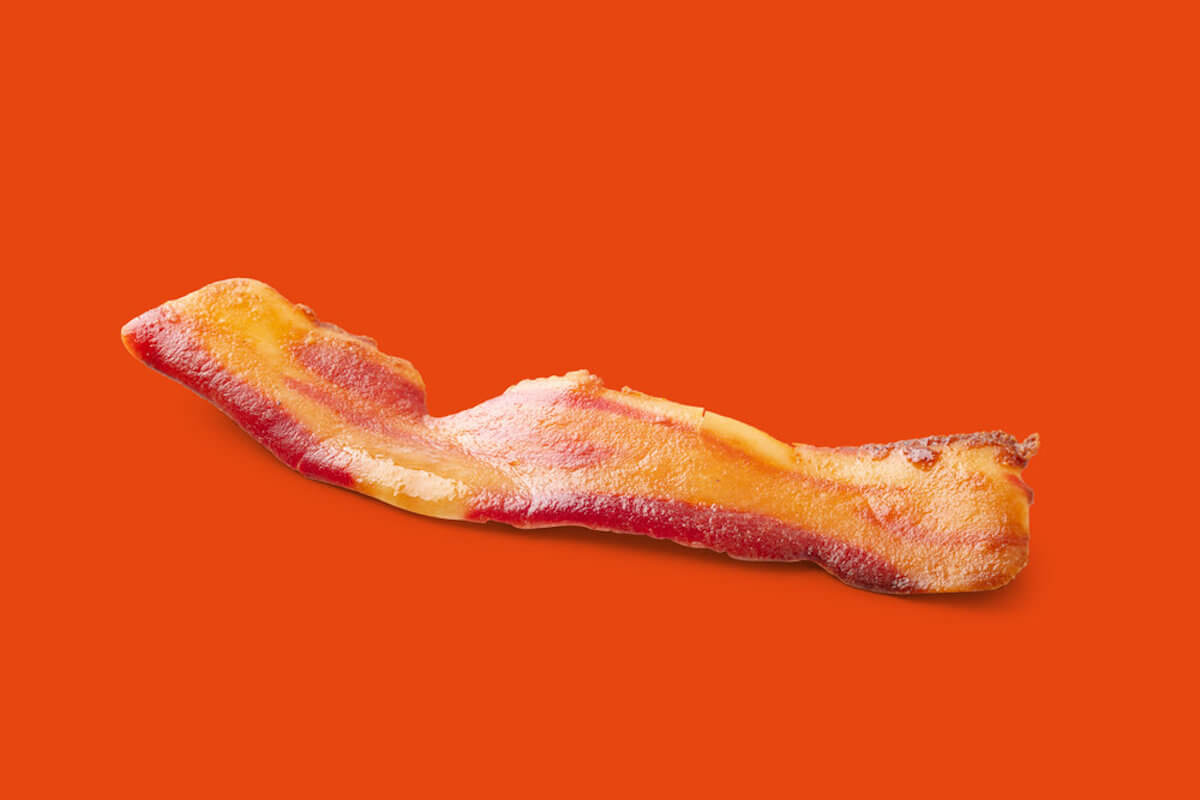 If you're looking for a plant-based alternative to bacon, you must try Hooray Foods' option. It has all the salt, smoke and crisp texture you'd come to expect from the real deal. At 60 calories per strip, it's not exactly a health food, but it is a healthier option than pork bacon. Of course, if you're allergic to coconut, or just can't stand having it anywhere near your food, then it's probably not for you. I also easily ate the whole pack with another person in a single sitting, so it's not a ton of food within the one pack, but it's definitely worth a try to see if you think it's worth the money. 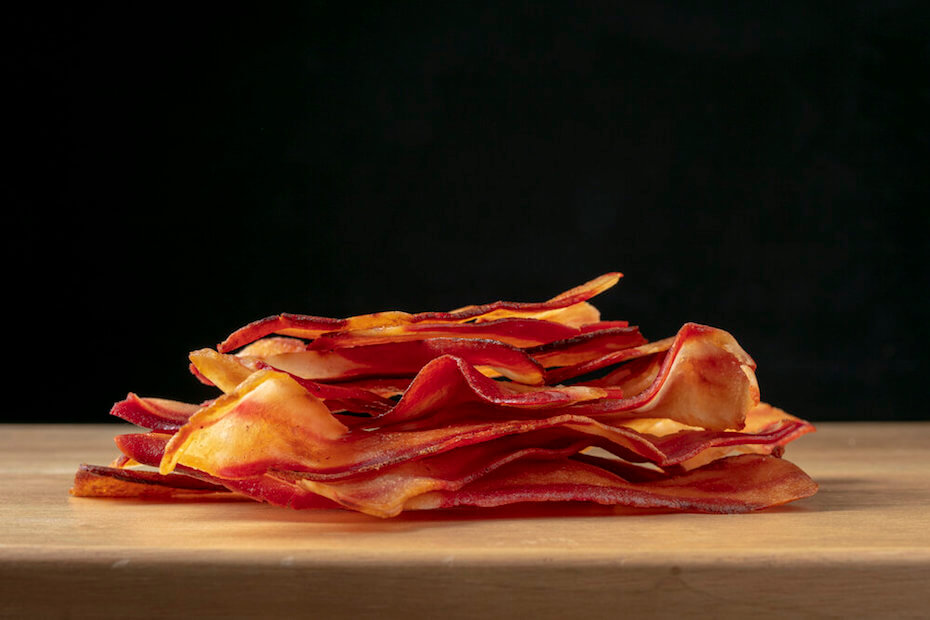 Thinking of switching to a plant-based diet? Click HERE to find out the biggest myths about plant-based eating.