The GameCube's iconic controller is one big reason I continue to hear that 2001's Super Smash Bros. Melee is still the greatest Smash Bros. game of all time.

The game was precise and fast, and the responsive GameCube controller was perfect for playing it. I bet that's exactly what inspired Hori to develop their own Nintendo Switch controller inspired by it. I recently reached out to the company to review their awesome D-Pad controller for Switch, and they sent me a Switch Battle Pad GameCube Style Controller along with it. Of course, I had to give it whirl to see if it could measure up to the original.

The Switch Battle Pad GameCube Style Controller is a USB controller for Nintendo Switch designed to replicate the look and feel of the classic GameCube controller. While it mimics the original (the silver controller pictured below) there are also some key differences. 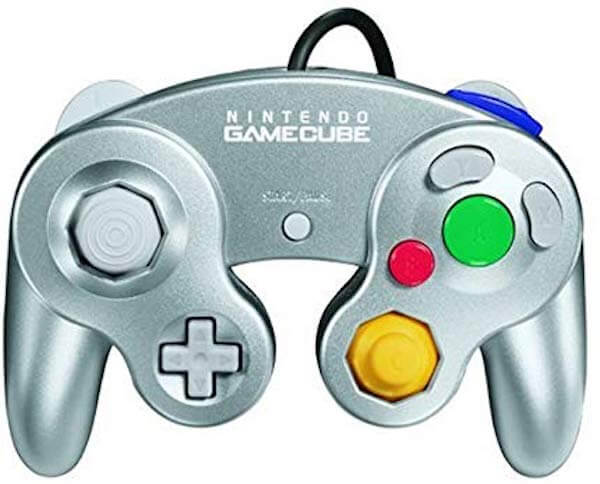 For one, Hori's Battle Pad uses the same general layout while also including all of the buttons you'll see on the Switch in handheld mode, or on the Nintendo Switch Pro Controller. Rather than L and R triggers and a Z button on the right shoulder, it places L and ZL buttons on the left and R and ZR buttons on the right.

Instead of a single Start/Pause button in the center of the controller, the Battle Pad actually features five central buttons. The plus, minus, screen capture and home buttons are all in one convenient place, with a turbo button resting smack dab in the middle. The controller is also wired, plugging into the Nintendo Switch dock via USB with the help of a 1o-foot cable.

Hori sent me a Pokémon-styled Battle Pad in yellow with a cute Pikachu design, but if Pikachu isn't your cup of tea, the controllers also come in styles inspired by The Legend of Zelda, as well as Mario, Luigi and Princess Peach. 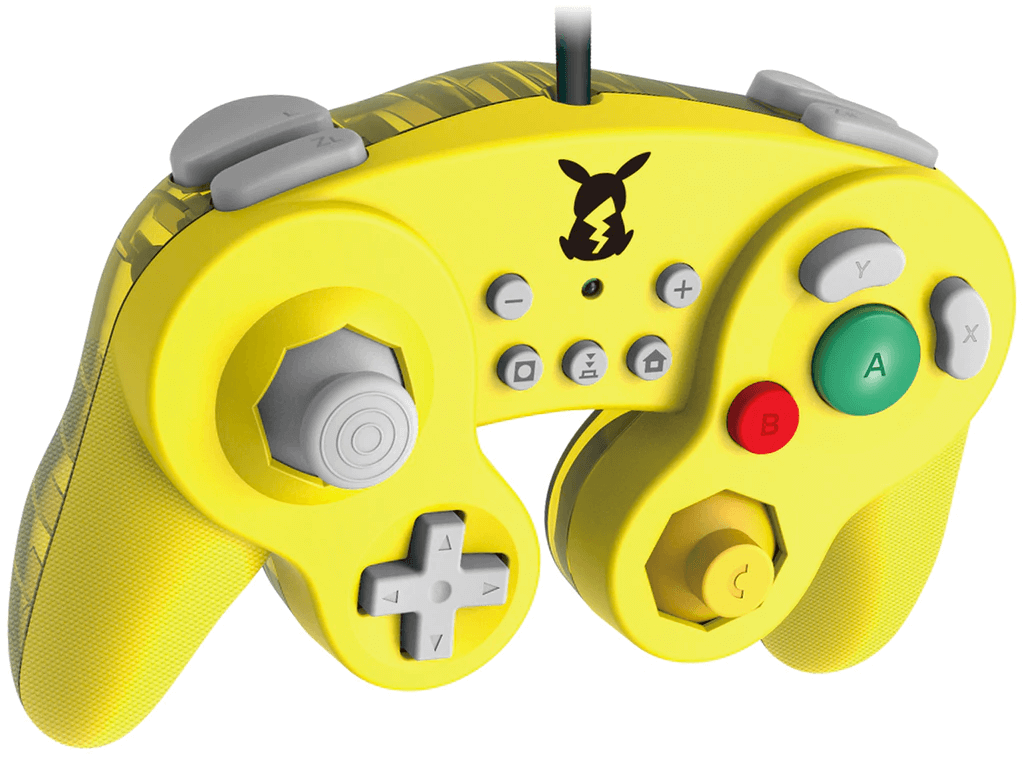 Before I even got the chance to plug the Battle Pad into my Nintendo Switch, I had to admire its looks. Hori goes all out with its designs, and this control was easy to appreciate. The front plate is a vibrant matte yellow with the silhouette of a Pikachu in the center, while the back plate is transparent in a more muted shade. The controller's handles also have an unusual texture. Not only do they feel great in my hands, but I bet that extra grip can also prevent the controller from slipping out of my hands during a particularly heated match. 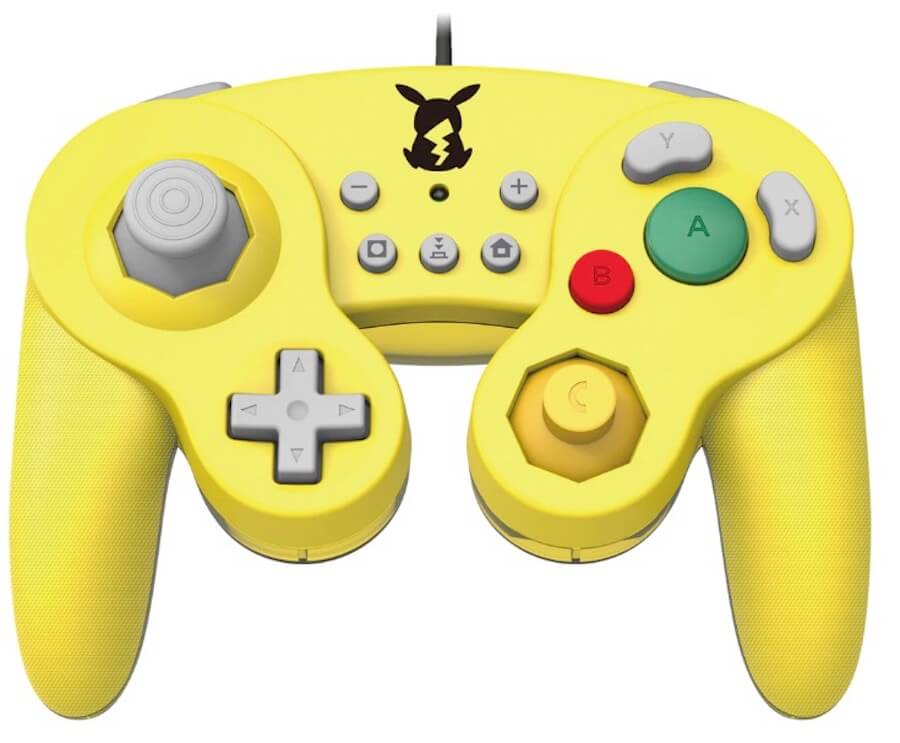 Of course, the looks are a lot less important than the functionality, so as soon as I had the controller plugged in, I booted up Super Smash Bros. Ultimate to test it out. The Switch recognized the Battle Pad as a Nintendo Switch Pro Controller, and thus will register for any games that work with that controller.

Super Smash Bros. immediately felt great. The game recognized my inputs right away, and every movement and button press felt super precise. Though the Battle Pad swaps the positions of the A and B buttons on the Switch, I was able to quickly adapt to them, and since I press up on the analog stick to jump, rather than pressing X or Y, their updated placement didn't affect my gameplay. I also found the central location of the plus and minus, and home and screen buttons, pretty handy.

What did throw me off, however, was the way the shoulder buttons are placed. While every controller I've seen puts the ZL and ZR buttons behind the first set of shoulder buttons, this controller puts them in the front, making me accidentally activate grabs when I wanted to shield, and vice versa. I didn't have a physical GameCube controller to compare them one-on-one, but with the help of the internet, I was able to see how they were alike and how the two contrast.

It seems that this positioning mirrors the fact that the GameCube's Z button sat in front of the R trigger. I find this placement weird and still haven't quite gotten used to it, though I can go into my settings and change the controls if this continues to be an issue. The controller itself feels good enough that I want to keep trying and get things right.

Since Super Smash Bros. Ultimate doesn't actually utilize a lot of the controls available on the Nintendo Switch, I decided to test out The Legend of Zelda: Breath of the Wild next. That definitely took some getting used to. It's here that it became really apparent how wildly different the placements of the A, B, X and Y buttons are between the two controllers, and I kept striking with my weapon when I meant to jump, or doing absolutely nothing when I tried to grab a sword.

Of course, it's always possible to rewire your brain to new controls, and the analog stick might have felt even better here than it did in Smash Bros. Both the analog and C-sticks also had a nice click when I pressed them down. This controller also lacks the ability to read Amiibo, rumble capability and motion controls, so it can't be used for gyroscopic aiming or motion control-only puzzles.

There's also a turbo button in the center of the controller, which you can map to any other button by pressing them both at once. While I didn't get much use out of this, I'm guessing there are certain players who will be really happy to see this feature.

Like any wired controller for the Switch, the USB plugin means it must be played in the docked mode. If you prefer to play on the go, you won't be able to make use of the Battle Pad that way.

That said, it gets the job done, and it gets it done well.

At just $24.99, the Battle Pad is a solid Nintendo Switch controller. While I do prefer the Pro Controller for its extra features and the familiarity of the button layout, the Battle Pad has the potential to be a great alternative if you're not willing to shell out $60.

If you're already used to the way your Switch handles, then this controller will work a lot better for you with games focused heavily on the A and B buttons, without so much emphasis on X and Y. That's why it works so well with Smash Bros. And as far as I could tell, this controller only works with the Nintendo Switch, but if you're using it to play Super Smash Bros. Ultimate with a classic twist, you won't be disappointed.

If you believe the 18-year-old GameCube controller is still the greatest of all time, I can't see any reasons you wouldn't fall in love with this controller, too. Plus, it's officially licensed by Nintendo, you can count on it to work well and look awesome in the process.

If you have trouble playing sidescrollers without a proper D-Pad, click click HERE to find out why the Hori D-Pad controller for Switch is a must.