The Nintendo Switch is such a versatile and convenient video game console that I don't hear too many complaints about its hardware. When I do, it usually comes down to one thing: the lack of a traditional plus-shaped directional pad.

Nintendo had used these D-Pads on the controllers for every gaming console since the Famicom in 1983, so fans were a little bit perplexed to find it wasn't a feature of the Nintendo Switch. It's an elegant design that comfortably delivers precise controls, and there's a reason it's been imitated time and time again by other gaming companies. But for the Switch, the folks at Nintendo decided to give Joy-Con controllers exactly the same buttons in nearly the same placements for easy two-player play, so a concession had to be made.

Personally, I'd been getting by fine with a set of four individual directional buttons instead of the tried and true D-Pad, but when I stumbled upon Hori's left D-Pad controllers for the Switch, they immediately caught my attention. Maybe I was missing out on some big gaming secret without even realizing it. I reached out to Hori, who generously supplied me with three different styles of their special D-Pad controller so I could put them to the test.

Hori's D-Pad Controller (L) products look like stylish left Joy-Cons, except with a D-Pad in place of four separate directional buttons. Compare the blue Joy-Con with the Pikachu-adorned Hori controller below to see the difference. 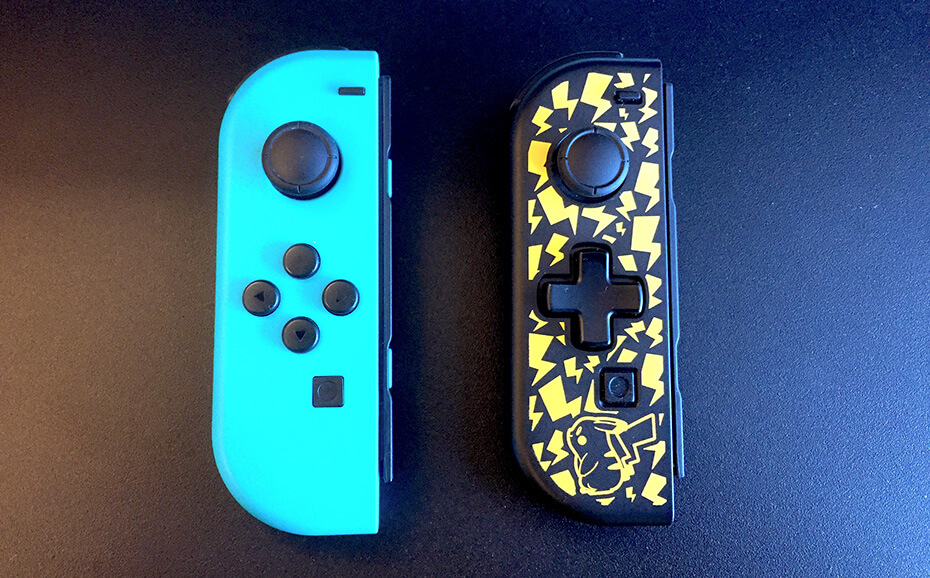 The controllers are designed to be used only in portable mode during handheld gaming. Unlike regular Joy-Cons, they don't feature motion controls or vibration. They don't have an internal battery, running on a charge from the system itself. Though they can't be used remotely, it's nice that you never have to worry about them running out of juice in the middle of your game.

Besides the D-Pad upgrade, these controllers include all of the buttons on the left Joy-Con, minus the L and R buttons (which don't matter anyway because it's not a wireless controller). They come in The Legend of Zelda, Mario and Pokémon designs and retail for $19.99, which is a deal given that a pair of Joy-Cons typically costs about $70.

As I unboxed my Hori controllers, I couldn't help but admire the aesthetic of each controller. The Zelda controller is a semi-transparent dark grey with gold detail around the joystick and D-Pad, and running down the border where the controller connects to the Switch, plus the Hylian crest at the bottom of the controller near the capture button. When I held it up to the light, I could see the parts inside that make the controller work. Though I love the neon blue color of my left Joy-Con, I found this controller to me much more impressive. 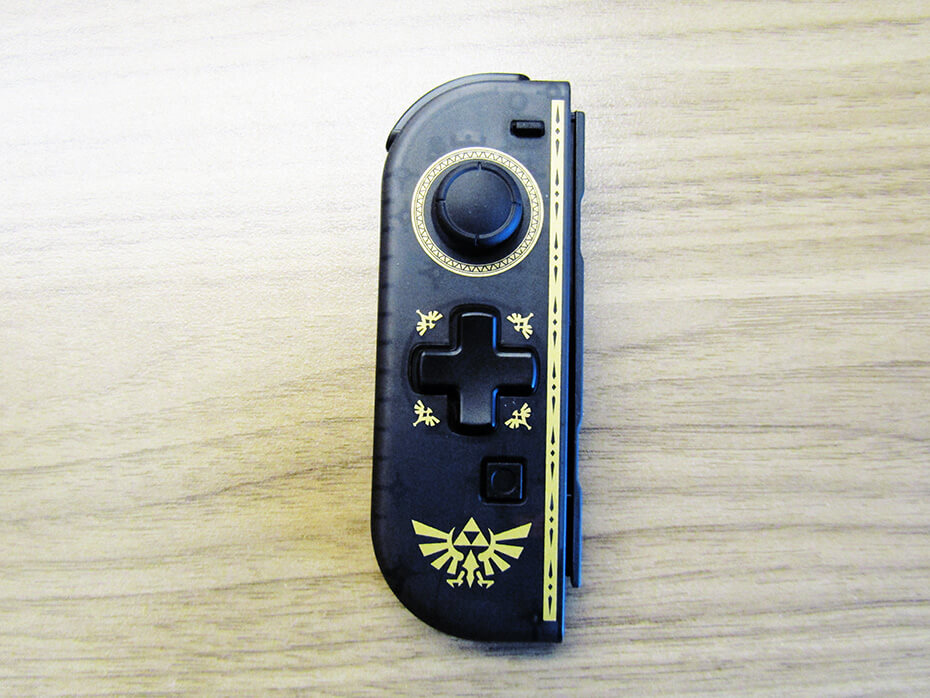 The red Mario controller was also made with translucent plastic. This one was a little easier to see through, and the front was packed with Mario graphics and stylized text featuring his most famous sayings. 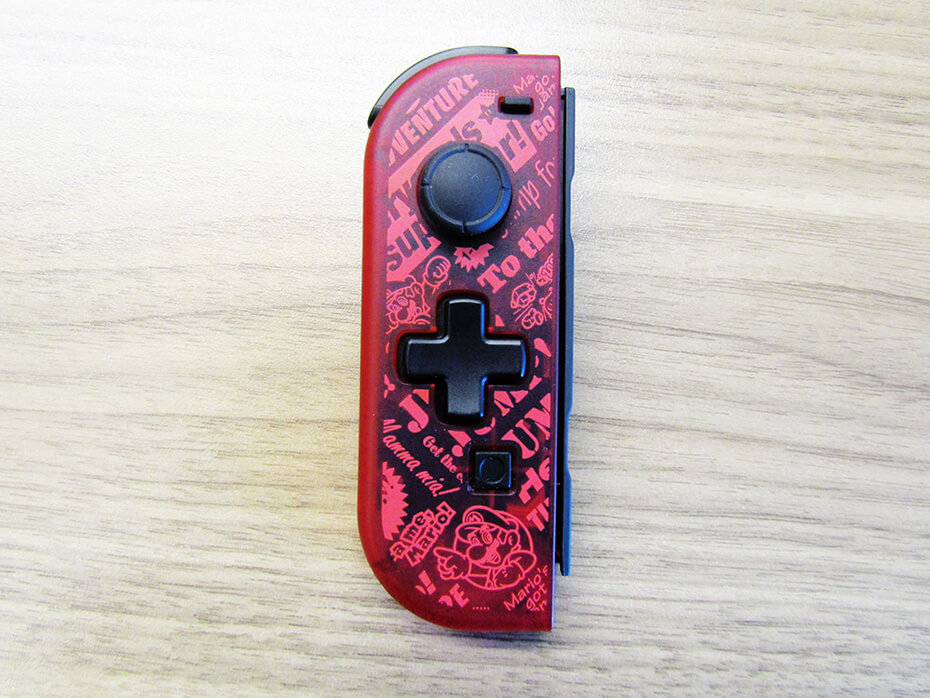 The last Pikachu-themed controller was my favorite of the bunch. Rather than being see-through, this one had a black matte plastic shell, but that appeared to make the vibrant yellow thunderbolt shapes and the outline of Pikachu pop even brighter than they might have otherwise. 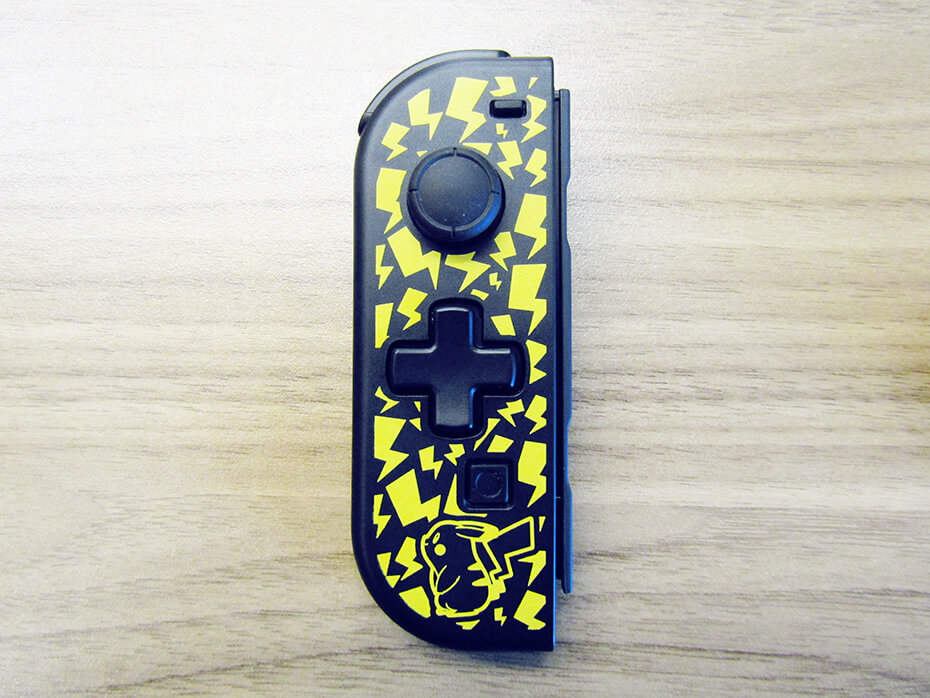 Each of these felt lighter than the Joy-Cons that come with the Switch. While detached, that lightness made them feel kind of cheap, but I stopped getting that impression as soon as I plugged one in. When locked into place, it felt sturdy and I could hardly tell the difference from a regular Joy-Con.

Before getting into the nitty-gritty with some D-Pad heavy games, I decided to play The Legend of Zelda: Breath of the Wild to see how it functioned as a typical controller.

The first thing I noticed was the slightly different feel of some of the buttons. The shoulder button had more click to it and took slightly more effort to push, while the minus and capture buttons were definitely squishier than on the Joy-Con. But the most important thing in this test as that the joystick felt great. As far as I could tell, it was identical to the one I was used to. I also got used to the D-Pad instantly, and even though Hori's controller doesn't have motion controls, I was still able to utilize them because the other Joy-Con's controls compensated for it. I tried out a few games in this manner, and they all felt great.

Of course, those games don't do much to showcase why this Hori controller is so special. Thankfully, I have Nintendo Switch Online, which gives me access to a bunch of iconic NES games. They gave me the opportunity to see why a D-Pad on the Switch can be so beneficial. Maybe it was just the placebo effect, but it wasn't long before I was performing better in some of my favorite games, including Punchout, Dr. Mario and Super Mario Bros. 3. I felt like my movements were registering just as I wanted them to be. And though I haven't been able to secure another first place win in Tetris 99, that game has felt more responsive, too.

If you've ever complained that the Nintendo Switch should have a D-Pad, Hori's D-Pad controllers were built just for you. They're a chic and relatively inexpensive way to transform your Switch into something even closer to your dream console, and they make classic and retro games feel like they were meant to feel.

However, if you've never even considered that a D-Pad might improve your gaming experience, chances are that you could skip it without missing out on anything. With the majority of the impressive 3D Switch titles focusing more on movements with the joystick rather than directional buttons, you might not have a need for the update. And if you do all of your gaming on the TV in docked mode, rather than away from it in portable mode, it won't do you any good.

Though it's pricey, the $70 Nintendo Switch Pro Controller might be a better fit for you. Personally, I can feel a real difference when I play certain titles—and even if I couldn't, they're so cute I would consider investing in one just for the style.

Looking to add more cool controllers to your collection? HERE's why the Tribute64 controller isn't just for retro gamers.