How to Have a Real Conversation With Your Parents, According to a Communication Expert

As many of us are spending more time at home with parents than ever before, it's become clearer and clearer that having open and honest communication with them isn't always the easiest thing.

It's tricky enough to navigate important topics with them without the added tension that can result from being together pretty much 24/7. Of course, you can't just skirt around the things that matter because it's hard.

We wanted some advice, so we reached out to Judy Apps, communication expert, TEDx speaker and author of The Art of Communication and other titles to get it. Keep reading to find out her top tips for talking to parents, and how better communication will change your life.

Sweety High: Why can it be so hard for teens to have meaningful conversations with the adults in their lives?

Judy Apps: Some teens say, "I tell my mum everything!" only to have their friends stare in horror and protest that they wouldn't dream of telling their parents anything. We all have different relationships with adults in our lives. Many teens rely more on people their own age for emotional support than on a parent or another adult. They enjoy the feeling of liking the same things, talking the same language, laughing at the same things and feeling understood.

Maybe that's you? It's a funny thing, as you're growing up and changing,
sometimes it feels as if the adults in your life are getting left behind, and in a way, they are. They've been in charge and called all the shots since you were born—they're used to it. But now, just as you're maturing and feeling more independent, and want things to be a bit more grown-up between you, they are having to get used to a different way of communicating with you, and they're struggling. So they dig their heels in and insist that everything stays the same as it's always been—which certainly doesn't work for you. 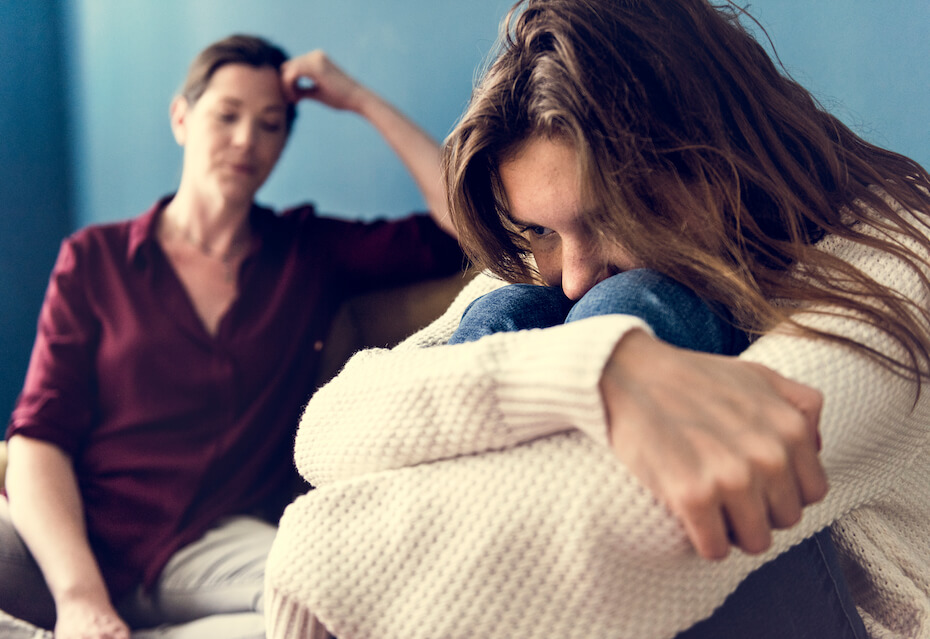 SH: What are some of the biggest blockers in communication between teens and their parents, and how can we work through them?

JA: First, we get stuck in a rut with negative messages. Straight out, most adults criticize. Your parents started when you were 2 or even younger with, "Don't get up there, you'll fall!" They did it to keep you safe, and then they didn't stop. The messages varied through the years, but the tone remained the same: "Stop watching TV, you've got homework to do!" "Don't think you're going out, you haven't helped clear the table!"

Have you noticed how conversations at home tend to go the same way? You can almost predict the actual words. You're going out, mum tells you it's not a good idea when you have school work, you say you're not going to be late, she says, well, you were late last time, you say you won't be this time, she says she's not sure she can trust you, you say for goodness' sake, mum and walk out of the room, while she… you get the picture! The next day, another conversation on an entirely different subject seems to
slide into the same groove and end with a similar outcome. So, family talk gets stuck in a rut.

Secondly, the difficulty is often that you've got used to evading adults' negative responses. Maybe you told the truth about something you'd done in the past and got into terrible trouble for it. It makes sense to avoid that, so next time you adapt the story a bit to get a less violent reaction. Then this becomes a habit. You're no longer straight with them. One teen told me, "There's no way I can tell my dad anything without him hitting the roof, so I don't anymore. I just say as little as possible—or tell him something different." And there we have it: genuine communication at a standstill.

SH: Why is it so crucial for teens to have an open line of communication with their parents?

JA: I could understand some of you giving up. You might say, "I can't be bothered. It's just not worth it." But, deep down you kind of know it is. Family bonds can be unstable or break down, but they can be the strongest bonds there are. When the chips are down, through thick and through thin, you want your family to be there for you. Why? Because they're family and they're family forever. Parents can often be your greatest support, even if it doesn't feel like it now. So, it's well worth finding ways that you can talk to each other. 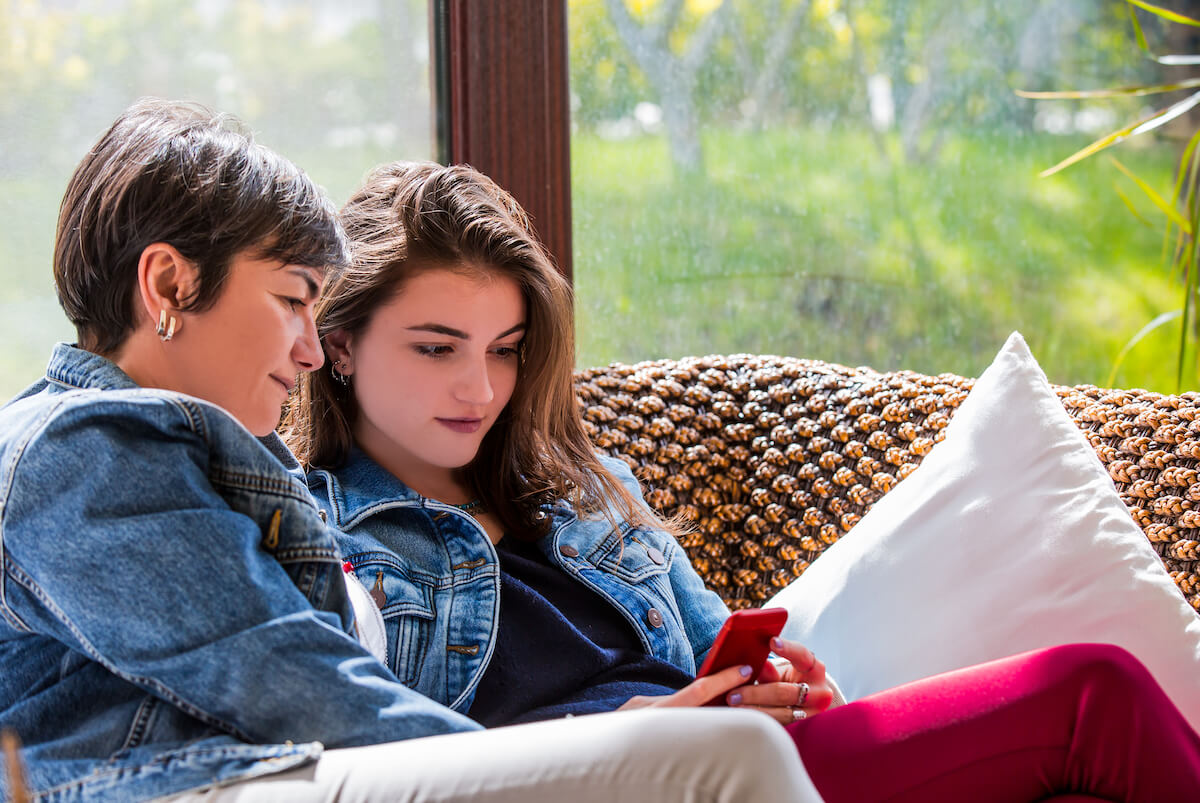 SH: If you're bad at starting conversations with your parents, do you recommend any specific strategies for getting things going?

JA:  Do you want the good news or the bad? Many therapists tell us that family relationships are the hardest because they're the most complicated. But there are things you can do that are not hard and will make a positive difference. Before you even take that first step, put your big-girl pants on and realize that it is possible to change things. It's a matter of doing something different. They can't react in their usual way, and that's the way to a better relationship.

First, you need to find a good time. Sometimes you get the negative messages because the adults in your life are too busy. Avoid obviously busy times of day or too late in the evening when people are tired.

Secondly, keep your cool. Get them to realize that you are sensible and mature. Try to remain calm, whatever their response. It's not always so easy, but really worth it. Avoid clashing. So, if they say, "You're just too young and that's the end of it," in a sharp voice, avoid direct opposition by shouting out, "I am old enough!" Instead, say something like, "I know it seems it to you, but I just want to explain to you how it is for me," in a calm voice. You disagree with them, but you don't fight. It's important that you don't get aggressive.

Third, stay on track.  Don't get distracted by their response, even if it's harsh. If your dad threatens not to pay for your school trip for being difficult, don't get upset about the school trip, and put that
aside for another day. Stay with what you were saying at that moment.

Finally, ask about them. Make things feel more equal between you at any time by showing an interest in them, as you might with people your own age. What things were they into at your age? What were they allowed to do? did they sometimes feel frustrated? If you ask with genuine interest, you might be surprised at what emerges.

SH: Do you have any conversation tips for anyone who gets nervous of flustered when they have "important" conversations?

JA: This can be a bit unnerving—especially if you want to talk about something serious or difficult. You're certainly not alone, everyone finds it so. My best tip is the very simplest: Just take a big breath and start. A big breath gives you confidence—ask any professional entertainer or sportsperson. Next, say what you're feeling. Especially if you're flustered, tell them what's going on for you. At the very moment you want to hide what you're feeling, tell them. It helps the fear to go away. You might say, "I've wanted to tell you about this for ages, but I don't quite know how to say it," or "I'm feeling really awkward about it, but…"Feel free to take your time with it.

Thirdly, as real, true things aren't always the easiest to express, give yourself time by introducing what you want to say before you actually say it. Then by the time you say the important bit, you've settled down. For instance, "There's something I want to tell you about happened at school. You know I'm friends with Jen? Well, something happened, and I'm feeling really bad about it." That gives you three sentences to get you going, before you actually say the difficult bit. 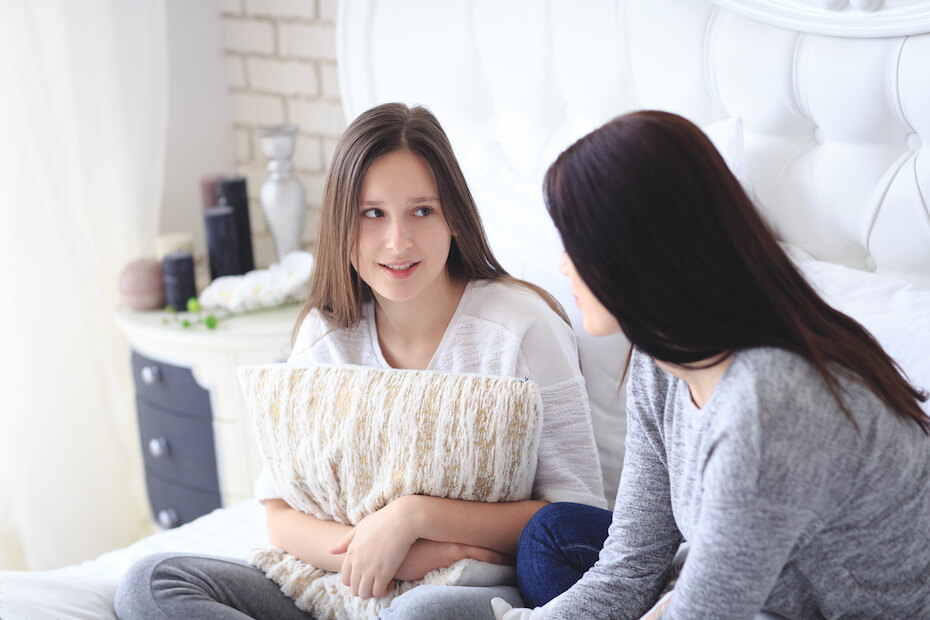 SH: What else should we keep in mind when it comes to talking with our parents?

JA: It's worth getting a good communication channel going with the adults in your life. It'll make life much better for you in so many ways.

Step up to realizing that you can do something about it! You're at an age when you can start influencing your parents. They taught you loads of things when you were small, and now it's your turn to train them a little.
You'll be amazed at the big differences you can achieve through little changes on your part. Hopefully, in 10 years' time you'll feel like equal adults—and good friends. Here's to some happy conversations!

Having a tough time getting your points across? Click HERE for more tips from Judy Apps on becoming a better communicator.