I've always been an omnivore, and while I'm definitely a meat-eater, I am always on the lookout for tasty alternatives to meat that are just as good as the real thing.

I used to live in Los Angeles, where vegan restaurants were plentiful and a delicious plant-based meal was just an online order away, but since I've relocated to a middle-of-nowhere house in the woods in the Pacific Northwest, meat-free eats are harder to come by. While the local grocery stores do have some options, they don't match up to what I could order from a restaurant.

That's precisely what immediately drew me in when the folks behind Hungry Planet reached out and asked if I'd be interested in trying their plant-based meats. The brand recently launched its Heat & Eat line, and I was more than happy to try everything out to see if everything tasted as good as it looked.

Hungry Planet is a brand setting out to benefit the health of the planet, as well as the people who eat their foods, by serving a range of nutrient-rich and delicious plant-based meats. Their "meats" are designed to be swapped in for traditional meats in any meal, fitting into your current lifestyle while delivering all the protein and similar flavor profiles, without any harm to animals. That means less fat, fewer calories, no cholesterol and antibiotics and plenty of protein in each and every serving.

While their flagship products are their ground meats, subbing in for beef, pork, chicken, crab, chorizo and Italian sausage, they recently launched a line of Heat & Eat frozen products which, as the name suggests, only need to be heated up to be enjoyed. The line includes six products: Crispy & Fried Chicken, Grilled Chicken Strips, Grilled & Diced Chicken, Pork Thai Meatballs, Pork Gyoza and Italian Sausage Meatballs. Each item is available in six-packs of approximately eight oz. bags for $54.99, while a variety pack of nine bags is available for $84.99.

Plant-based fried chicken products can be pretty hit-and-miss, so I was curious about where Hungry Planet's crispy, fried chicken patty would land on the scale. As with all of their Heat & Eat foods, it's recommended that you thaw them in the fridge from frozen before cooking and eating, so I did that before popping one in the air fryer until it was heated through and ready to eat.

Based on the image on the bag, I was expecting a circular "chicken" patty, but the real thing was more of a long-thin oval. That made it perfect for a pita sandwich. I dressed it up simply by basically coating the whole patty in barbecue sauce, tucked it into the half-folded pita, and I was pretty impressed with my first bite. Texture-wise, it was spot on, feeling meaty with a super crispy exterior, and paired with the BBQ sauce and pita, I could barely tell the difference between it and a real frozen chicken patty. I couldn't quite prepare it to a fresh-from-the-fryer, buttermilk-dipped piece of fried chicken, of course, but I still enjoyed every bite. It didn't leave a lingering, unpleasant aftertaste, and I was super full by the time by pita sandwich was finished. 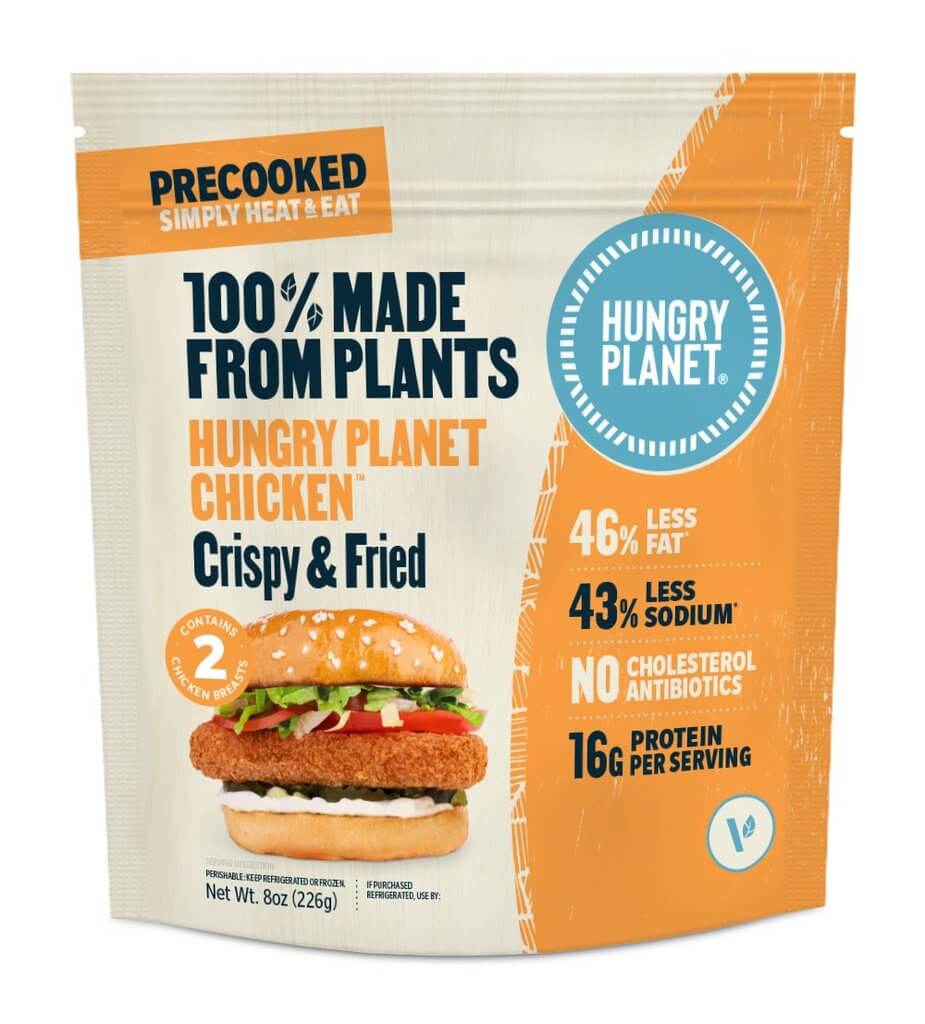 There were just too many options when it came to using these grilled "chicken" strips, but eventually, I settled on trying them out with some penne pasta with a mixture of tomato sauce and alfredo. This time after thawing, I heated them up in a pan with a bit of olive oil, though you can cook them using any method you'd use to cook chicken breast.

I soon found that I liked these even more than the fried chicken. They were an incredible substitute for real chicken breast, lightly seasoned in a way that beautifully complemented the pasta and the sauces I'd added. The strips were even surprisingly tasty all by themselves, and I very much look forward to digging into the second bag I received. 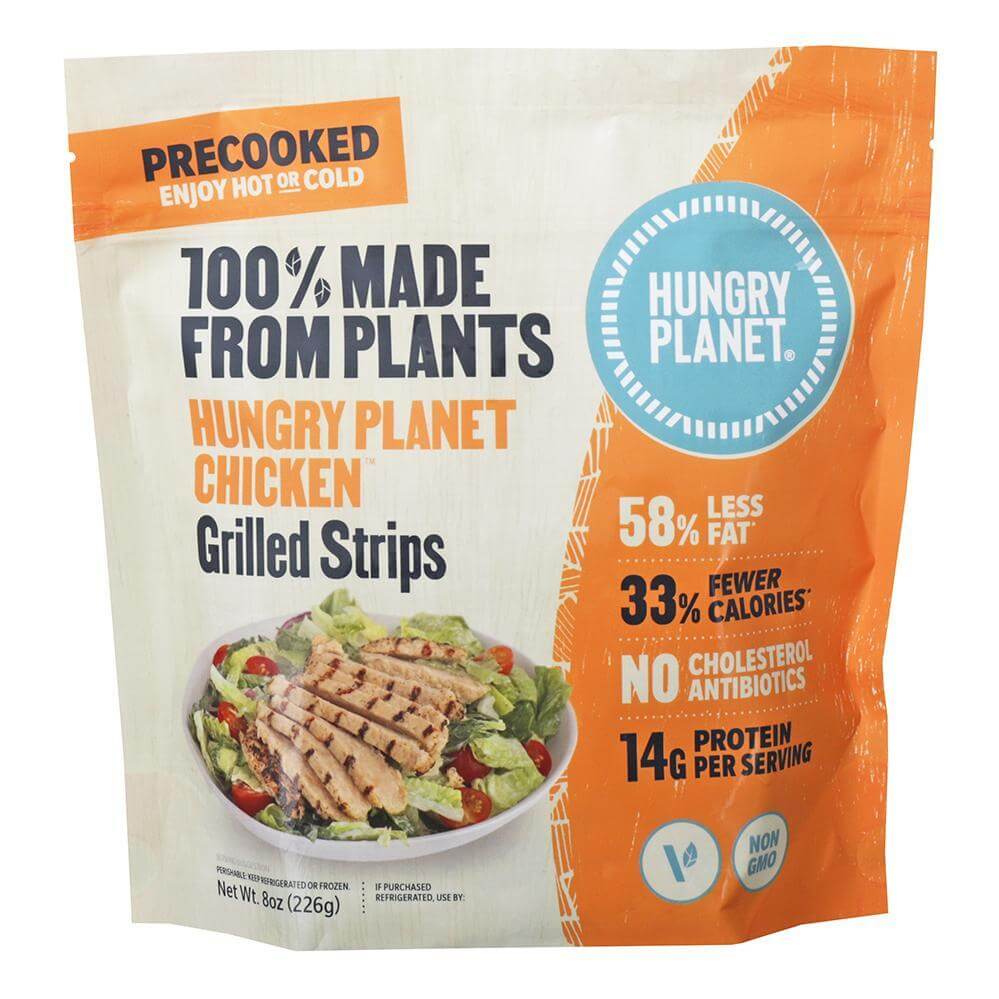 I don't have too much to say about the grilled and diced version of the chicken, as it's pretty much identical to the strips, but in small, bite-sized pieces. I prepared it using the same pan method and added it to a family recipe for pea salad with a creamy, lemony dressing. Again it was delicious, and a very convincing sub for real chicken. 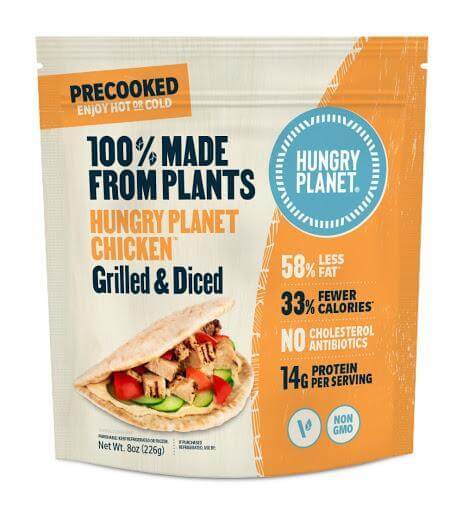 Now these were something I was really looking forward to. I'm a sucker for meatballs that incorporate Asian ingredients, and these sounded incredible. I prepared some white rice in a rice cooker as I heated these up in a pan until they were nice and hot inside, and then served them up with Sweet Chili Sauce. Immediately, I knew I'd picked the perfect pairings for the meal. The meatballs themselves had a soft, meaty texture with garlic, lemongrass and soy notes, but the heat and sweetness of the sauce really made them pop, and with the white rice, they were all too easy to scarf down. 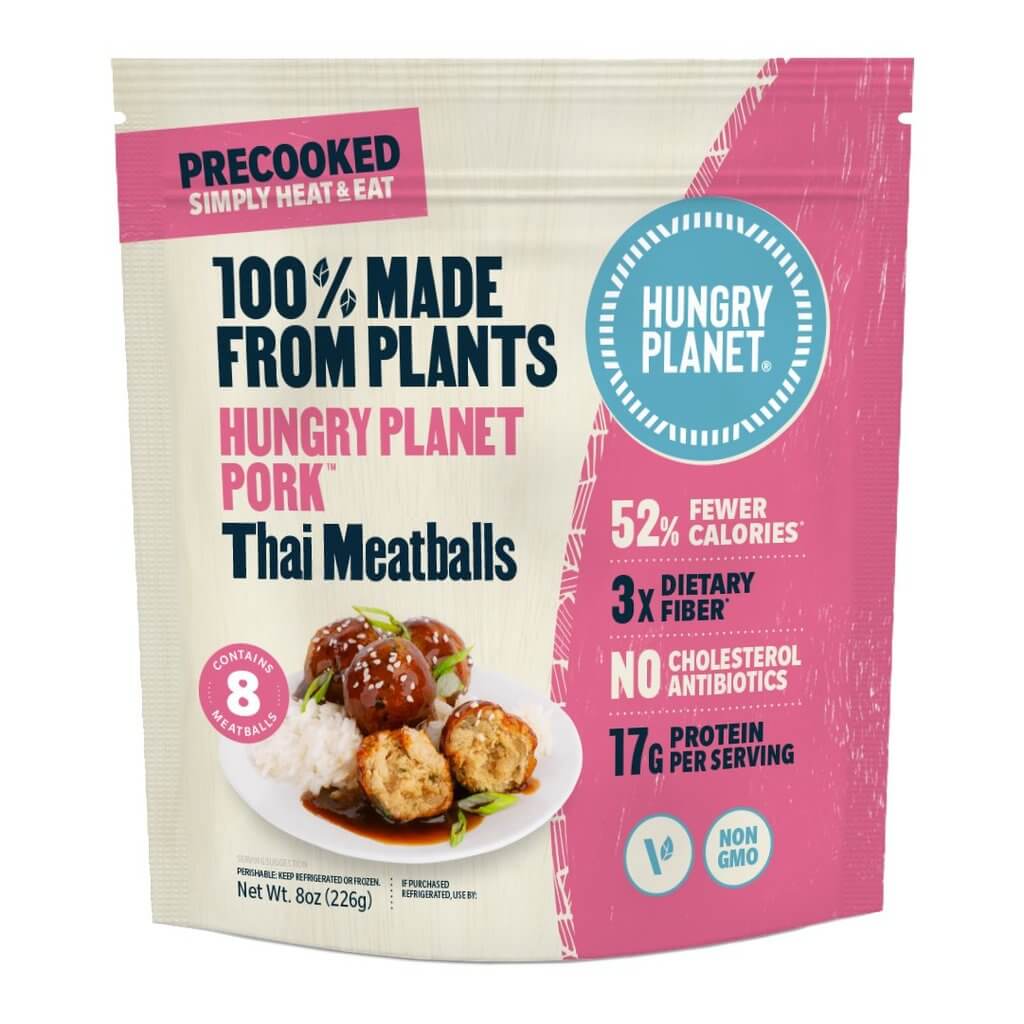 This is one I was slightly hesitant about, only because I'm picky when it comes to gyoza. We make our own at home using gyoza wrappers, ground pork and a blend of veggies and spices, and they turn out good, so the bar was set pretty high. When it came to the meatless version, I pan-fried them until they were heated through and had a bit of a crisp on the outside, mixed up a dipping sauce of soy sauce, rice vinegar and spicy ponzu, and got to dipping. I have to say that, even though they don't stack up to mine, I was surprised at how good they are—especially in comparison to real pork frozen gyoza I've had in the past. They're seasoned just right, with a bit of garlic and ginger flavor, with an awesome texture. I'm so glad I have another bag waiting for me in the freezer. 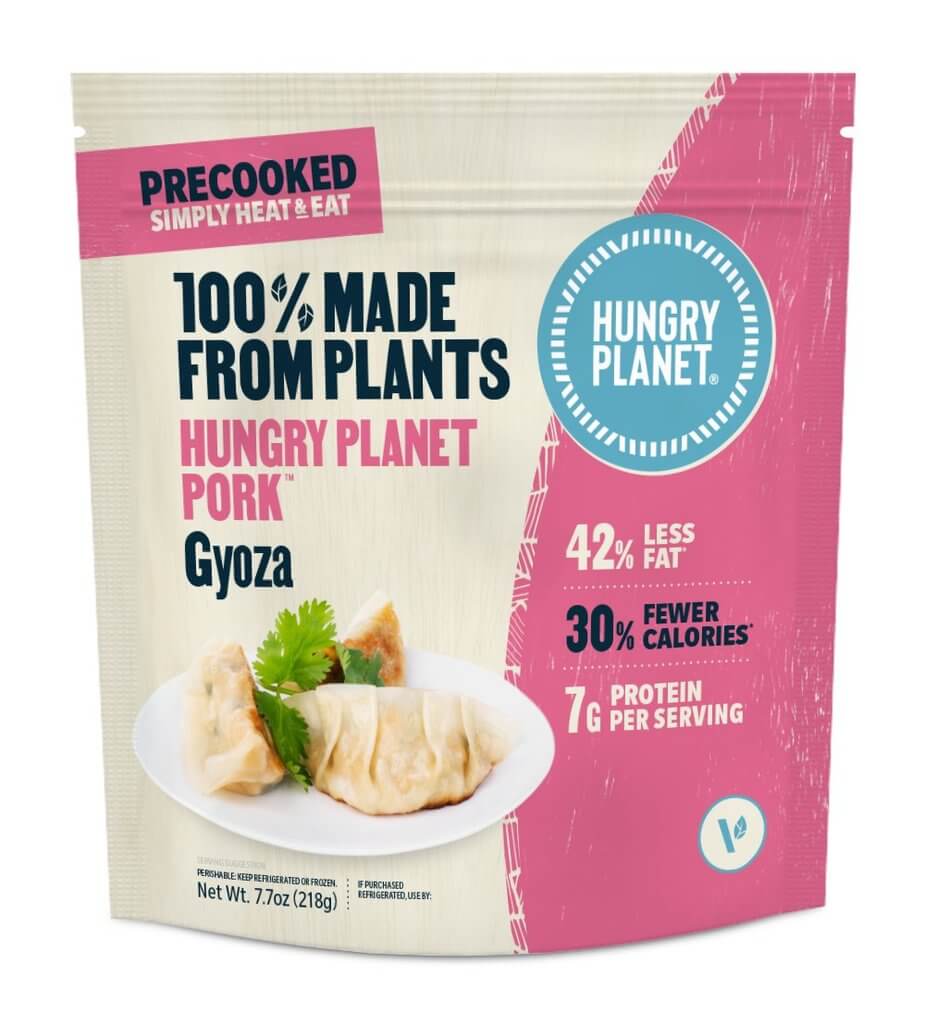 Last were the Italian sausage meatballs, but going into the taste test, I already had somewhat of an idea of what to expect from the Thai meatballs. I heated them in the same matter, and enjoyed a few of them in some fettuccine with basil marinara. I have to admit I'm not the biggest fan of Italian sausage to begin with, as there's something about the herbs and spice combination that doesn't really suit my taste buds, but I didn't have that issue at all with these meatballs. I think they're spiced just right, with a texture that pairs great with pasta, and I would definitely try them again. 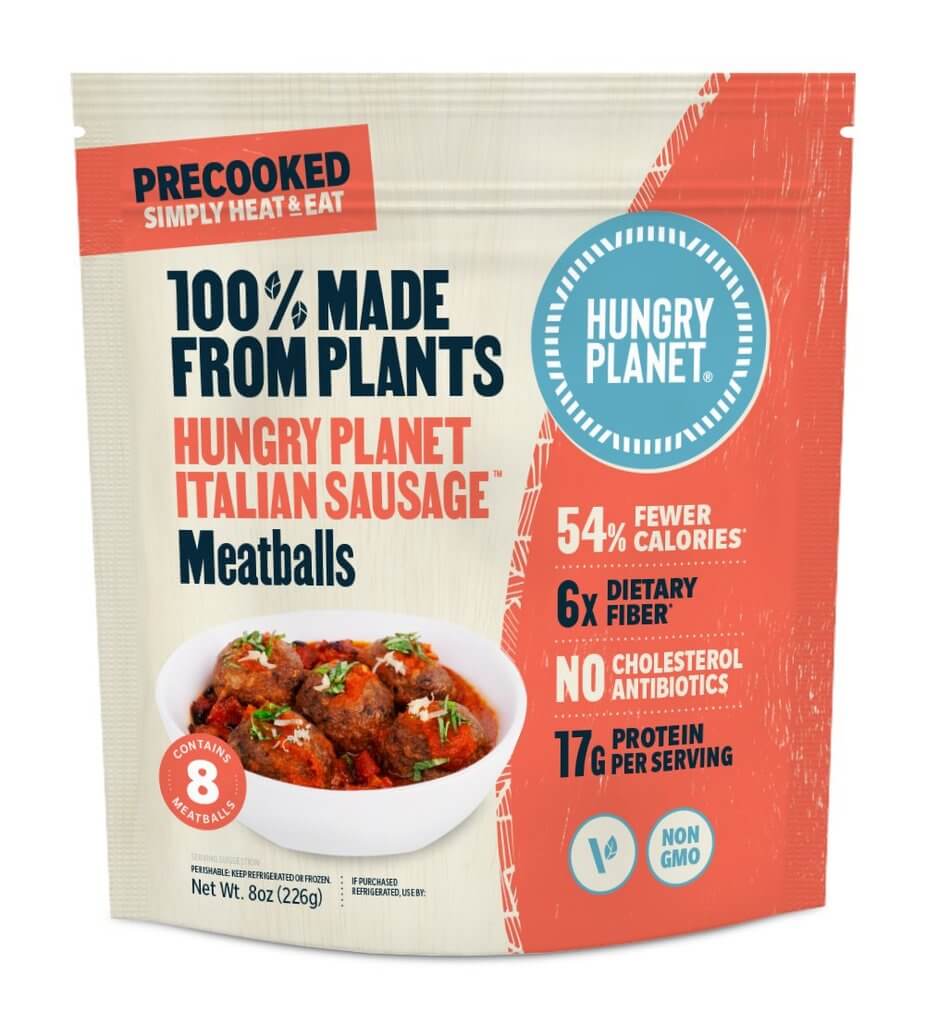 While I don't think Hungry Planet's Heat & Eat line will appeal to all meat-eaters, the taste and texture are both great, and they're close enough that anyone who's eaten vegan meat substitutes will know their quality when they taste it. Not only is everything super easy to heat up and incorporate into a wide variety of meals, but it's all packed with protein, and better for you and the environment to go meatless.

While the brand's offerings are a bit pricier than the other vegan options you'll find in the freezer aisle, the price isn't that much higher, and I think it all translates to the quality of their products.

Trying to eat less meat? Click HERE to check out our favorite vegan recipes for your next backyard barbecue.