If You Love Cats, Puzzles and Existential Angst, You Need to Play I and Me

The new Nintendo Switch game I and Me is about cute cats, synchronized movements and existential angst. What more could you want from a $10 title?

The premise of the game is simple. One day, a fuzzy black cat stumbles into another version of itself. The two cats are one in the same, leaving the cat to ponder what it means to be alone and view itself from the perspective of an outsider. 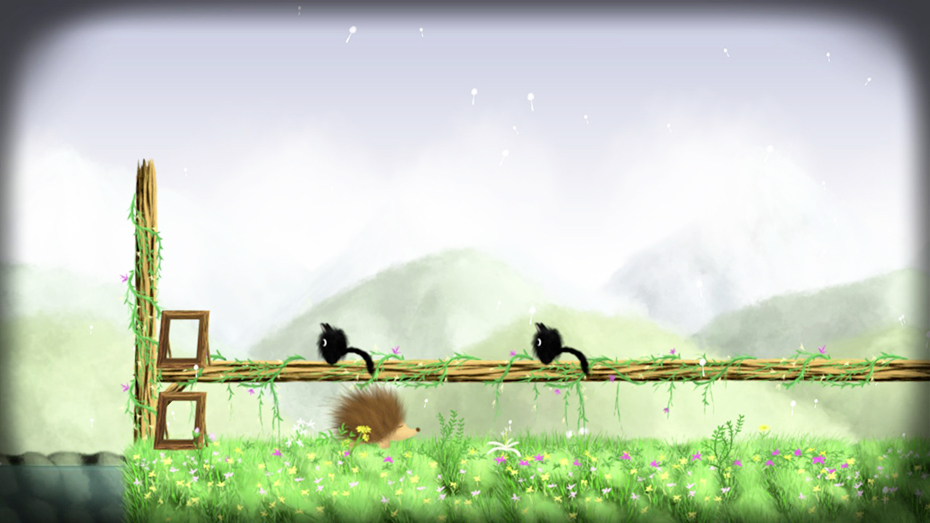 And since these two cats are effectively the same being, when it comes to actually playing the game, a single input controls both cats, causing them to move unison. Move one cat right and the other will move right. Jump and the other will jump.

To complete each level, you must get one cat behind each of the two frames placed within the area. When they do, the two cats face the screen and you hear a camera shutter as if they're posing for a photograph. That may sound simple, but as the game progresses it becomes tougher and tougher to accomplish. 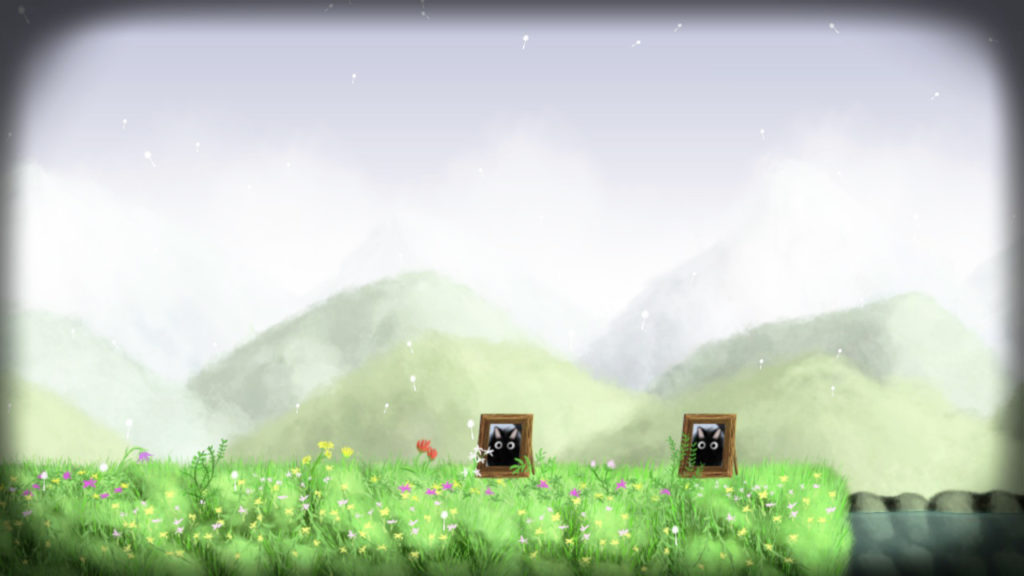 In the beginning, it's as easy as walking into the right spot, but soon you must learn to utilize your environments wisely and be aware of both cats' locations at all times. I can't tell you how many times I accidentally jumped into a wall of spikes with one cat because I was too focused on the other. Touching obstacles like spikes or enemies—or falling into pools of water—will force you to restart the level. 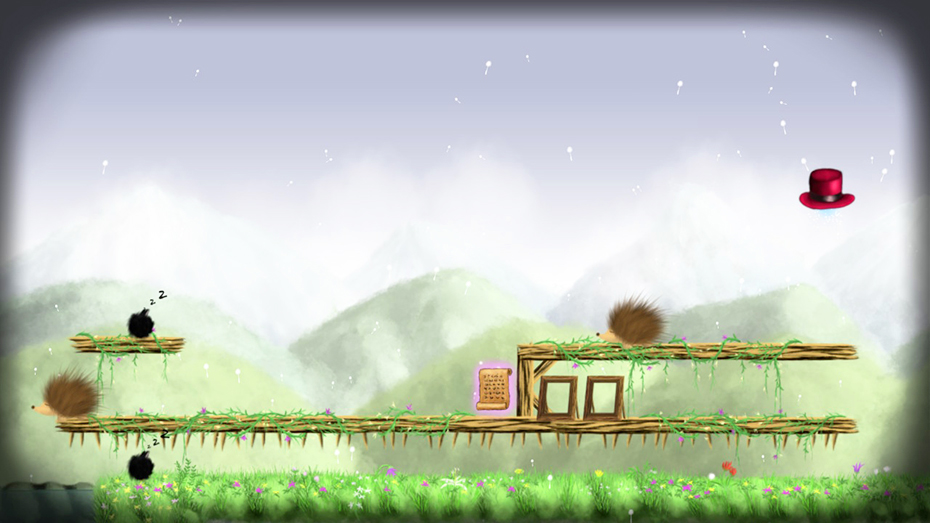 The game has nearly 100 puzzles to solve across four chapters representing the four seasons, and each one includes increasingly complicated puzzles with new gimmicks. Later levels incorporate levers that manipulate the level, teleportation clouds and even a magic wand that reverses the controls of one of your cats. 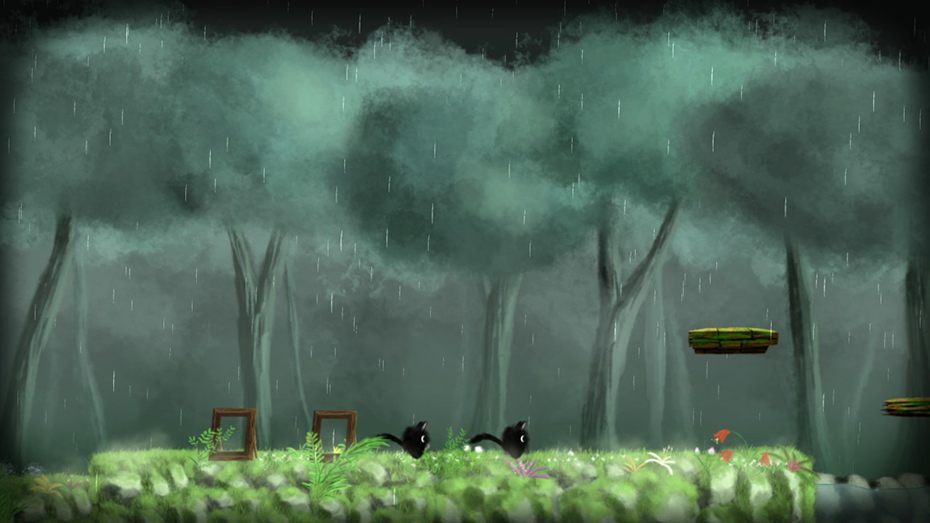 But even as the areas get more and more complex, the game is set up to be a pretty stress-free experience. The atmosphere is totally calming, with lovely hand-drawn animation and a soothing classical score. The game gives you plenty of room to breathe so you can come up with your whole plan of attack before hopping into the level. It's still possible to get frustrated when a solution just doesn't click, but the warm appeal of the game will prevent you from getting too impatient with it.

And if you're ever truly struggling with a level, a button press will reveal a hint. This plays a short video clip of the level demonstrating how to set your cats up for success. While these hints might give away too much for more advanced players, they're also totally optional.

The cats themselves are also very cute, and I found myself laughing out loud almost every time they stepped into the frames to have their picture taken because it was so charming.

Contrasting with the sweetness of the game is the intermittent sense of dread regarding the cat's uneasiness with its double. It faces an existential crisis when it starts to view itself as a stranger, which in turn can make the player begin to consider these things. If you were able to step outside of yourself for a moment, how would you view yourself from an outsider's perspective? Would you even like you?

There are also 20 optional story pages placed in levels throughout the game, often in out-of-the-way areas that take extra finesse to access. These reveal even more about the cat's story and inner struggle. 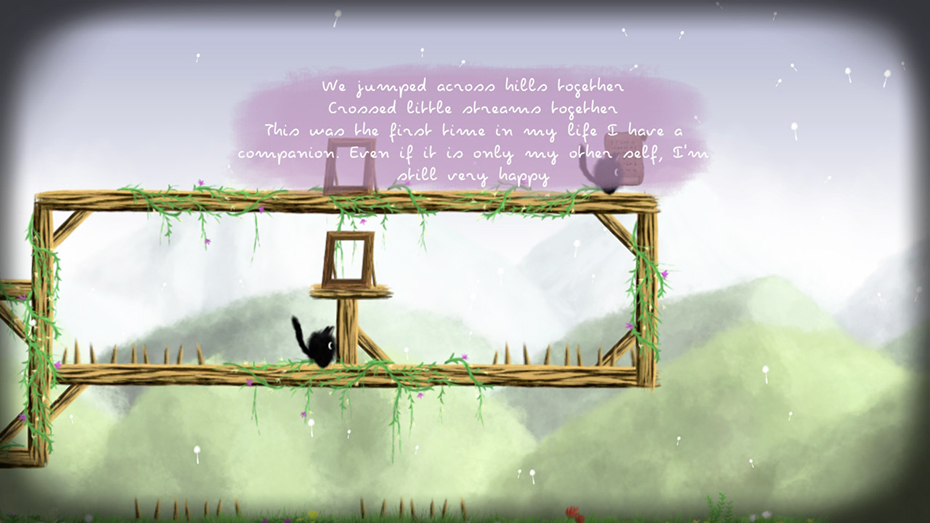 Overall, the idea behind this game is quite simple, but the levels typically aren't. While it's not a particularly long game—you can breeze through it in a few hours—it's because there's no excess in this game, with only the essential bits left in.

Some may find the similar nature of the puzzles repetitive, and with 92 of them, they'll likely tap out before the finish the game. There's also not a lot of replay value here, as once you've figured out a solution, it'll stick with you for a while.

Still, if you're looking for a fun, cute puzzler that'll have you hooked and really get you thinking, I and Me is a worthy addition to your Nintendo Switch collection. You can get it for $9.99 on Nintendo's eShop.

And if you're looking for more Nintendo Switch games to play, click HERE to find our why you should definitely be playing Splatoon 2.