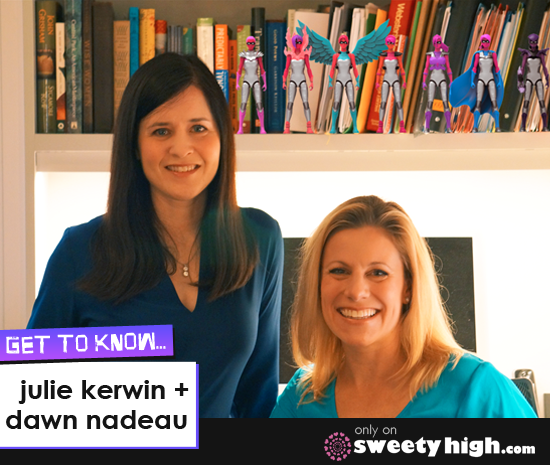 We conducted a Q&A with IAmElemental founders Julie Kerwin and Dawn Nadeau to learn all about these empowering new action figures, and why taking IAmElemental from inception to reality was so important to them.

What were you two doing before you came up with the idea for IAmElemental? How did your backgrounds contribute to your work with the company?

Julie: Before Dawn and I developed IAmElemental, I was an independent music producer and co-founder of Club Rock Records. With our partner Kevin March, currently the drummer for Guided By Voices, we started an experimental song-writing program that evolved into a full-fledged music production company. The talented teens we worked with were called The NowhereNauts. Though they are no longer together (college beckoned), I am incredibly proud of the two albums that were produced in the five years we worked with them. This experience was my first taste of entrepreneurship. I would not have had the confidence to team up with Dawn to create IAmElemental if I hadn't had this experience first. Having said that, the biggest contribution actually had nothing to do with business. Working with teens reminded me how important it is for young girls (and boys) to imagine themselves as strong, capable individuals so that they can grow into healthy, well-adjusted humans ready to tackle whatever challenges the world throws at them.

Dawn: I have had the good fortune to work with very talented people at amazing companies such as Goldman Sachs, Fortune magazine and Fast Company magazine during my career. I also worked with many of those same organizations and people on my own as a consultant while my girls were young. Having worked in a lot of work environments as well as on the inside of both established and growing brands, I have a unique perspective on creating companies and work that matters. Right before we started IAmElemental I also accomplished a long-time dream and became a certified self-defense instructor. The challenge, the failure and the persistence required to achieve that particular goal have influenced my approach to work in many small ways. I still teach twice a week here in New York City. Also, the connection Julie and I had as friends first, and then business partners, creates a very strong foundation to work together every day. Our friendship started, as many friendships do, over shared experiences and shared observations, humor and world views. Those commonalities inform much of what we do and how we do it every day. It is also nice to work with someone who you know gets you.

Can you tell me a little bit about the inception of IAmElemental?

Julie: The idea for IAmElemental was born out of an ongoing conversation between myself and Dawn that led us to ponder why male superheroes, like Spider-Man, appeal to both a 4-year-old boy and and 40-year-old man, but the same could not be said about female superheroes. I had just read Angela Duckworth's pioneering study about grit, heard brain expert JoAnn Deak pronounce that "boys and girls are as different from the neck up as they are from the neck down," and was knee-deep in "girl power" read-alouds with my then-six-year-old son when, as improbable as it may sound, the answer seemed to burst forth fully-formed (and fully-armed) like Athena from her father Zeus' forehead. "It's not superheroes, it's superpowers." Five little words, that's all it took. Within twenty-four hours we had a fully-formed company mission, a domain name, and the start of a very big idea. I think that the key is that we are marketing more than just an action figure, more than a movie tie-in, we are marketing a message about character and empowerment. We think that kids are far more capable of understanding these concepts of power and character than grown-ups realize. We did not dumb down the concepts; They aren't Betty Brave and Patty Persistence, for example. Rather, by breaking character down into the building blocks of courage, we are making them accessible to kids. We believe that if parents wait until they are older to talk about things like empathy and kindness and persistence and industry, it's too late. When children become aware of these character traits, they quickly are able to understand that they can use their powers to create good in the world. That is the larger message that IAmElemental is promoting.

How much planning and development took place before you could launch your Kickstarter campaign?

Dawn: We were in development for close to two years before we launched our Kickstarter campaign. It takes an incredible amount of time, and persistence to start with a question, come up with a solution and then create that solution where none existed before. It helps when you have a partner. One of the core concepts of IAmElemental is "Shared, everyone's powers grow stronger." That is true in the superheroine universe and it is true in the business world as well.

Were you surprised when your Kickstarter reached its goal in just 2 days? What has it been like to get such an outpouring of support?

Dawn: Julie and I were shocked and incredibly moved to see the outpouring of support during our campaign. The two years we spent in development were spent largely by ourselves, talking to each other and our small design team at EleventyPlex in Cincinnati, Ohio. When we came out of our hobbit hole, as Julie often says, and put our campaign up on Kickstarter, we were terrified. It is very hard to open up that which you have held closely to public scrutiny. We are profoundly grateful and humbled by the response from a very broad range of people, and also are keenly aware of our responsibility to stay focused and deliver the best products we can to our customers.

Julie: We set out to specifically design action figures for girls because no one else was doing it. There are shelves and shelves of action figures for boys, but you will not find one shelf in a toy store devoted to action figures for girls. The female action figures on the market are designed for the collector community, and they are designed in a way that renders them inappropriate as playthings for the average 4-year-old, girl or boy. The reason that these figures are almost always geared toward men is simple; Historically, superhero comic books have been purchased almost entirely by males. As much as Dawn and I loved watching Lynda Carter play Wonder Woman on television when we were young, the truth is that 90% of the Wonder Woman readership is male. She was created for men and drawn for men. And, I imagine, that same could be said about almost every female comic book character. The problem is that we don't live in a bubble. Thanks to (for example) the heavy overuse of photoshop which "erases" real women and replaces them with doll-like imitations, the constant abuse and put-downs of women on low-cost reality television, and even the "tarting-up" of iconic figures like Strawberry Shortcake and Holly Hobbie, girls (and boys) are internalizing messages about what it means to be a "perfect" woman that are completely unattainable because they aren't real. As parents, we are concerned about the research that shows that portraying women in the media and, by extension, the toy world in an unrealistic way negatively affects the way that girls perceive themselves, can lead to lower self-esteem and body-image problems, affect social behavior, and even discourage young women from entering certain professions. To that end, we are trying to put a healthy image of women out into the world for young girls to emulate and identify with as they play.

How did you come up with the super powers for each of your heroines? Why was it so important that the action figures exhibited these traits?

Dawn: Play is very powerful. The stories we tell ourselves while we play have a huge impact on the stories we tell ourselves later in life. Belief in fantasy and magic, and the creation of epic stories of adventure and action become the soundtrack in our heads. We all need to believe that we are capable of extraordinary acts and to know we have inside of us powers that are greater than what we have previously imagined. The super powers that are inherent in each of the Elements are an important component of sparking the stories we envision girls telling themselves and each other. The powers are seeds from which hours of play will grow. Bravery can create a protective force field around herself and others – Honesty can make others tell the truth – Energy can control electrical impulses. Those are powerful ideas to play with. Or, as we like to say, let's "Play With Power."

Julie: By offering a child both the definition of the power as well as the correlating superpower, we are inviting them to think about what it takes to be a courageous person, and also giving them the tools to play in a different way than they do with other toys. We like to say that we aren't anti-doll or anti-princess. Rather, we believe that if you give a girl a different toy, she will tell a different story.

Fear is a really interesting power. I'm assuming she's the villain? Can you tell us a little bit about why that element was included in the lineup?

Dawn: Ah, Fear. One of our most talked about Powers. We have lots to say on this subject. So much to say, in fact, that we have an IAmElemental Blog post coming soon on this topic – so stay tuned for more on Fear.

Can you tell me a little bit about the phrase: "It's not superheroes, it's superpowers"?

Julie: IAmElemental is founded on the premise that every single one of us is already a superhero, and that all the superpowers we could ever want or need are already inside of us. One way to inspire girls to be their best, most powerful selves is to allow them to re-imagine themselves as the hero of their play experience. To that end, we re-imagined the action figure concept. In the IAmElemental Universe, the girl is the superhero, and the figures are the personification of their powers. These Elements of Power break down the building blocks of character into easily digestible bits. Put a "Power" in their hands, and kids instantly get it.

What are the next steps following the success of your Kickstarter?

Dawn: We are incredibly focused on production and execution right now. We have a lot of Kickstarter Backers to surprise and delight and a lot of new customers at iamelemental.com, as well as some great independent toy stores that have pre-ordered our products for the fall. We are in development on our next series, which we have announced will be Wisdom, as well as 6.5 inch figure that we think fans, adults and kids alike, will love. So stay tuned. We're just getting started.

To learn even more about IAmElemental, you can check them out on their social media pages below. You can also become a part of our girl power community at SweetyHigh.com!