I Tried IT'SUGAR's Stranger Things Candies, and This Gummy Waffle Is As Strange As It Sounds

Candy shop IT'SUGAR and Stranger Things teamed up this year for an amazing edible collaboration featuring candy waffles, edible Upside Down slime and more—so of course I had to taste test them all.

I popped on over to my local IT'SUGAR shop to buy the most eye-catching Stranger Things treats they had to offer, and here are my honest opinions of all of them.

First up, I tried the compelling but slightly terrifying maple-flavored gummy waffle. It's made up of a big, extra-shiny gummy topped with a yellow pat of "melting butter" gummy, and I'd say it's larger than a typical Eggo waffle. 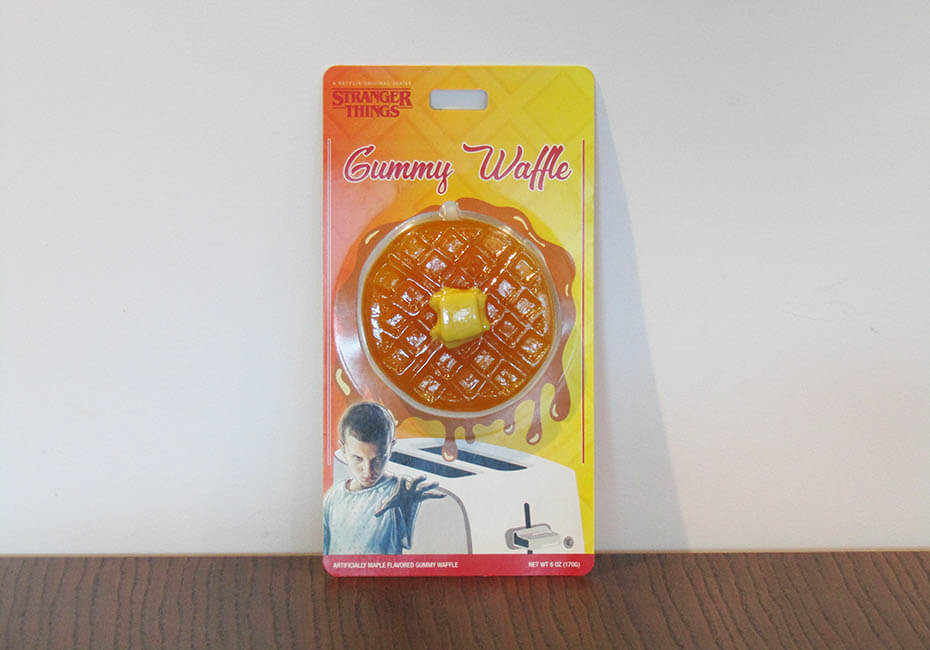 I'd never had a syrup-flavored gummy before, and I was nervous it would be as gross as it sounded. As I opened it up, I wasn't reassured by the powerful artificially syrupy smell. 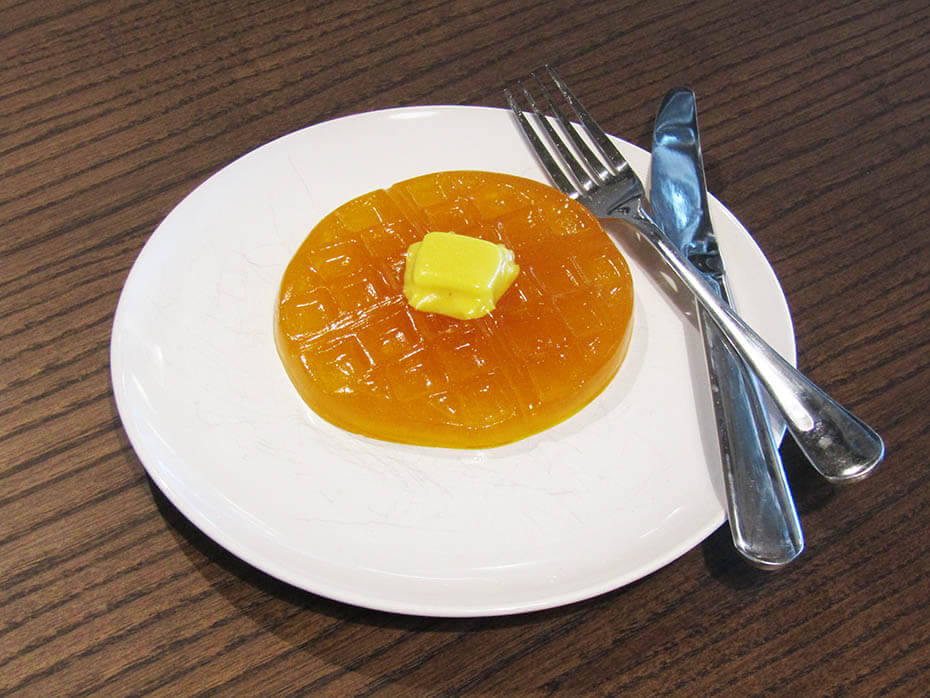 However, when I did cut it up into smaller pieces for more manageable consumption and took my first bite, I was very pleasantly surprised. Fortunately, the maple flavor wasn't immediately overpowering. While I chewed on it, it had a vaguely fruity taste, like a gummy bear, and only once I'd swallowed each bite did I catch a slight maple aftertaste. The opaque pat of butter had a lemony taste and a different texture from the rest of the waffle, and overall I enjoyed it a lot more than I anticipated. While it's a little pricey, I do think it's worth sharing at least once with fellow Stranger Things fans. 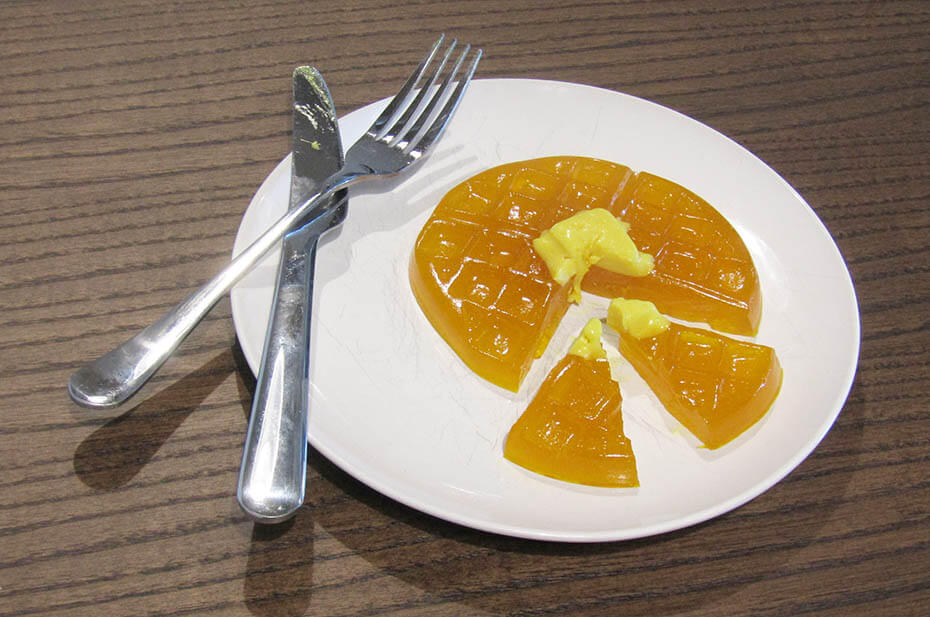 I was excited to try the fruity gummy letters because, though they're a great reflection of the show, the flavors themselves weren't going to be strange. The gummy letters in the box came inside a plastic wrap, and as I opened them up and got a vibrant, fruity whiff of them, the first thing I did was alphabetize them, of course. 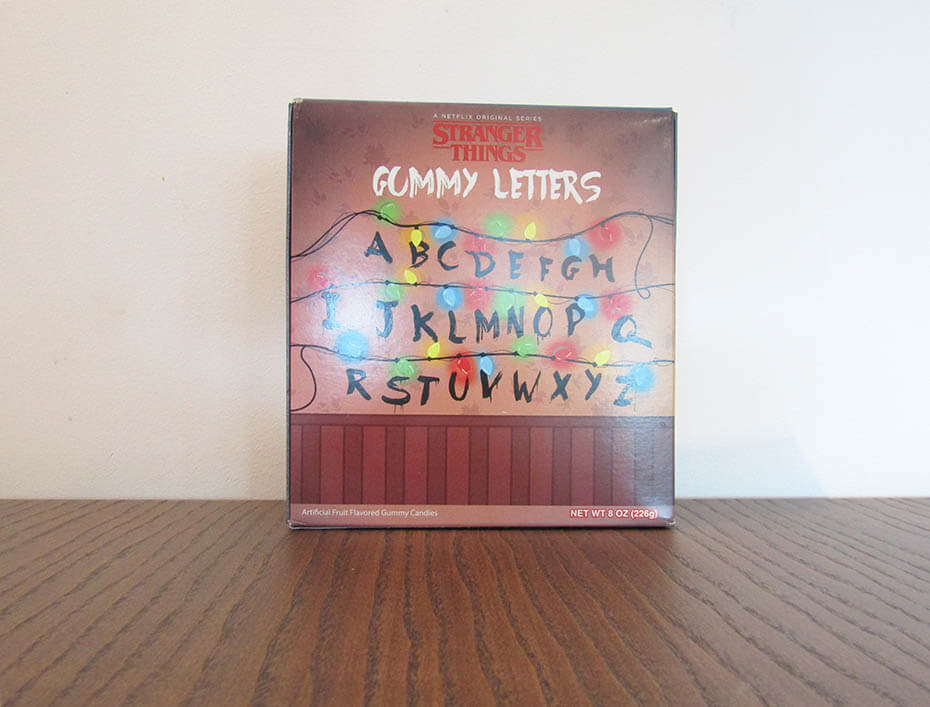 I had 47 letters total in my box coming in five different fruit colors and flavors. I was a little sad that I only had a single S, T and N in the box so I wouldn't have the letters to spell Stranger Things, and the letters C, J, L and X were missing entirely, but I still got a good mix of letters (though I still think three Qs was overkill). 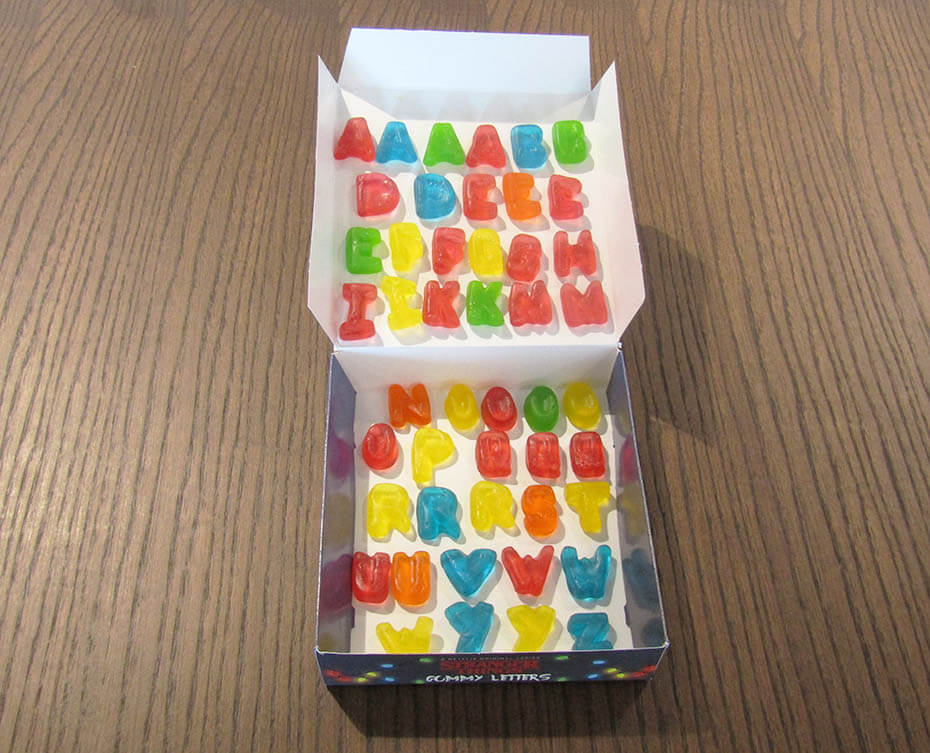 The flavors were great, too. The orange-flavored orange, apple-flavored green and strawberry-flavored red letters were all delicious, as were the unplaceable blue and yellows. Overall, the flavors were solid, and a purchase is warranted if you want to spell out gummy words for your friend.

Of the IT'SUGAR collaboration with Stranger Things, I think this one if the biggest stretch—though I'm still a big fan. It resembles a milk carton featuring a missing poster for Barb Holland and is chock full of malted milk balls. 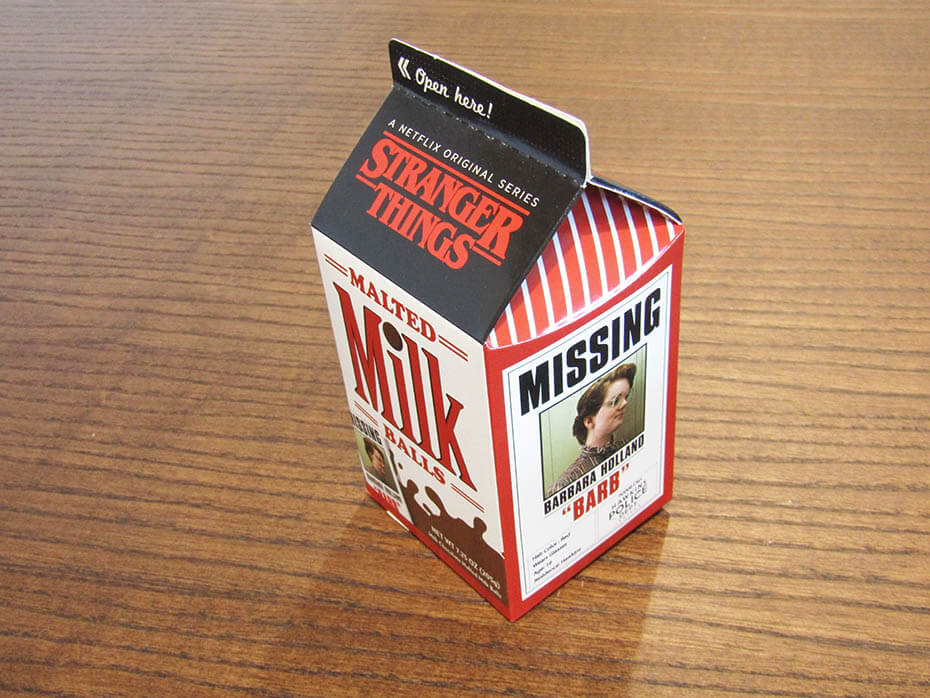 When I opened it up, I was a little surprised to see that the malted milk balls were contained within a plastic wrap inside the carton. I understand that it's there to keep them fresh, but it's not the best for maintaining the shape of the carton and pouring them out. I decided to go in with a pair of scissors to open a big enough hole in the plastic baggie for them to pour out as I expected. 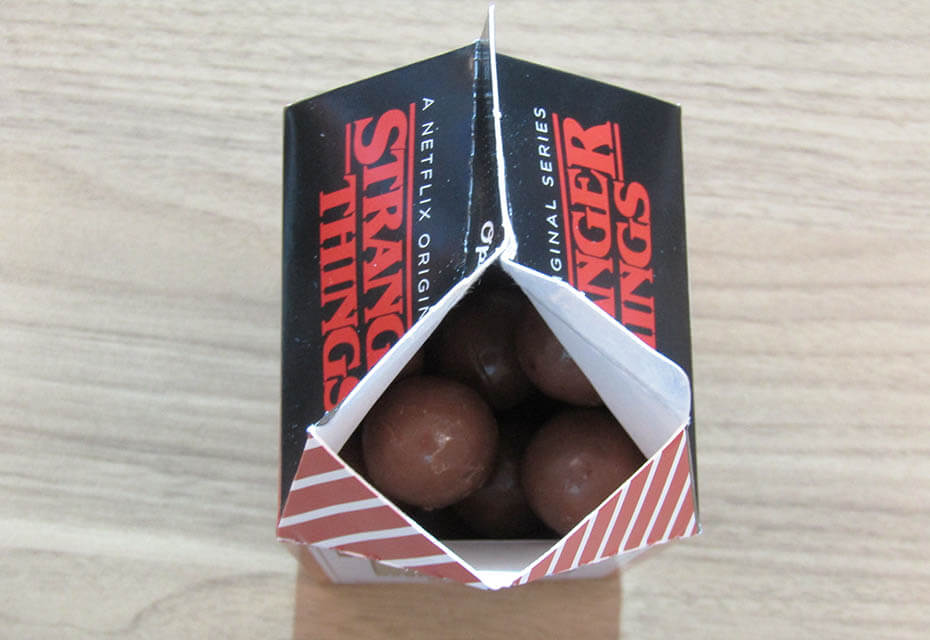 Flavor-wise, if you've had malted milk balls before, there are no surprises here. They're rich and sweet, and just the thing if you need a light chocolate fix. Again, it's a little pricey, but you may want to keep the collectible carton if you're all about justice for Barb. 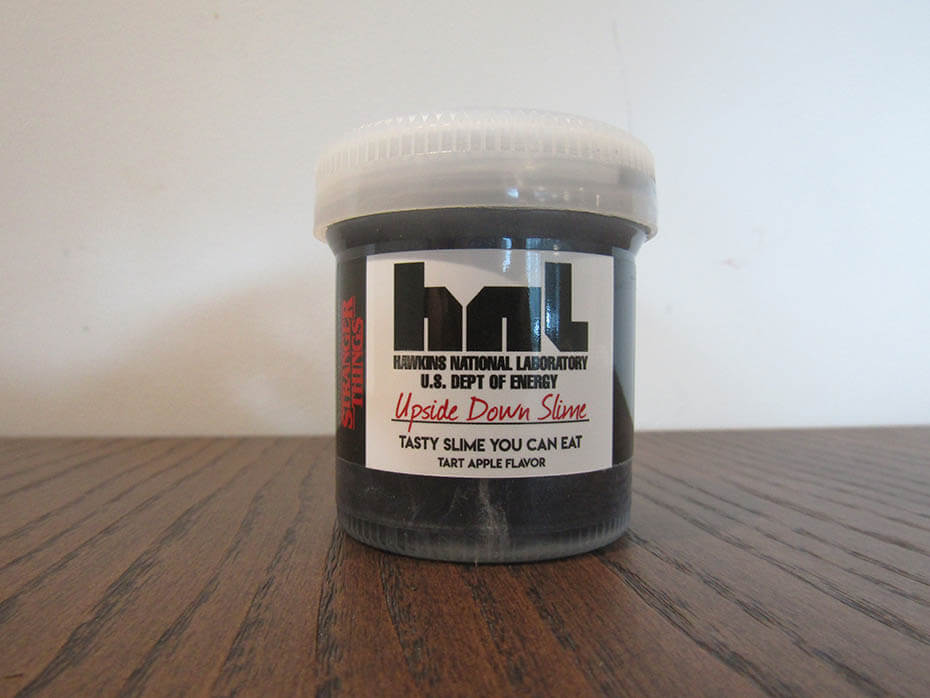 Lastly, I tried the Upside Down slime. When I peeled off the plastic wrap surrounding the container, I realized that some of the candy goo was already seeping out. I gave it a quick taste and was met with an extremely sour flavor with a hint of apple. My suspicions were confirmed when I saw that it was indeed "tart apple"-flavored.

When I unscrewed the lid, I was surprised by how pretty the slime was. It's a gorgeous black-grey color with a glittery, pearlescent sheen. It in no way looked edible, but I bravely dipped in a spoon and gave it another taste. This time, the apple flavor was stronger, but it remained just as mouth-puckeringly tart. I was a little surprised by how watery the slime was, as I was expecting a consistency closer to a moldable toy slime, though I do think it's smarter to not make it something you'll be tempted to play with in your hands.

Plus, when you're done with the container, you'll be left with a neat little Hawkins Lab-branded specimen cup for all your cosplay needs. Though you should be warned—this stuff is super sticky and will get stuck to your hands, no matter how careful you're being. 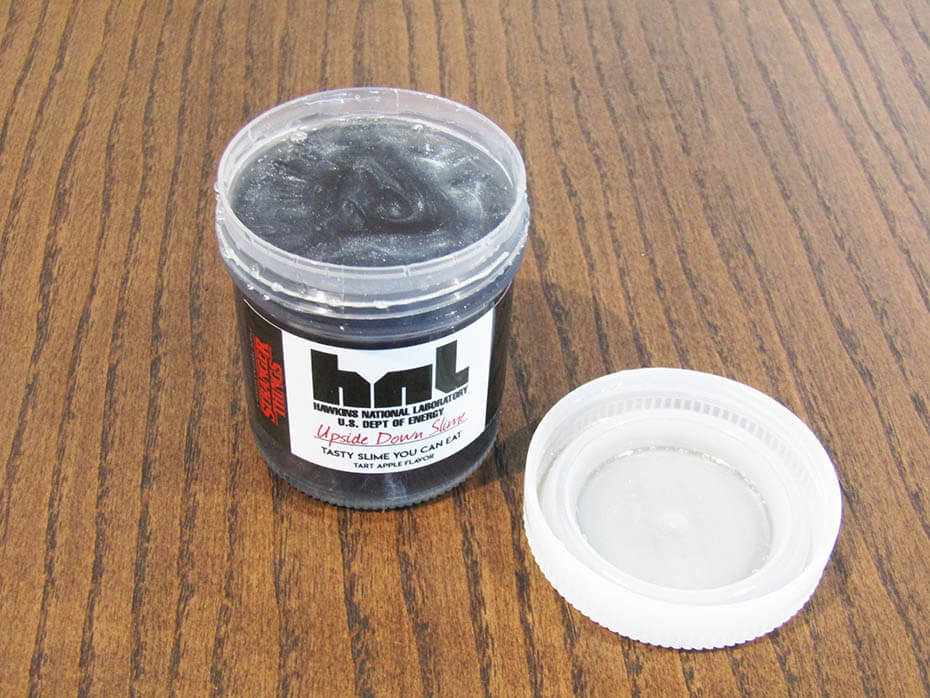 You can click HERE to find out if there's an IT'SUGAR location near you.

If you can't get enough of spooky treats, click HERE to check out the full Stranger Things-themed menu at Universal Studios this year.