16-year-old Jacquie Lee became a household name in 2013 when she was the runner-up on season 5 of NBC's The Voice. This summer, she's heading out on tour with other massive talents from The Voice! 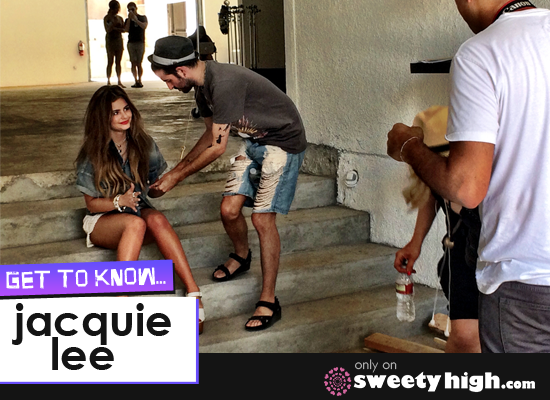 We recently spoke with the young singer about her musical journey, from singing at home to being broadcast on TVs across the nation and more!

Jacquie Lee got her musical start at the age of 7 when she tried out for a school play of Mulan.

"It was the first time I tried out for anything, and I got the role of Mulan, so that was pretty cool!" she said.

Once she took her place onstage, she found the experience exhilarating.

"I found that I really liked being onstage, and I wasn't nervous like I expected," she said. "It let me be a more confident version of myself, so I really enjoyed it."

Before that, Jacquie had always been incredibly shy.

"I used to sing in closets for my mom, and she would have to stand outside," Jacquie explained. "I overcame that through being on stage more, because it made me grow into into my own skin."

But that didn't mean that Jacquie didn't get nervous when it came impressing the judges on The Voice.

"I was extremely anxious to get on stage to audition for The Voice!" she said. "Not everyone auditioning even got the opportunity to go on that stage, so knowing that made me want to work harder and harder."

On the show, Jacquie passed the auditions and was mentored by Christina Aguilera. Jacquie said the experience was "indescribable."

"She's one of those iconic people whom I've looked up to since I was a little girl," Jacque said. "She's got the whole entire package. Her music is so soulful, and it really touched me at such a young age."

Jacquie added that it was like a dream come true to be mentored by someone she had always admired so much. Christina also taught her the importance of writing everything down!

Her original song "Broken Ones" was released in May

"The inspiration behind the song is that everyone is a little broken inside," she explained. "Rather than hide the flaws, we should learn to love them and love each other no mater how broken we all are. The biggest message I wanted to get across with 'Broken Ones' is that it's ok to be imperfect because it's in every one of us."

On June 21, Jacquie is also setting out on The Voice 2014 Tour! The tour will hit 31 cities, beginning in San Antonio, Texas and concluding in Redmond, Washington on August 2. Check out the full list of dates here!

"I'm super excited!" Jacquie said. "I get to be with a bunch of my friends – Dia Frampton, Will Champlin, Tessanne Chin (or Tess as I call her), and I'm definitely looking forward to hanging out with artists from Season 6!"

Listen to the beautiful Jacquie Lee track, "Broken Ones" embedded below, and be sure to follow Jacquie on her social pages! You can also join our community at SweetyHigh.com to share your own musical talents with us!