James Lopez is the animator behind the steampunk animation Hullabaloo, which was successfully 588 percent funded on IndieGoGo earlier this month! 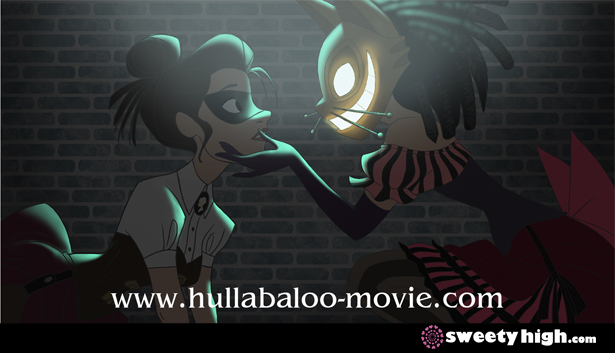 Yesterday, we shared an interview with Lopez in which he discussed all things Hullabaloo. Today, we reveal more about the man himself!

As a teenager, Lopez was inspired by Dragon's Lair and Space Ace, laser-disc video games by Don Bluth Studios. In contrast to other video games of the time, which featured characters and backgrounds composed of large pixels, these games were essentially animated cartoon adventures, with each next step scene unlocked by moving the controller in the correct direction. Every wrong move would trigger a losing cutscene and send the player back to the beginning of the segment.

Don Bluth, a former Disney animator, was the head of Don Bluth Studios.

"They were a group of animators who left the Disney studio in an effort to continue and advance the art form when it had become stagnant," Lopez said.

Lopez decided that he, too, wanted to be an animator.

"At the time, there was only really one school in the nation that had a program specifically geared towards character animation and that was the Character Animation Program at the California Institute of the Arts," Lopez said.

He applied to CalArts and was accepted. While there, he worked hard to learn to draw and animate, building up a resume that could appeal to recruiters.

Lopez considers himself lucky to have been able to work with a number of incredible mentors as he began his professional career. They included animators like Ken Duncan, animator on Jane in Tarzan, Bruce Smith, creator of The Proud Family, Mike Surrey, supervising animator on Timon from The Lion King and Chris Buck, co-director of Frozen.

"Glen Keane, that animator who brought Ariel the mermaid to life, taught me the importance of putting sincerity into an animated performance in order to make it special and connect with an audience," Lopez said. "All of them had high standards, were no-nonsense and were very fair."

Lopez went on to work on animation for films including The Lion King, Pocahontas, Hercules and more, but his latest work is a passion project called Hullabaloo, which is being entirely crowdfunded.

"At one time, I was denied certain opportunities," Lopez explained. "Rather than accepting the fate imposed upon me by others, I decided to make a future for myself and create my own opportunities. Life is a series of challenges. I've encountered many in my lifetime and many times I could have given up but I faced them with courage and I came out for the better."

Lopez's vision motivated him to launch a campaign to make Hullabaloo a reality, but he says he wouldn't have pursued the opportunity if he didn't believe in himself first.

"Had I not taken the chance, I wouldn't have been able to experience the joy that I am able to today and create opportunities for others to do the same," he said. "There are no guarantees in life but there is always hope. No matter who you are, keep dreaming, keep believing. You can do anything because anything can happen!"

Be sure to learn more about the film on their official website here, and check out our previous interview with James Lopez on the film here! Also join our community at Sweety High!