James Lopez is a veteran Disney animator whose latest project is the crowdfunded sci-fi animation adventure, Hullabaloo, which tells the story of an intelligent young scientist named Veronica Daring. 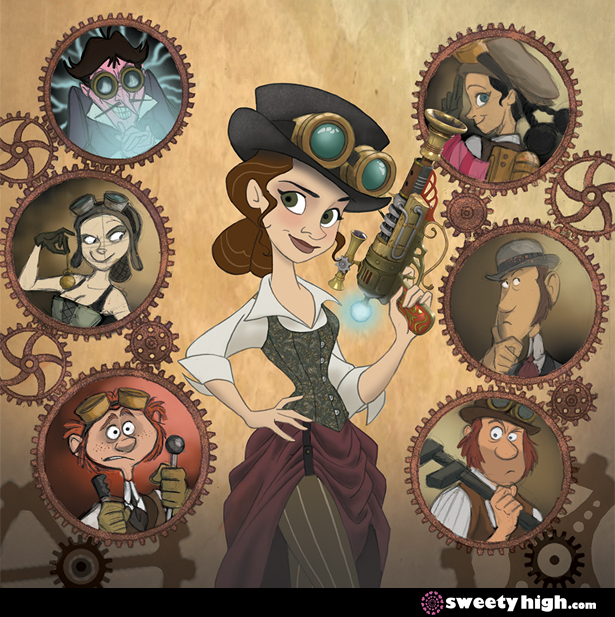 We spoke with Lopez to learn all about the incredible film, its team, and why 2D animation and girl power are central to Hullabaloo!

It began with Lopez's urge to tell a story that would be relevant to today's viewers.

"Technology plays a big part in our lives so I wanted to tell a story about a world that was on the shift of ever-changing technology and the pros and cons in adopting that newfound technology," he said. "But I didn't want it to be a heavy-handed social commentary. I wanted it to be light and fun."

His wife suggested that the film be made in the steampunk style to get that message across. Lopez had been a fan of the aesthetic since he first saw Disney's 20,000 Leagues Under the Sea and the TV series The Wild Wild West. Steampunk is a science fiction sub-genre that puts steam-powered machinery in a Victorian or Wild West setting.

If the enchanting nature of steampunk could come across in the animation, Lopez's wife explained, he would be creating something incredible.

Steampunk also worked well with Lopez's animation process. Just as the genre combines modern technology with a classic aesthetic, he wanted to bring it to life by mixing computer-generating imagery, or CGI, with hand-drawn animation.

The resulting idea was Hullaboloo, a story that features two strong women, Veronica Daring and Jules, as its protagonists.

"It started with the main character, Veronica," Lopez said. "Then I wanted to give her a close friend to be there in times of crisis and who would serve as a complement to one another to help each other along through their daily struggles."

Both characters were inspired by Lopez's daughters.

"My oldest is more reserved and inclined to stay inside and read or sew, whereas my youngest is prone to want to go outside and play and prides herself on being a 'big tough girl,'" he said. "That dynamic range in their relationship to one another is what I wanted to share with the world."

This led Lopez to create the characters Veronica and Jules, a play on the name of science fiction writer, Jules Verne.

Veronica's last name, Daring, was inspired by a book belonging to Lopez's daughter titled, The Daring Book for Girls.

But before he could bring these strong women to the screen, he first needed the proper resources.

"To do all that I wanted to do would require the help and resources of my close friends and fellow colleagues," he said. "Even though we shared the same drive and passion for what the project had to offer, I couldn't fairly ask of them to volunteer their time to dedicate to it. I felt the need to compensate them for their effort."

In crowdfunding, he saw an opportunity to create Hullabaloo while rewarding his crew for their efforts.

"I decided to turn to the people and share with them our collective dream in hopes that they too, would see the value in it enough to support it through donations," he said.

The campaign went up on IndieGoGo and was a smashing success. It far exceeded Lopez's expectations.

"I thought, at best, I would barely make my goal and maybe go a little past it," he said.

His campaign manager and producer, Evelyn Kriete, who had run a few successful campaigns in the past, had confidence in Hullabaloo, but even she was surprised at the passion of the campaign's supporters.

The Hullabaloo campaign wrapped up at the beginning of the month, raising $470k of its $80k goal.

"I think, in part, they just like the theme of the story and the aesthetic of the world that was created," Lopez said. "Besides that, I think it's also because people want to support the art of 2D animation."

Lopez has received emails from fans across the world, thanking him and the Hullabaloo team for striving to keep 2D animation alive.

"Art is a common language that unites the world," he explained. "2D animation is an art. To lose 2D would be like losing a language."

2D also serves to inspire, nurturing culture in the process.

"I was able to experience the joy of it because it was passed down from the generation before," he said. "I feel compelled to keep it in practice and pass it down so the next generation of artists so they, too, can continue to pass it on for future generations to enjoy."