Jaycie Gluck, aka Gillyweed, is one of the most popular commentators for the hit Blizzard Entertainment battle arena video game Heroes of the Storm.

She also plays a very important role in the new documentary A New Hero: The Rise of College eSports. It follows college teams in a Heroes of the Storm competition called Heroes of the Dorm as they fight for victory—and a massive college scholarship.

Jaycie's commentary has helped to bring the world of gaming competitions and eSports to the masses, and we got the opportunity to chat with her about her life as a commentator, the thrilling documentary and more. 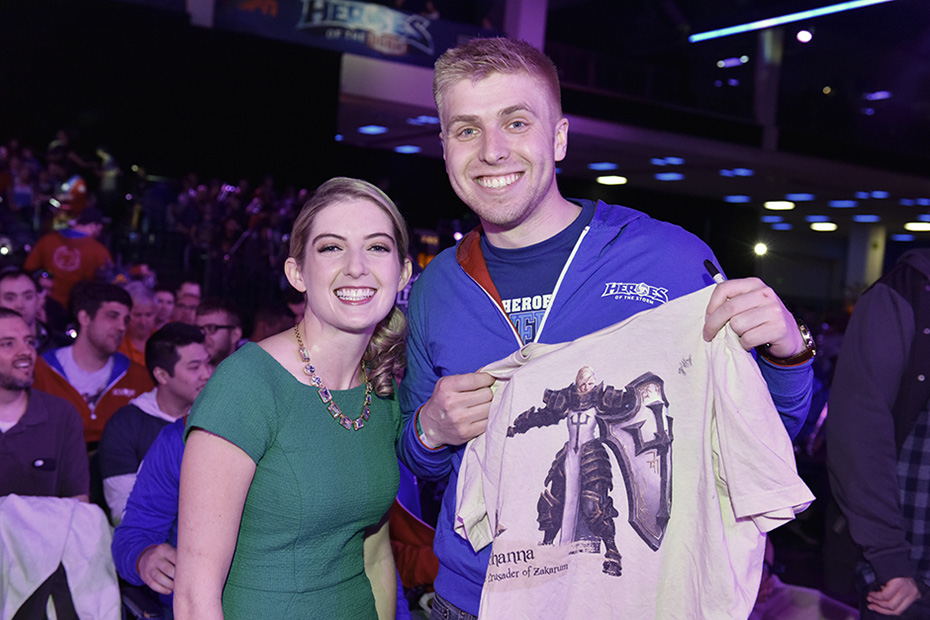 Sweety High: How did you get the nickname Gillyweed?

Jaycie Gluck: Gillyweed is a plant in the Harry Potter series, which I'm a huge fan of. It represents a relationship between Harry and [the house-elf] Dobby, which is one of my favorite parts of the series.

SH: When did you first become passionate about gaming?

JG: I've always enjoyed gaming. I was really little when my older brothers first got a Nintendo. I'd sit and watch them play, and sometimes join in, too. I started playing World of Warcraft toward the end of high school and became very involved in it, playing all throughout college. My entire life I've been gaming with friends and family and it was always a passion I wanted to pursue further. Being in eSports has allowed me to do that.

SH: When you were a kid, could you have ever imagined that eSports would exist?

JG: I had no idea. Even when I starting seeing gaming tournaments in high school I never knew it would be a huge industry that could provide real careers.

When I was growing up it wasn't really considered "normal" for girls to be playing video games. My family was always fine with me playing them but I don't know if they would have ever encouraged me to pursue them professionally. A career in gaming just wasn't an opportunity I considered as a girl. 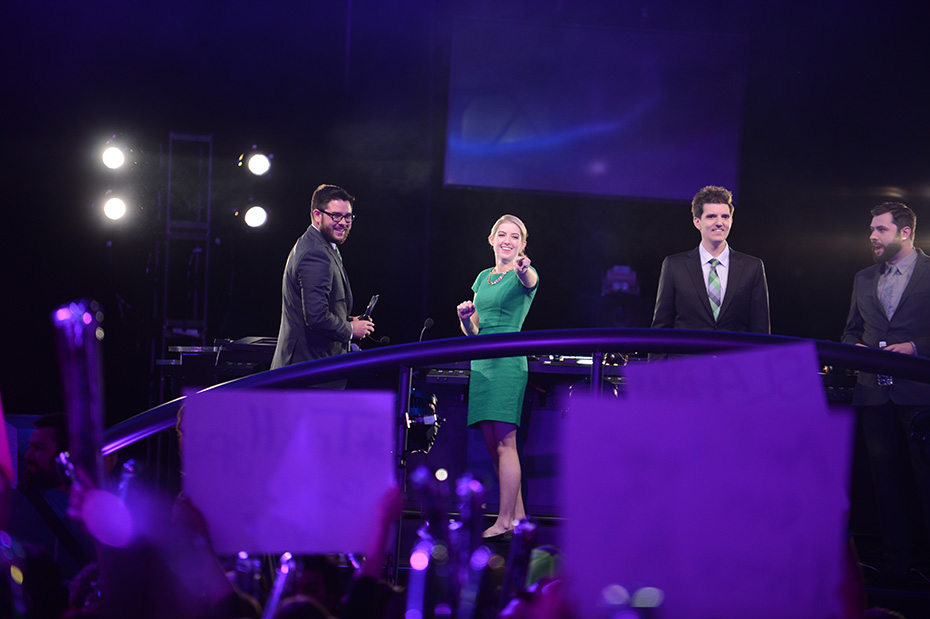 SH: How did you find your way into the world of eSports?

JG: I graduated with a degree in mass communications and fell into work as a web content developer when I met my boyfriend, now my husband. We were both casually playing Starcraft together, and he took me to a Starcraft tournament, really opening my eyes to eSports.

From there I started watching and studying Starcraft tournaments. Eventually got to thinking maybe my career wasn't truly fulfilling me. I left that job, and for a while I taught myself programming. I made quiz websites about learning Starcraft  for a while, but I really wanted to work more in eSports. I thought I'd like to be a personality, so I started making tutorials for Starcraft as well as my own YouTube series to get better at talking on-camera. I did that for a while before Heroes of the Storm came out. That's when I started commentating amateur tournaments, and that's how I got to where I am today.

SH: Your career in eSports really started with Starcraft. What about that game do you love most?

JG: Starcraft is such a difficult game and the people who win tournaments do so because they're insanely good. It's not a team game. If you're having a bad day, nobody can help you, and whether you win or lose comes down to just you. It's pretty unforgiving but when you watch the top-tier players, it's like art.

SH: Tell us about your experience commentating this year's Heroes of the Dorm event.

JG: It's incredible and unlike commentating any other eSports event. We started at the very beginning with the top 64 teams. They were brand-new players who weren't very well-known, so we would talk with them and get to build storylines for every team from the ground up. I still can't believe I got to be a part of it. 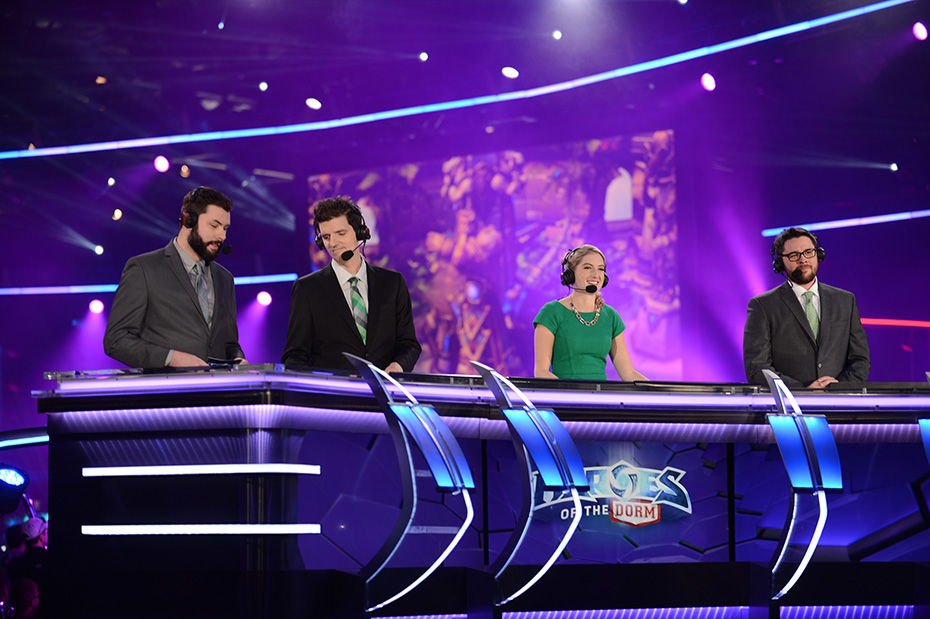 SH: What was it like to be part of the documentary?

JG: It was nerve-racking, and at first I was shaking knowing I was on ESPN and that the crowd was so huge, and it's strange but really cool to see that from the other side. The documentary is amazing because it bridges the gap between sports as we know it and eSports through collegiate rivalries. People who don't normally watch eSports are able to enjoy it because they understand what it's like to root for the schools you know and love. Getting to relive that experience watching the documentary was the biggest highlight for me.

SH: We also got to speak with your Misscliks colleague Anna Prosser Robinson. What has it been like to work with her and for that platform?

JG: Working with Anna is always a treat. She's an amazing personality and has been one of my role models since the beginning. She was working with her husband at that first Starcraft tournament I mentioned and it was very welcoming to see a female in that role. Her husband is my favorite commentator and I really look up to him. He's always in control.

When I started getting into Heroes of the Storm, Anna and I met and talked about how much we loved the game. She was also interested in doing commentary, so we decided to create a podcast together on the Misscliks channel as a study guide for learning how to commentate Heroes. Having a partner in that learning process is one of the reasons I've been able to get to this point.

Being a part of Misscliks has shaped how I view other eSports talents, especially women. I want to be very welcoming to them, particularly because there's a lot of inherent competition in this industry. Even though you're working with these people a lot, they're often vying for the same jobs you are. Missclik's main goal is to foster a supportive environment for everyone trying to make it in eSports. 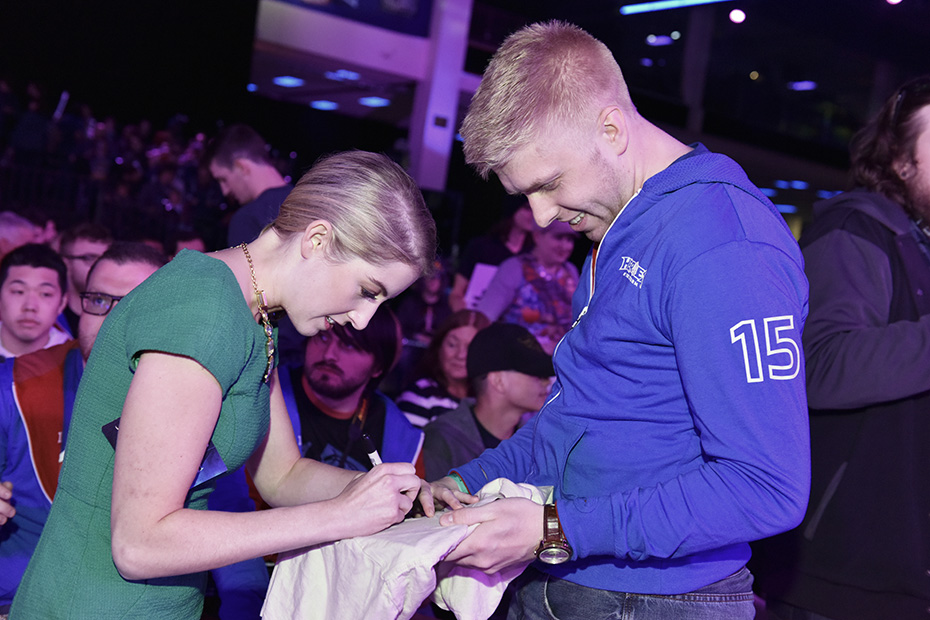 SH: What does it mean to you to be a role model for a lot of girls and young women in geek and gamer culture?

JG: It means a lot to be considered a role model. It doesn't even quite register with me because I'm just out there doing my job.

Once a guy sent me a tweet of his daughter pretending to be me. She had her headset on and she was looking super fierce. It made me cry, because it's not easy to be a commentator. It's a ton of work and it can be hard to be a woman in this industry and sometimes being the only woman at these events.

Getting those kinds of tweets and messages is one of the biggest reasons I've been able to keep doing what I do because I know I'm making a difference somewhere. If I help even one woman feel like she could also make it in commentating in eSports then I feel like I've accomplished something in my time as a commentator.

SH:  What advice do you have for girls who do what you want to do?

JG: First I want them to know that a job in eSports is a ton of work. Sometimes you have to start out with doing what you want to do on the side. I commentated for amateur tournaments, and commentated on games I played and put them on YouTube. It can be really scary not knowing where to even begin, but my advice is to just start doing it. Starting is the hardest part. From there, you'll figure out what works and what doesn't. Don't worry if everything isn't perfect right from the get-go.

Also, if your work is online, you need to know that not everyone is nice on the internet. The best advice I have is to devote the same amount of time to a comment as it took to write that comment. If someone comments "You're stupid," don't dwell on that. But if someone has taken the time to write out constructive feedback, they've spent time looking into how they can help you improve, and I give that a lot more thought.

You can see Jaycie Gluck at Heroes of the Dorm in the full A New Hero documentary below!

For even more on Gillyweed, click HERE to see what Anna Prosser Robinson had to say about her!