I've tasted a lot of chocolate in my time, but I never once considered that I wasn't getting the full chocolate experience.

That's right—chocolate isn't just about taste. In fact, when it comes to getting the most out of cacao, everything from smell and texture to sight and even sound can be critical parts of fully enjoying chocolate.

And the folks at jcoco chocolate are trying to spread the word. The brand recently launched a new line of incredible chocolates made with real Peruvian cacao, and they invited me to a virtual tasting to learn more about the chocolates and learn how to really experience chocolate. I discovered so much, and here's everything you should know.

jcoco chocolate is a relatively new chocolate brand under the Seattle Chocolate umbrella with a fabulous new collection of Peruvian origin chocolate bars. They're all designed to honor the innate complexity of chocolate, adding unique flavors and combining them with different levels of cacao to bring out the very best tastes possible.

jcoco's cacao is sourced from high altitudes in Peru, which makes sense, given that the bean is actually indigenous to the region. They also support the chocolate ecosystem. Their chocolate is made in collaboration with a world-renowned chocolate maker in Lima, Peru, with local chocolate. They also pay farmers 50% more than what they'd get from industrial chocolate companies. The brand wants to start a chocolate renaissance, making the highest quality chocolate while better supporting the farmers behind it.

With every purchase, the company also donates money to food banks across the U.S., so that people everywhere can have access to fresh food. After all, their motto is "chocolate that feeds"—not just because chocolate is food itself, but because supporting chocolate farmers also feeds them, as well as the brand feeding those who benefit from their donations.

jcoco also wants consumers to understand all of the work that goes into their chocolates. The wrapper of each one comes with details on where the beans are from and explains how everything from the environment to the fermentation and roasting processes gives a unique flavor quality to chocolate, just as they might with a cup of coffee.

And while you might not have as personalized of an experience as I had with it, you can try something similar with the jcoco Tasting Experience Box. It features three 1 oz. bars of five rich Peruvian chocolates, complete with tips on tasting, for $65. All bar flavors are individually available for $3.50 for a 1 oz. bar, or $10.50 for 3 oz. 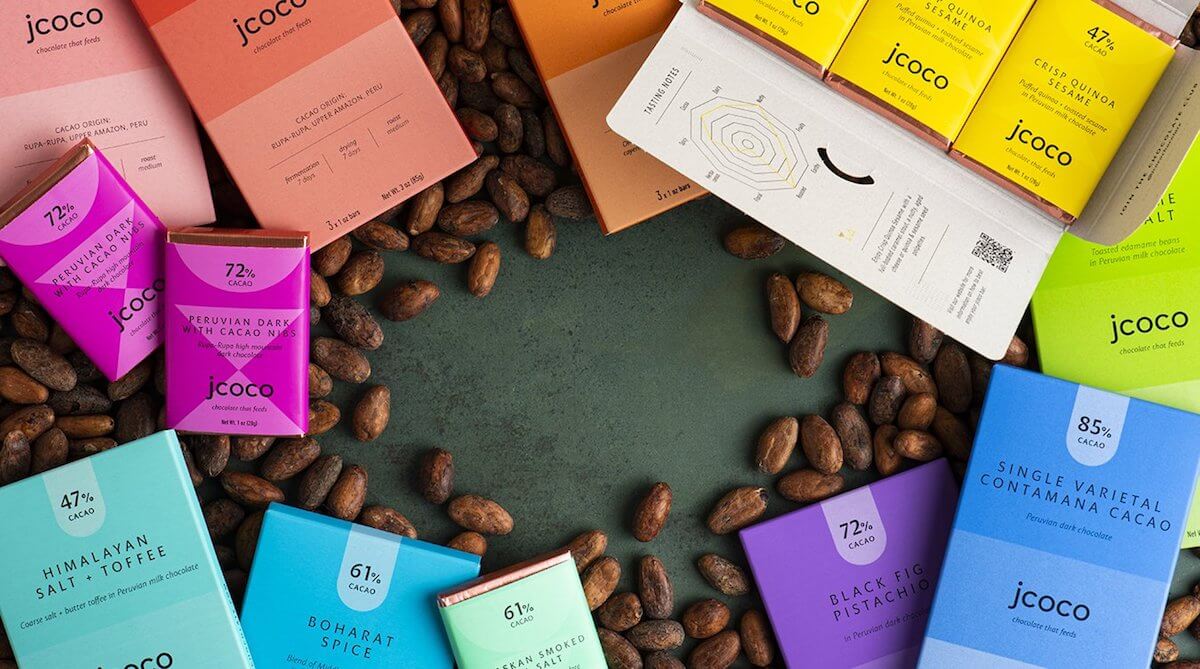 For my virtual tasting experience held over Zoom, I was joined by many other tasters and representatives for the brand, including Jean Thompson, the CEO and owner of Seattle Chocolate Company and jcoco. They sent me a nice box full of 11 different flavors of jcoco chocolate—but that wasn't all. I was also provided with a stack of sheets for the tasting, where I could mark the different qualities of the chocolate, from cocoa to dairy, nutty to fruity, and earthy, roasted, floral, herbaceous and spicy.

I was also asked to have a cup of room temperature drinking water available nearby as a palate cleanser between chocolates, allowing each nuanced flavor to shine through, in addition to receiving a card on how to taste chocolate—though, for this, I mostly followed the steps provided in the tasting. This also came with a chocolate-tasting wheel to help me describe what I was tasting. Not only are all of the flavors above described, but each category is further broken down. Is an earthy note more wood, musty, soil or tobacco? Is a cocoa flavor mostly tannic, astringent, alkaline or acidic?  With all of these options in mind, I couldn't wait to start tasting.

The taste test experience started with their Single Varietal Contamana Cacao, considered the "crown jewel" of the jcoco line. This vegan, 85% cacao bar is made from a single varietal bean, which is very rare in chocolate since it can only be harvested during certain months of the year.

I was asked to open the chocolate and take in its smell, which was rich with a slightly fruity essence to it. The color was very dark, and segmented into six breakable squares. It had a lovely snap when I broke it apart, which is apparently a sign of well-tempered chocolate.

They then told me to hold my nose as I first put the chocolate on my tongue, in order to separate the scent from the taste and see just how important smell is to taste. Its silky texture immediately began to melt on my tongue, and at first, I mostly tasted the sweet yet slightly bitter chocolate. When I finally opened up my nose, I could taste all of the rich notes, with berry and cherry-like fruitiness and earthiness joining the fray. It wasn't the first time I'd tried fruity dark chocolate, but it might have been the best I've had of this style. It's a tiny bit bitter but never overpowering and made me very excited to see what the other flavors might have in store for me. 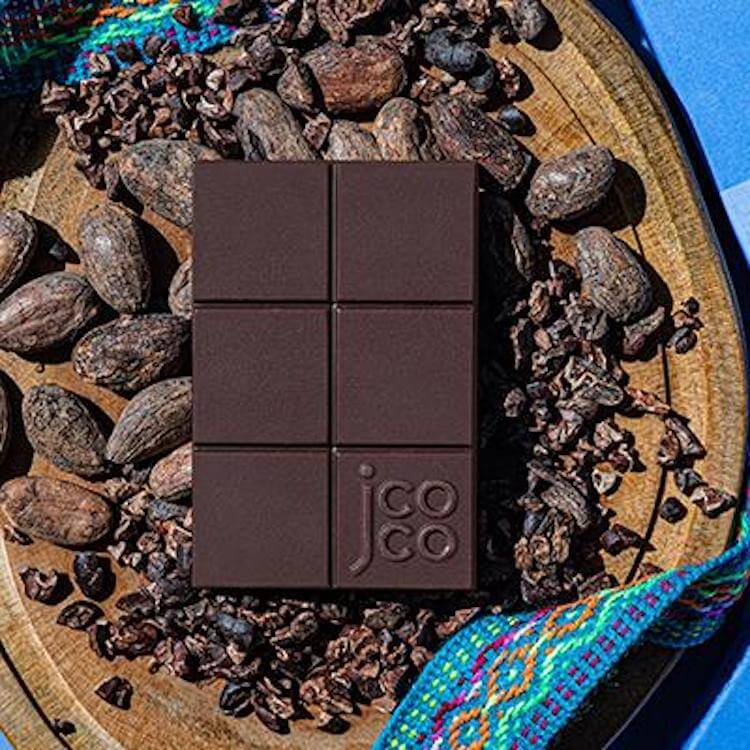 I took a sip of the water to cleanse my palate and then moved on to the Peruvian Dark With Cacao Nibs. This 72% bar is made with nibs from the same cacao it's made from. It looked just as dark and smooth as the bar that had come before it, but this one's cacao nibs added some almond-like nuttiness to the blend, which had a fruity and almost tropical taste. It was surprisingly sweet, despite the deep cacao notes, with a satisfying crunch that made it very easy to nibble. 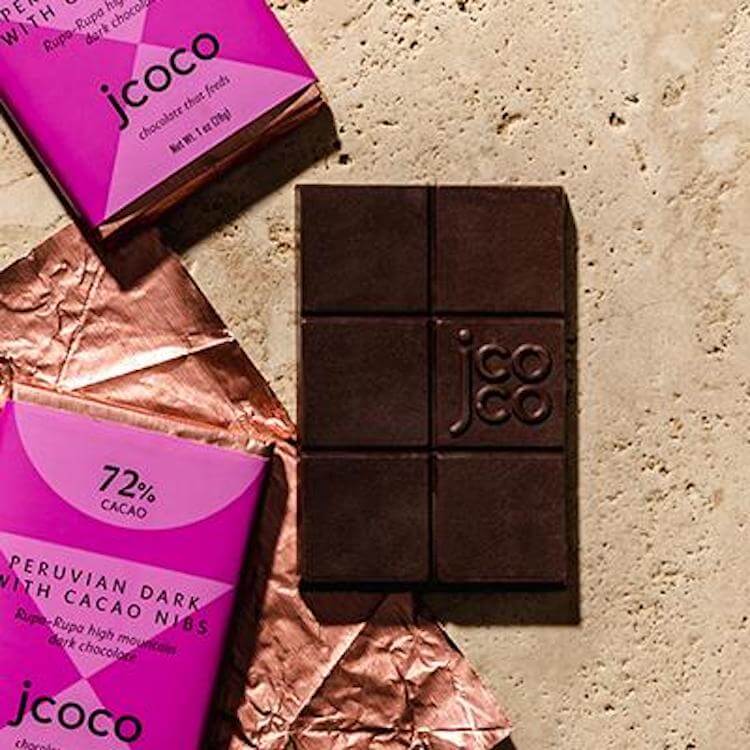 Next up was the 72% cacao Black Fig Pistachio bar. I was slightly hesitant about this chocolate because I'm neither a fan of the crunchy seed texture or the chewy fruit flavor of fig, but the bar itself was a pleasant surprise. The pistachio had a nice blend of crunch and salt, and the fig seemed mostly to accent cherry notes without too many crunchy seeds getting in the way of my enjoyment. The flavors seemed very purposefully chosen, and I loved it a lot more than I'd expected. 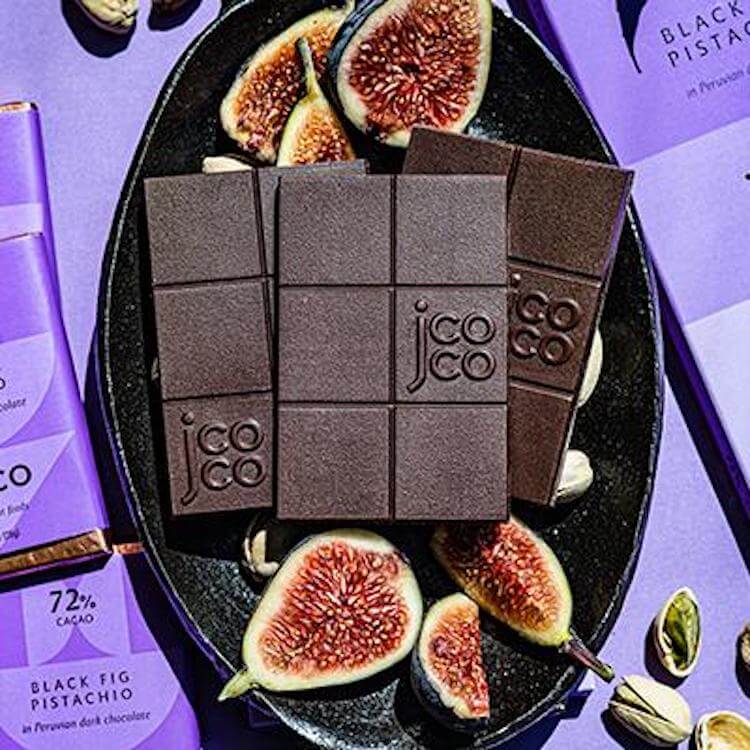 Now, here was one that I knew I'd love from the moment I saw the wrapper. The brand considers this 47% cacao bar dark milk chocolate because it has nearly enough cacao to qualify as a dark, giving it a creamy milk chocolate flavor with the benefits of dark chocolate.

It's an elegant take on salted caramel, with bits of crunchy English-style toffee crunch throughout and accented by tasty salt. There was less fruitiness to this one than the others I'd tried before, but that wasn't a problem at all, and this was the first bar to get completely devoured in my household. 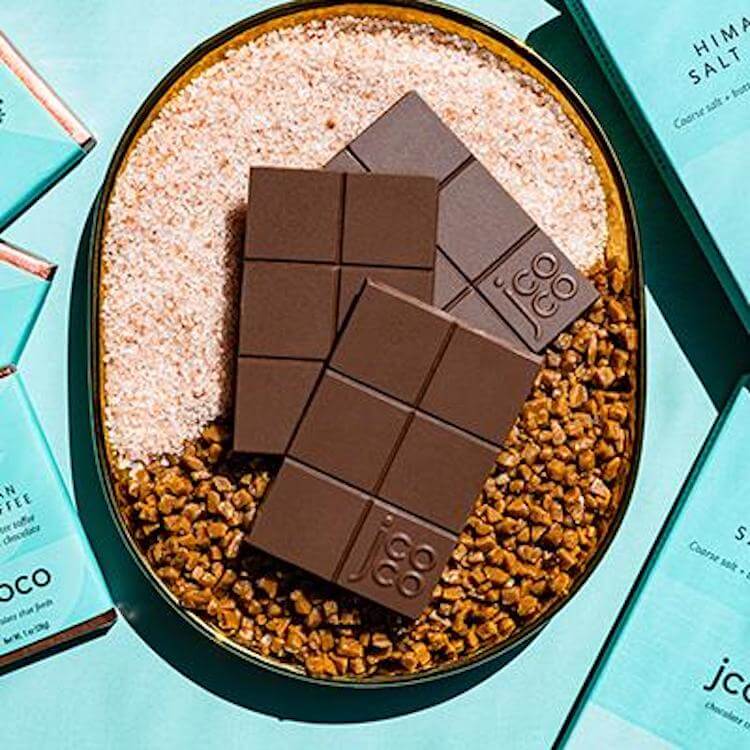 The only white chocolate in the jcoco line may also be my favorite of the bunch—and I'm not usually a white chocolate-lover! This one's just 30% cacao, but it's buttery and rich and really allows the added flavors to shine. It tastes of vanilla combined with bright orange peel and is backed with a peppery cayenne kick that lingers in the back of the throat and builds with each bite. It was another hit at home—and it's one we'll probably have to order more of, stat. 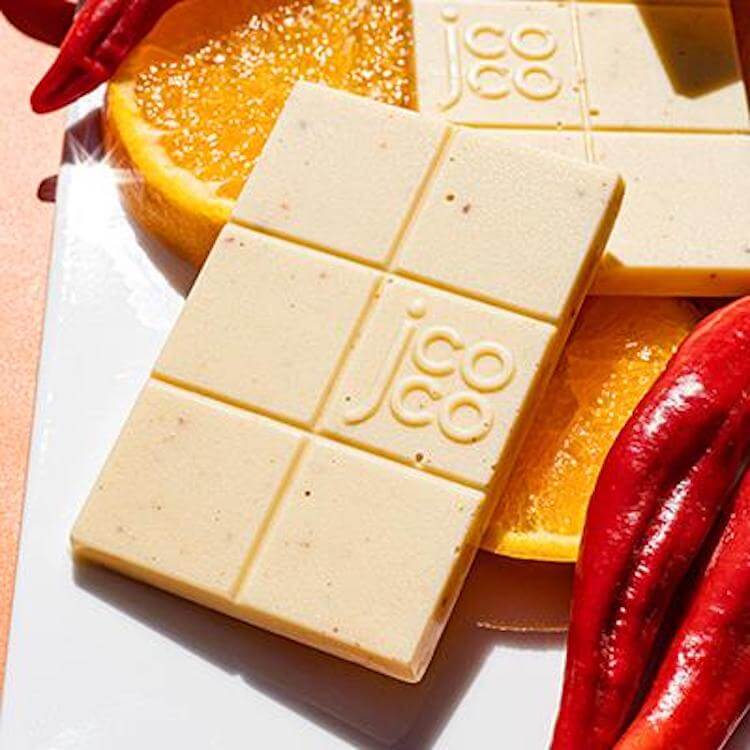 The Crisp Quinoa Sesame is something a little different, almost like a high-end take on a Crunch Bar, blending 47% cacao dark milk chocolate with crispy bites of both puffed quinoa and toasted sesame to imbue it with a crisp, gorgeous texture and loads of nutty flavor. It's also complemented with salt to bring out the best in all of the flavors, making it almost a savory experience with a tahini finish. 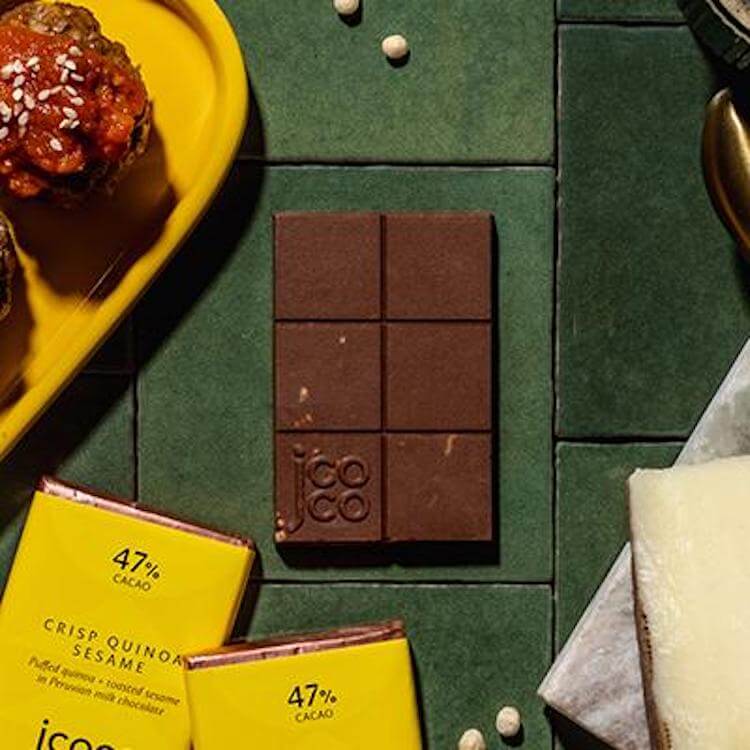 From here, I was left to my own devices to try out the rest of the flavors. The Edamame Sea Salt was yet another bar of the 47% dark milk chocolate, and though I thought it was a little weird to put edamame in chocolate, the pairing just works. First, you've got the nutty, earthy taste of the soybean (embedded whole within the bar), and it's complemented strangely well by the slightly salty, slightly sweet taste of the soy sauce in the chocolate itself. It's unusual, but definitely one I wouldn't mind trying again. 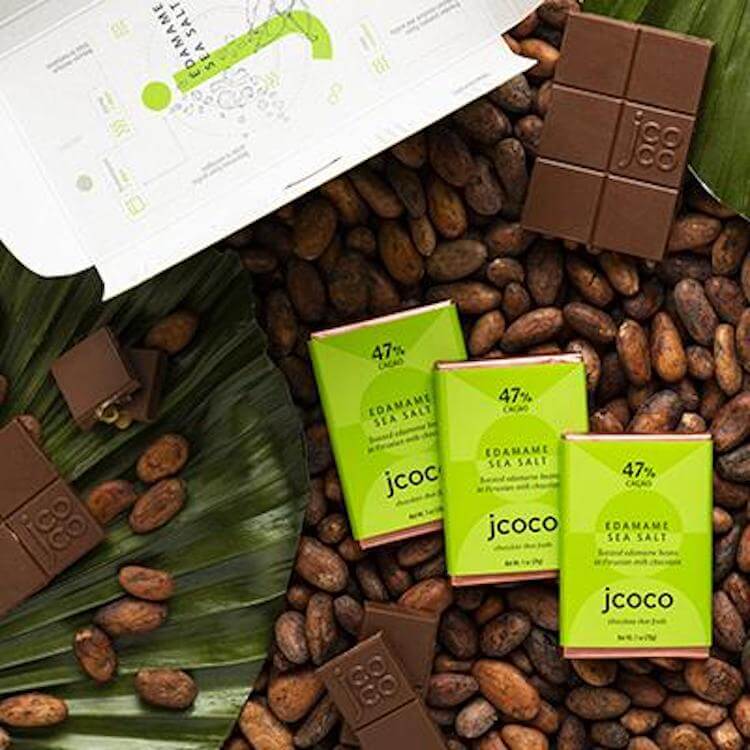 While all of the separate parts of this 61% cacao chocolate bar sound great on their own, they don't quite work for me when they're all blended together like this. I'm hit immediately with the orangey citrus taste upfront before the bitter, rich coffee hits. For me, the sweetness, sourness and bitterness don't taste quite right to my tongue and would have been better separate. The gritty texture of the beans also isn't my favorite—but that might just be me! 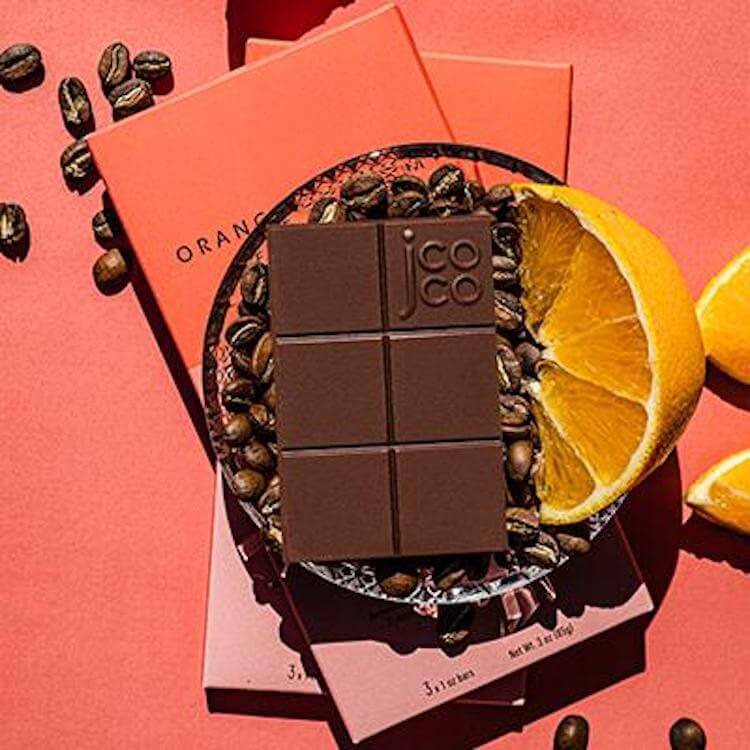 I'm a big fan of mango as well as plantains, so I was very curious to see what this 47% cacao chocolate would have in store for me. From the moment I bit in, getting the chewy, sweet mango pieces as well as the crunchy, banana-like plantain chunks in the first bite, I knew I was a fan. These tropical flavors complement the chocolate beautifully, and the fact that it's all backed with a little bit of smokey chili spice makes them even better. I'm all about spiced mangos, and this chocolate is a dream. 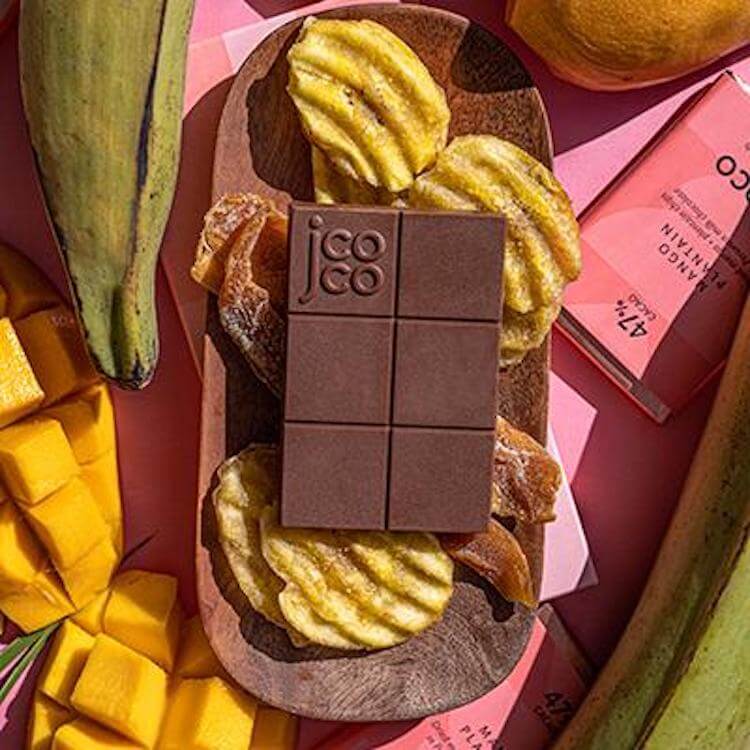 This Alaskan Smoked Sea Salt chocolate is 61% cacao, and while it's one of the simpler flavors in the collection, it's also one of my favorites. It's all about the dark chocolate, with all of the cherry and astringent notes accented by strong, smokey salt. If you like classic dark chocolate, I think you're really going to like this bar. 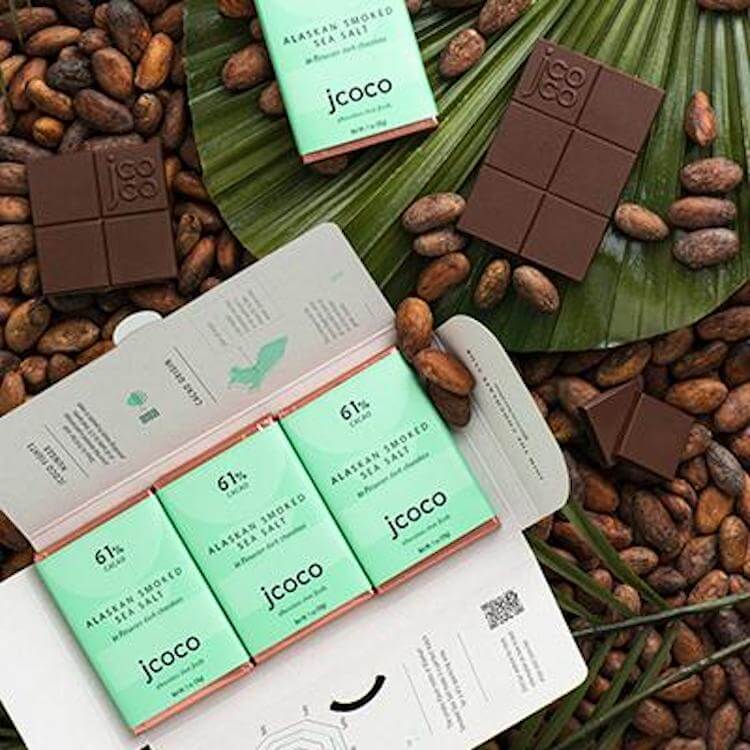 And last, but definitely not least, was the Baharat Spice bar, made with 61% cacao. I've had spiced chocolate bars in the past, but never quite like this one. While many people spice chocolate with cinnamon and nutmeg to make it something like a cup of chai, these spices are more like what you'd find in a meat dish. The blend of chocolate really allows the spices of cinnamon, cumin and curry to shine, making this another unusual but highly worthy chocolate bar. 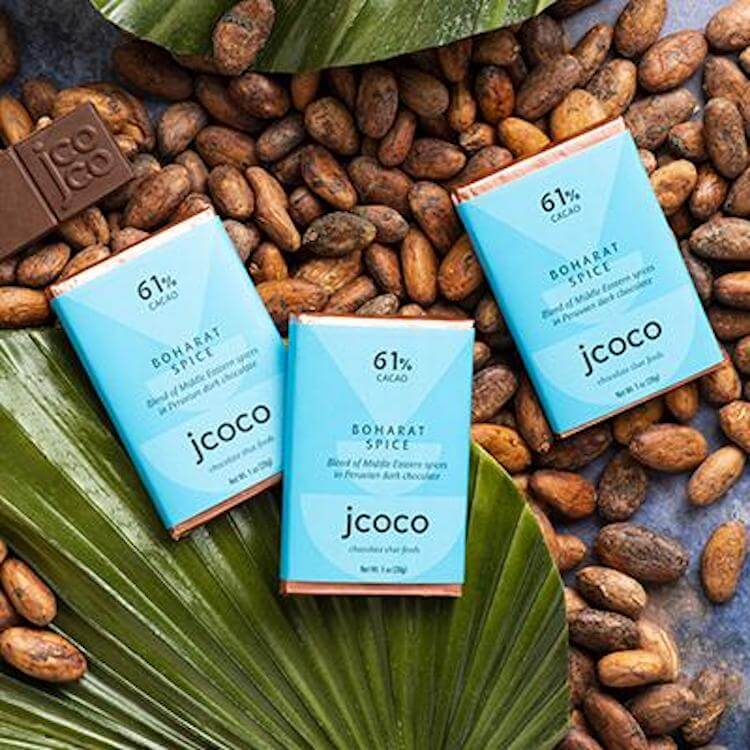 If you're a dark chocolate fan, you won't know what you've been missing until you try jcoco chocolates. Not only are these high-quality chocolates that give back to the community, but they have flavors unlike anything you've had before—and the team provides you with all of the tools you need to enjoy them as they deserve to be enjoyed. Of course, for premium chocolates like this, you also have to pay slightly premium prices, but I believe they're fully worth the investment.