We've been eagerly anticipating the release of Peacock's The Housewives of the North Pole, starring Kyle Richards and Betsy Brandt, and today, Dec. 9, it's finally here.

The movie is about two best friends who've teamed up every holiday for the last decade for the town's annual holiday home decorating contest. Only this year, the two have a massive argument, leading to them competing against each other, with hilarious results. In the film, actress Jearnest Corchado plays Skye, the daughter of Kyle Richards' character, who's home during the holiday break. Skye has always struggled to be perfect for her demanding mother—but this year, the heightening pressure at home might finally make her crack.

We got the chance to chat with Jearnest all about the new role, what it was like to work with the incredible cast and her own advice for dealing with helicopter parents. Keep reading to find out what she had to say.

Sweety High: When did you first discover your love for acting?

Jearnest Corchado: I think I was probably 7. It was the first time I saw kids acting on Mexican novelas and I had the realization that kids could become actors.

But ever since I could walk, I would dance and perform in front of my mom and grandparents. My grandpa always jokes around and says he was my first fan. I was always really passionate.

SH: Between being an actress, musician and artist, is there any one role you're most passionate about?

JC: My first love was acting, and it still is. It feels very natural to me. But it's hard to say. I'm very passionate about creating in general. I love the process of turning a tiny idea into something bigger. Right now, I'm really enjoying music, though. I've written songs ever since I was a kid, but I'm finally recording them and it's a crazy feeling to have your emotions turn into a song—to share it with others feels liberating. I also think it's cool people get to know me by listening to them.

SH: Tell us a little bit about The Housewives of the North Pole. What's the premise, and what's your role in the film?

JC: Two neighbors and best friends have a huge fight right around Christmas and decide to compete against each other for best holiday house. My character, Skye, is Trish (Kyle Richards)'s daughter—a very controlling mother who wants to pressure Skye into law school even though Skye wants something different for herself. Skye is trying to figure out who she wants to be aside from what her mom has decided for her. She is someone sweet, a peacemaker, someone who you want to have around 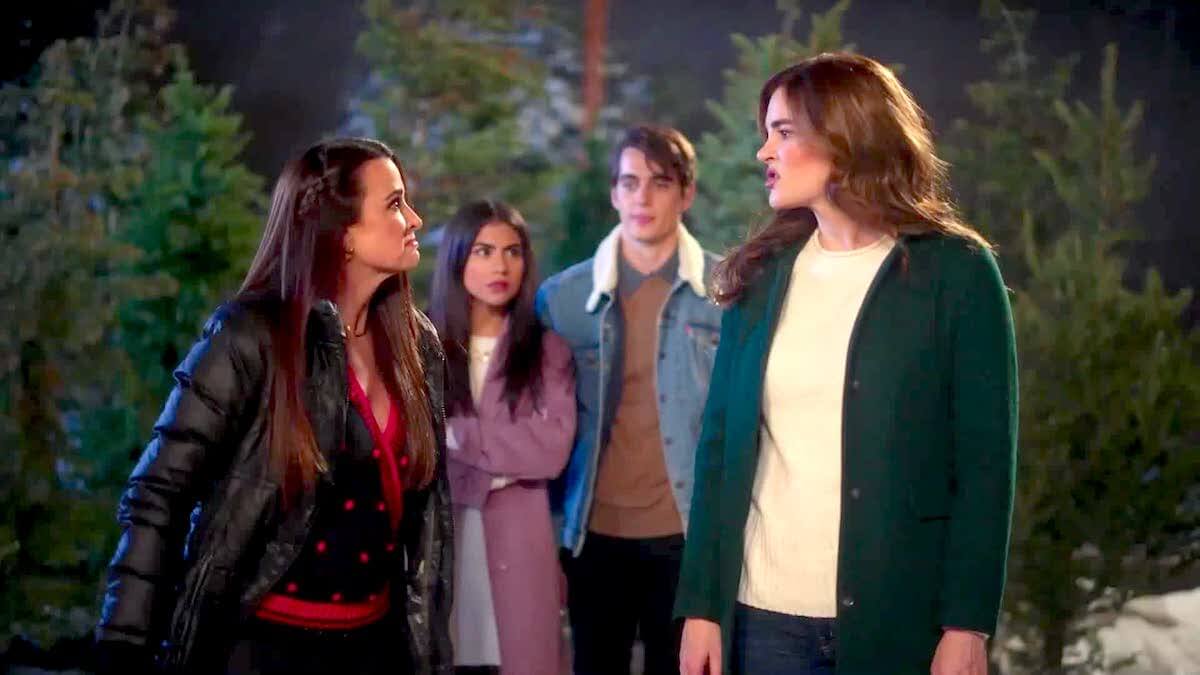 (The Housewives of the North Pole via Peacock)

JC: Skye can be a bit of a perfectionist and a Type A. I always thought of myself as someone quite "chill," but after playing Skye, I realized I was a bit of a perfectionist myself. We want to be our best selves. We don't like confrontation, either. We tend to be peacemakers. I can't think of many things that make us that different, other than the way we dress and that she is a Type A and I'm the complete opposite. As much as I love her and her outfits, I think I am a little bit more relaxed and less conservative than she is.

SH: Do you have any advice for anyone who's dealing with a helicopter parent?

JC: Be kind and understand where they may be coming from, but at the end of the day, listen to your intuition. Follow your dreams. You can't live your life pleasing others. You need to do what makes you happy.

JC: That's so hard! I had so much fun working on this film. There's something truly magical about working on a Christmas film. I think the best part was celebrating Christmas in July! Seeing the crew turn a summer lawn into a winter paradise was pretty cool. And definitely working with my costars. Kyle Richards as my mom was hilarious. I think people will have a good laugh seeing her as my helicopter mom.

SH: Do you have a favorite family holiday tradition?

JC: Skiing! I love to ski. Every holiday we go skiing and spend a lot of time together.

SH: What makes you most excited for fans to be able to see the film on Dec. 9?

JC: I'm so excited for fans to get to know these characters. People will love love love the film. It's funny, real!, relatable, heartwarming and so much more. I think people will fall in love with The Housewives of the North Pole!

Are you holiday movie-obsessed? Click HERE to read our interview with Ella and Mia Allan on their role in A Loud House Christmas.