Accessorizing is all about making a statement.

If you're looking to make the boldest statement of them all with your jewelry, look no further than the necklaces, rings, earrings, bracelets and brooches handcrafted by Spain-based jewelry company La Vidriola.

Designers and co-founders Blanca Calabuig and Pablo Nieto create the most whimsical designs you've ever seen, which are inspired by the world around them.

We chatted with the duo to learn how they continuously come up with their eccentric pieces, the designers they'd love to work with in the future and the one creation that holds a special place in their hearts. Keep scrolling to see what they had to say!

Sweety High: What inspired you to create your jewelry? Was this always something you thought you'd end up doing?

Blanca Calabuig & Pablo Nieto: We didn't plan for it to happen at all. It started as a hobby. It was a way to design our own products fully created by ourselves. The only thing we were sure of at first was we knew we wanted to do something different.

We never thought we could make a living out of this, so being able to do what we love as our job is very satisfying. Sometimes we can't believe that something that started as an experiment has come this far. 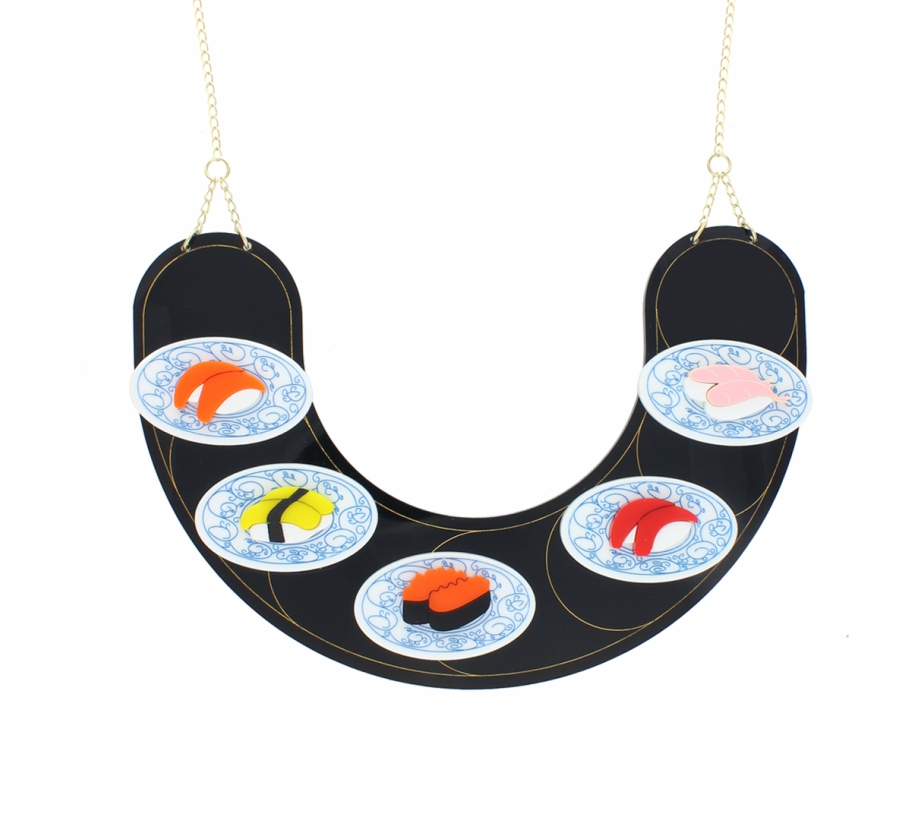 SH: Are there any jewelry designers you look up to or would love to work with someday?

BC & PN: One of the designers who stands out from a very unconventional style and we like a lot is Andres Gallardo, who combines ceramics and leather for his bright necklaces.

As for designers who work with acrylic, we love Baccurelli's work. She's a woman who designs little dolls inspired by famous characters and movie icons. We would love to do a crossover with her one day. It would be such fun. 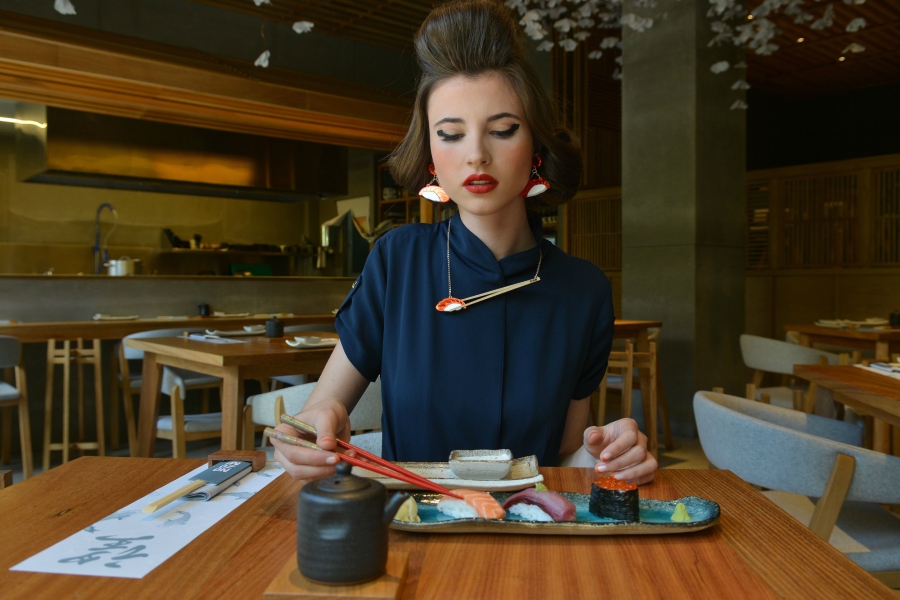 SH: How do you come up with all the different design ideas?

BC & PN: We normally get inspired by our life experiences, things that have happened to us in our childhood, during trips or just things we like. For example, in the Hula Hoop Collection, we were inspired by the '80s and '90s. In our Takeaway Collection, we captured our passion for sushi, which we love to prepare and enjoy, in different tasty pieces.

Last but not least, a few months before starting to design our collection The Kingdom, we visited the Alcazar in Seville, Spain, where some scenes from Game of Thrones were filmed. There we saw an impressive peacock, which we captured on our Peacock necklace. This trip helped us not only represent this world of knights and swords, but also recreate a world of fantasy, princesses and beautiful gardens. 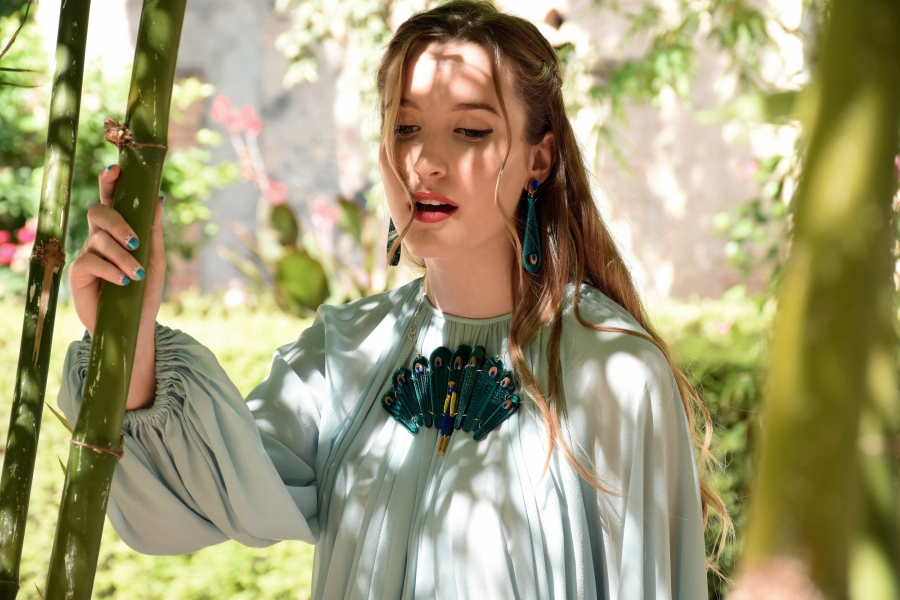 SH: What's been your favorite piece of jewelry you've created so far?

BC & PN: It's very hard to pick just one. Knights Duel Necklace is one of our favorites, as it is a very elaborate design full of details. We would also [select] the Happy Jester necklace, which is a piece you can rearrange in the position you prefer. This allows the customer to vary its shape and turn it into a fun game. It's as if you could wear a different necklace everyday just by changing the position of the chains. We love designing necklaces that become a game and we would love to design more pieces as fun as this one. 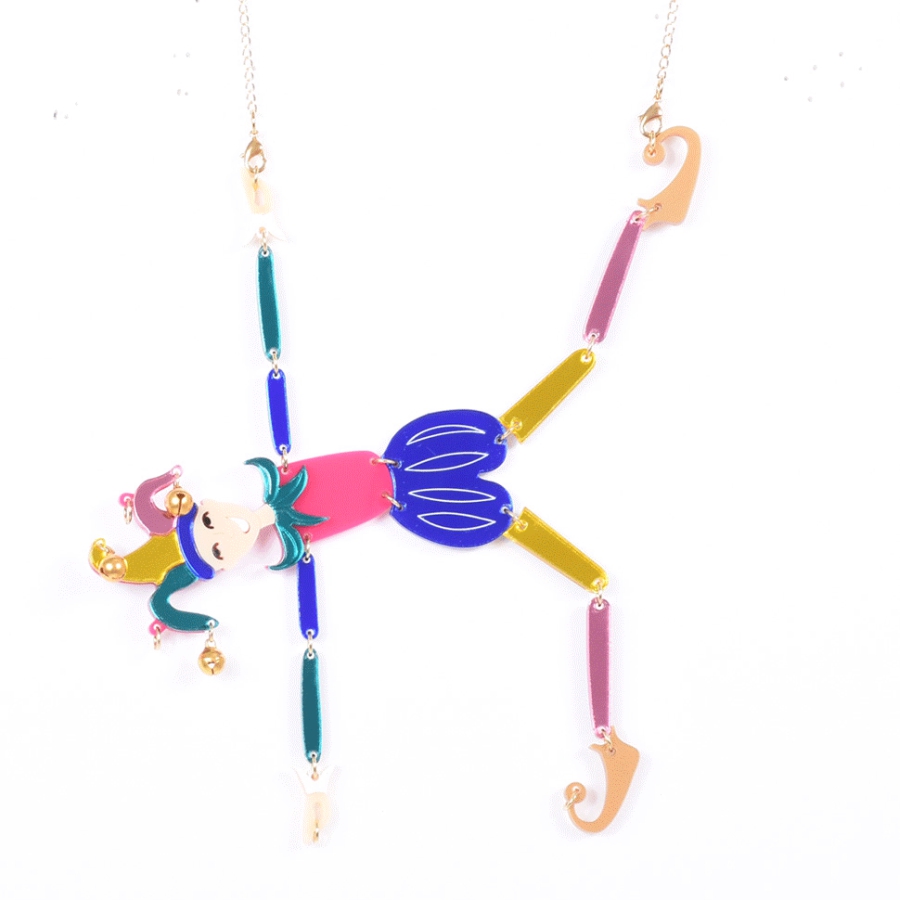 SH: How long does it generally take for a piece to be made?

BC & PN: It takes us a few days because the process is quite elaborate and thorough. First we come up with the ideas and we make the drafts, and from there we start selecting the most interesting ideas. After that, we focus on each piece, drawing it to detail, and then we digitize it. Later on, we run some tests on the materials to check if the sizes are right and the pieces are comfortable to wear. We then try the different color combinations and materials, which will give the final touches to the piece. Finally, we create the final piece that will be photographed and added to the website. 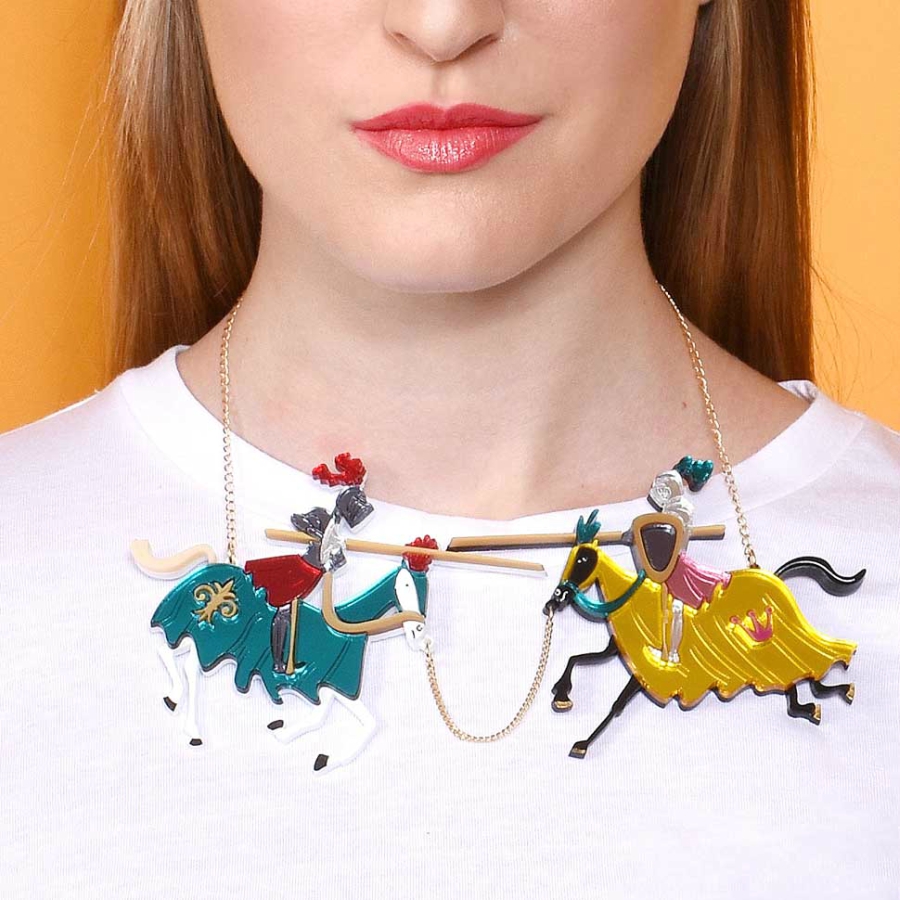 SH: What was the first jewelry design that really took off?

BC & PN: It was the Mixtape necklace, a design inspired by our childhood. When our favorite cassette tangled its tape, we had to turn the wheels to rewind it in order to continue to listen to our favorite music. 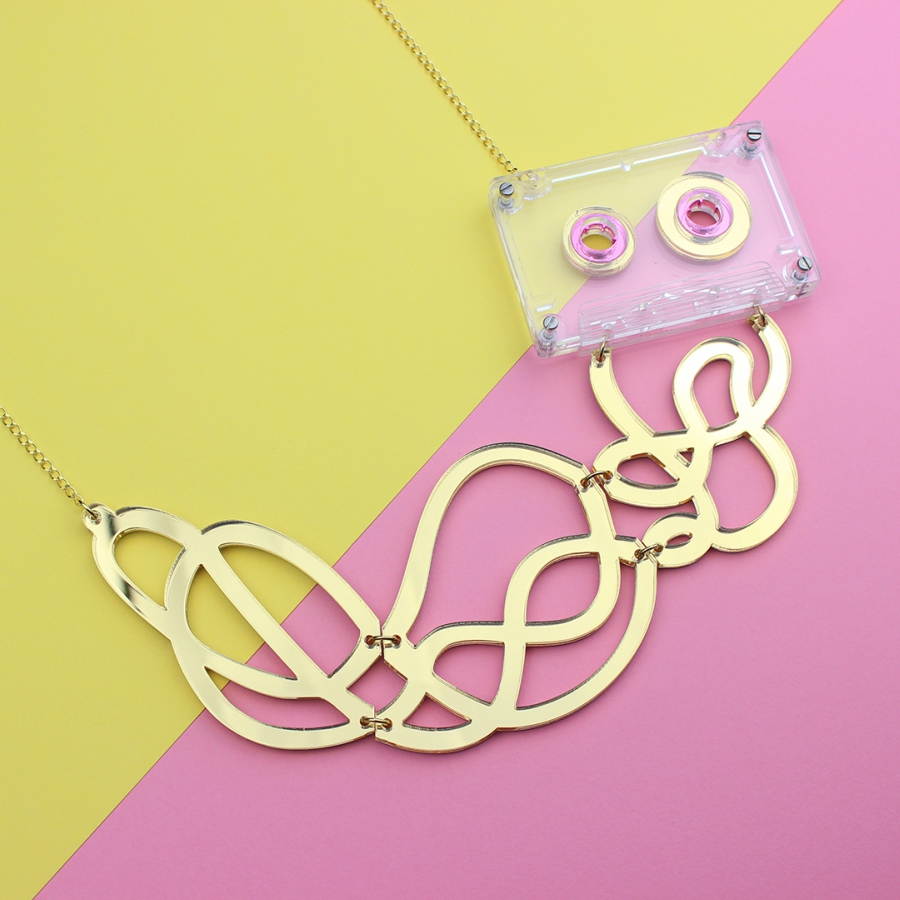 SH: Which design is the most popular?

BC & PN: The Palillos Sushi necklace. We designed it in two different versions: a tuna maki one and a nigiri salmon one. It was such a success around the world, we had to come up with other flavors due to the high demand. 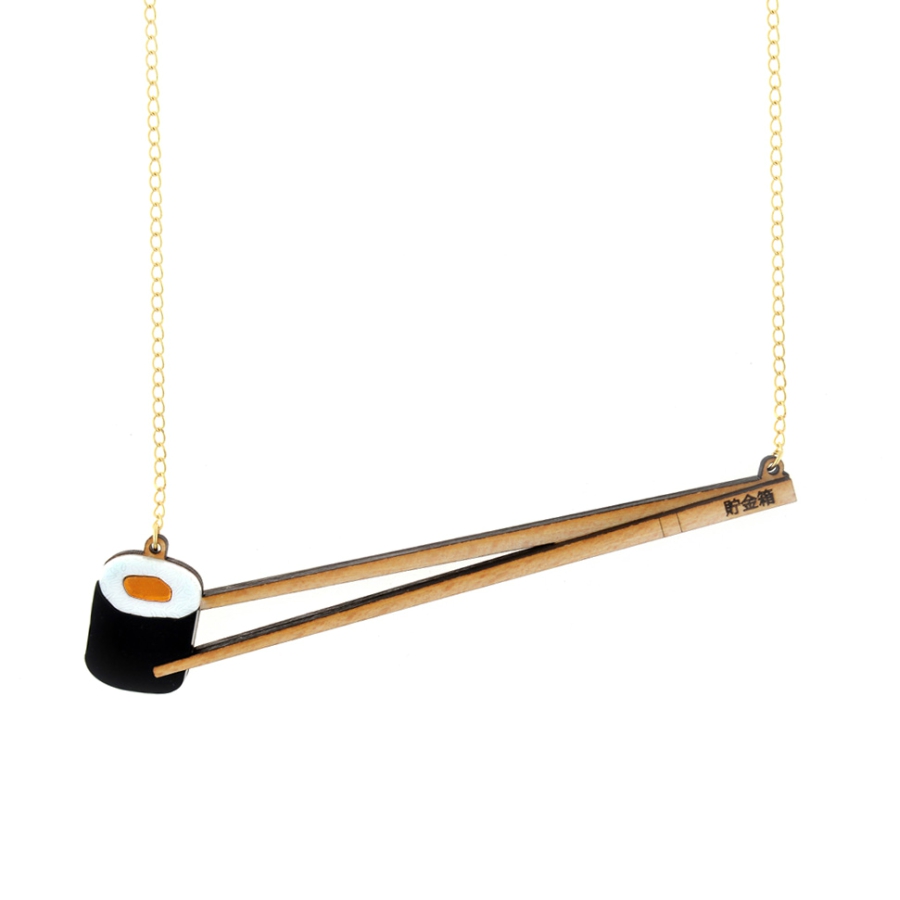 SH: Will you tell us a little bit about your new Christmas collection you just launched?

BC & PN: For this collection, we introduced new techniques, such as curving the acrylic to get very realistic Christmas balls, or adding lights to Rudolph's necklace to light up his red nose, which turns the pieces into something else. The latter is the first necklace that incorporates a light, but it is something we want to keep on experimenting with. We have also captured other Christmas traditions on our designs, such as the Christmas Tree on the car necklace. 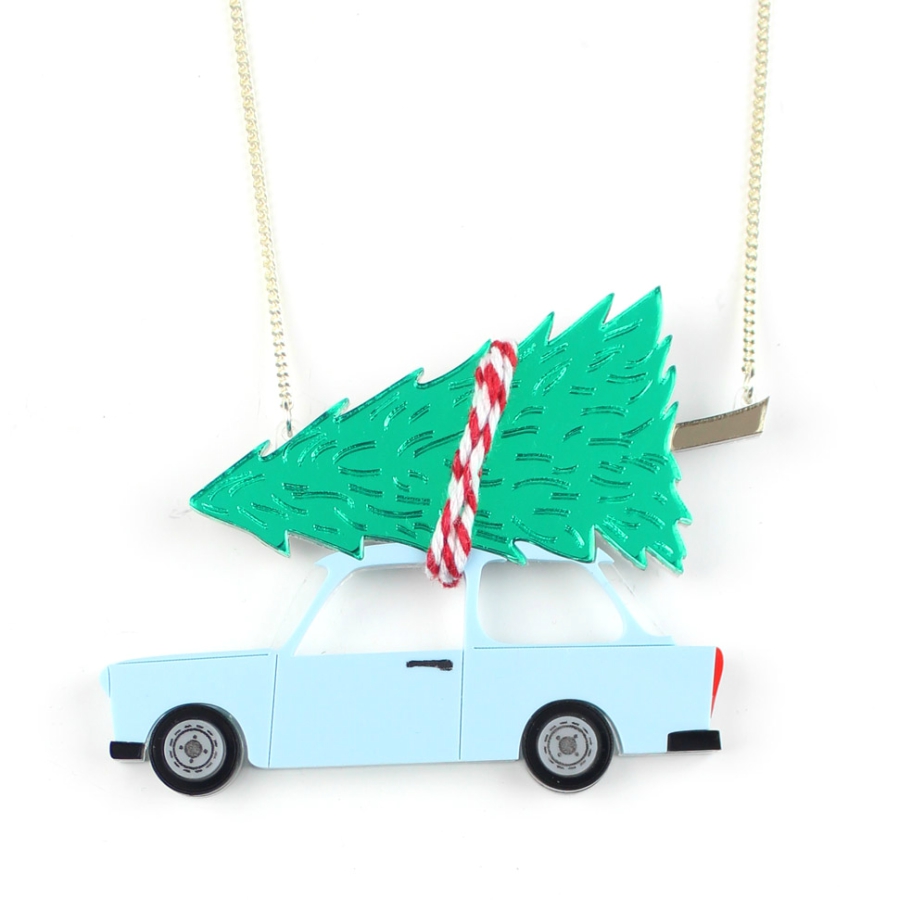 SH: What's your advice for girls who hope to create their own jewelry line someday?

BC & PN: At the start, it's not easy, but little by little you see the results, the customers' comments and the references in the media. All of that fills you up with happiness and energy to keep moving forward. It's a very creative job and very time consuming, but it is very thrilling and fun at the same time. If you like it, go for it and always enjoy your work! 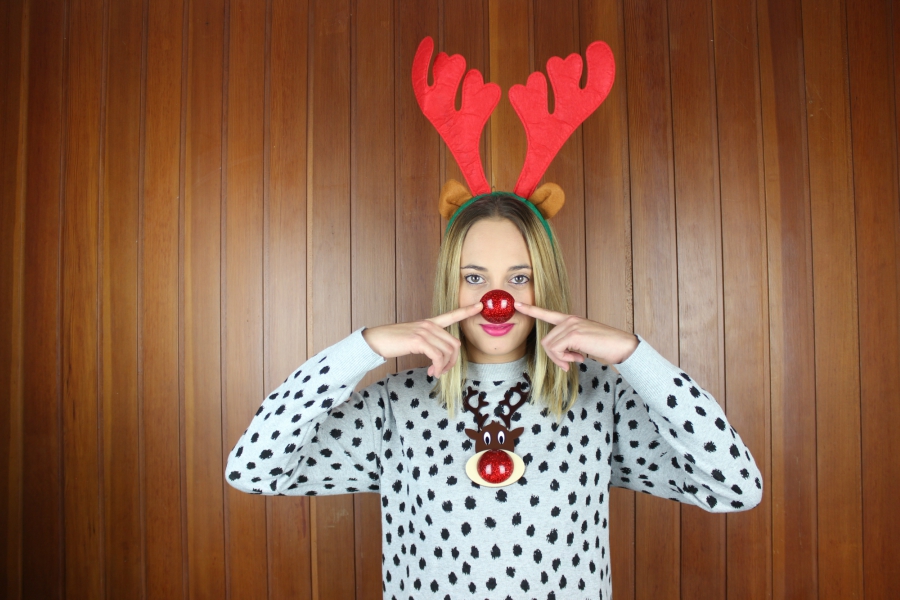 Speaking of accessories, need a new bag in your life? We suggest you check out THESE Disney-inspired clutches and backpacks, which are hand-painted by one very skilled artist.