BBC America's Doctor Who panel at San Diego Comic-Con 2018 was a big deal.

Firstly, it was the first time that the 13th Doctor, Jodie Whittaker, and two of her new companions, Tosin Cole and Mandip Gill, appeared together in public. Secondly, it's been months since the announcement of the new Doctor and we still know almost nothing about what the next season has in store for us.

Along with showrunner Chris Chibnall and executive producer Matt Strevens, the cast didn't reveal a ton, but they did say just enough to keep our little hearts satisfied until the new episodes this fall. Here are the most important things we learned.

More on the Doctor's Three Companions

Before heading into Comic-Con, we already knew that the 13th Doctor Will have three companions—Cole Tosin's Ryan, Mandip Gill's Yasmine and Bradley Walsh's Graham—though we didn't know anything about them.

Though the cast was coy about revealing too much, we did get a few insights into Yas' character.

"Yas is a 19-year-old girl from Sheffield. She enjoys her job but I guess she thinks she can do a little bit more. So she asks for a little bit more and she gets a little bit more, and she's whisked on this amazing adventure with these people who then become her family. She's in absolute awe of the Doctor. In truth, she always questions what she's doing—but she always goes along with it."

Not too much was revealed about Ryan and Graham, though it does seem that Ryan is more of a reluctant hero, and that Graham is the clown. We can't wait to see how they all work together when the new season airs this fall.

"It's fun as well because we've got three companions in this friendship group. It's an ensemble piece and that's really apparent when you're on set and in scenes and everyone's dynamic brings something new to the table, every scene, which is brilliant." 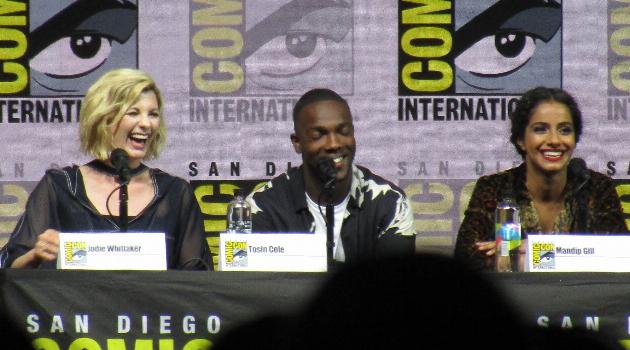 The Cast and Crew Are All About Secrecy This Season

The reason we have so few details on the next season of Doctor Who, according to the cast and writers, is that it'll make the show better for fans.

"It's really so we can get it to you guys, and everyone in the world, at the same time, all polished and all right and all exciting. I really love television when it's a new experience, and the more we can bring Doctor Who as a new experience, so you can have it unspoiled, at that time when we're ready to go to air, I think would be really awesome. I want you guys to all be talking about it at the same time. We have things you're not going to want to be spoiled for, frankly."

Mandip Gill compared the experience to going to see a movie and having the ending revealed to you in a trailer beforehand. The more fans are surprised, the more fun they'll have, so everyone has to remain pretty tight-lipped.

"You can't say anything about the show ever."

But Chris Chibnall said he also enjoys the back-and-forth with fans that this type of secrecy inspires.

"What we're getting a big kick out of is social media and everything else, and all the speculation about it. I think that's part of the fun, when fans are trying to sort out what they think we're doing. And we nick a lot of those ideas as well." 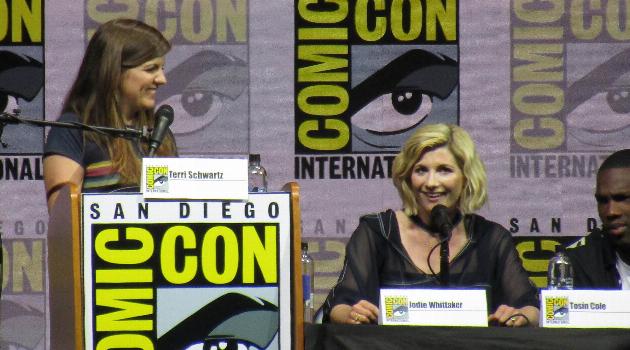 The Doctor Has a Brand New Sonic Screwdriver

We've always wanted a Sonic Screwdriver of our own, so we were extra excited when Jodie Whittaker pulled out a replica of her new tool from the show. It's got an odd design that we've never seen before, and we're already in love with it.

"It's made out of some interesting components, which you'll find out about in episode one. There is a story to how the Doctor comes by this Sonic Screwdriver"

Click HERE for even more on 13's Sonic Screwdriver. 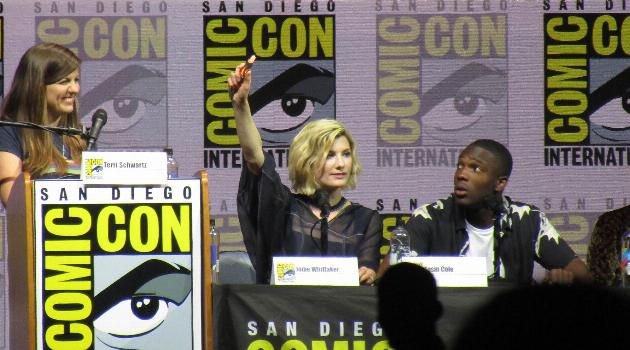 Of everything announced during the panel, we were most excited to find out about the 13th Doctor and what she'll really be like. Thankfully, the cast was all-too-willing to reveal their favorite character traits of the new Doctor.

"I feel like this Doctor requires a lot of energy. A lot of childish wonder… Quite fidgety. There's not a lot of stillness, I'm afraid."

"[The Doctor is] stern when she needs to be. She's bubbly, energetic, angry and playful."

"[She has] a joy for life. This Doctor is in love with life and keeps pushing for life and loving experiences, and treats everything with awe and wonder and respect. It's the joy that Jodie brings to the part." 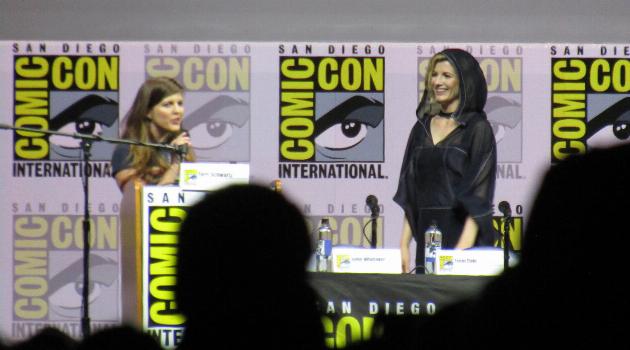 Seeing as the show started in 1963, there is a lot of Doctor Who out there, which can make getting into the show intimidating for new fans. Chris Chibnall says the new season will be something of a restart, and that if you don't watch the show yet, this will be the time to start.

"This year is the perfect jumping-on point for that person in your life who has never watched Doctor Who. I want you to go out there and recruit them and sit them down for their first episode…  There is no barrier to entry this year"

One main reason is that it won't require previous knowledge of the Doctor Who lore to really understand and enjoy it. There will be 10 episodes that are all stories that stand on their own, so you can really jump in at any time and not get lost in a big story arc.

"It's a big, inclusive, mainstream, accessible series of 10 varied, exciting standalone stories. You won't see very much from the past. There will be little things here and there—which you guys are going to spot because we have a lot of love and knowledge for the show, but as much as anything, our job is, where does the show go next? What are the surprises for us, as well as you?" 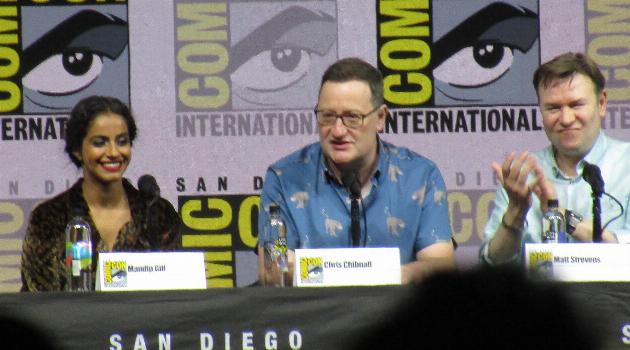 Not up to date on Doctor Who? Click HERE to see the big video revealing Jodie Whittaker as the 13th Doctor.