School has been back in session for a couple months now, you've got your eye on a cutie and you're finally ready to take the plunge and talk to them. But what do you say, text or do to get their attention?!

Let the mega-talented singer-songwriter, dancer and actor, Jordan Fisher, give you the answer to that.

We've called upon Jordan to be our love guru this week, and he's dishing to us everything from how to make a stellar first impression to the piece of dating advice his mom gave him that he'll always hold onto tightly.

Scroll below for some serious insight. 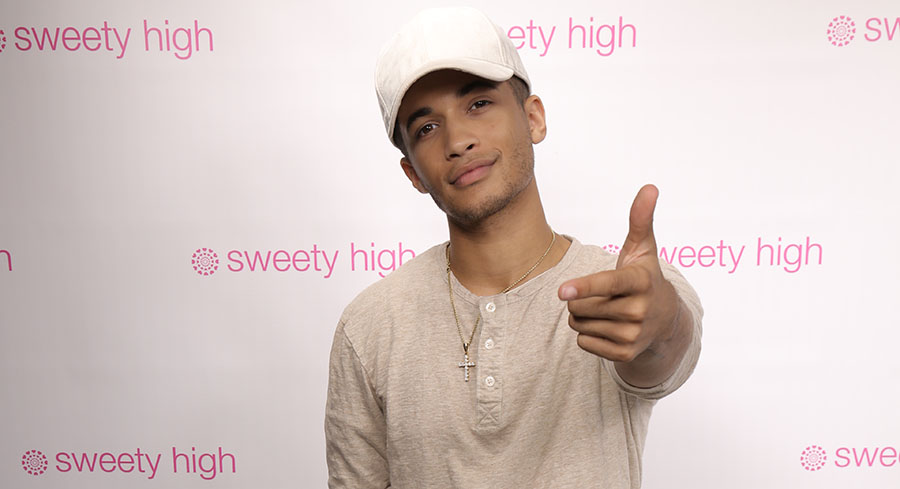 Sweety High: What is the best way for a girl to get noticed by a guy she likes?

Jordan Fisher: Guys typically like authenticity—that is the thing that I chase the most. It's very easy to feel that, smell that and see that, especially in the midst of a conversation. That's something that I look for in a girl. Like how real are they? Are they cool being goofy, are they cool just being transparent? And are they confident in themselves?

SH: On the flip side, what is the worst way for a girl to get noticed by a guy?

JF: I would mirror my response to the first question. Just being somebody who you're not. The biggest turnoffs, or one of the biggest turnoffs where dating is concerned, is that kind of vocal burn that a person can use—giving off that vibe that they're not impressed by you. You know they act like everything is a big deal, yet nothing is a big deal. I can't handle that in friendships or in relationships, whether they be platonic or romantic.

SH: How can you make a good first impression with your crush?

JF: I'm big on eye contact and I love a good conversation. That's one of my biggest turn-ons—being able to sit and have a conversation with somebody, talk about a bunch of different things and having that go on for a while.

SH: What are some major signs that a guy is into a girl?

JF: I guess how well and long they can hold a gaze with you. There's something very flattering on either side if you're in a conversation and you can both just look at each other and smile. There's something about it that's uncomfortable, but in a great way. That's definitely one of the biggest signs. Is he looking at you, and is he looking into your eyes?

SH: Do you recommend that a girl wait to be asked out by her crush, or do you think she should move forward and do the asking out herself?

JF: Chivalry is not dead, and I fully believe in that. I definitely think it should be a guy's job, especially the first time, to kinda be like, "Yeah, I like you. I'd love to get to know you better. Let's go to dinner together."

But sometimes, guys are oblivious to a girl's feelings, and I don't think it's a terrible thing if a girl calls and is like, "What are you doing, do you want to get a bite to eat?" Especially now in 2016, there's just a different type of social dynamic.

I think that there is a lack of control in how people perceive one another and how well you're perceived, and I think it's smart and cool if a girl is like, "Yeah I like you, I think you're cool!" It's totally flattering.

SH: What is the best text a girl can send her crush that will get him to respond?

JF: There are a few different phrases that I think would work. I think one that will elicit an immediate response in terms of how they feel about you is, "So what's your love like like right now?" or maybe even, "So, are you seeing anybody right now?" Very straightforward.

I've been asked that before by a girl I was interested in, and I was like, "Funny you should ask, I'm not seeing anyone right now, but I'm optimistic."

SH: What is the perfect one-liner that you could or would use to strike up a conversation with your crush?

JF: I don't think that a girl can negatively respond to, "You look really pretty today." Just compliment them.

SH: How much attention do guys actually pay to a girl's outfit, hair and makeup?

JF: Just move on. Don't wallow. It sucks being rejected, yeah. But I've been rejected by somebody and then years later had a relationship with them. It really is just timing sometimes. Either you have growing to do, or they have growing to do or it's just not the right time. Move on so you can grow and find something better.

SH: Where is a great place to go on a first date?

JF: A place where you can talk. Especially for the first date, don't make it too romantic, just get to know the person. Go to a place that is fun, open and there are social dynamics all over the place where you can draw inspiration from more conversations.

Talk and get to know the person, because, ultimately, you want to build a foundation for a relationship that's based off of dialogue and being able to connect emotionally.

The social dynamic thing is so vital in the beginning of it because you can put yourself in such a bind by going on a date where it's uncomfortable or a little too romantic. Don't get ahead of yourself, just ease into it! Go slow.

SH: Any last pieces of advice?

JF: Yeah, my mom taught me something that's stuck with me. Always leave people wanting more, do not show or play all of your cards on your first date… or even the second date. Build up, let there be something they want more of. So if by the end of the second date you haven't kissed them yet, by the time the third date rolls around, you'll get to it and it's going to be amazing because you've both been waiting for it.

Are you a tried-and-true Jordan Fisher fan? Prove yourself HERE by seeing how many of these seven Jordan fun facts you already knew!