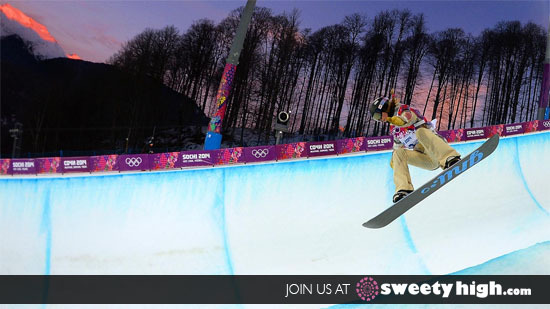 In snowboard halfpipe, competitors start at the top of the halfpipe to perform tricks in the air above the sides of the pipe.

Judges score the snowboarders based on how well they execute a difficult variety tricks, and how much air they get!

Gold medalist Kaitlyn Farrington is a 24-year-old snowboarder who lives in Salt Lake City, Utah. She competed in the European Winter X Games in 2010 and won the gold medal!

At the Winter Olympics, Kaitlyn Farrington dominated by performing a number of great tricks, including a backside 900 and two 720s, to score an impressive 91.75. The score won her the gold medal!

Ladies from the U.S. did very well in the category, with Americans Kelly Clark and Hannah Teter taking the bronze medal and fourth place respectively!

Join us at Sweety High and comment below to tell us about your favorite Olympic events and the girl power Olympians who take part! Also be sure to participate in our Gold Olympics contest here!