Karrie Martin is an up-and-coming actress who stars as Lindsey in tonight's episode of Pretty Little Liars! We spoke with Karrie to learn all about the new role, and about the events that led up to her start in show business! 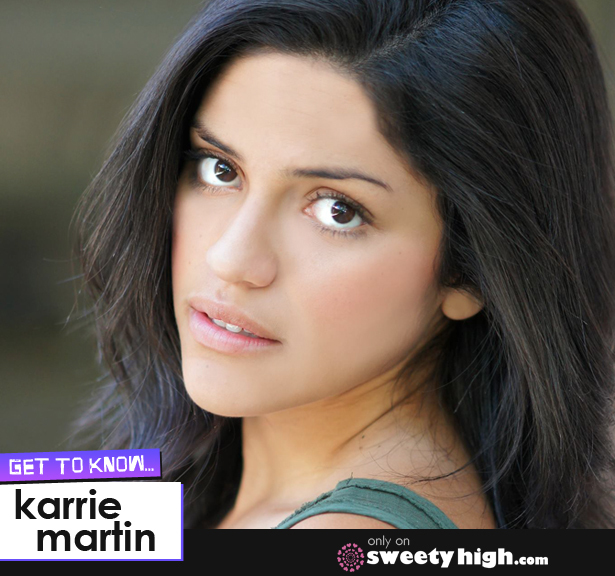 Karrie was halfway through college at Louisiana State University when she decided to make a change in her life.

"There were so many opportunities that I wasn't exploring in my life, and acting was one of them," she said.

Originally from a small town in Louisiana, just outside of New Orleans, the opportunity to become a big time actress wasn't obviously apparent to Karrie. Exposure to new ideas wanted her to pursue something more.

"In college I started taking a few acting classes outside of the university, just to see if I would like it and find out if it was just a crazy whim," she said. "I fell completely in love with it."

Her first job, prior to moving to L.A., was an extra job in the movie Battleship. She loved the experience so much that she decided to pursue acting full time.

Once she graduated, she auditioned for the John Robert Powers New Orleans performing arts academy.

"From there, everything happened very quickly," she said. "By January 2012, I was attending the iPOP, or International Presentation of Performers, convention in LA, and by May of that year, I was moving to Los Angeles with my sister."

In Los Angeles, she started acting in various web series, and acted in an indie movie called Apocalypse: The Movie, which comes out this year.

"It's about zombies, which is awesome," she said.

After that, Karrie started work on Pretty Little Liars as a new character named Lindsey. She appears in an episode called "Fresh Meat."

"That was possibly the greatest experience so far," she said. "It was humbling for me, because I'd been working really hard to get a step into the industry. To get that role was just a 'Thank god! I'm on the right track. I am where I'm supposed to be,' kind of feeling."

Her character, Lindsey, is a college student at a school that one of the main characters is visiting.

"I tour her around the school," Karrie explained. "We're supposed to be roommates that weekend, but a mystery occurs and changes plans."

Before nabbing the role, Karrie had never been a diehard fan of Pretty Little Liars.

"I knew about the series, and the whole mystery aspect of it," Karrie explained. "I had seen many episodes through the seasons, but I never kept up with it. It's kind of intense and scary, especially for ABC Family, and I'd never been into horror things."

But once she was cast in the show, she decided to go back and catch up.

"I've gone through all the seasons and I keep asking myself 'How do you not become a fan?'" she said.

As a viewer, Karrie had been a bit intimidated by the show. We asked her what it was like to actually be on set in the middle of the mystery!

"Filming typically starts later in the evening," Karrie said. "It makes it very real, and it's definitely got a certain vibe when everything's at night in the dark. Even the sets and locations are very gloomy."

But Karrie explained that, thankfully, her scenes haven't been particularly spooky.

"I'd read the whole script and gone to a table read with the cast so I knew what was going to happen," she said. "The intensity of that is really interesting, because even the cast doesn't know what is going to happen in the next episode. During the table read they were like 'Oh my god! No way! I can't believe this is happening!'"

She said it was an interesting experience to witness the dynamic of the continuing intrigue for episode to episode.

"My scene in particular was not so intense, but I did have a great experience either way," she said.

Last but not least, Karrie Martin wanted to remind fans that her latest success in the entertainment industry is not unique.

"My biggest thing is just everyone should follow their dreams," she said. "It takes time, but it's totally worth the process."

Be sure to catch Karrie Martin on tonight's episode of Pretty Little Liars, airing on ABC Family at 8/7c! And if you can't get enough of PLL, be sure to join our fan community at Sweety High!