Kaylin Stewart, who celebrates her 16th birthday today, is setting out to become the youngest-ever member of Bonneville's 200 MPH Club by setting a class land speed record! 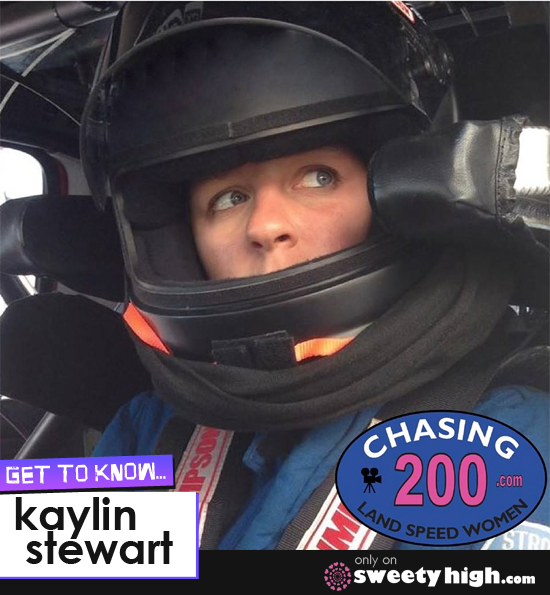 We recently spoke with the aspiring racer about her passion for racing and all of the steps involved, plus her documentary film about the women of Bonneville called Chasing 200!

Land speed racing on the Salt Flats of Bonneville was always in Kaylin's blood.

"Ever since I was little I watched my dad racing out of Bonneville and it was something I always wanted to do," Kaylin said.

She was just 5 when she told her dad that she wanted to race as soon as she turned 16. That would make her the youngest person in the Bonneville 200 MPH Club, AKA the 2 Club.

"Around that age I learned enough about the sport to realize it was something I wanted to do," she said.

Her dad encouraged her, but didn't know if she'd continue to be passionate about racing as she grew older.

"But I stuck with it," she said. "I worked on different cars, I did a lot of work with my dad guiding me."

Kaylin's dad taught her which people in the business would support and help her, and always motivated her and gave her as much advice as he could.

But a couple of years ago, he stopped going to Bonneville and stopped racing.

"When it came around that I might drive a truck, I kind of pulled him back into racing," Kaylin said. "I  said, 'This is what I want to do. Let's go do it.' He's been really supportive and a huge role model."

While many parents teach their teenaged kids how to drive, her experience with her father was a little different.

"He's teaching me how to drive on the road, but he's also giving me tips on how to drive safely at 200 miles per hour," she said.

In land speed racing, rather than racing against another person or vehicle, you're racing to get the highest speed.

As she set out to do when she was 5, Kaylin is now poised to become the youngest-ever member of the 2 Club.

During Kaylin's race, she'll drive a five-mile course, and each mile will be timed separately to calculate her speed.

"The goal is to break your class record," Kaylin explained. "If your class record is around 200, and you get a record over 200, you become a member of the 200 MPH Club. It's a pretty big deal."

Becoming a member of the club is a big cause for celebration at Bonneville.

"Everyone comes out and they bring you your red hat and your t-shirt," she explained. "It's a really big deal because it's not easy to go 200 MPH. It's a really special thing out there and it means a lot to a lot of people."

It preparation for her big race, Kaylin got her driver's permit as soon as she turned 15 1/2. She said she was intimidated by driving, at first.

"When you get your permit you can't drive until you've had a driver's lesson," Kaylin explained. "So the driving instructor comes and picks me up after school and we're driving on a road I've driven to and from school everyday for the past two years. I thought, 'I can do this, I can drive this road, I've been doing down it for two years, I can drive it.' And then he immediately makes me turn onto the freeway!"

This was Kaylin's first high-pressure driving experience, but she handled it well.

"I was freaking out, but I stayed calm and I did what he told me, so it worked out," she said. "It was intimidating at first, but as I got more comfortable with it, it made me feel more confident that I could race out of Bonneville."

Now, after nearly 6 months of practice, those things aren't on Kaylin's mind when she drives.

"I'm at the point where I can confidently drive on the street without being nervous about things, and I'm being able to focus and take in things around me," she said.

But finding out that there were so few women in the club only motivated Kaylin further. It also inspired the idea for a documentary film.

"It's made me more excited and made me feel like this is something I really had to do," she said. "Now I have to make this film and break this record. I have to tell other girls that they can do it."

Part of the problem, she said, is the way girls, particularly teenage girls, are taught to think.

"A lot of girls are in this mindset of, 'Well I can't do that,'" she said. "Teenage girls might put things off until they're adults, or think they can't do certain things because they're female, which means they can't do things that adult males do, but that's so untrue. You just need to start doing it now and start working on your goals."

Last year, Kaylin spent a week working on the track at Bonneville's Speed Week. Along the way, she took lots of photos and recorded a bunch of video footage. She decided on the drive home that she would edit together a film about Bonneville.

The discussion inspired Kaylin to want to make a film about all of the women who have raced at Bonneville.

"I got home and I got out my dad's 2 Club roster and I started reading through and I found every woman," Kaylin said. "I have two copies of this roster that are all marked up, highlighted and dogeared. I was shocked there were so few of them. I needed to tell their stories."

Kaylin reached out to as many of these women as she could via email and requested interviews. At that point, she wasn't sure if she was going to make a complete documentary film or just a web series, but she knew she needed to somehow tell their stories.

She started to get replies within six hours, and within a couple of weeks, she had gotten 11 responses from the 19 women she contacted.

"The first interview I did was with a woman who lives in the same town as I do," Kaylin said. "She has watched me grow up. I've known her forever and she's been a great mentor and role model to me my entire life, not just as a race car driver but as a strong, powerful woman."

Kaylin was extremely comfortable interviewing her close family friend. It was great practice for the rest of the interviews, which were not always so seamless.

"A couple days later, we packed my camera and my lighting and everything into our car and we drove out to Las Vegas to interview the very first women to get in the 2 Club, Marsha Holly," Kaylin said.

From her home on the coast of California, it was no short drive.

"She raced in the 70s and 80s, and then she kind of stopped racing, and not a lot of people who race now know her or remember her," Kaylin explained. "She's kind of become this recluse, but also a bit of a legend out there."

When Kaylin showed up and knocked on Holly's door, she wasn't exactly sure what to expect from the legendary racer.

"We knock on the door and she comes out, and we're chatting and she goes, 'You know, I really hate doing things like this,'" Kaylin said. "I was like, oh no! What's going to happen? But she said she thought my project was really amazing because this is an important story to tell, and because all of our stories are important to tell. She wanted to help preserve the stories and the history."

The experience helped to energize Kaylin further and gave her the courage to keep up the project. She's now interviewed seven women in person, on camera.

Kaylin had always wanted to direct. This opportunity brought all of her biggest passions together into one project.

Kaylin did theater for a couple of years, and had an agent and manager in Los Angeles. While she enjoyed auditioning for roles, she found it didn't always allow her to have artistic control.

"Being in front of the camera  or on the stage is fun. I love it. But as an actor you're only allowed so much creativity," Kaylin said. "Once you get the role, there's someone telling you how to act, where to stand, what character you are and what clothes you wear. There are  people telling you how to do each and every little thing. But I think that as a director, you're allowed so much creative freedom."

Kaylin wanted to paint her own picture onscreen, and make her stories her own.

"That's what attracted me toward directing," she said.

For similar reasons, Kaylin is also interested in being a producer. In college, she intends to get a degree in creative producing, which will open up opportunities not only as a producer or director, but also as a project manager.

The next step on the road toward Kaylin Stewart's record took place today, as it was Kaylin's 16th birthday!

She outlined her birthday plans for us.

"I'll go to the DMV and get my license first thing in the morning, and right after that I'm driving with my family to Bonneville in Utah," Kaylin told us.

There, she'll be driving a Nascar-style stock car in order to "license up" from her basic driver's license. After a series of passes in the stock car, first at 125 MPH, then 150, then 175, Kaylin will earn the B class competition license that will qualify her to race up to 200 miles per hour!

The next weekend, she'll attend the Bob Bondurant School of High Performance Driving in Arizona, where she'll take a 3-day high-performance driving course. After some time doing road courses and autocross racing to learn to be a better driver, the school will tailor her curriculum for land speed racing.

"A couple weeks after that, in August, is when I'll go out I'll make a couple of passes just to get comfortable on the track at a slightly lower speed," Kaylin said.

She'll make some rookie passes on the course at Bonneville Speed Week to demonstrate that she knows what she's doing before finally going for her record.

If her pass beats the record, Kaylin will go to impound, where her car will be checked to see that she's meeting all of the correct class specifications and everything is being done correctly.

"Then you have four hours to work on your car to get it race-ready," Kaylin said. "First thing the next morning we get up at 4am, we're out on the salt by 5, and we work on it until about 7 o' clock. Then I will make a second pass, again over the speed of the record."

If Kaylin can make two passes over the previous record of 219 MPH, her two speeds will be averaged together and the new record will be hers!

"I know all these things because I've done it so many times as a pit crew member," she said. "It's super cool doing it, whether you're a driver, part of the pit crew, an inspector or a starter. Any job really!"

We wish Kaylin the best of luck in her attempt to join the 200 Club on August 9! Check out the Chasing 200 social pages below to follow Kaylin on her journey, and join our community at SweetyHigh.com to share your favorite girl power stories with us!