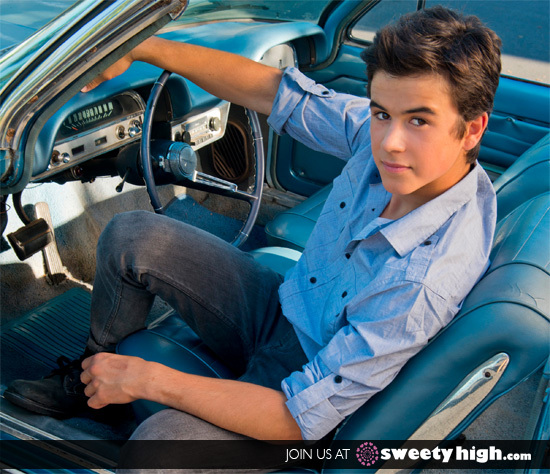 We chatted with Keean about how he first got into acting, and about the fateful events that led him to Spooksville!

Keean Johnson has been a dancer since he was 5 years old.

"It's just something I've always loved to do," Keean said. "After one dance competition, a lady called us and asked 'Would you like to audition for this Broadway musical called Billy Elliot?'"

Keean agreed without a moments' hesitation, even if he didn't know exactly what he was in for!

"I was completely excited to do that, not even thinking about how I'd have to act, sing, tap," Keean said. "I had no idea how to do any of those things. I went to the audition and I was super lucky to book the part."

During his rehearsals for Billy Elliot in New York, he fell in love with acting.

"It was such a fun of experience to be a different character," he explained. "I had to speak in a dialect, so I had a dialect coach, and I was really learning to act while rehearsing for this Broadway show."

"Spooksville just came out of the blue," Keean said. "I stumbled upon them and auditioned, and they gave me the role. The very first day on set was my first day of acting in front of a camera. It was kind of surreal."

"It's basically every genre," Keean said. "I don't know how that works, but we seemed to pull it off."

In Spooksville, Keean plays the role of Adam, whose mother disappears suddenly. Two years later, Adam's father George decides to relocate the family to a small town called Springville to get out of the city and begin a new life.

"It's been hard for the last two years, and Adam doesn't want to leave his home," Keean explained. "At first Adam thinks Springville is the most boring town in the world. There's nothing to do, it's a tiny school, and he's not really clicking there."

Before long, however, Adam learns that his sleepy new hometown is known by the locals as "Spooksville," and with good reason.

"It turns out it's not the best place to start a new life," Keean said. "It becomes this crazy adventure, figuring out all these weird, supernatural things that go on in the town to discover what's going on, because he figures out that maybe it has something to do with his mom. He tries to figure out the curse of Spooksville to find his mom."

Each new episode brings a new monster to the mix that Adam and his friends must vanquish.

"It's a less cheesy version of Scooby Doo," Keean said. "Every time in Scooby Doo when they went on a cool adventure to try to solve the mystery, they find out the monster that's attacking is usually someone in disguise. In Spooksville, that's not the case. There are actually monsters."

These monsters of the week include ghosts, robot creatures, zombies, aliens, fear-eaters and more.

"In the first episode we have this weird spider mixed with a slightly disgusting-looking lobster, called the arachnidon,"  Keean said. "We have a whole episode surrounding Bigfoot. We have everything."

While there is an story arc that flows through the episodes of Spooksville, each episode will also stand on its own and have something completely new to offer.

Keean added that the show is a blast to film, and said that filming usually lasts from 3pm in the afternoon until 1 or 2 in the morning.

"That was a fun process because you have all the crew members there, and it's super dark and super quiet," Keean said. "We film scary episodes. The first night shoot had these weird creatures with these blue eyes, and I spent the whole night running around acting scared. I ran for like 6 hours that day. It was such a fun shoot."

Keean also had the opportunity to present at the Hub Halloween Bash, which airs right before Spooksville on Hub Network.

"I walk in and see people's costumes and I couldn't believe the amount of time people put in," Keean said of the event. "It's crazy. There was this one Transformers character with green lasers shooting out of his hands and it was incredible.

"I got to go up onstage," he said, "The audience was wonderful, just to present and be a part of it was really fun, and I got to present an award with Kenan Thompson."

Make sure to tune in to Spooksville tomorrow night on Hub Network at 10pm, and follow Keean Johnson on Twitter @KeeanJohnson!

Can't wait to tune into Spooksville? Join us at Sweety High to share the latest updates on all of your favorite shows!