Keean Johnson is the star of the Hub Network's hit horror series Spooksville, which recently started its second season! 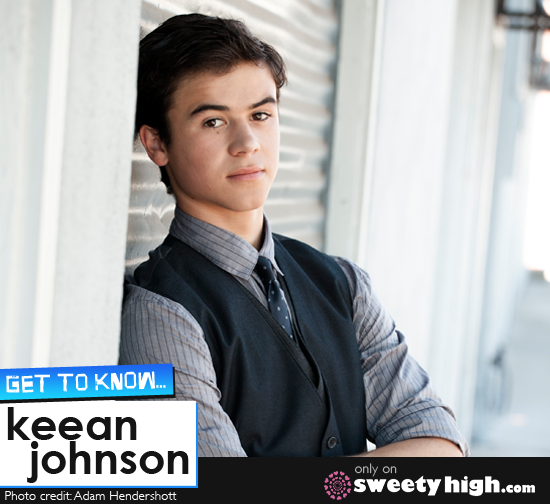 We recently spoke with the young actor about what fans can expect this time around and about why the show means so much to him. And be warned, if you haven't finished the first season yet, there are some spoilers ahead!

When Keean Johnson got the audition for Spooksville, he was totally unfamiliar with the series. At the time he was in England, and his granddad happened to have one of the Spooksville books on hand.

"I read it and just fell in love with the series," he said. "I was so happy to then audition for it."

Keean sent in his audition for the character of Adam on a Selftape, sent it in, and booked the role. Once he'd nabbed the part, he was incredibly curious about how the book series would translate to the small screen.

"In the script a number of supernatural things happen," he said. "With the amount of makeup and special effects that were needed, I really wondered how it was actually going to turn out."

But once he saw the final results, Keean was really happy with the work of the special and digital effects teams.

For example, in the first episode of the new season, Adam and his friends must thwart a massive pirate crab creature!

Much has changed for Adam and his friends since the beginning of the first season. In the climactic season finale, Adam finds out that his mom, who had disappeared and been assumed dead, is actually alive and well.

"The whole first season was Adam trying to find a way to find her, and at the end of the first season when Adam finally finds his mom, it was such a relief for him," Keean said. "When the second season starts he just wants to be a normal kid again."

But now that the mystery of his mother's disappearance has been solved, he must turn his focus to helping his friends Watch and Sally figure out the spooky secrets behind Spooksville.

"In the new season we really had to go into the aspect of figuring out what's going on with Spooksville, because there's not only ghosts or vampires or zombies, so we had to incorporate different creatures."

Keean was particularly impressed with some of the inventive new monsters created by writer Jim Krieg.

"There's one episode that revolves around the dentist's office," he said. "When you watch the episode you won't believe it. I don't know how Jim came up with this but it's so cool and I can't wait for everyone to see that episode."

Keean also said that if he had to fight monsters and solve mysteries in real life, he might have to do some prep first.

"I used to be able to run really fast, which would probably help," Keean said. "I don't know if I really can anymore, so I think the monsters would end up attacking me. I probably need to get back in shape."

He added that he is pretty fearless when it comes to climbing things.

"If there was a monster attacking me I think I'd be able to climb a tree or a building of some sort," he said.

Keean said that his filming experience on the set of Spooksville has been surreal. He started off as a dancer and began acting onstage before the transition to television.

"It was just an incredible journey starting onstage and coming to TV," he said. "It was so cool because they really want to help me and take me in. They don't just teach me about the acting aspects, they teach me about the directing and producing and the whole aspect of how it all is put together."

He has also been incredibly grateful for all of the new fans of the show.

"It truly is a show where there's nothing like it on television," Keean said. "It's kind of like bringing back The Goonies in a TV series, and it's really cool that the fans have taken it in and have really enjoyed it in a way that I didn't think was possible."

The whole cast have also been really pleasantly surprised with how well the fans of the show have responded.

"We're so happy that we have a great following of people coming back every Saturday and we just hope that we get more fans and hopefully we'll be able to go back for a third season," he said.

We wish Keean Johnson and the rest of the cast the biggest success in their second season! He will also be appearing in an upcoming episode of ABC's Nashville on March 26!

Follow Keean Johnson on Twitter @KeeanJohnson and join us at SweetyHigh.com to share all of your favorite Spooksville moments with us! You can also see our previous interview with Keean here!