We've been obsessed with Kelli Berglund since we first saw her in Lab Rats and we're beyond ready to see her kick major butt in Lab Rats: Elite Force. We sat down with Kelli for a fun little chat about exactly what we can expect from the new series, her fabulous fashion line and her feelings about actual rats! Her answer will definitely surprise you. 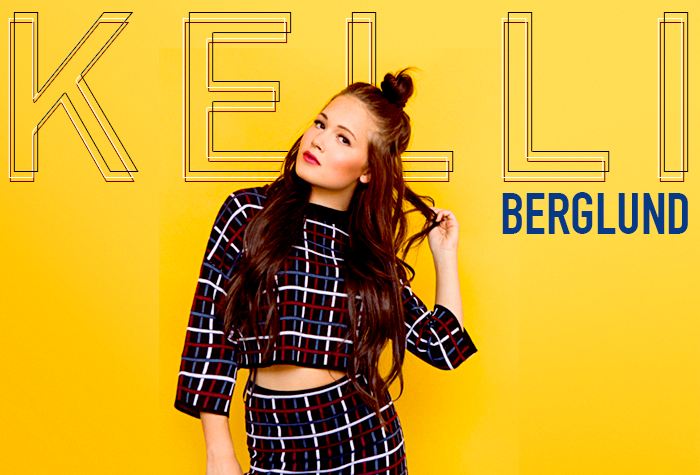 1. Which cartoon character do you relate to most?

I love all the characters on Phineas & Ferb, and I think I'm a mix between Candace, Phineas and Perry the Platypus.

2. Show us your fiercest ballerina pose!

3. What's the craziest stunt you've ever done on Lab Rats?

At the last minute, I had to wear a harness and all of us get blasted back by this force. Normally, for something like this they would have a stunt double, but they wanted me to do it. I basically was wearing a harness that had lines on either side of it and they lifted me up in the air and I had to do a back flip! I was so freaked out, and that was the first time I thought "I don't know if I can do this!" The first time I did it I psyched myself out and got my leg caught in the line.

Honestly, I think they're the cutest things ever. We did a promo shoot one time with a couple of rats that were actually dressed up like us. My rat had a little ponytail and they were very nice, they were groomed, they were still rats and I thought they were so cute.

5. If you could only keep one thing in your wardrobe, what would it be?

6. We CANNOT wait until December 5 to get our hands on your MUSE clothing collection! How would you describe it in 3 words?

7. What were your biggest inspirations for MUSE?

I remember being 15, 16 years old, and I would always see pictures of celebrities on the red carpet, or even just out, and they always look so good. I wanted to bring that to my audience of 15, 16 year-old girls who watch my show and are fans. I'd totally wear all these clothes! We have a lot of tailored looks that look they could be hundreds of dollars, but everything is going to be $80 and under, which I think is ideal. The VIP presale starts on Thursday and I'm so excited for everyone to finally see it!

My mom! Paris Berelc, because her and I now work together every single day and she's also one of my best friends; Olivia Holt; my best friend Kristen who is from my hometown, I met her through school years and years ago but she's still my best friend to this day; and my cat Jesse, the boy of the squad.

9. What's the last photo in your camera roll?

10. Which fictional character's wardrobe would you love to steal?

Cher from Clueless. She's fabulous and her style is just so cute, even her super valley '90s style has incorporated itself into a lot of styles nowadays.

11. What's on your nails right this second?

12. Which candy best sums up your personality?

13. What's one thing you think most fans don't know about you?

I recently became a Gray's Anatomy fanatic out of nowhere. I'm on season 3 on Netflix and right now I have like 20 more seasons to go, but that's my latest obsession. I'm pretty sure new episodes are still coming out, so I have so much time to enjoy it.

I tend to use the black and white filters a lot.

15. What's the most beautiful place you've ever visited?

16. What toppings do you get on your pizza?

Pepperoni, olives, sausage and then sometimes this garlic dipping sauce that's so addictive and super unhealthy for you and tastes like heaven. That's like a heart attack waiting to happen, but it's SO good!

17. Who's your biggest style inspo?

I've always really liked Demi Lovato's style. Every year her style evolves and I evolve with it. I love Cara Delevingne's style, too. I like that her style is a little bit edgy. She's a big inspiration for my own style, and for the line, as well.

18. Take a photo of your massive makeup collection!

19. We're so excited to see the worlds of Lab Rats and Mighty Med collide in Lab Rats: Elite Force! What's your favorite thing from Mighty Med that's coming to the new show?

Just super powers in general! it's kind of a joke on the show because Billy's character Chase is this super intelligent guy trying to find the meaning behind everything and he gets so frustrated because our bionic powers are based in science, whereas he just doesn't understand how [Mighty Med] superpowers exist.

20. What else can we look forward to in Elite Force?

There's a whole new dynamic with Mighty Med and Lab Rats being in the same world now. We kind of wanted to start off with a bang, something exciting because it's a very new concept for Disney XD and just Disney in general. We really want to make a good impression on everyone who's looking forward to it. There's a little bit more girl power. Now you have this new dynamic of Bree and Skylar working together and Bree taking on that big sister role to her.

Kelli told us the movie that ALWAYS makes her cry and we definitely agree with her answer! How about you?