Kelly Sue DeConnick is a comic book writer who started her career by writing English adaptations of existing Japanese and Korean comics in 2002. Since then, she's become a writer with Marvel and penned fantastic stories about female superheroes. 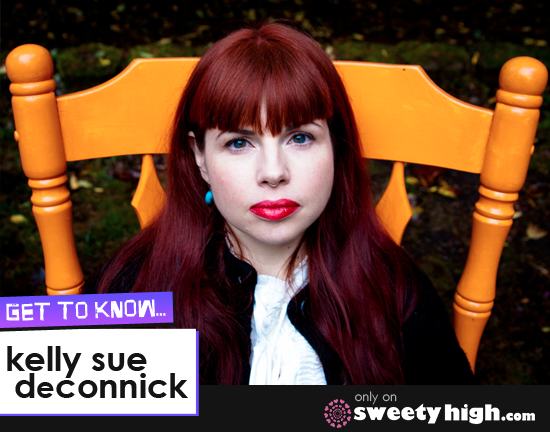 We recently spoke with DeConnick about everything from reading comics in her formative years to taking the helm of the Captain Marvel series.

Kelly Sue DeConnick spent part of her childhood on the Hahn Air Force Base in Germany. Her neighbors there were comic book collectors, and DeConnick was immediately drawn to the medium.

She started writing comics in 2002 adapting manga and Korean comics to English, and in 2009, DeConnick joined the team at massive comic book publisher Marvel Comics.

"Marvel was doing a special push to feature both female characters and creators," she explained. "I participated by writing two one-shots—centering on Rescue and Sif."

(You may know Rescue as the alter ego of Pepper Potts from the Iron Man series, while Sif is a female Asgardian warrior who fights alongside Thor.)

After working on those two stories, DeConnick decided to pitch a story about an existing character named Carol Danvers, AKA Ms. Marvel, to editor Steven Wacker.

Eventually, Wacker told her that she would not be working on a Ms. Marvel comic, but instead a comic that actually revamped Carol Danvers into the hero Captain Marvel.

Danvers' superhero outfit evolved from something like a one-piece bathing suit with thigh-high boots and long gloves into a more modest, full-bodied costume.

DeConnick was most interested in exploring Carol Danvers as a character because she's imperfect, yet powerful.

"I think Carol is relatable because she's flawed and forever pushing herself to do better," DeConnick said. "Few people can't relate to that."

She added that it continues to be crucial for women to be represented as powerful heroes. After all, while she was growing up, it never occurred to DeConnick that being a female fan of comic books set her apart from anyone.

"In superhero comics it's important because there is nothing inherently masculine about heroism," she said.

"In media in general it's important because when we don't don't portray groups of people, the message we send is 'you are other,'" she explained. "I don't like to use 'minority' to refer to women because woman are not a minority. We are 50% of the world's population and yet only 15% of the protagonists in last year's films! Yet we tell little girls they are plot devices in someone else's story. And that's bad for them and it's bad for us as a culture. As a culture, as an organism, it is bad for us. It limits women's potential, participation and contribution. On top of all that, it's bad business."

In the past, she's spoken in depth about why she thinks girl power is an underrepresented resource in the comic book world. It starts with the fact that money underlies the decisions made by publicly owned comic book companies.

The number of comic books published is based on sales figures from pre-sales. Sometimes, the books are scrapped altogether because there isn't enough interest. When comic book retailers aren't willing to take the risk investing in female-driven comic books, the comics have a tougher time getting made in the first place.

What they need is new people interested in female-led comic books, but it can be tough for new fans to get involved in that market without feeling out of place or intimidated at comic book stores.

She added that Japanese manga comics were largely soaked up by female audiences, partly because manga is available in malls rather than dedicated comic stores.

Her advice to get more of these comics made is simply to pre-order more comics with female leads. When the retailer gets a sale before the book even comes out, they might see that as an indicator that the book will sell, and pick up even more copies.

We asked DeConnick what she was personally doing to try to make the change happen.

"Being a woman and going to work every day?" she replied. "Writing a lot of women."

For young girls interested in getting into comic books, DeConnick had a few tips.

"Find a local comic shop and go check it out." You can also click here for help finding shops near you. "If they're not welcoming, don't give them your business. But most places are great and love a new reader."

As for particular titles, she suggests that readers use their own unique tastes to guide their foray into comics.

So why should girls be more interested in comics?

"That's like asking why girls should be interested in prose or movies," she said. "Comics are a medium, not a genre. There are comics for everyone because comics are just stories told in words and pictures. And stories are what bind us together as human beings. They're how we come to understand ourselves and each other."

For even more on Kelly Sue DeConnick, check out her social media pages below, and check out the Captain Marvel series at your local comic book store.