Kendall Schmidt may be best known from his work in Big Time Rush, but he's also the frontman of Heffron Drive, who released their debut album, Happy Mistakes, earlier this week! 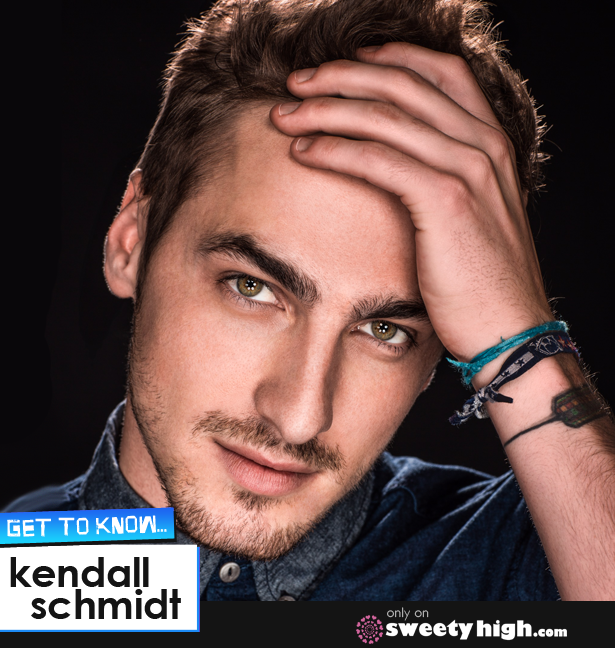 We recently caught up with Kendall to talk all about the happy mistakes leading up to the album!

Kendall and his Heffron Drive bandmate Dustin Belt first started making music together in 2008. When Kendall joined Big Time Rush in 2009, the band needed a guitarist, and Dustin fit the bill.

"He was my best friend already, but he became such good friends with everybody in the band and it just made sense for him to be around," Kendall said.

All these years later, Kendall and Dustin have finally gotten a chance to put out an album of something all their own.

"It's been a long time in the making, but we're still learning each other," Kendall said. "We've played a lot of shows together but it's new music. It's always a new process so it's fun on the tour. It's really come together and the songs translate live as much as they do on the recording."

The album, Happy Mistakes, released on September 9. The album shares its name with the opening track.

"I thought it was a really cool concept," Kendall said. "A lot of the album came together by a bunch of mistakes, and they ended up being happy ones."

Before the album release, the band decided that a simple album announcement wasn't for them. Instead, they realized they could generate even more buzz by having fans make use of clues to decipher the title.

"You always want to build anticipation, especially for something like a first album. It was fun, but I've actually gotten a lot of people saying it was way too difficult," Kendall laughed. "It worked but I think it was frustrating at the same time."

Kendall said that the Happy Mistakes album cover also came about in the form of a happy mistake. Fan participation was crucial yet again.

"I had a couple of ideas for album covers in the works and they didn't come into fruition the way that I had imagined them, so I couldn't in good conscience put them out," Kendall explained. "Ironically enough, at the same time we were running a contest for fans to design

special edition covers for the album."

While it came time for Kendall to peruse through the contest submissions, one design demanded his attention. The art featured two broken eggshell halves scattered about a raw egg, with a grinning smiley-face in the yolk.

"I thought it was brilliant," Kendall said. "She had this idea that was kind of abstract, but also self explanatory."

Kendall contacted the artist, Yvonne Bikejev, and the band bought the photo for use as the official album cover.

According to Kendall, love is a major theme throughout the new album.

Otherwise, Kendall just wanted Happy Mistakes to be about positivity.

"That was a big goal of mine," he said. "I think there's a lot of negative music in the world, and if it's not negative then just pointless music. It doesn't help anybody. I don't think there's anything on Happy Mistakes that would incite anything but positive feeling, whether it's thinking about love in some way or just feeling better about yourself."

Of all of the songs on the new album, Kendall said that he's proudest of the handful of tracks that he produced by himself at home. The production job finally gave him the opportunity to use some of the instruments he had been collecting for years.

"It's stuff that no one would ever really notice, but the bass line in 'Happy Mistakes' is on a Hofner, like Paul McCartney's bass, that I bought," Kendall said. "I did it myself. I'm not a bass player, but apparently I'm enough of a bass player to do a song. I hear that and I kind of chuckle."

Since the album hit store shelves and iTunes accounts everywhere on Tuesday, the reaction has been overwhelmingly positive. Kendall has been happy to see that the music is appealing to longtime fans and new initiates alike.

"The most important thing for me is I want the original fans to be really happy with the music," he said. I'm writing music for everyone. I want other people to get into it. I'm trying to write massive, but obviously I'm gearing toward the fan base that I already have."

Kendall and Dustin have also been debuting the new music for audiences on their Happy Mistakes Tour. While it's been exciting to play new tracks, Kendall said the process has taken some getting used to.

"First it was really weird because I didn't realize how much people singing your music adds to the experience," he said. "The first show where we played all the new stuff we had an acoustic soundcheck party and we played Happy Mistakes for the first time in front of people and no one was singing along."

At first, Kendall thought that he was playing for an unreceptive audience.

"I was kind of freaking out because I thought they didn't like it, but I realized it was just because they didn't know it," he said. "I definitely had to get used to that for a few shows, but they all figured it out."

Haven't snagged your own copy of Happy Mistakes yet? You can check it our on iTunes here!

To keep up with all of the latest news from Kendall Schmidt and Heffron Drive, be sure to follow him on his social channels below! Meet other Drivers in our community at Sweety High and check out our most recent interview with the band here!